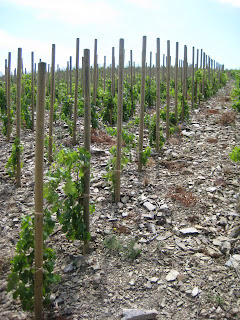 Newcomers to the Languedoc abound; they may come from overseas or from other parts of France. Pierre Gaillard is one of the leading names of Côte Rôtie in the northern Rhone and also one of the three partners of Vins de Vienne, the association that is reviving the lost vineyards of Seyssuel above Vienne. And not content with that, he has vineyards in Banyuls and an estate in Faugères. The vineyards in Faugères were originally planted by the three associates of Vins de Vienne, but since 2007 Pierre has owned them alone. He visits at least once a month, but in his absence the estate is run by young Arnaud Barthes. 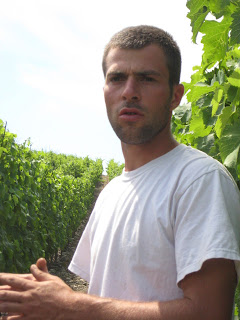 We met on a hot sunny day and Arnaud took us to see the sun-soaked vineyards. They bought garrigues and cleared the scrubland, so we admired steep, stony vineyards. The influence of the northern Rhône was very evident, with a very high density of 9000 plants per hectare, planted en echalas for the white varieties, with a single supporting post, while the Syrah, with its more fragile shoots is supported by wires. They have a total of ten hectares, with Syrah, Grenache Noir, Mourvèdre and Carignan for the reds, and Roussanne, Vermentino and Grenache Blanc for the whites. The vineyards are so steep that they need to work with a caterpillar, rather than a conventional tractor. Arnaud explained how they are paying attention to leaf area, in relation to yield. They are aiming for a yield of 30 hl/hl and normally you would calculate that one square metre of leaf area would ripen one kilo of grapes; instead they are aiming for two square metres. They leaf pluck on the side of the row that receives the morning sun and carry out a small green harvest in July. They also tend to pick later than is usual for Faugères, around 26th, rather than 10th – 15th September. 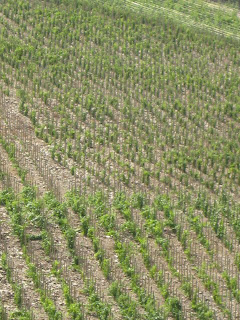 The cellar is a functional warehouse in the village of Laurens, acquired from a Burgundian, who had been producing Faugères, but no more. They vinify plot by small plot, with lots of small batches. Each variety is kept separately, with separate élevage in barrel. In 2006 just one wine was made, Transhumence, but in 2007 they added Parole de Berger, which is a selection of the ten best barrels from the steepest slopes. Arnaud explained the idea behind the names. Transhumence usually refers to the journey sheep take from one grazing pasture to another; Pierre Gaillard instead has travelled from one vineyard area to another, and the shepherd’s word, like the gentleman’s bond, is absolutely reliable.

Arnaud studied in Montpellier and has worked in New Zealand in Sherwood Estate in Canterbury, and also at Château Lastours in the Corbières. He has been in Faugères since the beginning of 2008, so did not make most of the wines that we were about to taste. However, his 2008 vat samples showed great potential, with ripe Grenache Noir; more structured Mourvèdre and some intensely perfumed Syrah. . He talked about pre-fermentation maceration in order to extract fruit rather than tannins; he does some pumping over and plunging down, and lets the temperature rise to 30º– 35ºC. The malolactic fermentation takes place in barrels and the wine stays in wood for 12 – 15 months. The Syrah usually goes into new wood, while older barrels work better for Grenache; and some of the wine is aged in vat. You sense a meticulous attention to detail in both cellar and vineyard.

2007 Faugères, Transhumence - 13€
A blend of 60% Syrah, 30% Grenache Noir and 10% Mourvèdre. 20% was aged in vat, and a quarter of the barriques were new. The oak was quite firm, with a touch of vanilla and on the palate the flavours are rounded and mouth filling, with lovely spicy notes. It is wonderfully rich, what the French call gourmand.

2007 Faugères, Parole du Berger – 18.00€
80% Syrah, 20% Mourvèdre, all aged in oak; 30% new. The colour is deep, and the nose redolent of vanilla, spice and coconut. The palate is more structured and also richer than Transhumence, with finer, more elegant flavour, and a slightly sweet finish. How will it age, I wondered? Both wines make for enjoyable drinking now, but may be they will have more to say in four or five years.
And projects for the future? A white wine, as the white vines are not yet in production; a new cellar of their own design. Maybe another red wine, and some more vineyards. This is definitely an estate to follow.
Email Post