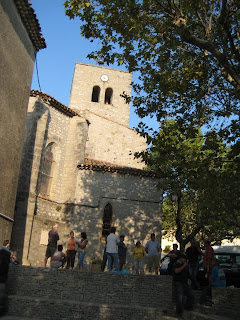 I almost embarrassed to admit that I had managed to work with wine for thirty-five years before I ever picked grapes. It was a big gap in my wine education, and an omission that I finally remedied a couple of years ago, thanks to our friend, Virgile Joly, a young wine grower in the village of St. Saturnin. Virgile hosts a grape picking day towards the end of each harvest, as a kind of harvest festival. He invites his friends for a morning in the vineyards; we are expected to work, but our reward is lunch, French style. Last time we escaped lightly, two hours, if that, of grape picking for a four hour lunch. This year things were a bit more serious, with rather more vines to tackle.
We were summoned to meet outside his old cellar in the village square of St Saturnin. It is well-placed between the church and the mairie, and a chalk sign above the door, tells you that he has been a vigneron since 2000. Most wine growers in St. Saturnin are members of the village cooperative, which demanded a fifty year commitment from its members, when it was founded in 1950. Consequently independent growers in the village are few and far between. We were bidden for 8.45 a.m; the British contingent took that to mean 9 a.m. so that we were still waiting for most of the French at 9.30 a.m. and we eventually made it out into the vineyard closer to 10 a.m. Our target was a block of old Grenache Noir, planted in 1972. The vines have thick gnarled trunks; some were laden with grapes; some had barely a bunch, let alone two. The grapes for the most part looked very healthy, with no sign of disease, but you could see the effects of the hot summer, with quite a few dehydrated and shrivelled grapes. We were firmly told not to pick the grapillons, the secondary, smaller bunches of grapes. But then Virgile’s sister-in-law, Martha, began to berate us for missing bunches. She is Polish, but has just completed a winemaker’s course. 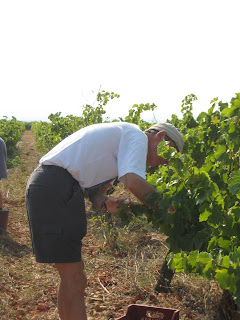 The morning passed, initially pleasantly, with gentle conversation as you went down the rows. Christopher Johnson-Gilbert, the latest newcomer to the wine scene of St. Saturnin, explained how he came to wine, after reading law at Oxford. He is still a lawyer, but wine is becoming a growing commitment, as he has bought 10 hectares of vines in the hills behind St. Saturnin, and is sharing a cellar with Virgile just outside the neighbouring village of Arboras. Virgile is thrilled by this arrangement as it means that they can share equipment and costs. 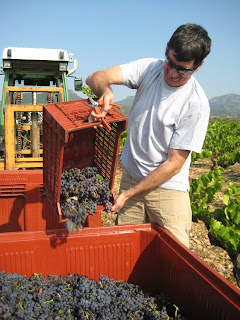 One of the hazards of grape picking is the possibility of snipping your own fingers or indeed the fingers of the person on the other side of the vine. Grapes bunches don’t just hang loose, so that you can see where to cut them. They have an irritating habit of intertwining their stalks. I managed to avoid damaging anybody’s fingers, but my husband self-inflicted two injuries, happily both fairly minor. However we learnt that a squeeze of sweet grape juice on the bleeding finger staunches the flow of blood; sugar is sticky and helps the blood to coagulate. How about that for an efficient old wives’ remedy?

There is also the natural temptation to sample a grape or two. These small Grenache grapes seemed beautifully ripe, with lovely sweet juice, but of course, rather tough skins. I was also surprised by the overwhelming aroma of fennel and aniseed - the vineyard was full of wild fennel plants, which gave off quite a heady scent if you crushed them underfoot.

French vineyard workers usually break for lunch at midday on the dot, but thanks to our collective tardiness, we were expected to carry on until we had finished the block. The midday sun was getting warmer; bottles of water were running out and the last row of vines seemed to stretch on for ever. And then secateurs were downed with a sigh of relief. And we adjourned to the new cellar in Arboras for refreshment. Never has a bottle of beer been so welcome. And I don’t usually drink beer. 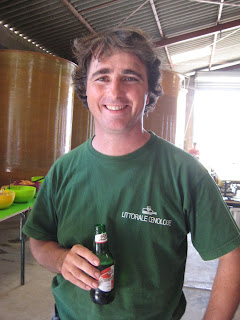 Back at the new cellar, revelling in the space, compared with the cramped conditions of the St. Saturnin cellar, Virgile was master-minding operations. The grapes arrived in large boxes on a trailer; the contents were emptied into the destemmer and the berries were vibrated along the table de trie, or sorting table, for the removal of any inferior grapes or bits of leaf or stalk. It was a surprisingly challenging operation; the grapes are sticky and the vibrations of the table de trie made me feel surprisingly seasick after more than a few moments concentration. 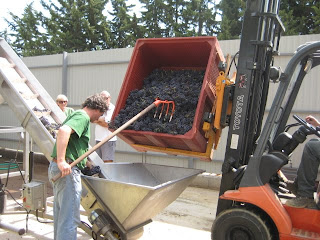 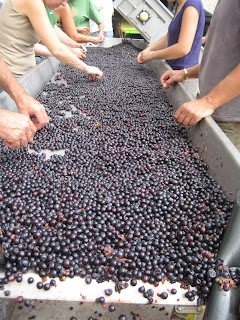 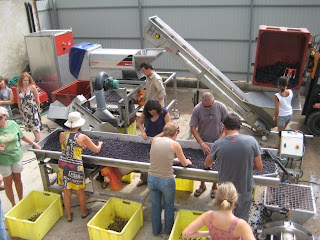 Meanwhile lunch was being prepared; an array of salads, while large hunks of beef were sizzling on the barbecue. And there was an opportunity for a quick update on current vintages. Virgile’s colleague, Jean Denoy, who does the sales – we had last met in Chablis - was cheerfully pouring large tasting samples;
2007 Saturne blanc Vin de Pays de l’Hérault - 11.00€
Pure Grenache blanc, and not a trace of oak. Fleurs blanches (or white flowers) and delicately satisfying herbal notes on the palate, and fresh acidity. Very elegant, especially on the finish.
2004 Virgile blanc, Vin de Pays de l’Hérault 21€
This is rather more serious, quite a rich oxidative style, with honeyed notes on the palate, but none the less with a dry finish and good acidity.
2007 Le Joly Rouge, Coteaux du Languedoc. 5€
This is Virgile’s entry level, a fresh cheerful easy to drink wine, from Grenache Noir, Cinsaut and Syrah. It has a fresh spiciness, some leathery notes and soft tannins, and makes a great barbecue wine when slightly chilled. Generous quantities would be consumed later.
2006 Saturne rouge, St. Saturnin, Coteaux du Languedoc - 13€
From Grenache Noir, Syrah, Carignan and Cinsaut, with élevage in vat, not barrel. This needed to breathe a bit, as it was quite closed and peppery, with a firm freshness and good fruit.
2003 Virgile rouge, St. Saturnin, Coteaux du Languedoc 29€
A barrel-aged blend of Grenache, Syrah and Carignan. Good deep colour. Quite a warm raisiny nose, from the effects of the heatwave vintage. The palate is firm and cedary, with some rich sturdy fruit and firm tannins. Youthful, but already drinking well. 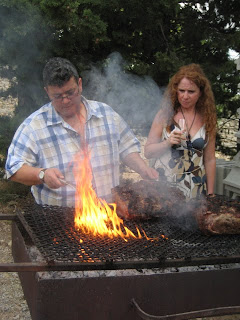 Leon Stolarski said…
That little fact about the 50 year commitment imposed on the members in 1950 is an interesting one, Rosemary. It explains why Jean-Pierre Cabanes did not begin making his own wine at Domaine d'Archimbaud until the 2001 vintage. If you haven't tasted the wines of Domaine d'Archimbaud, I can recommend them wholeheartedly (but then I would, wouldn't I)!

I have been quite impressed by your blog. I have myself returned to Pézenas after a long stay abroad. I eventually met an old friend of mine, a pharmacist from Marseille, who purchased a château in 2002 in Montredon Corbières. He had been living in Tahiti for more than 30 years before returning to Narbonne where in my opinion he produces very fine wines. I am actually writting a feature about his vineyard and wines that were rewarded gold and silver medals in Santiago de Chile in 2007. It would be interesting to get in touch with you. Please contact me anytime at pdalage@gmail.com. I write as a freelance writer and work now and then as a translator. My blog is http://dalage-patrice.blogspot.com/ Regards.
23 September 2009 at 16:47

AlanM said…
Rosemary. What a delight to find your blog. Your book was a constant companion during our three weeks in the Languedoc this summer, a real treasure trove. I hope that there will be a follow up or new work as we are already booked up for next summer and are smitten by the area. We visited Domaine Joly, after reading Patrick Moon's book, and enjoyed the wines though I preferred others such as Ollier Taillefer in Fos, a recommendation of yours.
11 October 2009 at 20:15