A DAY IN THE GARD

My Languedoc home is the Hérault, so the prospect of a day in the Gard was a bit of adventure. Our plan was to visit three wine growers, with estates south of the town of Anduze and the gateway to the Cévennes. We took the scenic route, past the dramatic landscape of the Pic St. Loup and Montagne de l’Hortus. A quick reviving coffee in Quissac, and then to our first appointment. 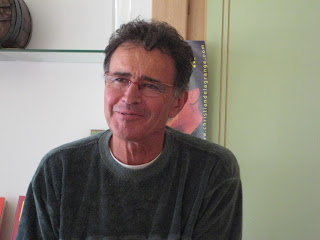 DOMAINE DE L’ORVIEL at St. Jean de Serres, with Jean-Pierre Cabane.
I‘ve met Jean-Pierre previously at the annual Salon des Vignerons Indépendants in Paris and have enjoyed his wines, but this was the first time that I had visited his cellar. It has to be said that he has a very smart tasting caveau, which welcomes visitors. Often there is an art exhibition, and this time there was an extraordinary sculpture at the entrance.. His spacious, modern cellar is underneath, to accommodate the production of 23 hectares. He grows a number of different grape varieties, Chardonnay, Sauvignon, Viognier, Grenache Blanc, Roussanne, Cabernet Sauvignon, Syrah, Grenache Noir, Merlot, Petit Verdot and Cinsaut. Upto the 1980s, there had been a bit of everything, including hybrids, but rationalisation came with replanting, after he inherited most of his vineyards from his grandfather in 1980. Until 2002 he was a member of the two nearby village cooperatives, but then it was the moment to go it alone. 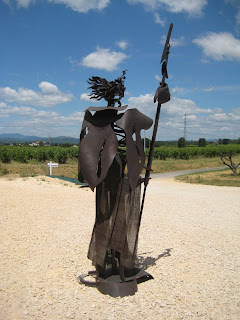 The local vin de pays for this part of the Gard is Duché d’Uzès. They are hoping for an appellation in 2010, or maybe even for this vintage, if they are lucky. The red will be based on Syrah and Grenache, just like the Coteaux du Languedoc, leaving the Bordeaux varieties for Vin de Pays d’Oc or Vin de Pays des Cévennes. The white varieties will be Viognier, Grenache Blanc, Marsanne and Roussanne.

Jean-Pierre treated us to an extensive tasting. For the most part I like his wines. They are elegant and understated, and finely crafted. Highlights included :
2008 Chardonnay, Vin de Pays d’Oc 5.50€

Light fruit on nose and palate, with fresh acidity. There’s a hint of oak to give some body, but it’s very nicely integrated.

2008 Sauvignon, Vin de Pays D’Oc – 5.00€
Good fresh fruit, with firm minerality on nose and palate. A really good example of a Midi Sauvignon. I liked this a lot, and I am not usually impressed by Sauvignon from the south.

2008 Les Trois Blancs Vin de Pays des Cévennes – 5.50 €
As the name implies, from three grape varieties, mostly Sauvignon, blended with some Viognier and Chardonnay. Quite a firm mineral Sauvignon nose, with some peachy fruit from the Viognier on the palate. The Chardonnay wasn’t particularly obvious, but I think it serves to link the other two varieties, and the wine works remarkably well.

2008 Vin de Pays du Duché d’Uzès. – 6.00€
Apparently there is a Duke of Uzès. This comes from 80 per cent Viognier, 8 per cent Roussanne and 12 per cent Grenache Blanc. You must have some Grenache Blanc in a white Duché d’Uzès. The three varieties are fermented together. Jean-Pierre considers that Viognier on its own would be too floral, whereas Roussanne adds some weight and the three varieties compliment each other, with some peachy, rounded fruit.

2008 Gris, Vin de Pays d’Oc - 4.50€
From Cinsaut and Grenache. A pale colour, resulting from a short time in contact with the skins before pressing, The palate is delicate too, with fresh acidity and light fruit.

2008 Le Petit Verdot, Vin de Pays des Cévennes – 5.50€
This is the last variety to be picked. It was quite firm and peppery with some leathery notes and a firm streak of tannin, and hints of liquorice, but also a slightly green note. Aged only in a concrete vat, with no wood

2007 Cuvée de l’Arche, Vin de Pays d’Oc – 5€
A blend of Cabernet Sauvignon, Syrah, Grenache Noir, with Merlot the dominant variety. They are all blended together at the end of the fermentation. This was eminently easy to drink, with some rounded fruit. It was soft and harmonious without being jammy.

2007 Vin de Pays du Duché d’Uzès – 6.00€
Syrah dominant with some Grenache, and aged in vat. Quite firm, dry spicy fruit on the nose, with appealing peppery fruit on the palate. Medium weight.

And then onto late harvest wines, with:

2006 Barriques Oubliées, Vendange Tardive Vin de Pays d’Oc - 12.00€
A blend of Sauvignon, Chardonnay and Viognier made from grapes that are either raisined or passerillé on the vine, or that have developed noble rot, picked in late October. The colour is lightly golden and the palate has some dry honey with balancing acidity. It is very intriguing, leaving you wondering, and wanting a second glass. With just 14 gm/l residual sugar remaining, it is not really a dessert wine, but you could drink it at the end of a meal, instead of a pudding.

We finished with Orvieux de l’Orviel – 13.00€, also a Vendange Tardive, with 40 gm/l residual sugar. Jean-Pierre made just 600 bottles of this from one hectare of Chardonnay and Viognier with a yield of 10 hl/ha. It was fermented very slowly and then spent three years in wood. Again it is very intriguing, with a biscuit honeyed note, some acidity and a dry and sweet finish. It is a vin de table, and without a vintage date.

After that we thought we deserved lunch and adjourned to the cheerful village restaurant in the centre of St. Jean de Serres, which came up trumps with a copious salade niçoise and a coup de rosé in the sunshine. 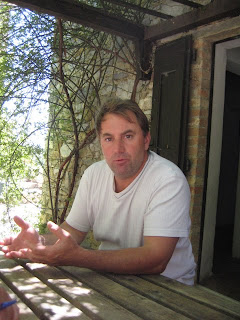 Our next stop was DOMAINE ORENIA with Philippe Nusswitz outside the village of Durfort. He hails from Alsace and arrived here in 2002, after working for Seagram’s in Canada. He knew that the Languedoc was the place for him; the vines are cheapest; the potential enormous and the climate is great. He looked between Nîmes and Carcassonne, dismissing some areas for too much wind. Aniane, Montpeyroux or the Pic St. Loup attracted him initially, and he lived in St. Mathieu de Tréviers, close to the Pic St. Loup, for twelve months, but found it a very closed community ‘like an oyster’ and there was nothing for sale. And then chance brought him to this corner of the Gard and he fell in love with the old mas that he has bought for chambres d’hôtes. He also realised that there was great wine potential, although there were very few independent growers here. His first proper vintage was 2004. 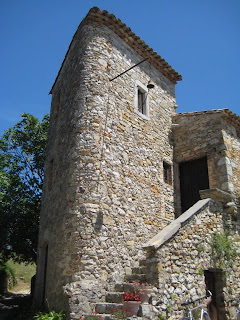 His cellar belongs to an old château at Vibrac. It was abandoned when the local cooperative was created, and still has the enormous concrete vats and an earth floor. Once the building would have been used for rearing silk worms, for Durfort was an important centre of the silk worm industry. He has open top concrete vats for fermentation; they are as wide as they are high, and he uses natural yeast, with several pigeages and favours a long maceration, and then uses a basket press. “The less I do, the better the wine” describes his wine-making philosophy. 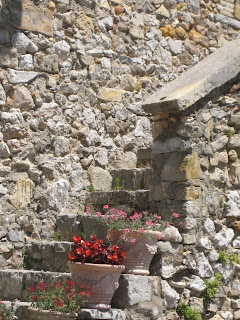 All his wines are Vin de Pays du Duché d’Uzès.
We tasted :

2008 Orénia blanc – 7.00€
Mainly Viognier, with Roussanne, Marsanne and Grenache Blanc. Philippe explained that you have the bitterness of the Marsanne and the rondeur of the Viognier. I found some peachy notes, with good weight and a rounded palate, balanced with some acidity and a ripe finish

2007 Orénia rouge – 6.00€
From Syrah blended with 20 per cent Grenache Noir, and no oak. Some spicy fruit, supple tannins and medium weight body, and an appealing freshness. Philippe explained that here in the foothills of the Cévennes, you get cool nights, when the days are as hot as 30ºC. He was looking for a vin gourmand and 2007 was a rich vintage.

He also made a 2007 Orénia réserve 9.00 € with a firm spicy, leathery nose and ripe black fruit on the palate. It was quite rich and layered with supple tannins and liquorice fruit.

Then we went on to:
2006 Miratus, which comes from his own vineyards. It is a blend of 60 per cent Syrah, 20 per cent Grenache Noir and 20 per cent Mourvèdre, blended when Philippe feels like it. There are no rules. He keeps some back so that he can fine tune the blend six months before bottling and the wine spends twelve months in wood. There was lots of black fruit, blackberries, blackcurrant and cherries, with the herbs of the garrigues and some fine tannins, and a rich, but quite alcoholic finish. The ageing potential is promising.

And Miratus blanc 2008 was a blend of Roussanne, Marsanne, Grenache blanc and a little Vermentino that have been aged in oak. There was good acidity and some nicely textured fruit and oak on the palate.

Philippe’s enthusiasm was palpable. He has a need to create – ‘ça m’amuse; you can be a pioneer in this region. There is total liberty here.’

And from there we went on to PUECHCAMP, a small estate lost in the byways around the village of Vabres, and off very much of the beaten track. The name translates literally as the field on the mountain, or le champ sur le montagne. Daniel Faure gave us a warm welcome. He is another wine grower whose wines I have enjoyed at the Salon des Vignerons Indépendents in Paris. 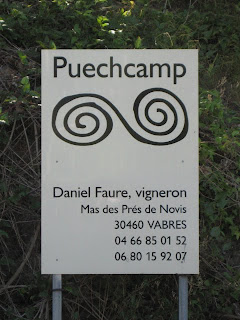 His first career was freelance photography, but he wanted to return to his roots with a house in the country. And the house came with five hectares of vines, planted with Syrah, Grenache, Cinsaut and for whites, Viognier, Roussanne, Vermentino and Grenache blanc. 2001 was his first vintage.

Two of his wines are Duché d’Uzès and all the rest Vin de Pays des Cévennes; he is more phlegmatic about the potential appellation – on verra. 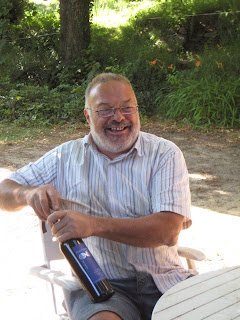 Our tasting began with 2007 Fontanalbe, Vin de Pays des Cévennes - 6.90€
It is a blend of Grenache noir and Cinsaut, with some lovely, spicy red fruit, a hint of nutmeg, with supple tannins. The suggestion was to drink it slightly chilled.

2007 La Vigne de Gaspard, recalling a great-uncle Vin de Pays de Cévennes 8.90€
A blend of 80 per cent Cinsaut and 20 per cent Grenache Noir. It is Vin de Pays des Cévennes, as there is too much Cinsaut for anything else, but Daniel loves Cinsaut, so this is not a problem. If the yield is low, it makes lovely wine, with fruit and spice and supple tannins.

2006 Gasparissime – 10.50€
60 per cent Cinsaut, 30 per cent Grenache and 10 per cent Syrah, and like the previous two wines, not a hint of oak. With a deep colour and dry spice and a touch viandé on the nose. With rounded spice and quite powerful flavours on the palate, with an elegant finish.

2006 Antarès. Duché d’Uzès - 14€
70 per cent Syrah, with 30 per cent Grenache, given eighteen months élevage in oak, but no new oak. The oak is nicely integrated, with a touch of coconut. There was more depth and structure, so that the wine was powerful, but retained its elegance, with a long finish.

And we finished with 2004 Galaad, Vin de Pays des Cévennes. -20.00€
This first vintage of this cuvée was 85% Syrah with 15% Grenache Noir, with some intensive fruit and good tannins and plenty of personality. With the 2007 vintage, it is virtually pure Syrah, and a Vin de Pays du Duché d’Uzès. We tasted a barrel sample so the oak was still quite obvious, with some firm leathery fruit and structured tannins. It will be bottled before the end of the year. 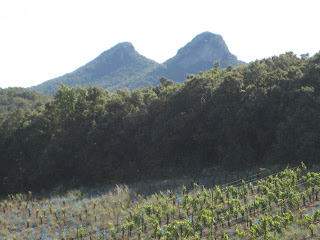 Before leaving, we had a quick look at Daniel’s vineyards, in the middle of garrigues, near the village of Monoblet, enjoying views of the Pic St. Loup and the Montagne de l’Hortus. The soil was deep red, and very stony; the 60 year old Cinsaut looks magnificent and the noise of the crickets was deafening.
Email Post