A MORNING IN PUGLIA with Rivera

We spent the morning with Sebastiano de Corato from the wine estate of Rivera, which is situated north of Bari, outside the town of Andria. But first of all Sebastiano took us to see Castel del Monte, the 13th century castle, which gives its name to the local DOC. He made a remarkably well informed guide, talking eloquently about the 13th century castle, which was built by the Holy Roman Emperor, Frederick II, not to defend anything, but to assert his authority. It can only be described as dramatic and awe-inspiring, especially with the white stone reflecting against the brilliant blue sky of a bright autumnal morning. It was almost dazzling. 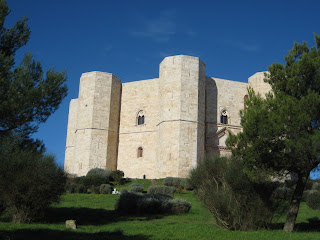 Some of Sebastiano’s vineyards are nearby. He explained how there used to be lots of Bombino Nero in the area, which was used for rosato, but that was pulled up in the 1970s, and wheat was planted instead; there is enough water for a winter crop. At the beginning of the 20th century the region was also important for sheep, and we did indeed meet a shepherd with his flock. 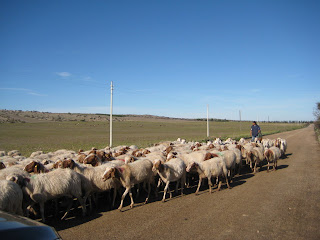 And the other important crop is olive oil. Olive trees are grown all over Puglia, but the olive oil industry is fraught with malpractices. The only way that you can be sure that an olive oil is genuine is for the label to bear a DOP, which states exactly where it comes from. Produce of Italy could mean Moroccan olives crushed in Italy, or oil from the EU blended with 1% Puglian oil. He also talked of Turkish nut oil miraculously transforming itself into olive oil mid-Mediterranean. The Italians have simply failed to defend their position in Brussels.

Puglia does not have the hills of Calabria; the countryside is quite different. There are groves of olive trees, almost as far as the eye can see, and vineyards – a dramatic sight of a flock of black starlings on their way to Africa flying over red leafed vines – and then there is scrub land, which is scattered with little casette, or small trulli, the stone houses that look like igloos, that are traditional to the area. Although people farmed, they lived in towns and came out to the countryside to work, staying for a few days in a casetta. 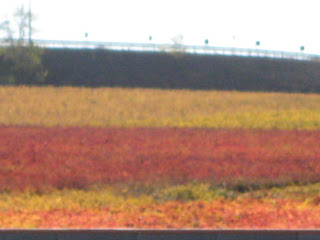 And back at the cellar, Sebastiano explained that Rivera is the name of the estate. It was originally 800 hectares and was bought by his great grandfather. There were some vines and olive trees, but it was mainly pasture for sheep. His grandfather was the youngest of eleven children. When he criticised his older brother’s inability to manage his vines, he was given the property. This was back in 1946, and his grandfather set to work to develop the brand of Rivera. At this time all Puglian wine was sold sfuso, in bulk, and it had an image for high alcohol, though in fact the rosato was usually only about 10.5º. In the 1960s the rosato became very fashionable; they have a photograph of Liz Taylor and Richard Burton drinking a bottle of Rivera rosato on the Via Veneto in Rome, and it featured in a film with Sophia Loren.


Sebastiano also gave us a very good overview of Puglian viticulture, explaining that the region is 400 kilometres long but only 50 kilometres wide, so that most of the vineyards are relatively close to the sea. The Adriatic is not very deep so that it does not have much effect on temperatures, but it does bring wind. The north wind cools in summer and brings snow in winter. Winters are much cooler in northern Puglia than at the bottom of the heel. You can divide the region into three, each with its own indigenous grape variety. Salento is the place for Negro Amaro, Primitivo is grown around Manduria and Gioa delle Colle, and in the north, where we were, Nero di Troia, or Uva di Troia, is the key variety. You will also find Aglianico as the Basilicata is nearby, and Montepulciano is used in blends, as it grows from the Marche down to Puglia. In the south Primitivo and Negro Amaro ripen early, during the hottest part of the year, whereas in sharp contrast the grape varieties of northern Puglia are late ripening, specially Nero di Troia. Montepulciano is usually picked at the end of September, Aglianico at the beginning of October, and Nero di Troia as late as late October, so that the harvest takes place two months later than at the foot of Puglia. The grapes are still unripe during the heat of summer, and the wines have lower alcohol and higher acidity than those of the south. 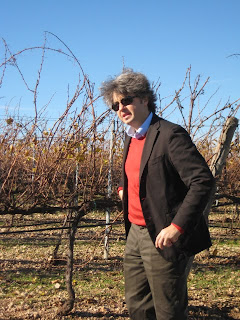 The DOC of Castel del Monte covers red, white and pink. With its long coast line white wine is important in Puglia, to accompany the wealth of seafood. Sebastiano’s father, Carlo, introduced international varieties some thirty years ago, planting Chardonnay, Sauvignon andSebastiano observed how Chardonnay lacks acidity; this year it was picked on 12th August, as opposed to 20th September for Bombino bianco.

We were treated to a comprehensive tasting, finishing with a vertical tasting of Il Falcone, the wine that really established the reputation of Rivera.

2009 Marese, Bombino Bianco – 6.00€
Light and delicate, quite fresh, simple and innocuous. Great with seafood, and reminded me of Picpoul de Pinet.

2009 Pungirosa, a rosato made from Bombino Nero. 6./50€
Soft strawberry nose. Fresh acidity; very crisp dry raspberry fruit and good acidity. Really tastes of a cooler climate. Bombino Nero has low sugar and high acidity, and is rather thin-skinned and therefore used for rosato rather than for red wine.

2006 Violante, Nero di Troia – 7.00€
Medium colour; quite a perfumed nose. Some dry fruit with a touch of spice. Quite firm tannins. They are working on clonal selection for Nero di Troia with Attilio Scienza, the leading ampelographer of Italy, and professor at the University of Milan. Nero di Troia has big berries; it is a tannic variety with a lot of juice, and they are looking for selections of old clones with smaller berries. With Violante they aim for an easier style; the wine has spent twelve month in tank and there is no oak. They want their wines to be fresh and drinkable – acidity is the key.

2005 Cappellaccio Castel del Monte. This is made from Aglianico; Monte Vulture where Aglianico is at its best is only 30 kilometres away as the crow flies. However, the soil is quite different, volcanic limestone, whereas at Castel del Monte the limestone has marine origins, with shells. The nose was quite perfumed, with certain warmth. It is in French oak, which was nicely integrated.

2007 Triusco IGT Puglia – 10.00€ A pure Primitivo. This is the grape of southern Puglia and it was dramatic how much riper, more raisiny the wine was; a complete contrast to the cooler flavours of the north, with a firm tannic streak.

And then we embarked on a vertical tasting of Il Falcone Castel del Monte Riserva, with one vintage of its predecessor Stravecchio. Sebastiano observed that the first vintage of Il Falcone was 1971, the same as Tignanello, the inspirational wine from Antinori in Tuscany. The wine is not a single vineyard, but a wine that represents the best of the vintage. Originally the Stravecchio was aged in concrete vats, then botte were used in the late 1960s, and then in 1995 the first barriqueswere introduced. The blend is traditional to the area, 70% Nero di Troia and 30% Montepulciano which is how the vineyards were originally planted. They want the wine to be accessible, but that trend went too far in the wrong direction from 1985 to 1993,and indeed 1988 was the weakest of the line-up. In 1994 they introduced the technique of délestage, which has had a beneficial effect on quality. As befits a blend, Il Falcone does not taste of a particular grape variety.

1971 Il Falcone, Castel del Monte Riserva Quite light colour, with a tawny edge. Quite an elegant nose, with firm fruit on the nose and palate, Some lovely mature cedary notes. Depth, length and elegant. I liked this a lot.

1988 – The lightest of the first four wines, a mature meaty Bovril nose, with more Bovril notes on the palate and a dry finish.

1995 – Deep colour, beginning to show a hint of age. Some rounded berry fruit. Smokey mature notes on the palate. Good fruit, a streak of tannin, elegant, satisfying and long.

2001- Deep young colour. A tight nose; some peppery, berry fruit. Quite fresh and elegant, pepper and red fruit, with a tannic streak. Balanced and harmonious.

2005 – The current vintage on sale and a bargain at 13- 14€
Deep young colour; hints of red fruit on the nose. Young fresh red fruit on palate. Some tannin; depth and elegance. Youthful and needing time.

2006 – will be released for sale in April 2011
Deep young colour; quite oaky still with spice and cassis. Also a minty hint, unlike the others. Good tannins; youthful fruit and masses of potential.

We were tasting history and my tasting notes simply do not do these wines justice. 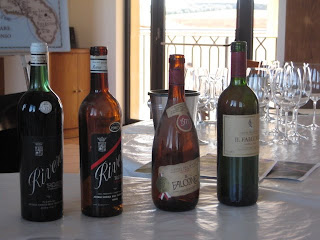 And we finished with 2006 Puer Apuliae, a pure Nero di Troia, Castel del Monte – 30€ this has spent 14 months in new French oak, and it is deep in colour, with a firm nose, with structure and concentration and tannin on the palate, but with an underlying freshness. The first vintage was 2000.

And then it was time to dash to the airport. We finished with a last taste of Puglia, for it is in Puglia rather than Calabria that burrato was invented, and believe it or not, the café at the airport offers a deliciously creamy fresh burrato with a cheerful salad, which we washed down with a glass of rosato, before catching our flight to Rome.

And you may wonder why a blog on the Languedoc is covering the wines of southern Italy. Apart from the fact that the wines are delicious and well worth seeking out, I do think there are parallels. Both regions have had a chequered history and have only recently established a reputation for wine in bottle. In the past the wines have been used to blend and boost weaker wines from further north. As in the Languedoc, southern Italy has a growing number of independent and energetic producers, and it offers some intriguing and original grape varieties and flavours. In both regions you feel that there is an enormous amount of untapped potential.
Email Post