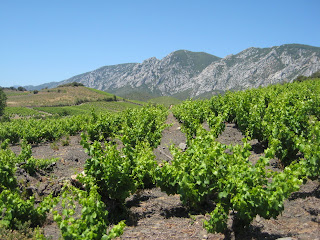 Balades gourmandes are becoming increasingly popular in the Languedoc, as a way of showing off not only the wines of a village or appellation, but also possible gastronomic combinations. The food is considered to be as important as the wine - and they make a great day out. One of the newest walks is at Maury, in the Agly valley, in the heart of Roussillon. Last Sunday was just the second time that it has been organised, and it was magnificent, well worth the early start and the drive from the Hérault. The scenery is awe-inspiring. The ruined Cathar castle of Quéribus dominates the village and the hillsides are a patchwork of small vineyards, on grey schist. 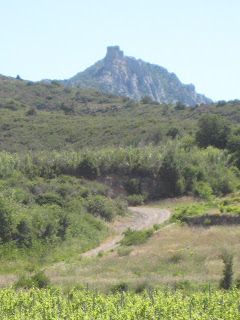 Vines are the only cultivated plants that will grow in these arid conditions, but there is also the scrubby vegetation of the garrigue, cistus, thyme, rosemary, as well as pine trees and holm oaks. 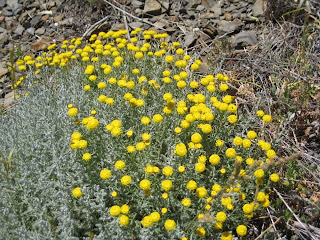 The scent of the vegetation was heady in the unseasonal warm sunshine. Butterflies flitted in the sunlight and the birdsong was enchanting.


Twenty three wine growers, all with vineyards in Maury, as well as the cooperative of Maury itself and the combined cooperative of the nearby villages of Tautavel and Vingrau, were participating in the balade. Maury may have an appellation for its fortified vin doux naturel, but it also has a fine reputation for what the wine growers call their vins secs, either vins de pays or Côtes du Roussillon Villages. Grenache, be it blanc, gris or noir, is the dominant grape variety, with some Carignan, both noir and blanc, and some occasional Mourvèdre and Syrah, while for white wine there is also Macabeo. Some of the growers’ names were known to me; others were quite new, so this was a great opportunity for some discoveries. 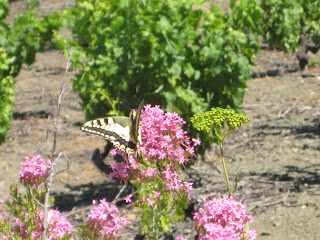 Equipped with glass, cutlery, sun hat and wine list, we were bussed to the start of the balade and then walked a very short distance to the first étape, for a tartare d’asperges garnished with chives. All the wine here were white; and often with quite obvious oak, as most growers favour a fermentation in oak, but not new, for their white wines. All the wines were either 2010 or 2009, so they had plenty of ageing potential. So what follows are some of the highlights amongst the 37 wines available for tasting.

2010 Messieurs from Les Vignes d’Elodie, a vin de pays, from Grenache Gris. 8.50€ There was a touch of oak, but not too much, with good acidity, and satisfying mouth feel, with flavours of white blossom.

2010 Coume Marie, Côtes du Roussillon from La Préceptorie de Centernach, 11.00€ A blend of Grenache Gris, and Blanc, as well as Macabeo and Carignan Blanc. Quite rounded and buttery, with oaky undertones, but with good acidity, weight and underlying fruit. Potential for development.

2009 Le Sud, a vin de pays from Mas de Lavail, 11.50€ and a blend of Grenache Gris and Blanc, was broader and richer, quite full and buttery with a rounded finish 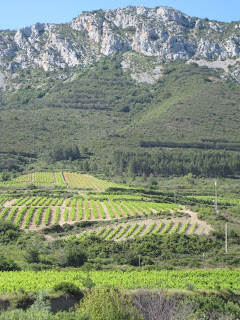 We enjoyed some fabulous views as we walked on to our entrée, which was a rather curious piece of pig, described as croustillant de cochon, au poivre de Penja fumé. I couldn’t taste anything smoky or peppery about it – our friend’s dog Milly enjoyed it enormously, while we were less enthusiastic. However, the wines more than compensated.

2010 Mas Camps Éclat de Rose Côtes du Roussillon Villages, 6.00€ A blend of Syrah, Grenache Noir and Mourvèdre, was ripe and rounded with strawberry fruit. This is not a region for delicate rosé, but for full-flavoured mouth filling wines.

2008 Clos des Vins d’Amour 1+1=3, Côtes du Roussillon, 8.75€ A blend of Syrah, Grenache Noir and Carignan had some fresh spicy fruit and was served at a refreshingly chilled temperature. That is one of the problems of tasting wine in the middle of the countryside – serving conditions may be far from ideal, and not every vigneron has thought to bring sufficient ice to chill all their wines, when even the reds benefit from chilling on a warm summer’s day.

At the fish course, a morsel monkfish cooked in a reduction of red Maury, I enjoyed the white vin de pays from Domaine Semper, 2009 Regain, 10.00€ A blend of Carignan Blanc, Grenache Gris and Blanc and Macabeo, from vines that are at least seventy years old, all planted together in the same vineyard. There was a distinctive touch of fennel, with good balancing acidity and a rounded body. It was very satisfying. 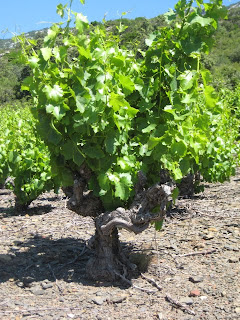 2010 Le Cirque, Vin de Pays from les Vignerons Tautavel-Vingrau from old Grenache Gris was refreshingly unoaked, and also with a hint of fennel on the palate. 4.90€

And most intriguing pairing with the fish was a Maury Tradition Grenat 2009 from Domaine de la Coume du Roy, a fresh young vin doux. The wine was chilled, with spicy liquorice notes and ripe fruit, and a touch of sweetness on the finish. It worked well, with the sweetness enhancing the fish, whereas anything tannic would have simply jarred. 11.00€

At the next étape a rather uninspiring piece of lamb, with herbes du maquis conspicuous by their absence, provided the partner for a delicious selection of red wines. Meanwhile our canine companion dined well.

2007 Désiderade, Cotes du Roussillon Villages from Mas de Lavail, a blend of Syrah, Grenache and Carignan from 100 year old vines was ripe and spicy, with rounded fruit and a dry leathery tannic note on the finish. Somehow it tasted of the wild rugged countryside, soaked in warm sunshine. 10.50€

2007 Les Dentelles, Côtes du Roussillon Villages, from Domaine Thuvenin-Calvet, one of the new producers of the village, with an impressive looking new cellar on the outskirts. The Calvet family come from Maury and began their association with the Thuvenin family from Bordeaux in 2001. The wine was dense and solid, with ripe fruit and oak – and a heady 15˚. 19.00€

2006 Un Baiser from Clos des Vins d’Amour, Côtes du Roussillon Villages, a pure Grenache Noir, from 100 year old vines, of which half had spent 12 months in old 400 litre barrels, was dense and ripe, but with a balancing fresh streak of tannin. 2004 was the first vintage of this estate and the wine promises well. 14.50€ 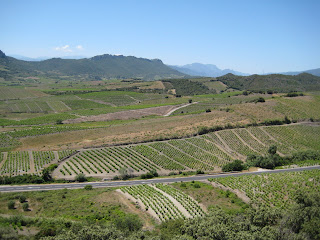 The cheese course came from Fromages Juliette in the town of Rivesaltes. Our friends knew this as a superlative cheese shop in the old part of Rivesaltes. We were offered old Salers and some Roquefort, and a selection not only of vins secs, but also some Maury. Of the vins secs, I liked 2007 Grains de Velour Cotes du Roussillon Vilalges from Domaine Majoral best, A blend of Grenache Noir, with Carignan and Syrah. It was rounded and spicy, with a satisfying tannic edge. However, tasting at this etape was slightly problematic as we were encroaching on the space of the village barbecue area, and local families were doing just that, so it required great concentration not to find smoky aromas in all the wines.

2007 Le Tiradou, a Côtes du Roussillon Villages from Domaine Francois Lurton had some warm fruit, with a warm stony minerality and quite a tannic backbone. 12.50€

Monhectare was offering both red and white Maury – Odile Pontillo has just one hectare of vines – she explained that not only is she the smallest producer of Maury, but also the only one to make more white than red Maury. She makes 1000 bottles of each and sells them together, as le Duo de Monhectare. Her white Maury is sweet and biscuity with a note of fennel, which the red has some ripe spicy fruit. It’s all very simple – she keeps her wine in vat – and she wryly observed that she does not know how to make vin sec. 10.00€ 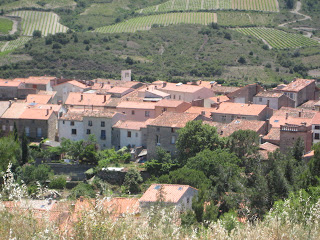 The path to the last étape took us past more vineyards and though the back streets of the Maury, where we discovered some wonderful murals and trompe l’oeil on otherwise dull walls. They certainly enhanced the atmosphere of this little village. And dessert, the best course of all by far, was a sumptuous chocolate macaroon, and just the thing to show off a range of young Maury. Amongst the stars were: 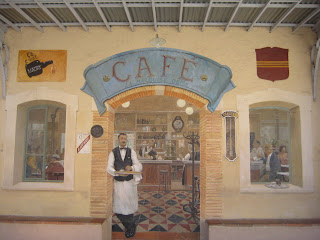 2009 Maury Grenat Cuvée Diabolique from Domaine des Terres Cathares was quite oaky on the nose with some black cherry fruit and a firm tannic finish. I prefer my Maury a little softer, but if you think young vintage port……13.00€ 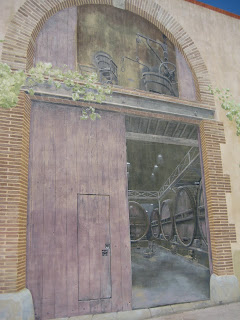 Luc Charlier who made Cuvée Jolo at Domaine de la Coume Majou explained how he had learnt his wine making in the Douro, with Portuguese rather than British houses. He picks ripe and late, adds minimal alcohol and uses no wood; nor does he filter or fine. I thought his wine had a distinctive touch of orange; it was sweet and ripe, with some orange spice, and a touch of tannin, and a fresh finish. 22.80€

And Les Vignerons de Maury excelled themselves with their 1990 Tuilé, with a long nutty palate, with a touch of figs, and a smooth finish. A grand finale to a magnificent walk. 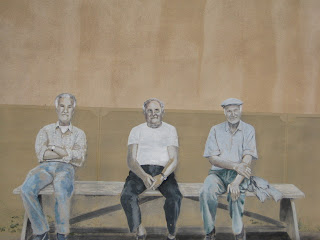