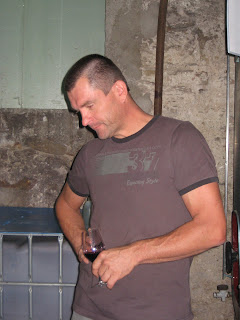 I had met Pierre Jacquet at an event for Faugères’ 30th birthday party, and wanted to follow up the suggestion of a cellar visit before the summer had gone.  So one afternoon we tracked him down in an old cellar in the heart of the village of Faugères.   His cellar is very discreet.  I was glad that he was waiting outside for us; otherwise I might have walked straight past it.   The Binet part of the domaine is Oliver Binet, who lives in Switzerland.  It is Pierre who does the work sur place.  And wine for him is a second career, after working in la commerce internationale.

In good Burgundian tradition, we tasted from vat rather than bottle, but wines that would very shortly be put in bottle, beginning with

2011 Faugères Tradition  - 11.50€
A blend of 30% Carignan, 30% Syrah, 20% Grenache and 10% each of Mourvèdre and Cinsaut.   The wine had been blended in June, and it was now July, and it would be bottled in August, on a fruit day.  They follow the biodynamic calendar.  The élevage is in vat. There was some berry fruit on both nose and palate, with some ripe flavours. I enjoyed the slightly rustic notes that come from the Carignan.

Pierre explained that they have nine hectares.  The estate was created in 1999, from bare land.  They planted the first vines in 2001 and made their first wine in 2005, and found this small cellar in 2006.  Their first vintage was made chez Didier Barral.  In 2006 they bought two hectares of old Carignan; this is the only vineyard that they bought, rather than planted, or replanted.

The vines are in the villages of Lentheric and Cabrerolles.  Pierre particularly appreciates the schist of Faugères.   They have about 12 plots altogether.  Each cépage has its own particular univers  à lui, considering aspect and slope and micro-climate.  Carignan in particular needs sunshine.

Pierre explained that they look for finesse and elegance; he wants natural acidity which will emphasise the minerality of the wines.  It all depends on the travail du sol; he uses no chemical products and minimal sulphur, just as a disinfectant.   Yeast naturally produce a little sulphur and that is a good thing – otherwise the end result would be vinegar.  And he also uses a little sulphur at bottling.    He is registered with Demeter, which is very strict – the Demeter dose of copper for oidium is half that of the usual dose for organic viticulture.

They vinify in a tronconique vat, but do not use it for élevage.  That is easier in barriques.  And they also ferment in some open barrels, and also cement and fibre glass vats.  And favour pigeage in the open top vats.

2010 Faugères Réserve – 17.00€
2 years élevage, all in wood, and then into vat for bottling.  40% Grenache, 30% Syrah, 20% Carignan and 10% Mourvèdre.  Deep colour.  Quite dense fruit on the nose and a touch of oak.  On the palate good length and some silky tannins and lots of black fruit.   Belle concentration and length.  Very promising. With their later vintages they are moving towards using less wood, and look for the minerality and finesse, with some ageing in vat.   They buy second hand barrels from Château Rauzan Gassies in Bordeaux and use a basket press, which gives a very gentle pressing.  Their average yield is about 25 hl/ha – in an ideal world they would prefer 30 hl/ha

2007 Faugères Grande Réserve – 30€
In 2007 they made a Grande Réserve, from Mourvèdre vinified in barrique.  It was so good that they kept it separately and used new oak for it.  And since then they have made a 2009 and 2010 Grande Réserve, in years when the Mourvèdre has shown particularly well.  The decision to make it is taken at the final assemblage.   40% Mourvèdre, 40% Grenache, 10% Syrah and 10% Carignan.  Deep colour.  Quite perfumed spicy fruit on the nose.  Quite dense and solid fruit on the palate.  Very good concentration.  Good tannins.  Ripe fruit from the Mourvèdre.  Very good structure.   All very promising, with lots of potential.   As is the future of the estate. 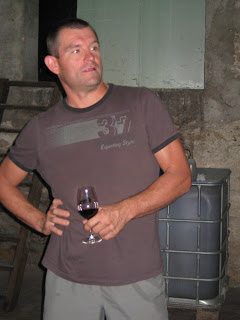