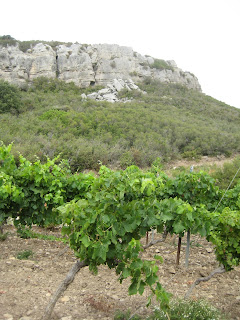 Last week seemed to bring lots of French wine growers to London.  First there was the Vignerons Independents tasting and then a whole host of them gathered at Lord’s Cricket Ground for a tasting called French Wine Discoveries.   As it happened, there was not that much to discover from the Languedoc – one possible exception being a small St. Chinian producer, Domaine de Pech Lune -  but my friends Susan and Peter Close from Château Camplazens in la Clape were there.    I’ve visited them a couple of times, but for some reason I’ve never blogged about them, and now is the moment to make amends for that omission.

They are an interesting couple and part of that new breed of wine growers who have had successful careers in other fields, which always provides a broader view of things, with an underlying energy.  Peter had his own chemical engineering company, and they were based in New Orleans, until he retired from it in 1999.  He and Susan came back to Europe and spent eighteen months looking for a wine estate, and serendipity led them to la Clape.   They made their first wines in 2001.   I first became aware of them when their Syrah started to feature regularly in the Top 100 Vins de Pays tasting, a competition which sadly is now defunct.

Camplazens now comprises 50 hectares of vines in 112 hectares of land.   It is a wild spot, with some terrific views towards the coast and the Montagne Noir.  Over the last ten years they have done a lot of work on the vineyards, planting more Grenache and Syrah, and also Marselan, a Cabernet Sauvignon Grenache cross, as part of an INRA experiment, to see if it would be suitable for the appellation.  The short answer is that it is not.  In retrospect they would not have planted so much, but nevertheless they use it for a cheerful vin de pays, and they have pulled up the Mourvèdre.  Syrah is now their principal variety.

La Clape is an extraordinary area, one of the driest and sunniest part of the Languedoc, with 3000 sunshine hours per year, and an annual average of 600 ml of rain.  Their land was once a seabed 300 million years ago and they find fossils in the vineyards.   And there is a menhir near the house – human remains from 5000 years ago have been found on la Clape

They also have done a lot of work on the cellar, rebuilding the old cement vats and the current building project is almost finished.

I asked Peter how he described the tipicity of the area.   The wind is a key factor, with the maritime influence.  La Clape can be in the clouds thanks to the vent marin.   And the herbs of the garrigues must influence the flavour, and there is good minerality in the wines, stemming from the clay and limestone soil.

Our tasting last week began  with

2010 Viognier Pays d’Oc.  It was quite delicate and peachy on the nose, with a ripe palate and more pronounced peachiness on the palate.  Nicely textured and layered, with a hint of oak.

2011 Syrah – Pays d’Oc
Ripe spice on the nose, with more rich tapenade fruit on the palate.  Supple and spicy.  It is a warm climate Syrah, and nicely mouth filling.  No oak.

They also make a pure Grenache – the last vintage I tasted had some ripe cherry fruit, with supple tannins. it was very Grenache.   And the 2009 Marselan had some dark fruit, and some smoky notes, with a warm finish.  A good barbecue wine, but you could quite see why it  is not deemed appropriate for la Clape.

And next came four different red la Clape.  They don’t make a white la Clape as you need Bourboulenc for that, and they do not particularly like Bourboulenc, but they do have some experimental rows of Muscat and Vermentino, to see if they are suitable for their terroir.

2010 la Clape, la Garrigue
This is their entry level, a blend of 70% Syrah and 30% Grenache, of which 20% is oaked.  There is indeed a touch of oak on the nose, with some ripe spicy fruit.  The palate is quite broad and mouth filling, with a tannic streak on the finish.

2010 la Clape Reserve
60% Syrah, 30% Grenache, 10% Carignan, and some oak ageing.   Some spicy fruit, with more concentration and depth, with some oak and tannin.  An appealing leathery streak and a good balance of tannin and fruit.

2009 la Clape Premium
Syrah and Grenache with some oak.  Quite ripe and intense on both nose and palate.  The nose is quite oaky, but the palate is more supple, and supple, rich and balanced.

And finally Julius 2010, their top la Clape.
70% Syrah and 30% Grenache, made from the best eight barrels.  I first tried the 2009, which I found slightly overpowering, oaky and dense, while this 2010 was toned down a little, with more elegance and structure, and some dry leathery fruit.  Julius was named for the Roman associations with la Clape.  Julius Caesar was there in 44BC and gave land on la Clape to the 10th legion. There is a claim that Caesar favoured the red wines of la la Clape, which cannot be verified, but as Peter observed: why let authenticity spoil a good story?  And the name Camplazens means camp of pleasure in Latin  it is the only la Clape estate with a Roman name. 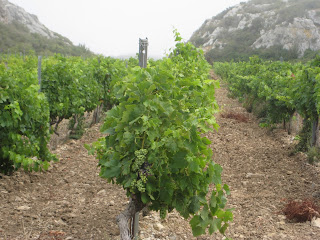