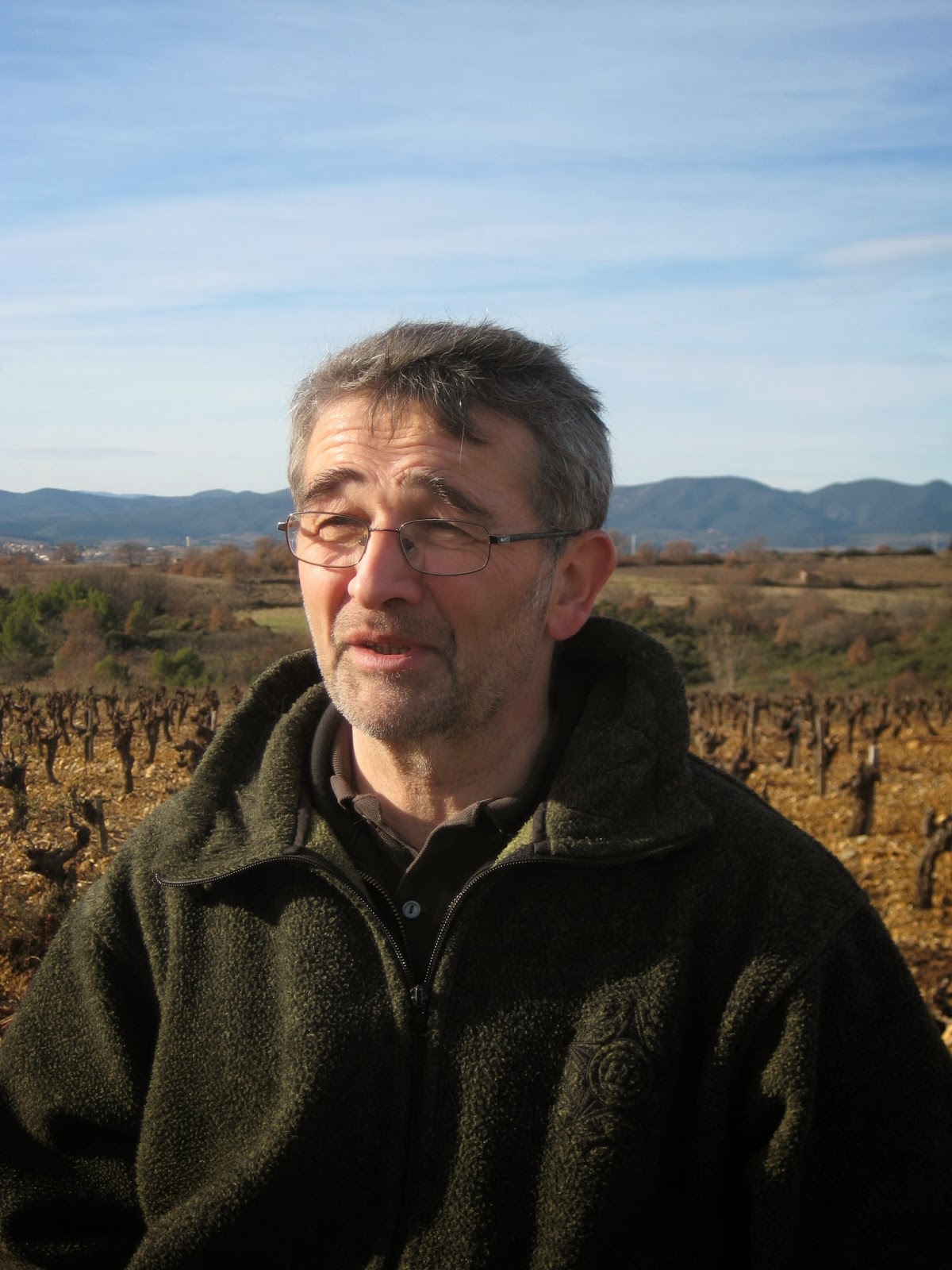 Last Monday was one of those magical winter days in the Languedoc, which make you think that spring is on the way.  We went to see Bruno Lafon at Domaine de Magellan in the village of Magalas, and he immediately took us to see his vineyards.   He has two large plots on the hillside off the road to Fouzilhon, as well as some smaller plots scattered around the village, making a total of 32 hectares altogether.
Bruno talked about his search for vineyards,and how he arrived in the Languedoc.  He comes from Meursault and initially worked on the family estate.   A complete change of direction saw him working with in sister-in-law, Sylvie Legros,  in her family business, and now they have both come back to wine.  They looked all over the south of France.   Provence was too expensive; Bruno couldn’t find anything he liked in the Rhône valley, and then he saw these vineyards and had a coup de coeur.  In the winter light I could quite see why.   The vines are at an altitude of about 180 metres.  You can see Cap d’Agde and just make out the sparkling Mediterranean, and even the Pyrenees, and in the other direction there is a backdrop of the Montagne Noire and the Caroux. 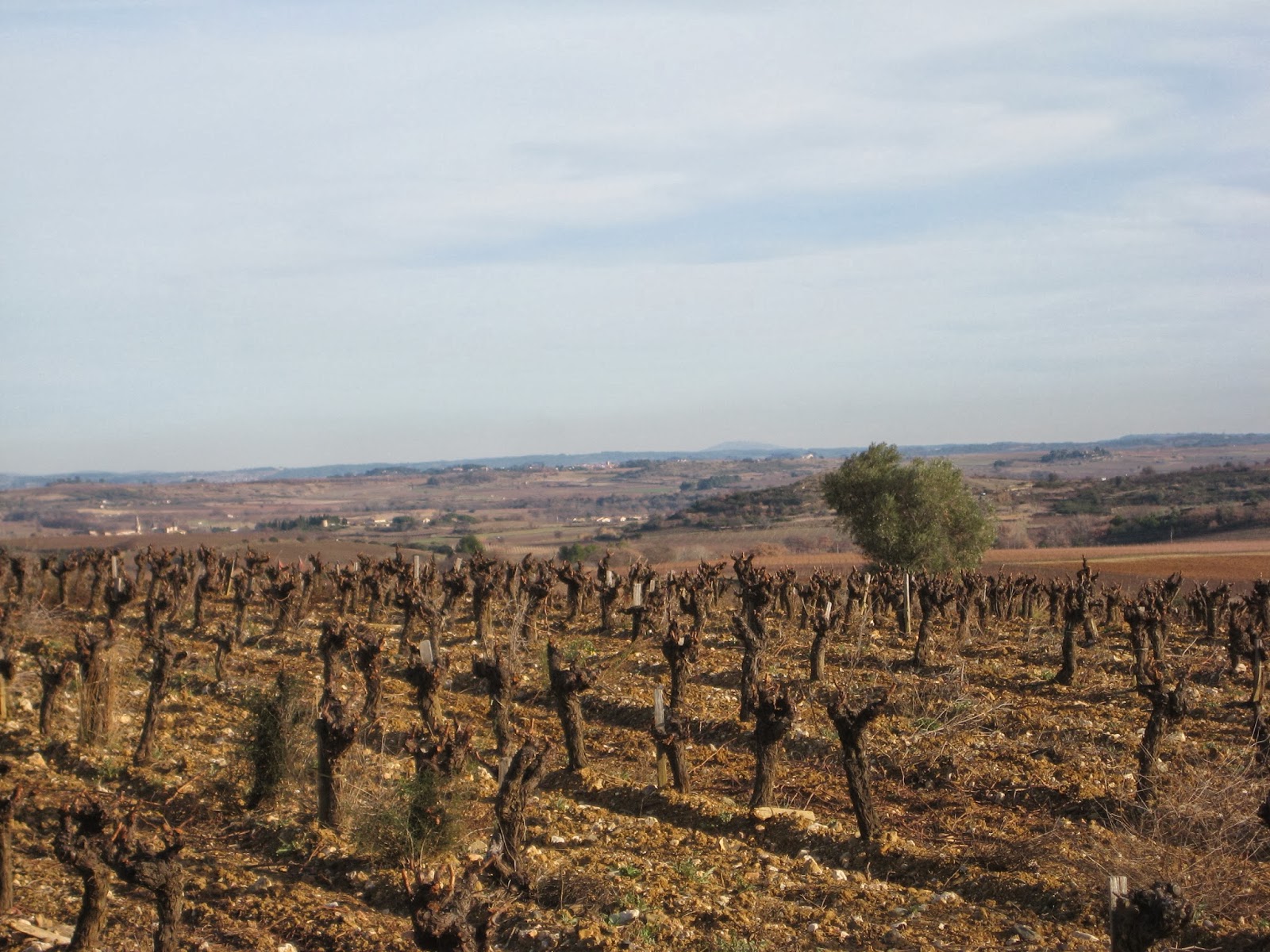 The terroir is mixed; one plot is grès or sandstone, with good drainage and the vine roots can go deep so that there is never a problem of water stress.   It gives wines similar to those from schist.  The acidity is not high, but the wines are fresh, with good minerality.  Another plot is villefranchien, clay with small stones, including quartz.   It is a terroir de rivière, more recent than the sandstone and can be quite compact, which can make it difficult to work.  Like sandstone, it has no calcaire, chalk or limestone.  Bruno’s oldest vines are 60 years old, and their average age is over 30 years.    He has worked organically since the beginning.  For white wine he has Roussanne, Grenache Blanc and Muscat and for red wine Syrah, Grenache, Carignan and Cinsaut, as well as Tempranillo, Merlot and Cabernet Sauvignon.    Initially most of his wines were Côtes de Thongue, but some of the appellation boundaries have changed, so he now has land within Pézenas - the commune of Fouzilhon is part of Pézenas, but Magalas isn’t – and he also makes Pays de l’Hérault and Languedoc, and just one Côtes de Thongue for the Canadian market.   He no longer feels that he has the same objectives as the Côtes de Thongue , considering that the Côtes de Thongue concentrates more on Cabernet and Merlot, which he likes less. 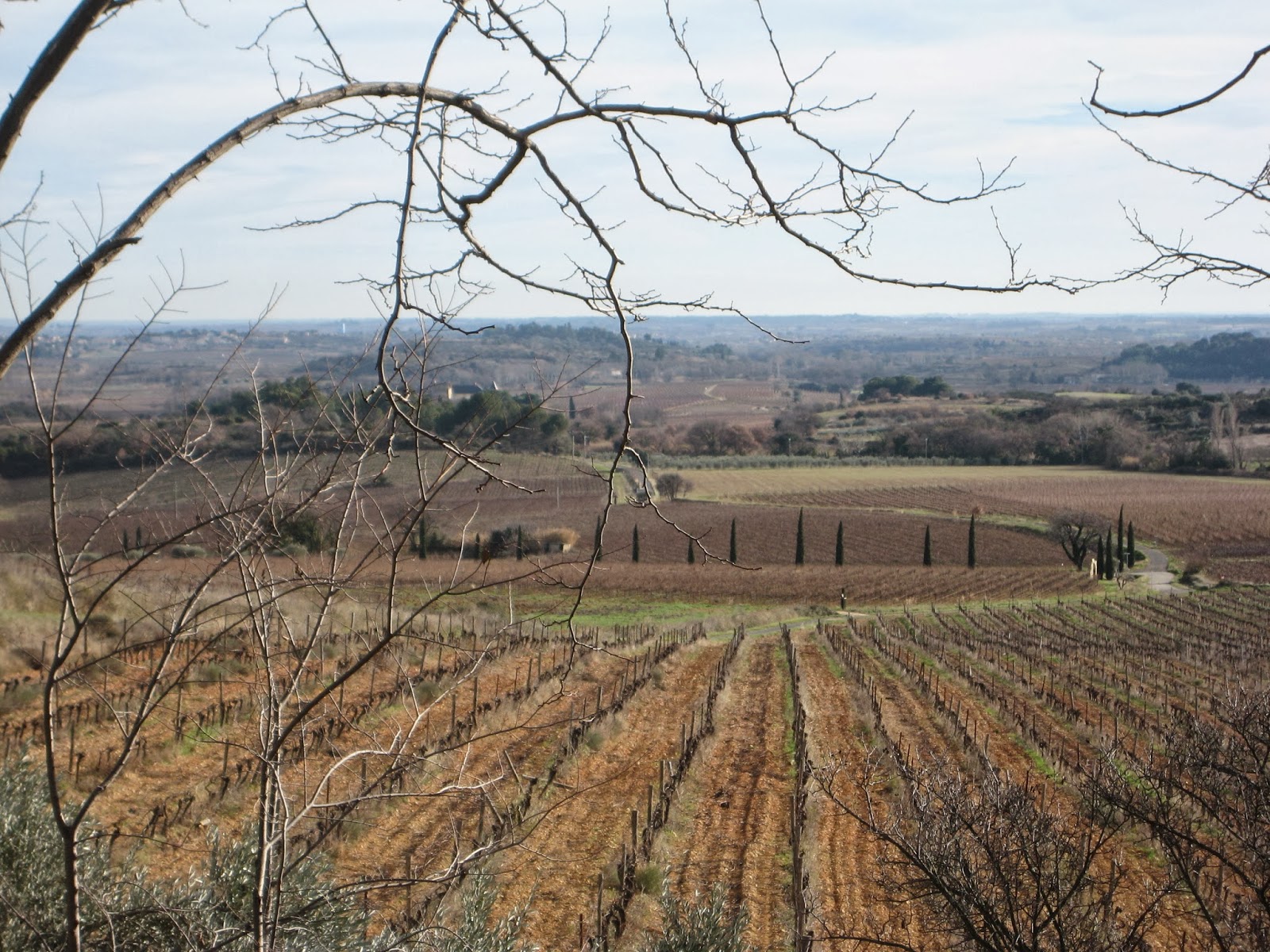 Bruno's cellar is a classic Midi cellar, a large barn with a high ceiling with cement tanks, and some barrels and a few stainless steel vats.    And his vinifications are classic.  Two things he insists on are handpicking – everything is handpicked and he also tends to pick earlier than some of his colleagues.  He uses a tapis to fill the vats, so that there is no pumping of the grapes, and he destalks most of his grapes.   He likes to chill the must down to 12˚C  for a cool pre-fermentation maceration and he only uses natural yeast.  He favours remontages.  It is all ‘assez soft’, as he said.   And he buys second hand three year old white  Burgundy barrels.  From your brother, I suggested, as Dominique Lafon is a leading Meursault producer.  ‘Good heavens, no; he’s much too expensive’, was the reply.  Champy’s Corton Charlemagne barrels suit him nicely.  But Bruno insists that the barrels are never left standing empty, except for the journey to Magalas. 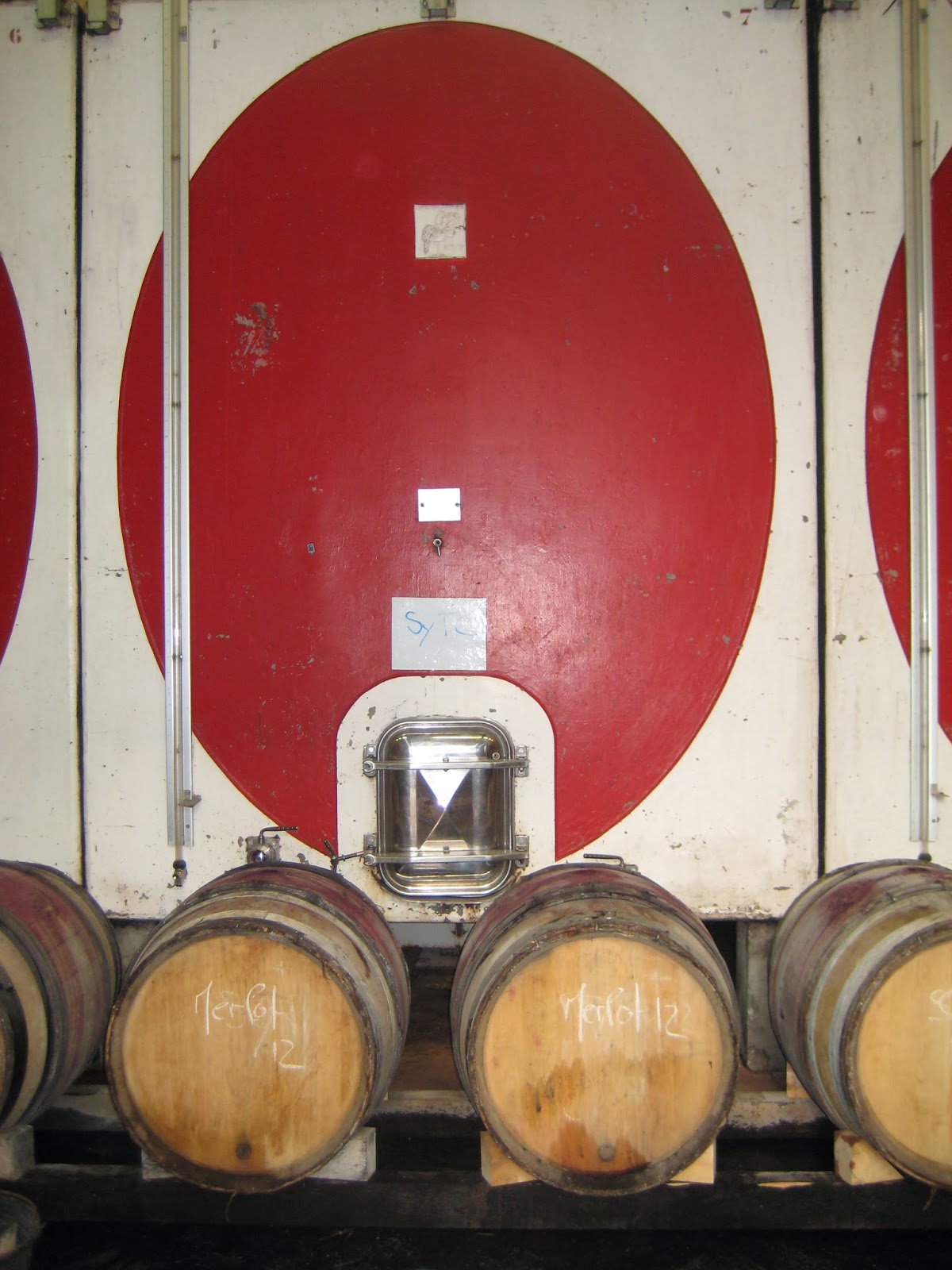 The range of Domaine de Magellan comprises an entry level Fruit Défendu, Pays de l’Hérault and then there is Domaine de Magellan, appellation Languedoc, and then the flagship wines which include Pézenas, Alta and Le Grenache.  This was going to make for an extensive tasting, especially as Bruno had also prepared some vat samples of 2013. 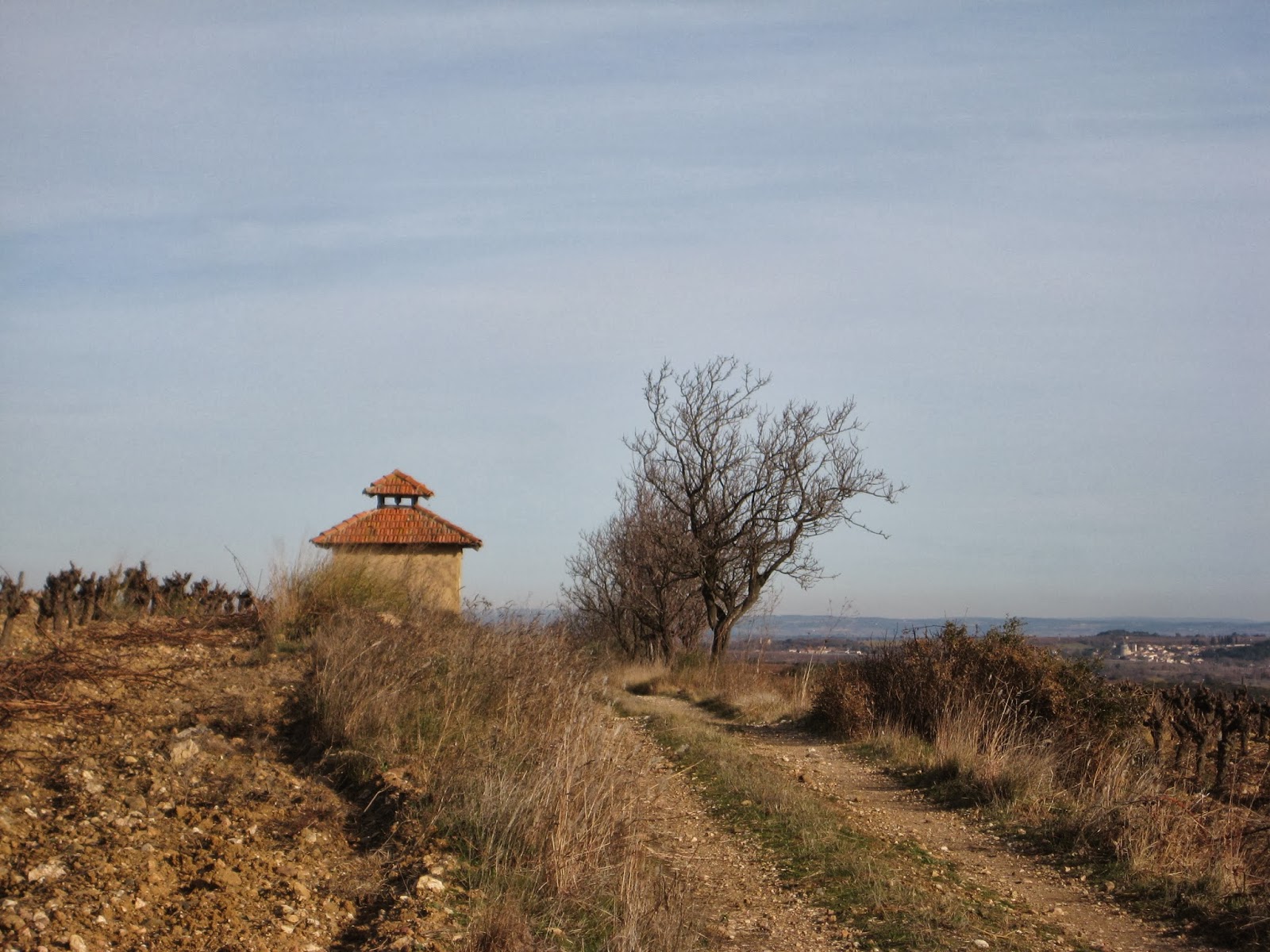 2013 Domaine de Magellan, Languedoc
A blend of Grenache Blanc and Roussanne.  Still in barrel.  Bâtonnage until the end of January, and due for bottling in April 2014.   Sulphur will only be used at bottling and the wine has done its malo.  Obviously it is still very youthful but promised well, with fresh acidity and satisfying mouth feel, but it was not heavy.  Bruno emphasised the early picking; his Grenache Blanc is usually being picked at the same time that other people are picking their Chardonnay.

2012 Domaine de Magellan, Languedoc – 10.00€
75% Grenache Blanc and 25% Roussanne.   A slightly different blend from 2013 as the Grenache suffered from coulure in 2013.   It is a richer vintage than 2013.  Elegant white blossom on the nose and on the palate fresh acidity, and some dry nutty notes, and a firm backbone.  The Grenache gives a tannic streak and some weight or gras, and the Roussanne the floral notes.   Bruno works reductively to retain the freshness, and he favours a malo which is unusual for white wines in the Languedoc, but it makes the wines more stable.  Very good ageing potential.   Without the malo, the wines are initially more aromatic, but also more fragile.

2013 Le Fruit Défendu Rosé, Pays de l’Hérault – 6.50€
An early bottling for Christmas, and pure Cinsaut, from free run juice that has spent minimal time on the skins.  So a pale colour.  Opulent raspberry and strawberry fruit on the nose and palate.  Ripe with fresh acidity.

2013 Domaine de Magellan Rosé, Languedoc  – 10.00
This was made for the first time in 2013, just 3000 bottles.  It is a blend of Syrah, Grenache, Carignan and Cinsaut, made from the first free run juice, and then all blended and fermented altogether.   The grapes are then pressed and used for Fruit Défendu red.  The wine has a little more colour than le Fruit Défendu rosé, and is rounded and more vinous on the palate, but not heavy.  The grapes are picked later than for Le Fruit Défendu. 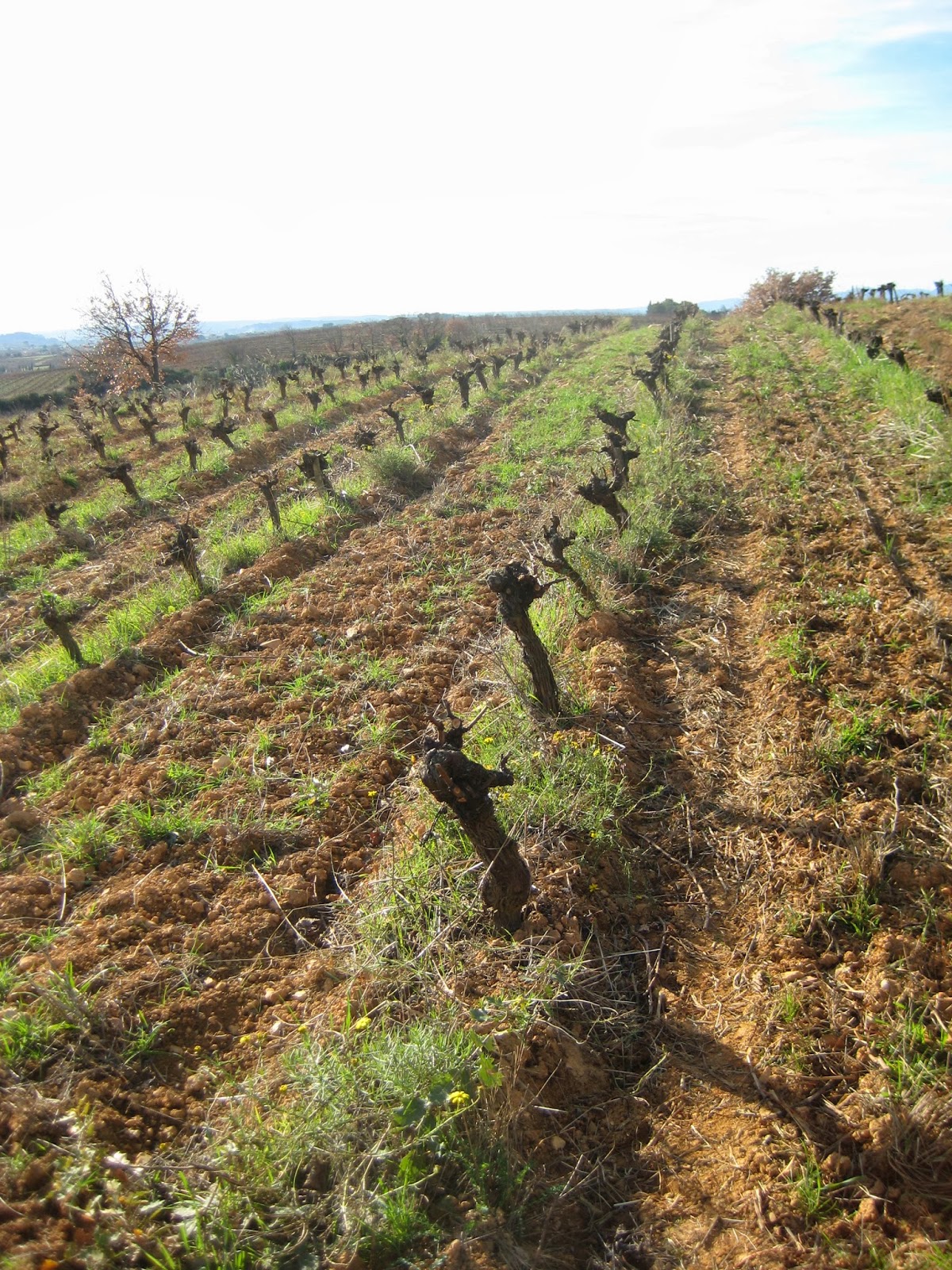 2013 Le Fruit Défendu Blanc, Pays de l’Hérault   - 6.50€
A blend of 60% Grenache Blanc and 40% Muscat à petits grains.  Co-fermented in vat.  Bruno likes fermenting different grape varieties together – he feels that they marry better, and that the practice of blending just before bottling is driven by the oenologists, who work to minimise any errors.  Fresh grapey nose and palate.  Fresh and aromatic, with a slightly bitter Muscat finish.  Intended for easy drinking, and that is just what it achieves.  But personally I much prefer the depth and subtlety of the Domaine de Magellan.

2013 Le Fruit Défendu red, Pays de l’Hérault.
A vat sample; the blend is not quite complete. Medium colour, with easy fresh fruit and some weight.  Difficult to judge. But promises nicely.

2012 Le Fruit Défendu red, Pays de l’Hérault  – 6.50€
Quite a ripe fresh nose, with supple tannins. Ripe and rounded.  Would be lovely served slightly chilled in the summer.  A bistro wine.  Only 12˚.  A blend of Cinsaut, Grenache Syrah and Carignan. 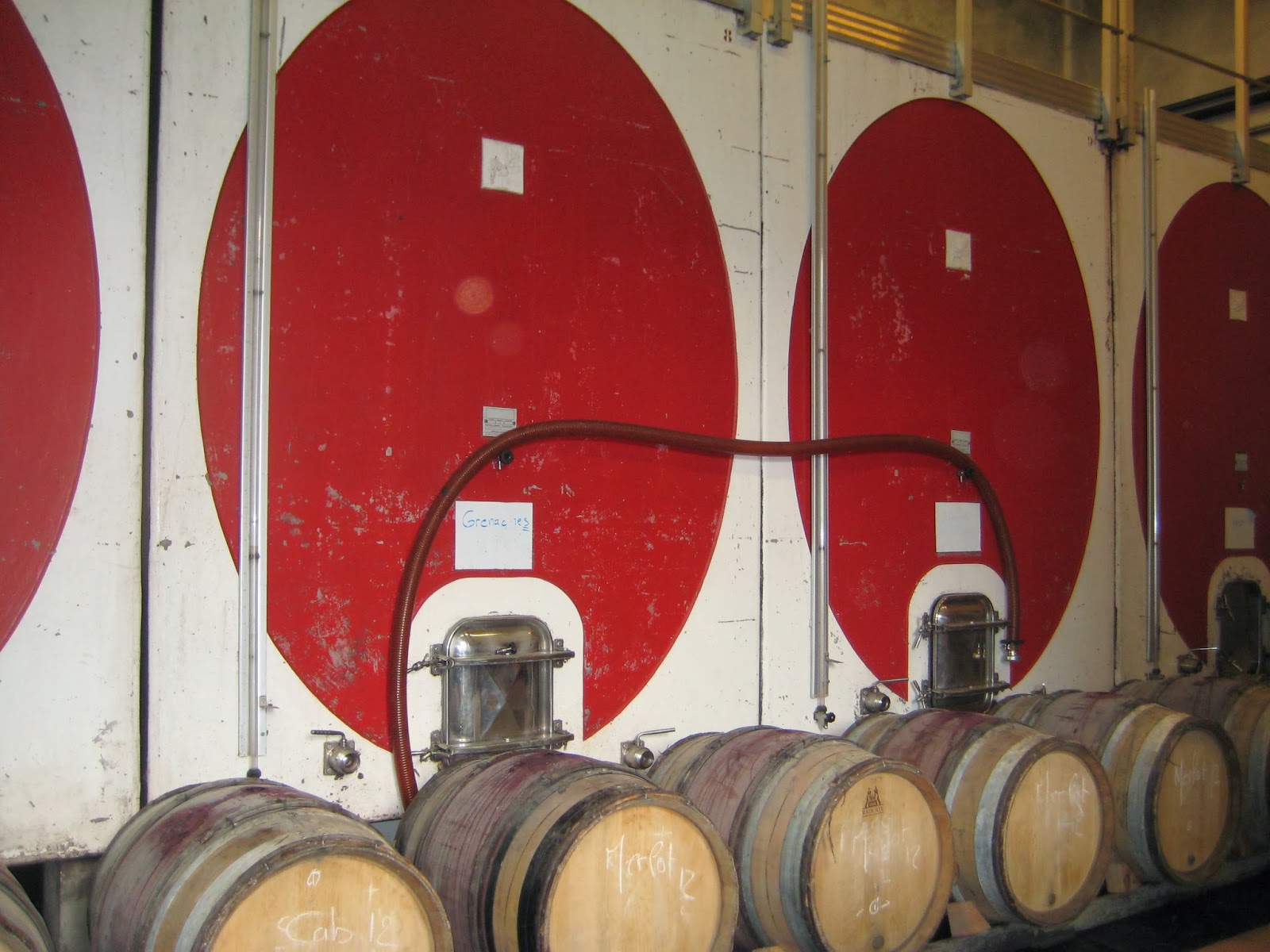 We then tried some vat samples of single varieties.  The Grenache was very Grenache, with ripe confit cherries on nose and palate.  The Syrah was fresh peppery and perfumed, with a tannic streak.  It will be going into a barrel tomorrow. Bruno is pleased with his 2013s.  They have an attractive freshness.   He talked of the difference between puissance and density, and dislikes wines that are too heavy.  For this reason he did not participate in the collective Pézenas cuvée that was the idea of Jean-Claude Mas as he felt that the wine was not characteristic of Pézenas, and was going to be too alcoholic and heavy.    Bruno’s 2013 Pézenas would be a blend of this Syrah and Grenache, with some pressed wine.  It was ripe and rounded, but also elegant and fresh, with some depth.  2013 Carignan would be part of Domaine Magellan with some Grenache.  The Carignan is destalked, but then Bruno adds the stalks back into the vat.  He does not do carbonic maceration.  The flavour was fresh and mineral, rich and structured with some fresh fruit.  The addition of the stalks can reduced the alcohol level by at least l˚.

2012 Domaine de Magellan red, Languedoc
Syrah, Grenache and Carignan, which are blended together as soon as possible.  A blend of two terroirs, grès and villefranchien and a blend of three cépages, from each terroir, so six components.  This wine has the generosity of 2012.  Some ripe fruit with spice body and backbone.  Structured youthful fruit with a tannic edge and lots of potential.   All the wine has spent some time in barrel, but necessarily the same length of time for each component.   2012 was a small vintage, as was 2010.  2013 was better for quantity, apart from the Grenache.

2010 Domaine de Magellan red – 9.00€
Approximately 50% Grenache, 30% syrah and 20% Carignan.  Assembled gradually so the precise proportions are impossible to say. Deep colour; perfumed fruit. Quite spicy; balanced.  Drinking very well.  A tannic streak, but the oak is very well integrated.  You simply do not notice it.  Fresh red fruit.  A lovely glass of wine. 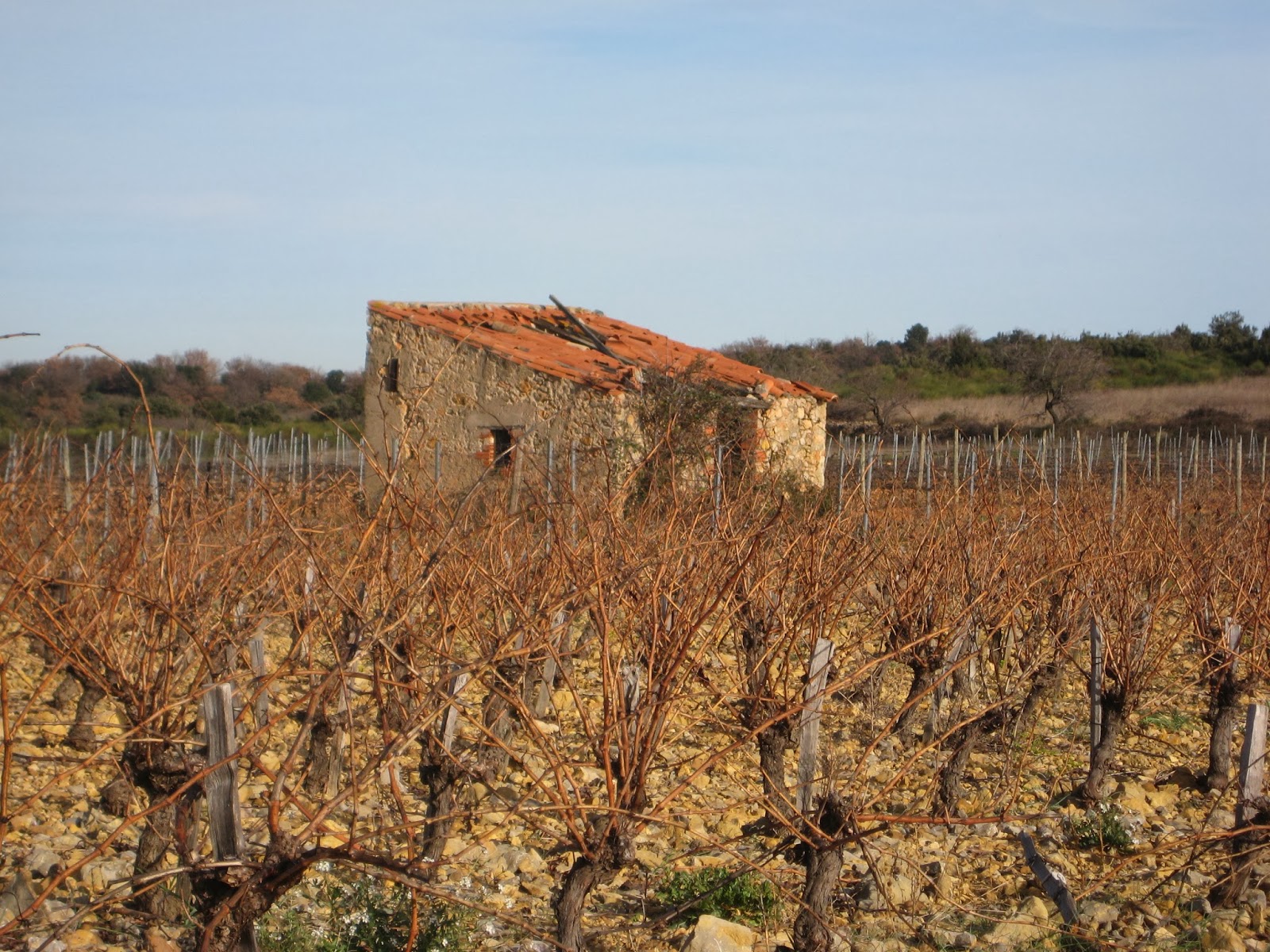 2012 Pézenas
Minus two barrels of pressed wine.  Slightly more Grenache than Syrah.  Vinified together.  Half égrappé and half not. Will be bottled in April.  Ripe rounded, with more depth and spice than the Languedoc.   Pézenas is grown only on grès, and the Syrah is facing north, so that it can be picked at the same time as the Grenache.

2011 Pézenas – 12.00€
Deep colour.  Fresh red fruit, with a leathery note.   Lots of nuances on the palate.  Plenty of ageing potential Good structure; frim fruit, dry red fruit.  A lovely glass of wine.   Bruno favours lower alcohol levels; considering the current fashion for phenolic ripeness to be a fantasme or fantasy.   'Ca n’existe pas'.  You need to retain freshness in the Midi.  Richer more powerful wines are not better wines.   He laughingly referred to two types of wine – those you drink sitting down, and those you drink standing up! 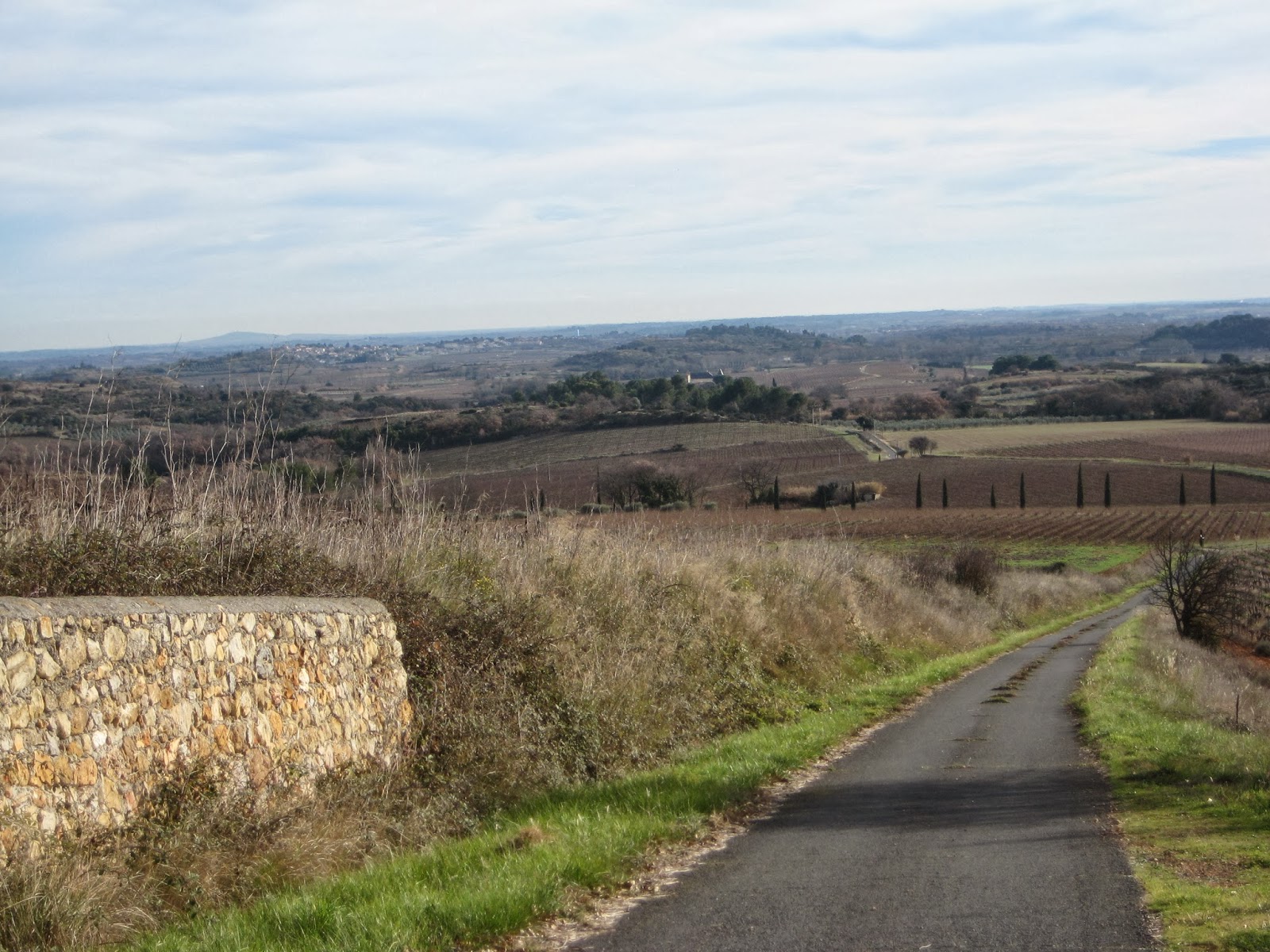 2011 Le Grenache de Magalas, Pays de l’Hérault – 7.50€
From a vineyard of old Grenache that is not classified within the appellation.  Good colour.  I detected liqueur cherries; Bruno proffered blood oranges with a citrus note.  Supple fruit with an edge of tannin and acidity and the rondeur of Grenache.  14˚.

2010 Alta, Pays de l’Hérault – 19.00€
A blend of Tempranillo and Cabernet, first made in 2001. The Tempranillo is 40 years old and grown on villefranchien.    Initially it was made with Syrah and Grenache blended with the Tempranillo but Bruno gave up making that, and then in 2010 decided to add Cabernet to the Tempranillo, and give it 14 months in wood.   Although it is more expensive than his other wines, it is not really intended as a top cuvée.
Deep colour. Rounded firm fruit.  A tannic streak.  Some dry spice.  Dry cassis from the Cabernet; quite structured with underlying spice. An intriguing glass of wine.   Bruno considers Hérault to be neutral as a vin de pays denomination, and the Languedoc AC does not have a very precise definition, and that suits him.

It had been a while since I had tasted with Bruno and I think his wines are better than ever.  The three Domaine de Magellan Languedoc and the Pézenas are elegant and stylish examples of the Languedoc. Maybe Bruno’s Burgundian origins have an impact. 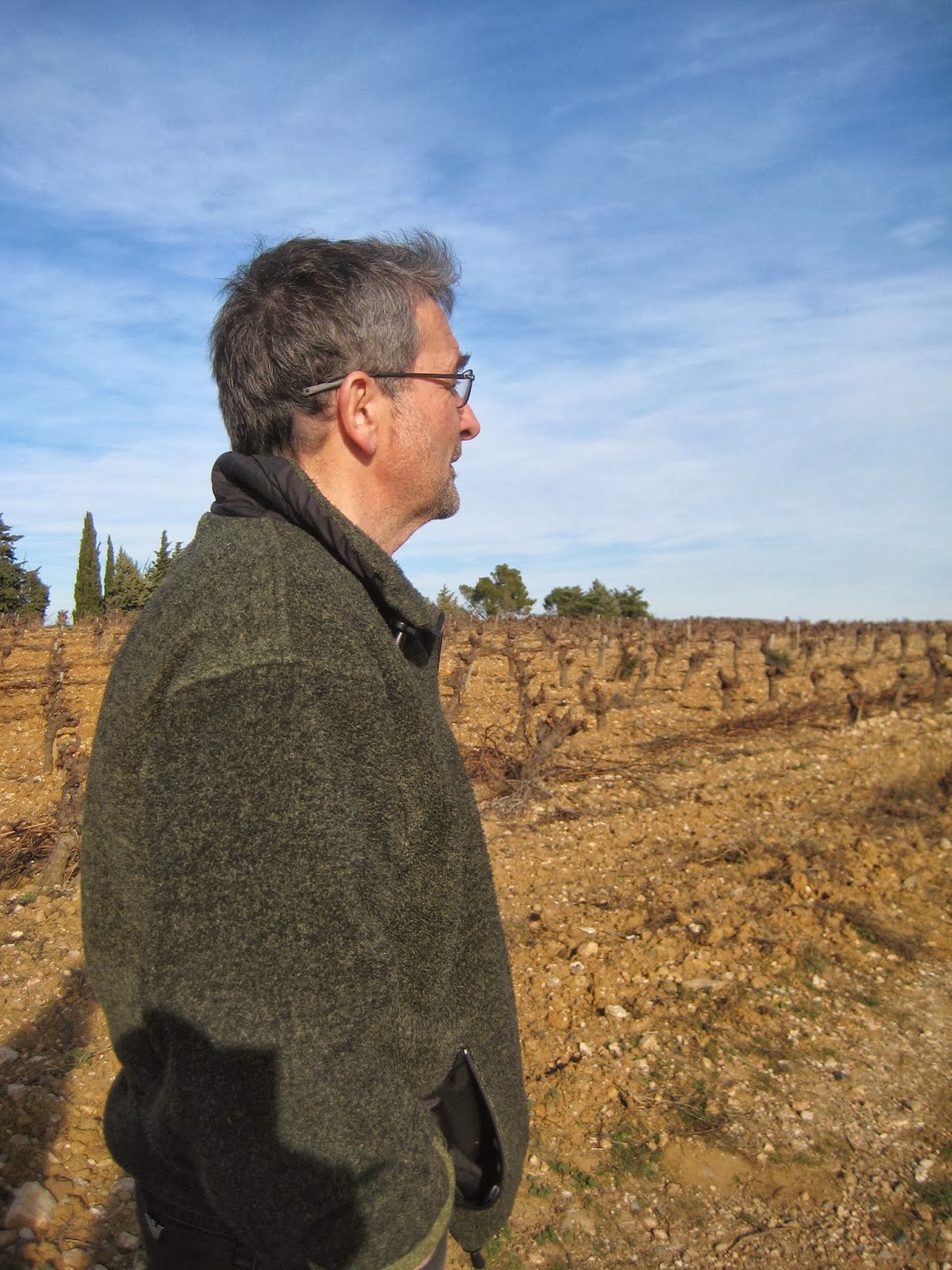