A few days in the Languedoc, with Frédéric Brouca and Jean-Michel Alquier. 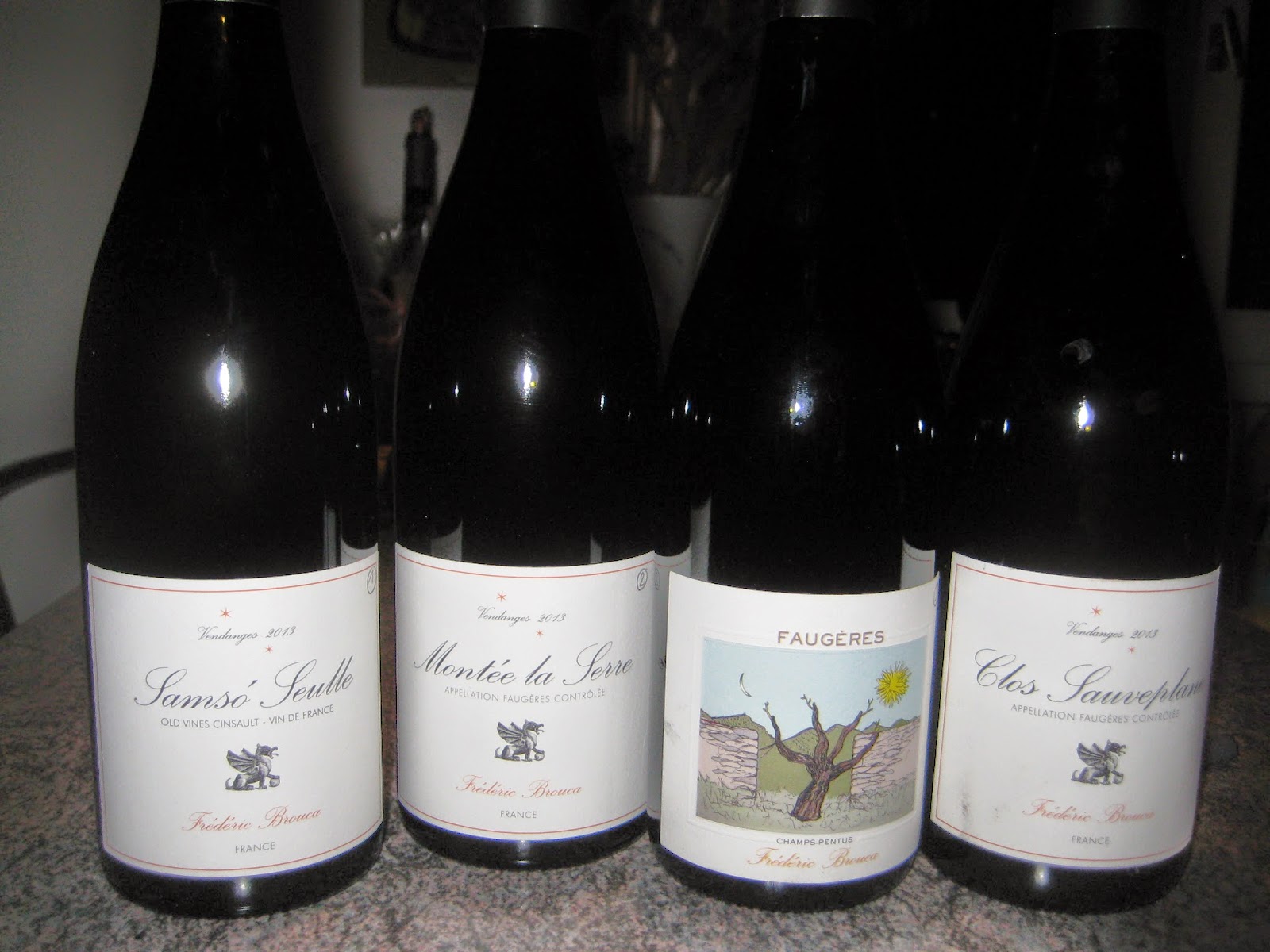 Our New Year visit to the Languedoc did not go quite as planned as I developed ‘flu the evening we arrived, and spent most of the following week in bed.  I have not had 'flu for nearly thirty years and had failed to realise the effect that a high temperature has on your taste buds, amongst other things.   I toyed with a glass of wine on New Year’s Eve, but without any enthusiasm, and it was a full week before my taste buds were behaving normally again – but then things began to look up, as I had some rather delicious bottles of  Faugères to check out.

The wines of a new estate, with a first vintage in 2013, are just coming onto the market.  Look out for Domaine Frédéric Brouca.    He has made four quite distinctive cuvées.

Samsó Seuille, Vin de France 13⁰ - 15€
A pure Cinsaut from a single vineyard La Serre, with forty year old organic bush vines.   Seventy percent whole bunch pressing and the wine has spent ten months on fine lees in a stainless steel tank.    For me it is absolutely classic Cinsaut.  I love the fresh cherry fruit on both nose and palate, with a light streak of tannin and some acidity, with a slightly leathery warm note on the finish.   It is fresh, youthful and fragrant.

Montée la Serre, Faugères 13.5⁰ - 20€
A blend of 40 per cent Syrah, 30 per cent Grenache, 25 per cent Carignan and 5 per cent Cinsaut.  Ten months élevage in two to four year old barrels. This was the wine I liked least, as there was a slightly reductive note on the nose.  However, the palate was better with a slightly warm dusty note, as well as some ripe red fruit and a streak of tannin, which was nicely integrated.

Les Champs Pentus, Faugères 13.5⁰ - 12€
40 per cent Syrah with 30 per cent each of Carignan and Grenache aged for ten months half in tank and half in foudres.   The nose was quite firm with some closed red fruit and on the palate there was depth and more tannin.  The palate was nicely fleshy, rounded and balanced, with a youthful peppery note.

Clos Sauveplane, Faugères 13.5⁰ - 25€
From two isolated vineyards, on the eastern edge of the appellation, with 50 year old Mourvèdre, planted en echalas with a high density and 30 year old Syrah, aged for thirteen months in foudre.  Deep young colour.  Firm youthful sturdy nose, with some firm red fruit, and on the palate youthful and structure with firm tannins, and fresh red fruit, and an elegant finish.  The wine will develop well with some bottle age.

I also had some bottles from Jean-Michel Alquier to taste. Two went to dinner with friends in the village who produced a delicious tourte de la maisonette – their interpretation of a classic English dish that is a perfect foil for red wine on a chilly winter’s evening.

So with the cottage pie, we enjoyed a pair of Maison Jaune, which is 70 per cent Grenache, with 20 per cent Syrah and 10 per cent Mourvèdre.  The 2011 – 18.00€ - has some cherry spice on nose and palate.  It is medium weight, with a streak of tannin and a little pepper and lots of the ripe cherries, typical of Grenache.  Balanced and harmonious with understated warmth.

2006 was similar in colour, with a more open and rounded nose, and on the palate, it was ripe and warm, but not heavy, with a grip, and some slightly leathery notes, and some satisfying evolution.   Not so dissimilar to a Châteauneuf-du-Pape.

2012 Les Premieres,  14.00€ - drunk with some other friends the next day, is a blend of 50  per cent Syrah and 30 per cent Grenache with 20 per cent Mourvèdre.   Quite a deep young colour.   Quite rounded peppery spice on the nose and on the palate, quite ripe and rounded, with a peppery note and a youthful tannic streak.    Some ageing potential but also drinking nicely already.

2010 les Grandes Bastides d’Alquier
80 per cent Syrah with 15 per  cent Grenache and 5 per cent Mourvèdre.  Some forty year old vines.   This is a much more serious proposition, and at 50€ considerably more expensive.   Deep young colour.  Quite a firm dense peppery nose, and the palate riper and richer, with a hint of vanilla and oak, but nicely integrated and understated.  Layers of flavour; youthful with a firm tannic streak but already drinking nicely, or alternatively would age for several years.

And then a deviation away from Faugères for 2012 Clos du Prieur which comes from the Orliac family who are better known for Domaine de l’Hortus in the Pic St. Loup.  Clos du Prieur is a Terrasses du Larzac, and very much off the beaten track in St. Jean de Buèges.   15.95€   Medium colour.  Quite fresh and peppery on the nose, with some rounded ripe cassis fruit balanced with a streak of acidity and attractive freshness, as well as some tannin.  Quite perfumed and youthful, and some body.  Drinking nicely already.

And a note of frivolity was provided by my friend Verena Wyss, with a bottle she brought to dinner with another friend in the village.   Vin de Fête, Blanc de Blancs, méthode traditionnelle .  In other words champagne method sparkling wine made from Viognier – 14.00€  I think this is the first time that I have had sparkling Viognier and it worked remarkably well, with a light colour and some soft creamy fruit on the nose, and on the palate soft and rounded and nicely textured.   Verena explained how she made the very first wine for her daughter’s wedding – I have heard about a long engagement in order to plan the wedding, but to give your mother enough time to make the wine..........  Lovely easy drinking and very celebratory.

And next week I am off to Mexico for two weeks holiday so there will be a bit of a hiatus..... until the beginning of February.

Bob Rossi said…
I stumbled across this this week after returning from Canada and having tried some wines by Frederic Brouca. We had a family gathering at a restaurant in Ottawa, and there was a group of Canadian wine people at one of the tables. Eventually my niece and I were invited to try a couple of wines from Brouca, poured by one of the restaurant's wine people, who has gone to Faugeres the last couple of years to work with Brouca during the harvest. I then discovered that Frederic Brouca is a Frenchman who now lives in Ottawa. When I returned home I first went to your blog (naturally!) to see if there were any references to this producer, and lo and behold, there was this post! I haven't been to the Faugeres region in about 10 years (we stayed in Roquebrun for a week), but if I make it back, I'll have to check it out.
23 November 2016 at 13:54