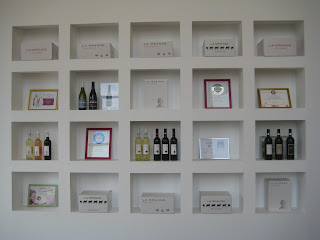 Domaine le Grange has a new cellar.  I missed the official opening and instead dropped in a little while ago  to admire a smart building in pierre de Beaulieu and a host of shiny stainless steel tanks.   There is also a welcoming tasting area by the entrance.

This was also the opportunity to meet Rolf Freund, and his wife, the owners of Domaine la Grange.  They spend quite a lot of their time in Germany where Rolf has a wine business, but are in Gabian at key moments of the year.   Once Rolf had decided that he wanted to buy a wine estate, he spent a year looking, from the Côtes du Rhône to Roussillon.  Jean Natoli, who is now his oenologist, helped and saw the potential at la Grange.  The  vineyards have some altitude and the proximity to the Cevennes provides a good diurnal contrast.  In short it was a site with masses of potential.  And the new winemaker, Thomas Raynaud was there too.   He has an impressive and varied CV; he studied in Montpellier and has worked in  the Côtes du Rhône, South Africa, Beaujolais, Australia, Corsica and most recently for Domaine Lafage in Roussillon.  So after admiring the new cellar, we settled down for some tasting, my first opportunity to look at Thomas’s wines, and also an update on the changes in the range. 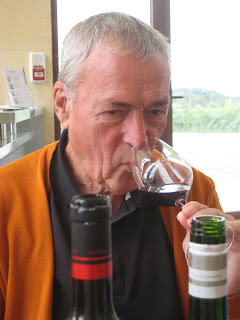 Rolf is quietly enthusiastic.   He talked about the origins of the estate and the history of the region.  There are three extinct volcanoes nearby, Cadablès, St Hilaire and St. Marthe, which created a mixture of different soils when they erupted.   The estate originally had sheep, for Roquefort, and they again have some sheep on the estate.  The Roman head on the label of their Classique range is a reference to the Roman origins of the area.  There was a spring nearby that supplied water to Béziers, with a 12 kilometre aquaduct.

We tasted the various white wines, beginning with:

2014 Terroir Chardonnay, Pays d’Oc - 6.90€
Lightly buttery, with a rounded nose, and on the palate good acidity with some weight and fruit.  Nicely balanced.   And when I made a comment about liking Chardonnay, particularly Chablis, that ages.  Rolf said this does, and produced the 2011 vintage.  It was a pretty golden colour and had developed a very intriguing nose, with notes or maturity and stony minerality.  It seemed firm a dry, but there were also some buttery notes and also a hint of honey on the finish.  I’ve said it before, and I will say it again: white wines from the Languedoc do have ageing potential,  maybe not as much as Chablis, but nevertheless….. In this instance the 2011 was a much more satisfying and characterful wine than the 2014. 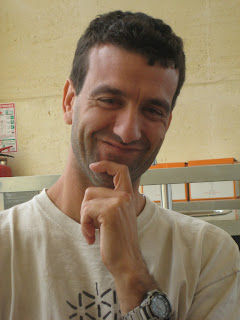 2014 Terroir Sauvignon, Pays d’Oc - 6.90€
This was their first vintage of a pure Sauvignon and they readily admitted that there was room for improvement.  It was quite fresh and pithy, but did not have much varietal character.  Definitely work in progress.

2014 Tradition Grande Cuvée Blanc, Pays d’Oc – 9.90
A blend of Chardonnay and Sauvignon.  A little depth of colour.  Quite a restrained nose, with some oak, and on the palate more oak, giving a touch of vanilla as well as some tannin.  It was bottled in February and was still quite oaky for my taste buds, but I think it has potential to develop in the bottle.  Think white Graves by way of comparison, with Chardonnay instead of Semillon.

Then on to some rosés :

2014 Classique Rosé, Pays d’Oc– 5.90€
A blend of Cinsaut and Syrah.  All pressed.  A pretty pale pink.  Quite fresh, dry fruity nose, while the palate fills out a little, with some ripe raspberry fruit, and a little weight.  Balanced with good acidity and quite a long finish.  Fresh and easy drinking.

2014 Grande Cuvée Rosé,  Pays d’Oc – 9.90
The labels for the Grande Cuvée range are fun, with sheep walking across both the front and back labels. This is a blend of Syrah and Mourvèdre, pressed.  (fermented at 12˚) A deeper colour.   Quite firm and dry on the nose, and some weight on the palate, from riper grapes than the Classique Rosé.  I wondered if there was some barrel ageing, but no.  However, it is definitely a food rosé, with some weight and body.  A reflection on the quality of Mourvèdre for rosé.   Think Bandol.

And now for the reds, with four quality levels, beginning with:

2014 Classique Rouge, Pays d’Oc – 5.90€
Backbone Syrah, with some Mourvèdre and a little Carignan and Merlot.  Screwcap.  The French apparently are becoming more accepting of screwcaps.  Medium young red.  Soft spicy red fruit, and on the palate.  A slightly sweet soft ripe finish.  The aim is drinkability, and that they have achieved.

2014 Terroir Merlot, Pays d’Oc – 6.90€
The labels for the Terroir range are illustrated with different stones, indicative of a different terroir.
Quite ripe and plummy on the nose.  Some fruit on the palate, with a streak of tannin and a slightly green finish.  Rolf observed that it ‘is different from other Merlots from around here’  and I agreed as I tend to find a lot of southern Merlot a tad too raisiny for my taste buds, but this was not.

2014 Terroir Cabernet Sauvignon, Pays d’Oc - 6.90€
Deep colour. Quite ripe cassis; quit rounded on the palate with supple tannins giving some backbone.  I preferred it to the Merlot. 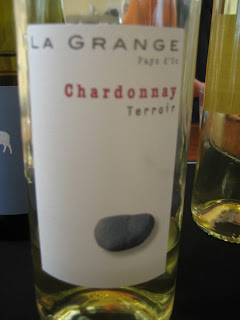 Next in quality order came Tradition, with :

2013 Prat Bibal, Languedoc – 8.90€
A blend of Syrah, Mourvèdre and Grenache noir.  No oak.  Deep colour.  Quite a supple nose.  Medium weight.  Quite firm tannins, with dry spicy; quite youthful and closed and good potential.  Prat Bibal is the name of a nearby amphitheatre of vines.   A more traditional expression of the Midi, compared to Sélection, for which they want an expression of fruit.

2014 Sélection, Pays d’Oc – 8.90€
Syrah and Merlot.  Quite a firm nose; and on the palate some weight.  Firmer and fuller and youthful, and a year younger.  I preferred Prat Bibal.

Castalides is the top of the range: a reference to water nymphs, with
.
2013 Réserve, Languedoc. – 11.90€
A blend of Grenache and Mourvèdre, bottled November 2014.  About 30% of the blend,  both Grenache and Mourvèdre, is aged in barrel.  Good deep colour. Rounded ripe spicy fruit.  Oak well integrated.  Dry spice.  Youthful tannins, and not aggressive.  Rolf and Thomas are looking for soft tannins.  A long finish, and a wine to develop.

2013 Edition, Pézenas – 16.90€
A blend of Syrah and Grenache Noir.  Deep young colour.  Quite firm and tight knit on the nose and the palate some ripe fruit, with a touch of discreet oak and vanilla.  Most of the wine is aged in oak.  Good body and weight.  Very balanced. Their aim is elegance, and that they have achieved.

2013 Icône, Pézenas  – 27.50€
70% Syrah to 30% Mourvèdre. Élevage in barrel.  Blended in December 2014 and bottled a couple of months later.  Deep young colour.  Quite solid ripe fruit on the nose, with some vanilla and cassis.  On the palate, rich and ripe with body and balanced.  Some tannin.  Lots of nuances and lots of potential.  It will be fascinating to see how it ages. 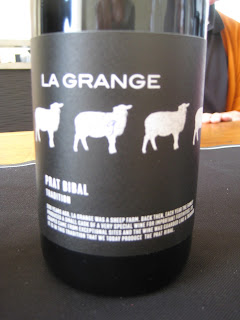 AlanM said…
I went to the opening, having tasted the wines in Montpellier too. It is a stunning set up now, clearly a massive investment and I wish them good luck. I have to say I hope it improves the wines, they were OK but didn't wow me.
11 November 2015 at 19:51

Rosemary George MW said…
I think they are gently improving. the very first time I visited them, I was less impressed and did not blog about them, but gradually in the last couple of years, and with new equipment, things are looking up.
19 November 2015 at 19:16