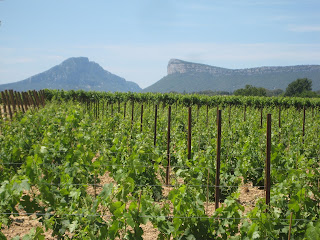 Pic St Loup hosted its annual ballade vigneronne in early June.  I hadn't done this walk for a while and it remains as good as ever, with support from most of the wine growers in the appellation, from one of the smallest with just two hectares to the larger family estates and the coopeatives. This year the walk started at Sauteyrargues in the north eastern part of the appellation. 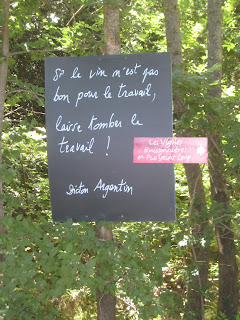 It is a familiar format - arrive for the allotted departure slot - collect meal tickets, plus cutlery, tasting booklet with pencil,  wine glass and a sunhat.  The driver is also given a breathalyser.  My friend Sandra was spitting assiduously and did not feel that she needed to use it!   In fact, our consumption was modest for the walk was taking place on one of the hottest days of the year, with the thermometer hitting 30°C and more.   Tasting conditions were far from ideal, with red wine in ice buckets, as well as white and pink, but the vignerons remained cheerful and welcoming, despite the testing conditions.  And we took it gently.  The walk began with a welcoming shady track through woods.  Blackboards had been erected along the way with various appropriate sayings and extracts of poems. 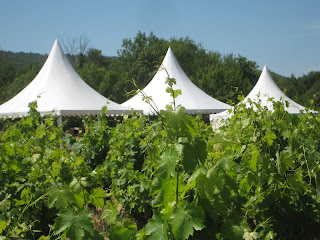 The first étape was the mise en bouche, a tasty croustillant of squid, with fennel and black olives.  And for wine, there were rosés and whites.  I tried Château l'Euzière, l'Or des Fous with a touch of oak and some white blossom, and an estate that is new to me, Domaine la Costesse, Premices, also white, but riper and richer, and a blend of 70% Grenache blanc and 30% Roussanne.  Domaine Zumbaum rosé was fresh and crisp, while Château de Valflaunès, Par Hasard, was more structured with good body and acidity. 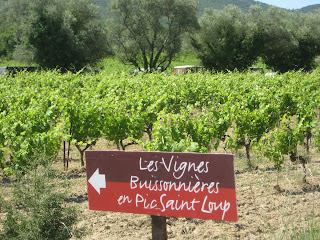 Next came a raviole de pot au feu, in other words a large ravioli with a meaty filling in a tasty juice.  I couldn't resist trying a wine called Domaine Inebriati, Orea, it was a Vin de France, a pure Terret, with some firm fruit and rounded palate, with intriguing herbal notes.  Terret blanc is making a bit of  a comeback.  Abbaye de Fenouillet was a blend of six different grape varieties, with some ripe white blossom and a dry finish.   Bergerie du Capucin, Dame Jeanne 2015 was ripe and rounded with some notes of black tapenade and supple tannins.  Château de Cazeneuve, les Calcaires was a lovely combination of tapenade and ripe fruit balanced with a streak of tannin. 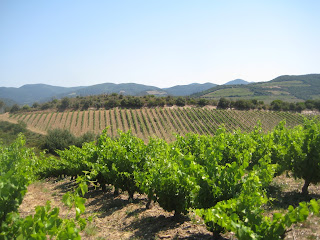 We wandered through the vineyards with fabulous views of the Pic St Loup and the dramatic cliff face of the Montagne de l'Hortus.  Domaine de l'Hortus, Bergerie de l'Hortus was nicely rounded with white blossom and fresh acidity and drinking beautifully with a filet de loup with some leeks.  This one did get swallowed.  Mas de Farjou, les Hautes Terres, was a blend of Marsanne, Rousanne, Viognier and Grenache blanc, with some oak which made it quite firm and dry. 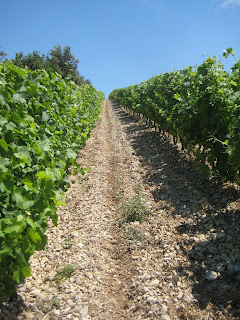 The main course, a slab of duck breast, was set up by the little Romanesque chapel of Notre Dame d'Aleyrac, where there was a small exhibition by a local artist, Thomas Verny, of pictures focussing on local scenery.   Domaine l'Hortus, Grande Cuvée, was nicely firm and mineral, with stony red fruit. That got swallowed too.  So did another favourite, Mas Bruguière, la Grenadine, which had some youthful red fruit.  2011 – most people were showing more recent vintages - Château Lascaux, les Nobles Pierres, was firm and leathery, with some ripe tapenade fruit and nicely evolving.  Château Puech-Haut, a newcomer to Pic St Loup,  was dense and oaky, as was Domaine Christophe Peyrus.  Mas Peyrole, a blend of Syrah, Mourvèdre and Grenache, was nicely rounded with balanced fruit and tannin.  And the cooperative of St. Mathieu de Treviers, les Vignerons du Pic, Tour du Roc was ripe and rounded with a streak of tannin. 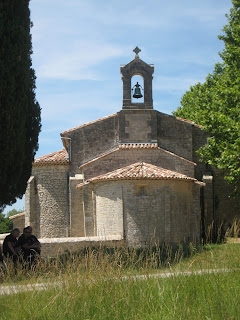 The cheese course was at a refreshingly breezy spot by the ruins of an old charcoal burner's home from the 1960s.  Pierre Clavel of Domaine Clavel was pouring his Bonne Pioche, which was ripe and rounded with some tapenade fruit.  And at the neighbouring barrel was Marie-Danielle Brubach who has just two hectares of vines, in four plots, planted with Syrah, Cinsaut and Grenache.  Her wine was fresh and peppery.  She took a roundabout route to wine and the Languedoc from Strasbourg via Paris and has been making wine since 2007.  And there were white wines too.  Château Cazeneuve was rounded and satisfyingly complete.  Château de Valflaunès, Pourquoi Pas? had a stony nose, with a rounded biscuity palate.  In contrast Domaine St. Daumary was based on Vermentino and was firm and fresh.  Domaine la Triballe has benefitted from the extension of the area; their white wine is a blend of Vermentino, Roussanne, Marsanne and Viognier, which packed some ripe peachy fruit on the palate. 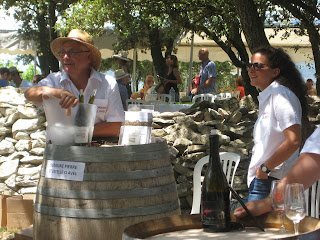 And the final étape was an elegant dessert, an entremet au chocolat blanc and caramel with fruits rouges.  It has to be said that Pic St Loup is not really the ideal accompaniment to a dessert, so I tasted first. This étape was also less crowded; people were obviously lingering over their meat and cheese courses, as there were many more wines to try than I have described.  Clos Marie blanc, Manon was elegant and structured, made from Roussanne, Marsanne, Clairette and Chardonnay, aged in vat.  Clos Marie really suffered with the hail last year, with 95% of their vineyards affected, so this wine was made from bought grapes.  Mas de Fournel was a blend of Vermentino, Roussanne and Marsanne with some rounded ripe fruit.  Domaine Desvabres was a blend of Chardonnay, Bourboulenc and Vermentino with some firm fruit and crisp acidity.  Château la Roque rosé was pale in colour with red fruit and a soft finish.   And the last wine of the walk, but not of the day, was a red, Domaine les Grandes Costes, which is predominantly Syrah with 15% Grenache and 5% Cinsaut, given 15 months élevage.  It was rounded and ripe with some supple tannins, making a good finale.   Despite the heat, it was a grand day out. 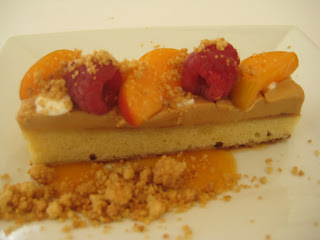