Ageability in the Languedoc 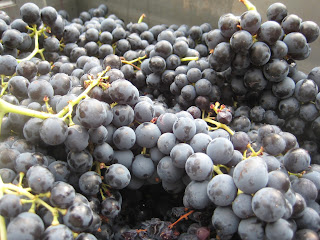 Many apologies to regular readers of my blog.  I do feel that I have been neglecting it over the past few weeks.  However, my excuse is a good one.  I have a deadline for the end of November to write: The wines of the Languedoc, so am beginning to feel the pressure, but not panicking yet, well only at 4 a.m. rather than 4 p.m.  September has seen me doing some pretty intensive cellar visits, totting up 50 vignerons, and vigneronnes, from Malepère to Sommières.    One of the things that has struck me is the ability of so many wines to age in bottle.   Ageability is an essential prerequisite of any wine with pretensions to quality, and indeed to greatness, and that is something which has not really been much considered in the Languedoc.   However attitudes are gradually changing. For a start, most wine growers now have cellars suitable keeping bottles during the summer heat.

Let me give you a few examples of wines that I have tried over the last month, which for me have aged beautifully and were really worth the wait.

Mas d’Alezon
Mas d’Alezon is one of the leading estates of Faugères, but only developed by Catherine Roque since 1997.  The 2000 vintage is still a Coteaux du Languedoc, as Catherine lacked the necessary Mourvèdre for a Faugères.      The wine has aged beautifully, with subtlety and nuances, with notes of the garrigues, and some leathery hints, with a long lingering finish.   It has reached cruising altitude, and it is anyone’s guess as to how long it will stay there.

Roc d’Anglade
From Remy Pedreno at Roc d’Anglade in the village of Langlade.  I happened to visit the day after a good friend who is a rather important sommelier had visited.  And I was lucky as I got to taste even more bottles than I might otherwise have done.   Essentially the blend of Remy’s red wine is 50% Carignan, a grape variety that he really likes, with  25% Mourvèdre, and the balance made up of Syrah, Grenache and Cinsaut.   The 2009 was quite rich and leathery, with a hint of animal, in the nicest possible way, with rounded supple fruit and depth and length, with an elegant finish.  2008 was a late harvest after a cool summer, and the wine had some fresh herbal notes, and a touch of cedar.  The tannins were very silky.  Remy observed: ça pinotte.   The 2004, a blend of 50% Carignan, with 25% each of Syrah and Grenache Noir, was firm and smoky on the nose, with garrigues and herbs on the palate, with some structure, but also a sweeter note.  It was very intriguing.   And our tasting finished with Remy’s white 2006, a pure Chenin Blanc, with dry honey and good acidity, and lovely texture. 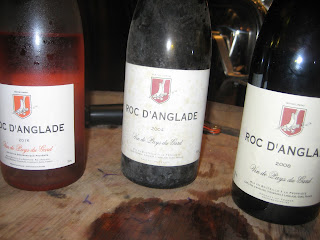 Domaine Dufès
It was the morning for mature bottles, as next we went to see Remy’s neighbour in Langlade, Elisabeth van der Bent, at Domaine Dufès      And here our tasting finished with her 2004, which had a rich, almost Pinot Noir nose, and the palate was riper, but possibly less elegant than Remy’s 2004, but delicious none the less.     Elisabeth observed that it was fermented on its stalks, which possibly had given it more ageing potential.

Mas Haut Buis
Up in one of the most northern parts of the Terrasses du Larzac, I went to see Olivier Jeantet from Mas Haut Buis, who has vineyards in the village of Lauroux, just below the Pas de l’Escalette.  After tasting his current vintages, Olivier opened his red 2002 Costa Caouda, which was just his fourth vintage, and a simple Coteaux du Languedoc.  It is a blend of 40% each of Carignan and Grenache Noir, with 20% Syrah, and still seemed remarkably youthful, with some silky tannins and balancing fruit. 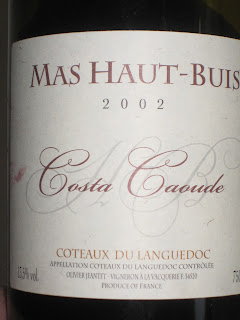 Domaine la Croix Chaptal
And it is not just the red wines that age.  I had two real surprises with white wines.   Charles-Walter Pacaud at Domaine la Croix Chaptal is just about the only independent producer to take the appellation Clairette du Languedoc seriously, and he treated me to a vertical tasting of his Clairette, from 2015 back to 2007.  The wines had all evolved beautifully, with richness on the palate, with weight and complexity, notes of honey, sustained by a streak of acidity and what seemed like a streak of tannin, or a streak of bitterness.  Charles-Walter treats his grapes like Chardonnay in Burgundy, keeping the wine on the lees in barrel, with some skin contact while filling the press.   Any bitterness is a positive note in Clairette.  The 2008 was elegantly honeyed, with hints of  quince, and a rich finish, while the 2007 was surprisingly fresh and herbal with more acidity. 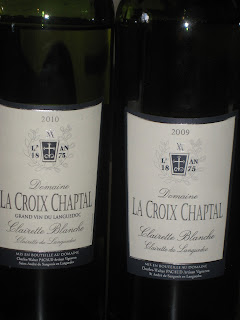 Domaine de la Rencontre
And the second surprise was in Mireval, with Pierre and Julie Viudes at Domaine de la Rencontre.  They opened the Muscat Sec from their very first vintage of dry Muscat, the 2010.  There was a slightly petrolly note, reminiscent of Riesling, with good acidity and fresh fruit and a slightly toasted note on the finish.  Again, the wine was remarkably fresh for its age. 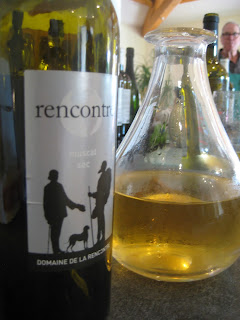 Per and Britt, BKWine said…
I would not necessarily agree with your point of view that ageability is a prerequisite for a wine being great or even simply good. In my view, a wine can be great without being old and a wine is not better per-se by being old (often the contrary).

But I could not agree more with you on that Languedoc wines have great ageability.

Both very, very nice. And certainly not particularly expensive.

So if you do like old wines, then Languedoc is a good choice. As well.

Rosemary George MW said…
Thank you for that comment Per. I agree that a wine can be good, without having any ageing ability, but I do think that a wine that is truly great must have the ability to develop in bottle; otherwise it is static. Can you think of any great rosés? Good ones, yes, but not great.
6 October 2017 at 10:47

Aaron L. said…
What about Domaine Tempier Bandol Rosé or Clos Cibonne? I think they achieve some level of "greatness".
3 January 2023 at 04:46