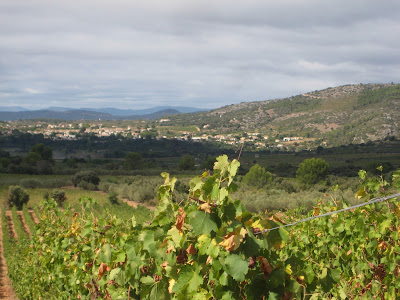 I went to a fascinating tasting last week, hosted by the Institute of Masters of Wine.  St Chinian is a rare appellation to have two distinct terroirs, limestone in the south and schist in the north, with the two areas separated by the river Vernazobre. There is also a little bit of sandstone, but essentially the originality of St Chinian is its dual terroir.

Two St Chinian growers, Vivien Roussignol from Domaine des Païssels and Tom Hills from Domaine la Lauzeta, were in town with a collection of wines selected with the precise aim of illustrating the differences between the two terroirs for each grape variety of the appellation.  We tasted brut de cuve, wines from the 2017 vintage, that were vat samples, and all fermented in more or less the same way, a classic vinification with no carbonic maceration and no élevage in barrel, yet.   The idea was to see the differences between the two soils and how each variety performed on each soil.  St Chinian is always a blend of several grape varieties, so ultimately all these wines would find their way into a finished blend.

Sadly, the tasting was incomplete in that three wines went AWOL in transit between London and St Chinian, but that did not prevent us from observing differences.   We kicked off with a pair of Grenache Noir, one grown on limestone by Château Viranel, and the other on schist by Vivien Roussignol.    The difference was quite marked.  The wine on limestone was firmer and more structured, with good fruit and tannin, whereas the wine on schist was more fragrant, with fresh acidity and perfumed fruit.  It was actually a heady 15.8, as opposed to 14.8 for the Viranel, but certainly did not taste at all alcoholic.  Sadly, a pair of Grenache from Clos Bagatelle, on limestone and on schist, as they have both soils, were missing.

Next came a lone Carignan from Domaine des Païssels, grown on schist.  The limestone example from Mas Champart had also gone walkabout.   This wine showed just how delicious Carignan can be, with ripe fruit balanced with some firm tannins.  It was significantly sturdier than the Grenache and comes from very old vines, some 100 years old.  Vivien observed how well Carignan had coped with the drought conditions of 2017.

Two limestone Syrah, from Château Viranel and Domaine Sacré Coeur, were contrasted with three Syrah grown on schist, from Moulin de Ciffre, la Lauzeta and Domaine des Païssels.   All five wines had a deep purple colour.  There was a contrast between the two limestone wines in that Château Viranel was firmer and more tannic and structured, while Domaine Sacré Coeur seemed lighter and more fragrant.  Maybe the wine had spent less time on the skins.

Although all three of the schist wines had good acidity, the Moulin de Ciffre was the freshest of the three, with some perfumed red fruit, while la Lauzeta and Païssels seemed riper and more substantial.  I was also more aware of the alcohol levels in these wines.  Sacré Coeur was the lowest at 14.5 whereas Lauzeta and Païssels up clocked 15.4 and 15.5 respectively.   It made me think that Syrah is sometimes less suitable and less adapted to the dry warm conditions of the Languedoc; more than ever it is time to reconsider Carignan.

The final comparison came from the same estate, Borie la Vitarèle, which also has both terroirs, with a blend of 60% Syrah with 40% Grenache, one from limestone and the other from schist.  The wine from limestone was rounded with ripe spice and firm tannins, whereas the wine grown schist was fresher with more acidity and elegance.

Schist soil is generally deemed to make for wines with fresh acidity and that was certainly borne out by this tasting.   Indeed, the conclusion was, if you see the flavour of a wine as a shape, as I often do, limestone makes for more horizontal wines, whereas schist gives wines that are vertical in profile, with more depth.   And by way of a postscript, the next day I went to an utterly delicious Riesling tasting hosted by Jean Trimbach who made exactly the same observation in the context of Riesling in Alsace, that limestone makes for horizontal wines, whereas Riesling from granite is vertical in profile.
Email Post

charlie said…
Perhaps I'm being overly picky but 'and all fermented in more or less the same way' allows for variation apart from the soil. There is also an assumption that both areas enjoyed the same weather conditions that year. Is that the case?
13 March 2018 at 12:09

Bob Rossi said…
We visited the St. Chinian area a couple of times, including a week in Roquebrun and a visit to attend the fete celebrating the Berlou and Roquebrun appellations. One thing I noted was how often the schist/limestone dichotomy was mentioned, with some wineries even having displays of actual schist and limestone in their tasting rooms. I can't recall any French wine region that I've visited putting that much emphasis on soil differences.
13 March 2018 at 14:41

Rosemary George MW said…
Charlie - thank you for picking me up on a wooly comment. What I really meant was that they were all a classic vinification, destemmed, and no carbonic maceration. Obviously details like length of time on the skins and temperature would vary. It is one appellation so the implication is similar weather - the southern part of the appellation may be slightly warmer, but essentially the same.

Bob - St Chinian is very aware of the dual terroirs; there are other appellations like parts of Alsace, Roussllon, Pezenas, to name but three that have a real mix of soil types, but you are right, St chinian prides itself on the contrast - but also of course wine-making styles come into play.
14 March 2018 at 10:31