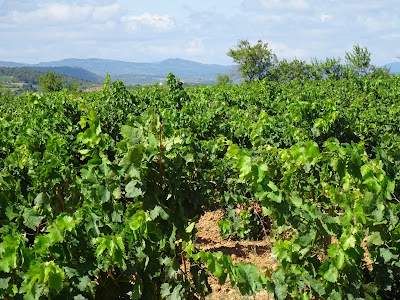 Domaine Ollieux-Romanis is one of the leading wine estates of the Corbières cru of Boutenac, with the owner, Pierre Bories, playing an important role in helping to establish the cru.  The estate did not feature in Wines of the Languedoc for the simple reason that I could not write about everyone, and preferred to concentrate on newer estates.   Wine has been produced at Ollieux-Romanis since the 1820s, with the estate passing through the females of the family.  Pierre is the exception, taking over from his mother when she retired 18 years ago.  His father was a lawyer.   Ollieux-Romanis covers 60 hectares, all farmed organically at the foot of the Massif de la Pinède, with vineyards looking south east towards the sea.  The maritime influence is significant for the terroir of Boutenac.  Then there is a second property Domaine Champs du Muraillet at nearby Fabrezan.

Ollieux was originally one property in the 1820s and then it was divided between two sisters, and stayed that way, as Château Ollieux, and Château Ollieux-Romania until 2006, when Pierre bought out his neighbours.   Romanis originates from a lieu-dit, the name of a valley on the property.

We looked at the vineyards which are in one enormous plot around the property, on grès or sandstone; in contrast most of Boutenac which iis clay and limestone,.  Neighbouring Fontsainte and Ollieux-Romanis are alone in having grès, which is an advantage as it does not retain the heat during cooler nights, and makes for fresher wine, with less concentration.   Pierre admitted that when he first started making wine, he looked for concentration, but no longer.   We admired his 60 year Carignan vines at the foot of the Massif.  The dominant wind is the drying north wind, but they get the Marin at night coming from the sea, making for a cooling effect.  The appellation of Boutenac is in the pipeline, but not yet finalised, with the commission visiting the region imminently.

The weather this spring has been a problem, as for everywhere in the Languedoc.  The annual rainfall is usually about 530-400 mm rain; this year they have already had 800 mm, which has caused mildew, noticeable for the brown stains on the leaves and dried up bunches that have barely formed.  Pierre was not too unhappy, as the flowering went very well, with une belle sortie, so he can afford to lose a small amount of his crop.  Carignan and Syrah have been particularly affected by the mildew.  However, he would be treating for the 11th time, in the middle of July, as opposed to the sixth time at the same stage of a normal year.  His average crop is about 35 hl/ha; 40 hl/ha would be even better.    Three quarters of his grapes are handpicked and this year he envisages starting the harvest about  3rd September, ten days later than last year which was a particularly early harvest.   He observed that maturity or ripeness is the result of an accumulation of temperature.

We looked at his cellar, in one of the traditional old Languedoc buildings, so typical of the wine industry. and built in 1896.  A new cellar is planned, with the building permit just agreed, not to mention the bank loan!  There is a large pneumatic press and plenty of stainless steel vats,  all with emperatures control, and double skins, which are very easy to clean, just ten minutes with hot water, as opposed to an hour and a half or two hours for a concrete vat.  The building is insulated as well as having very thick walls, and part of it goes into the hillside.   Pierre is insistent on the importance of temperature; it can speed up or slow down the fermentation.   He uses natural yeast and as little sulphur as possible and he prefers slow fermentations, what he calls an infusion, at a low temperatures of 17º - 19ºC.   He observed that 'we are recreating the character of Corbières'.  20 years ago it was a vin costaud that went with wild boar; these days he hopes people drink it with things other than sanglier.

Carignan is the backbone, with at least 40% in the blend.  But for Pierre, Corbières has fruit and elegance - it is no longer massive.   Pierre explained how alcohol makes for the extraction of matière; with a slower extraction at a lower temperature, whereas it will obviously be faster at a higher temperature.  2017 was the longest fermentation - 35 days - whereas it usually 25 days, and when he first began making wine, only about 12 or 13 days.
If he can, he uses nitrogen to protect the wine against oxygen, instead of sulphur,  but he does not want to be labelled vin nature.

He favours 600 litres barrels, as they give a good balance and surface ratio between wood and wine.   He began using them about 7 years ago, and still has some of the demi-muids he first bought; they give interesting results, and for his white wine he uses as much as 70%, as opposed to 40% for red wine.  He favours Stockinger, and also the Tonnellerie de Mercurey, Vallaurine in Beaujolais  and Boutes in Narbonne.

And we tasted in the original house of the estate, built in the 1800s, with a pretty double staircase outside leading to the first floor.   At that time the ground floor was the servants’ quarters, where the tasting room is today. 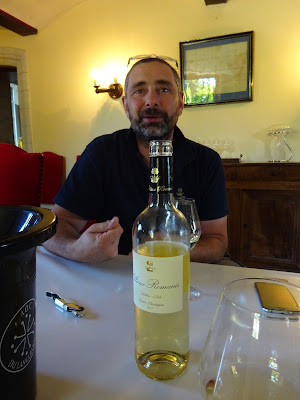 2017 Cuvée  Classique Blanc - 9.00€
A blend of 30% each of Marsanne and Roussanne, 25% Grenache Blanc and 15% Macabeo. The fruit of young vines and blended in January.  A very perfumed nose, with lemon and herbs, and a rounded palate, with refreshing acidity.  Pierre picks his whites quite early to retain the acidity.  There is an élevage in vat on the fine lees and some skin contact for 48 hours.   After pressing, the juice is stabilised at 0ºC and Pierre works on the lees, extracting flavour for  about a week, but without any alcohol.  He then starts the fermentation with some lees and the temperatures rises, unto about 20ºC over five or six days.  The wine stays in vat on its lees until bottling, which gives some appealing mouthfeel.    Pierre’s white vineyards account for 10 out of a total of 60 hectares.

2017 Corbières rosé - 9.00€
A blend of Grenaches, 15% Blanc, and 30% Gris and Noir, with 15% Cinsaut.  All pressed grapes with a four hour maceration on the skins.  Grenache Blanc and Grenache Gris make for a lighter colour.  If possible all the grapes are picked together, depending on their ripeness, so blending can be immediate, or else they are picked separately and blended later.  But ideally they all fermented together and the vinification is essentially the same as for the white wine.

2017 Cuvée Prestige Blanc - 21.00€
A blend of Marsanne, Roussanne and Grenache Blanc, from 25 year old vines.  All aged in demi-muids for about ten months.  Some bâtonnage and work on the lees.  A little colour.  Lightly oaky nose and a ripe rounded palate with good acidity.  A long buttery finish, but still not yet really knit together as it was only bottled ten days previously.  Lots of potential  and complexity.  Pierre’s mother planted Marsanne and Roussanne as she wanted to compete with the Rhône Valley.

They also make a cuvée nature for The Wine Society, Le Blanc, from 30% each of Carignan blanc and Macabeo and 20% each of Grenache Gris and Blanc, vinified in old barrels, but it was sold out.  So I was out of luck.

2017 Lo Petit Fantet d’Hippolyte - 9.00€
Fantet is a child in Occitan and the wine is a blend of Carignan, Grenache and Syrah, about one third each, but with Carignan the dominant variety.  Lovely spicy red fruit, balanced with some tannins and best served chilled.   The idea was something completely different; what Pierre called modern Corbières, and very fresh. and fruity  The grapes are destalked with several pigeages and remontages. 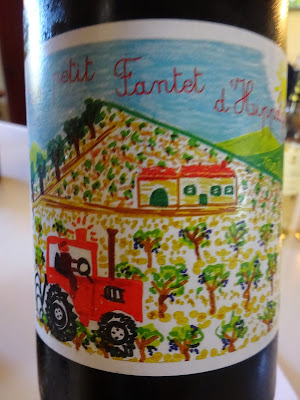 45% Carignan with Grenache Noir and Syrah, fermented and then aged in vat, blended in January, and bottled in November.  Very deep purple red colour.   Very garrigue on the nose, with more Carignan.  Sturdier.  Very good spice and fruit.    The freshness and structure of Carignan -''le cépage que je préfère'.  It is very adapted to the region, giving tannin, structure and fruit.  About 40% of the cuvée is vinified by carbonic maceration, a process that Pierre likes for its interesting fruit , but he admitted that he likes it less than before, as the fruit is quite obvious and now he favours more restraint.   He also called it a vinification de fenéant, as there is nothing to do while it is fermenting.

2016 Corbieres Boutenac Rouge Prestige - 15.60€
with a lot of Carignan and some Grenache Noir, Syrah and Mourvèdre, kept in wood for about 11-12 months.   Deep young colour.  solid rounded ripe fruit; ripe berry flavours and nicely mouth filling with a fish finish.  And all very harmonious and beautifully knit together.  ‘As Pierre put it, 'pas de combat’ as nothing is fighting on the palate.  For Boutenac the proportion of Corbières is a minimum of 35%, and there is an obligatory élevage of 12 months, including in bottle.

2015 Atal Sia - 23.00€
Bottled in November 2016.  Atal Sia means in Occitan, ainsi soit-il. or so be it.  It is a sélection parcellaire and usually comes from the same plots, with a lot of Carignan, as much as 50%, as well as Grenache and Mourvèdre and just 3% Syrah, and no élevage in wood, but rather an élevage in bottle.  Syrah is not suitable for the top of the range, as it is too généreux or generous.

And this is fresh, but concentrated, with fresh ripe cassis and spice.  It is quite rich and seemed quite high in alcohol.   Almost 100% carbonic maceration, except for the Syrah, making it ripe and subtle but with a fresh note on the finish.

2016 Cuvée Or
This comes from the same terroir, with the same sélection parcellaire as Atal Sia, and is made 80% by carbonic maceration, with the malo in wood.  It is a blend of Carignan, Grenache, Mourvèdre, with a little more Syrah, possibly 10%, all vinified together.   Very intense with rich black fruit; very round ripe, with firm tannins, quite fleshy.  The oak is present but not aggressively so.

OR is not gold, as you might think, but the initials of Ollieux Romanis, and ollieux refers to oliviers or olive trees.  Pierre observed that 2015 was a year of sunshine, whereas 2016 made for wines with more tension. 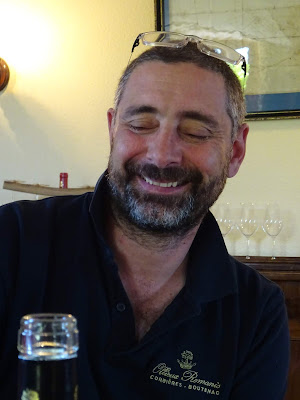