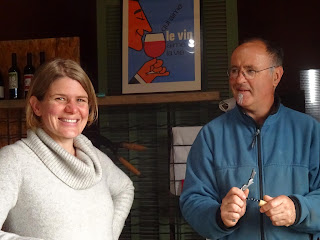 Thanks to my friend Emma Kershaw, I spent a day in the Corbières and discovered two new wine estates.  Domaine Colline de l’Hirondelle was created by Jennifer Buck and Didier Ferrier.  Jen is a highly articulate Californian.  After environmental studies, she came to France to teach English, and met Didier whose father had vineyards.  Didier was also a rugby player and employed by Vignerons Val d’Orbieu to run their internal communication.  And when Didier’s father retired, they decided to take over the best four hectares of his 30 hectare estate; he was a member of the village cooperative at Douzens.  So they arrived in 2007, and made their first wine in 2008.

Their house and winery are well positioned on a hill outside the village, with some vineyards nearby.  They have old Carignan, plots that are both 70 and 100 years old, as well as Syrah, Grenache, Mourvèdre, and unusually Chenanson for red wine, and for white, Roussanne which they planted in 2010. Since then they also planted some Grenache Gris, in 2012.  They have been organic since the beginning.

We talked about all the problems in the vineyard.  For vers de la grappe, pheromones inducing sexual confusion work well.  Vers de la grappe break the skins of the grapes, and that lead to problems with acetic notes.  I need realised but even organic insecticides are harmful to bees.

Mildew is not usually problem either, with 2018 the one exception. Six kilos per hectare per year is the limit for copper; they rarely use more than 2 kilos, and in 2018 they totalled four kilos. Mildew apparently reduces the quantity but does not actually have a serious impact on quality; however it concentrates the ripening grapes, reducing the yield, and that is a problem.  An attack of mildew when the Grenache was in flower last year had a big impact.

Oidium is not usually a problem, though old Carignan can be sensitive to it, but for that you can treat with copper.  Oidium dries up the grapes so that the berries cannot grow, and so they explode, and again that gives rise to bacterial problems.

Essentially Didier works in the vineyard and Jen is the wine maker.  As for the name of the estate, Hirondelle is the name of their hill on the village cadastre. 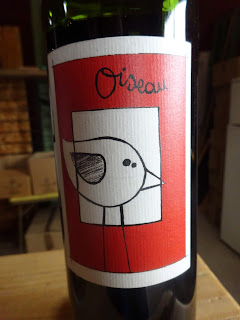 2018 Roussanne Nébulo, Vin de France - 11.00€
Light golden colour. White blossom on the nose.  Rounded and a slightly bitter finish, but in a nice way.  Crisp and lightly herbal.  The wine is cold settled; there is no malo as they want to retain acidity,

2017
To compare.  This was much more ready.  Nicely balanced with good fruit and more depth.  It had lost its slightly bitter note, and had developed some satisfying nuances of flavour.

2018 Ventilo, Rosé, Vin de France
Pure Chenanson, which is a cross of Grenache Noir and Jurançon Noir.  Produced by INRA to help the cooperatives of the south, but it has never been accepted in any appellation  Orange pink colour. Quite rounded fruity nose.  Fresh acidity and some body.  They use free run juice  and there is no malo, so the skin contact time is about an hour.  The skins are very dark.

2017
Orange pink colour.  Nicely mouth-filling.  The palate had developed some rounded fruit in a satisfying way, with a creamy finish.  Jen observed that their rosé is always better after a year.  I agreed.

2014 Cocolico, Vin de France - 8.50€
A blend of Chenonçon, Grenache and Syrah.  Quite deep colour, with a ripe nose and a supple tannic streak on the palate, with rounded fruit.  About five days skin contact before pressing.  The first juice is used for rosé, to help give more concentration to the red wine.

2016 Cocolico
A blend of  80% Chenonçon with Mourvèdre.  No wood.  Kept in vat.  Good colour.  More fruit on the nose and palate than the 2014, and more fleshy, with a hint of vanilla.  Quite a ripe juicy finish with more depth.

Oiseau 2013, Vin de France - 9.80€
A blend of Carignan, Grenache and Syrah - it could be Corbières, but they prefer to avoid the administrative hassle of an appellation.  No oak, but lots of bottle age.  Medium colour.  Rounded, supple spice on the nose and palate.  A certain dry leatheriness and a sympa rustic note.  The tannins comes from ripe pips.

2014 Carignan 1515 - 12.80€
The bottle of Marignan was fought in 1515 on the French Italian border.  Quite a deep young colour.  Firm berry fruit, with a sympathique rustic tannic streak and some peppery fruit.  Elevage in vat, apart from just one barrel.  They only make 1200 bottles of this altogether.

2013 La Joupatière - 28.00€
Named after a lieu-dit, a steam and the oldest vineyard in the village, surrounded by a stone wall.   The grape variety mix is extraordinary with Carignan, Grenache, Syrah, Mourvèdre, Cinsaut, Grand Noir de la Calmette, Ribeyrenc noir, Morastel Bouschet noir, Terret, Noir, Gris and Blanc, Chasselas, Olivette, which can also be a table grape, with the shape of an olive, and Valenci rose, as well as two varieties that they have been unable to identify.  The plot, just 40 ares,  was planted sometime towards the end of the 19th century, and some vines are on their own roots.   They literally saved it from being pulled up.

Deep colour.  quite solid rounded nose.  Quite furry tannins. Ripe brambly fruit with firm tannin.  A rustic note on the finish, and wonderfully characterful.   They have a small basket press which they use for it, and then it goes into small vats.  the fermentation takes a couple of weeks.

2012 is all drunk, so next came 2011 - a heady 15.5º  Quite a deep colour with dense ripe fruit. A juicy rounded palate, with some spice and mouth-filling flavours.  The labels have a mobilette, in memory of Léon the original owner, whose mode of transport was either a mobilette or a tractor.

2010 - the first vintage.  Good deep colour.  The flavours are beginning to mature. with solid dense ripe fruit on the nose and quite sweet fruit on the palate.  Ripe, rich and dense, but not heavy.   Notes of chocolate.   Well balanced with a long finish.

You sense that Jen and Didier are very happy producing a characterful and distinctive range of wines, with some wonderfully original labels designed by a friend.   They have no desire to grow any more. 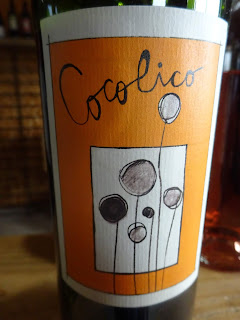 Per and Britt, BKWine said…
They make great wines! I actually discovered them a few years ago thanks to you, when you and I met in Carcassonne for the Millesimie & Terroir and you introduced me to a friend of yours, wine merchant in Carcassonne. He took me to visit l'Hirondelle. And now they're in our book that came out earlier this year. :-)
/Per
1 July 2019 at 08:47

Rosemary George MW said…
I remember introducing you to Alex. and I am sorry I did not see them in time to include them in my book. And there will be a post about Alex's shop in Carcasonne and some more new discoveries sometime soon.
1 July 2019 at 10:36