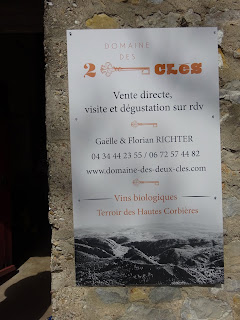 Florian Richter explained how his father is a wine importer from Dortmund, so wine was firmly in his genes.   He studied wine commerce at Geisenheim, and then worked with various wine producers, at Domaine du Capitoul on La Clape, in Châteauneuf-du-Pape, chez Beaucastel, at Maison Champy in Burgundy, where he met Gaëlle, who is a Burgundian, but her family have no vines.  She studied oenology at Dijon, then they travelled the world, to the Napa Valley, Te Awa in New Zealand, and worked with Alberto Antonini in Tuscany and then in 2012 they arrived in the Languedoc.  Gaëlle found a job with Pierre Clavel while Florian worked with Claude Vialade at Domaines Auriol.  They were living in Puechabon at the time, and decided to look for vines, finding some in St. Jean de la Blaquière, but it was too expensive to build a cellar there.  And then they found this property in 2015, a cellar with a house above, and 12.5 hectares of vines in the village of Fontjoncouse in the heart of the Corbières.

They are high vineyards, the village itself is at 275 metres, and the vineyards go up to 330 metres.   It is a cool site; the vines are old, with Carignan an average of 80 years.  They have eight varieties altogether, mainly Carignan for red wine, with Grenache and Syrah, and for white, Grenache Blanc and Gris, Vermentino, Macabeo and Roussanne.  The vineyards were already farmed organically.   The previous owner was a Parisian banker; he also had gites, which he has kept, preferring to sell the vines.  The estate was originally called Val Auclair.  Altogether they now have 14 hectares, starting initially with just with 4 hectares.

As for the two keys, Florian observed that he and Gaelle compliment each other; we each have our own key. The previous two years have been tough; in 2016 they lost 20% of their crop to frost and in 2017 50%.     And in 2018 there was mildew.  Altogether they make two white wines, one rosé and four reds,  2015 was their very first vintage.

In true Burgundian style, we tasted barrel samples.  First came Roussanne, grown on three different geological sites, tertiary era, jurassic with shells, and triassic with quartz and volcanic rocks, but all essentially argilo-calcaire.  2018 was their first Roussanne vintage, and Florian is inspired by his work at Beaucastel.  He makes wine as you would Chardonnay in Burgundy.  The grapes are trié à la vigne, and whole bunch pressed, with a new pneumatic press; the juice is then débourbé, and they use natural yeast, with the fermentation beginning in wood, but not new wood.  There is a malo-lactic fermentation, but no bâtonnage.  Tasted from barrel, the wine was fresh, almost lemony, herbal with white blossom, with some satisfying weight.  It will have been bottled in May, as Jeu de Clés, Vin de France - 18.00€

Next came a Corbières Blanc, from 50 year old Macabeo vines, 60%, with Grenache Blanc and Gris, and Vementino, with a firm dry note on the nose, and on the palate some dry herbal notes, with fresh acidity and understated fruit.  And also an appealing saline note.  Ten per cent of the wine is fermented in vat, with the rest fermented in barrel with a very small amount of new oak.  Florian favours barrels from Damy, with a fine grain and a light toasting.  He also talked about Chassin, the new cooper who is popular in Chablis.  'You have to fall on your knees and beg'. They only make 5000 barrels a year, half of which go to Burgundy, but he was lucky; because of the frosts in Chablis in 2017, he was able to buy some.  Florian is convinced that the Languedoc can produce great whites.

2018 Clés en Main, Vin de France - 14.00€
70% old Carignan, planted in 1950 and 30% Syrah, the oldest Syrah vines in the village, planted 40 years ago.   The aim is a lighter style, an entrée de gamme. Fermented and aged only in vat. The Carignan is whole bunch pressed and given a shorter 15 day maceration.  Nonetheless a deep colour. Fresh red fruit with a touch of spice.  Medium weight, dry spice; a streak of tannin; dry cherries, griottes.  A croquant, crunchy quality.

2018 Corbières Rouge - 16.00€
A blend of Grenache,Carignan, Syrah aged in vat.  Good colour.  Quite firm, fresh peppery cherry fruit on the nose and palate.  Very fresh; nicely peppery and very appealing.   Florian does not fine or filter his wines; and his vineyards are all north, north east facing, with nothing south or south west. That makes a lot of difference in the Corbières.

Next came three different barrel samples of the same Grenache, which will be Jeu de Clé.  The vineyard is at 300 metres and the alcohol a heady 15.5º, except you really didn’t notice it on the palate.  The first sample, from an old barrel, was ripe with cherry fruit, medium weight and a fresh finish.  The next was much more structured and tannic, tauter, but again with fresh fruit, while the third sample was from the new Chassin barrel, with much more obviously structured oak on the nose, though less so on the palate.  It is always fascinating to taste the quite significant differences between one barrel and another.

2018 Reserve, IGP Vallée du Paradis - 22.00€
The poetic, evocative name is the local IGP covering villages in the heart of the Corbieres. A blend of 80% Carignan, from vines that are 110 years old, and 20% Grenache, from 50 year old vines.  Blended after pressing and then all aged in barrel for 12 months.  Smokey red berry fruit on the nose and more delicious red fruit on the palate. Very appealing with a streak of tannin and a fresh finish.

2017 IGP Vallée du Paradis - 22.00€
The wood was quite apparent on the both nose and palate, with a firm tannic streak, but with good fruit underneath the oak. The wine needs to develop in bottle, and promises well for the future.

There is also Rouge des Clés which we did not taste.  You sense that Florian has lots of ideas, and things he would like to try.  He admitted that fourteen hectares is too much for them.  And they really need more space as he would like to age his white wines for longer, and keep two vintages at a time in barrel.   There is a saying that you should one harvest on the vines; one in the cellar in élevage; one in bottle waiting to sell, and the fourth sold, and in your bank account!

I was left the impression of a very thoughtful and committed winemaker.  He deserves to go far and it will be fascinating to observe his progress. 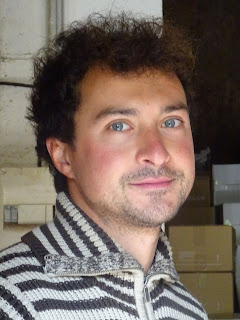 ian harper said…
Hi ,
I noted your comment that north facing vines in th Corbieres make a difference , could you elaborate ?, as some one who has bought a small plot there at 350m (0.60 H )and is thinking of which vines to plant i would be grateful of any thoughts you had
best
ian harper
1 September 2019 at 16:14