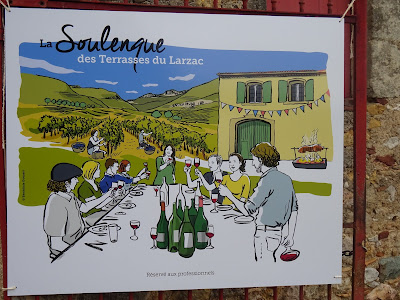 When I was first writing about the Languedoc 30 years ago, no one had ever heard of the Terrasses du Larzac.  In my book, The wines of the South of France, published in 2001, I gave it a fleeting mention.   Now look how things have changed.  The Terrasses du Larzac is today one of the most exciting regions of the Languedoc, opening up a host of vineyard sites, some of which were initially deemed too cool for viticulture when the appellation of the Coteaux du Languedoc was first created in 1985.   And in October the appellation celebrated its 5thanniversary with a Soulenque, a harvest festival, at the beautiful Château de Jonquières.    Jonquières is no upstart pinardier château from the 19thcentury, but a stunningly elegant château with a history that goes back to the 12thcentury, and always in the hands of the same de Cabissole family.  The central courtyard boasts a stylish Renaissance staircase.   I was lucky; I was staying the night and was offered a cosy room in one of the medieval towers. 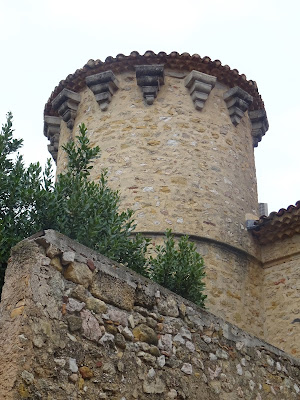 The Soulenque provided a fantastic opportunity to taste the Terrasses du Larzac, and there was more besides, with white and rosé wines, so also IGP and AOP Languedoc.   Some 60 or so wine growers took part out of a possible 104 wine estates, and four cooperatives.  Another figure worth noting is that 58% of the area of the appellation is farmed organically.

The tasting took place over two days.  It would be tedious to write (and read!) tasting notes for each of the 60 plus wine growers who were showing their wines, even though I did manage to taste most of them over two full days.  Instead I would like to mention various selected highlights, namely those wine estates who have been making wine for a number of years, with a fine quality track record.   Nor do I want to ignore the newcomers, with some people who were relatively unknown to me.  The Terrasses du Larzac certainly attracts more than its fair share of newcomers, and people new to wine-making, who have often had careers in other fields, and bring a broader vision to the region. The numbers are growing apace, with every vintage. 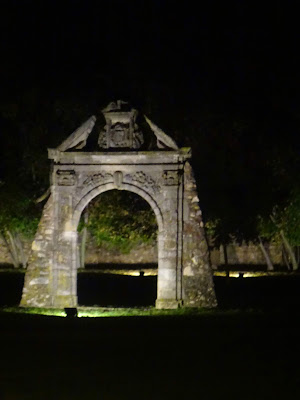 The two villages of St Saturnin and Montpeyroux come within the appellation and indeed are aspiring crus of the Terrasses du Larzac.  However, there were very few wine growers from those two villages, namely Domaine la Jasse Castel and Mas d’Amile from Montpeyroux and Domaine d’Archimbaud from St Saturnin

The new president of the syndicat is Sébastien Fillon from Clos du Serres in St. Jean de Blaquière. He and his wife Béatrice bought their first vines in the region in 2006 and have established a very convincing range of wines, based on sélections parcellaires, emphasising the variety of different soils in their vineyards. 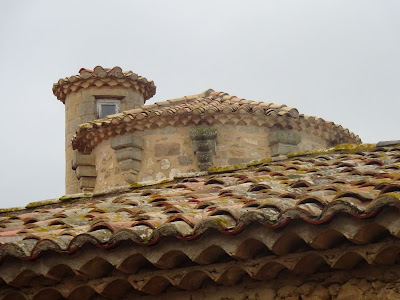 One of the longest standing and original pioneering wine growers is undoubtedly Olivier Jullien, who was showing his delicious white wine, based on Chenin with elegantly honeyed flavours, as well as a lovely range of red wines.

Vincent Goumard at Cal Demoura is someone else who has rapidly established a fine reputation for his wines.  He bought his vineyards from Jean-Pierre Jullien, Olivier’s father, in 2004. Terres de Jonquières, including grapes from each of his different vineyards, is elegantly balanced.

Frédéric Pourtalié of Domaine de Montcalmès, was showing just one wine, his red 2016, with elegant and harmonious fruit. 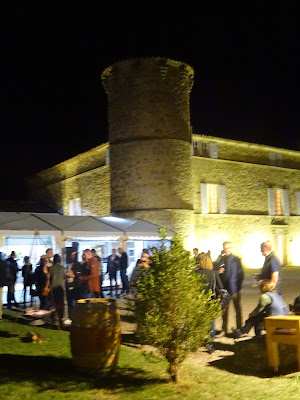 Pascal Fulla of Mas de l’Ecriture is lawyer turned winemaker and he is now working with his daughter Léa. 2015 Les Pensées, based on Grenache – you need three varieties for Terrasses du Larzac – was elegantly spicy, with flavours of cherry liqueur

I have always enjoyed the white wine of Mas Haut Buis, a delicious blend of Roussanne, Chardonnay and Grenache blanc, with firm fruit and fresh acidity after ageing, part in barrel and part in a concrete egg.  The red Costa Caoude 2017 was showing very well too.

Geraldine Laval makes a lovely range of wines at Clos Maia.  I particularly like her white wine from Grenache Gris, Chenin blanc and a little Terret blanc and Roussanne, with notes of honey, and a fresh finish.

Gavin Crisfield was showing his 2017 vintage of La Traversée, with its elegant fragrant fruit. 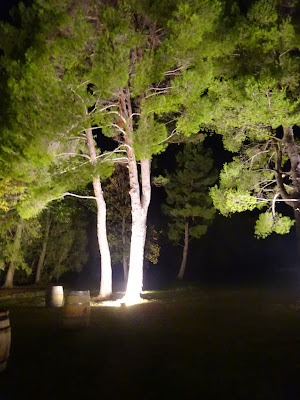 Mas des Chimères is one of the oldest estates of the Terrasses du Larzac, with vineyards around the lac de Salagou with its distinctive iron rich red soil    Guilhem Dardé’s white wine is an intriguing blend of seven different grape varieties, namely, with apologies for the list, Viognier, Grenache blanc, Terret blanc, Carignan blanc, Clairette, Roussanne and Chardonnay.  The flavours are ripe and leafy.

Xavier Peyraud at Mas des Brousses is a grandson of Lucien Peyraud, who takes credit for the revival of the appellation of Bandol, that is based on Mourvèdre.  Xavier has Mourvèdre in his genes so that grape variety features significantly in his wines, notably in la Cuvée Mataro, with 70% Mourvèdre, or Mataro.

Domaine la Croix Chaptal is the one estate that really takes Clairette du Languedoc seriously.  There was a lovely Late Harvest Clairette made from grapes picked in November with botrytis, as well as a dry Clairette, made from Clairette Rose, which is quite a different grape variety from Clairette Blanche, with rounded perfumed flavours. 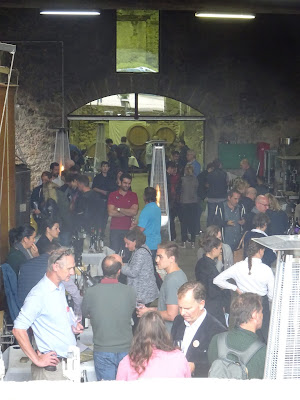 Mas Conscience is a well-established estate, which changed hands in 2012.  Eric Ajorque makes a very convincing range of wine, with the names of the cuvées an amusing play on words with conscience.   L’In, a blend of Grenache blanc, Roussanne, Vermentino and a little Viognier was a very good beginning to the tasting of their wines.

Clos de la Barthassade in Aniane was completely new to me, with some original wines, including Pur C, a pure Cinsault; K Libre a Carignan vinified in egg and vat and les Cargadous, a satisfying blend of Chenin blanc and Roussanne.

Domaine de l’Eglisette at Murles-et-Baucels was set up in 2015.  I particularly enjoyed 2017 Nuit Blanche, a blend of Grenache Blanc with some Roussanne and a touch of Viognier with some rounded fruit 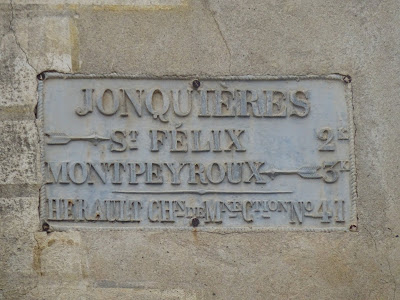 Matthieu Dibon of Le Chemin was showing vat samples from his very first vintage, 2018.   They promised very well, including some peppery Syrah, a potential Terrasses du Larzac blend of predominantly Grenache with some Syrah and Carignan, and an AOP Languedoc blend of Grenache and Syrah, with satisfyingly spicy flavours.

Domaine Nova Solis in the village of Jonquières had a first vintage in 2017.   Crépuscule 2018, a blend of Grenache, Syrah and Carignan, kept in vat, was fresh and spicy with elegant tannins and rounded fresh fruit.

I had enjoyed a visit to Les Chemins de Carabotte for my book research so was pleased to see Jean-Yves Chaperon again and to taste his Carignan, with its lovely berry fruit and fresh tannins.  A late harvest Cinsaut, picked in November was a very indulgent wine with ripe berry fruit and a balanced finish of sweetness and acidity.

Jean-Baptiste Granier from Les Vignes Oubliées, another estate based in St Jean de la Blaquière, is now producing white wine, and elegant blend of Grenache blanc, Clairette and Roussanne, aged part in oak and part in vat.  An AOP Languedoc, based on Cinsault, was very appealing, with spicy fresh fruit. 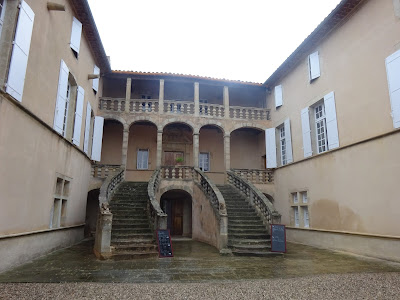 And tomorrow evening I am flying to Santiago and hoping to discover some Chilean Carignan and Cinsult, by way of a Chilean link to the Languedoc.   More anon in three of so weeks time.