Stephane Yerle works as a consultant oenologist, but rightly considered that it would give his work much more credibility if he were seen to be making his own wine, so he and his wife Cécile Garidou bought their first vines, just 1.5 hectares of old Carignan in 2000.  They now have 12 hectares, including four hectares of Carignan, both in the IGP of Coteaux d’Ensérune and in the appellation of St. Chinian.   Cécile, who is also a qualified oenologist, works full-time on the estate, while Stéphane continues to travel extensively. Their cellars are hidden away in a back street of Cazouls-lès-Beziers, in the rue Voltaire. They have been certified organic since 2006, and are working on biodynamics and on lowering their sulphur levels.  Stéphane filters his wine quite tightly, and talked about the need for precision and what he called technicity 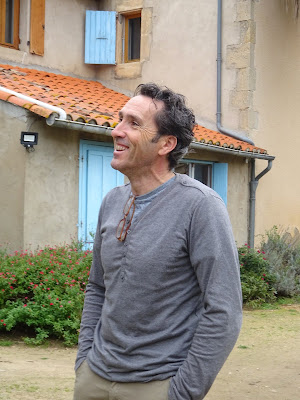 Earlier in his career Stéphane worked with the Madiran winemaker, Patrick Ducornau, on micro-oxygenation and he talked fluently the outils d’élevage.  He is now working with the only French producer of amphorae, Olivier Beliveau, in Castelnaudary.  Carignan is one of his enthusiasms, but Carignan can be tricky.  It does not like too much wood, which can mask the flavours, so Stéphane keeps his half in amphorae and half in demi-muids.  Carignan works really well in amphorae whereas Syrah and Grenache are less successful. Stéphane used his first amphorae for the 2012 vintage.  They hold 160 litres and they are quite fragile.  They are fired at 1045ºC, but no higher, as otherwise they lose their porosity.  The firing takes two days and the breakage rate during the firing can be as high as 10%. 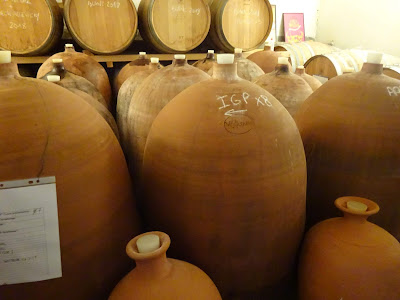 We were treated to a comprehensive tasting.

2018 Puech Auriol Blanc, Coteaux d’Ensérune - 7.50€
An original blend of 80% Chardonnay and 20% Carignan Blanc.  Stéphane is looking for freshness  and drinkability.  Half of the blend is aged in barrels, with acacia bottoms, as he likes the refreshing note that acacia can give. The wine usually does a malo and the nose was nicely rounded with a fresh elegant palate.  The acidity in the Carignan offsets any ripeness in the Chardonnay very nicely.   Well balanced with a fresh finish. 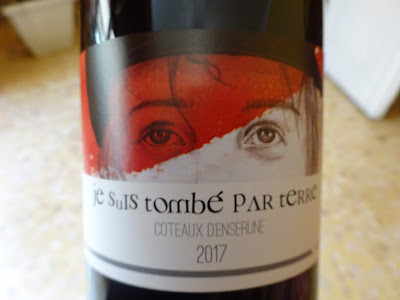 2018 Viognier, Je suis tombé par terre.  - 7.50€
Stephane and Cécile are looking for fruit, with some citrus notes.  They want freshness rather than the very ripe flavours of Viognier from the northern Rhône  I liked the balance; it was lightly peachy with some citrus notes, fresh and elegant, and kept only in vat.  As for the name, that is apparently a reference to a character in Les Misérables.

2019 Rosé, Puech Auriol, Coteaux d'Ensérune  - 7.50€
Made from a large proportion of Aramon with about 20% Cinsault.   They have 1.5 hectares of Aramon; it produces big grapes, like Cinsault.  This was a tank sample, and just filtered.  The juice is saigné, rather than pressed.  A light colour, pink orange, with fresh acidity and crisp fruit.  Very refreshing.

2018 Gros Grains, Puech Auriol - 7.50€
Stephane described this as ‘our Cuvée Glouglou’ - it is meant to be eminently drinkable, and no sulphur is used in its making. Quite a deep colour. Quite a fruity, leathery nose and palate with a fresh finish.  It is a wine for early drinking.  Freshness is the key.  Stéphane  observed that we have all used sulphur without really knowing why - now is the time to question that.  And he gives the wine quite a tight filter.

2017 Carignan - 10€
Their first vintage in 2002 was a pure Carignan.  Since 2012 the wine is vinified partly in amphorae and partly in 500 or 600 litre demi-muids.  It has some lovely fresh red fruit, both on nose and palate, with a sympathique note of rusticity that you can often associate with Carignan.  There is a good balance of fruit, garrigues and juniper, and tannin, with a fresh finish.  The vines are 70 - 80 years old and they are continuing to find more old vines, which they bring back to life with the judicious application of compost.

Stéphane talked about the enemies of Carignan, namely oidium which can be treated with a powder based on sulphur and vers de la grappe for which sexuel confusion is the solution.   Brett can be a problem in the cellar but that is solved by careful cellar hygiene.  A lot is said about old Carignan vines but Stéphane reckons that Carignan performs well once the vines are  10 -15 years old, and mentioned one of his clients who planted some Carignan in 2005 and was obtaining very satisfactory results. 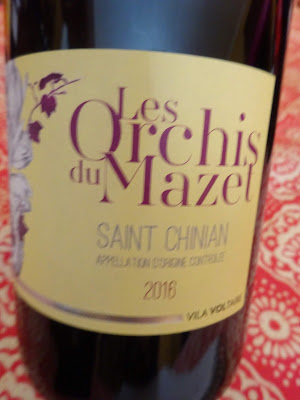 2016, St Chinian, les Orchis du Mazet - 12.00€
From vineyards on the plateau between Puisserguier and Cazedarnes.  A blend of Carignan and Grenache, with a little Syrah, blended gradually during the élevage, which is in amphorae without a trace of oak.  Good colour. Nicely rounded nose, with fruit and notes of the garrigues.  An elegant palate.  Nicely balanced with restrained fruit.  There is the flesh of the Grenache and what Stéphane called the soul or the âme of the Carignan, while the Syrah add a note of violets and red fruit.

Stéphane talked about the financial viability of a estate.  It is all very well to have low yields, but if you then do not have enough wine to sell, it makes no sense.  He averages 30 hl/ha for St Chinian,  50 hls/ ha for Carignan and 70 hls/ha for his white wine.  He does not want organic wine to be something elitist. You must keep your feet on the ground and your head on your shoulders!

2017 Je suis tombé par terre. - 10.00€
A blend of Merlot, Cabernet Sauvignon, Carignan and Grenache, in equal proportions, and aged in demi-muids.  Again, Stéphane blends gradually during the élevage.  Quite a rounded nose and palate, and quite cassis, with the bordelais varieties, with a balance of tannin.   I have to say, I found it less interesting than their other wines, but I am not a fan of bordelais varieties in the Languedoc. 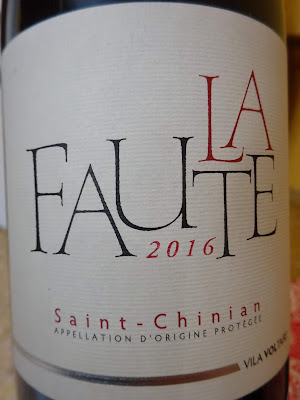 2016 St. Chinian, La Faute - 19.00€
From 45-year-old Syrah vines.  Originally it was Coteaux de Fontcaude, the IGP named after the nearby ruined abbey. Syrah ages badly in the vineyard; the branches break in the wind and it loses buds.  They have to handpick it as it does not like a mechanical harvester. Yields 25 hl/ha.  All aged in old demi-muids, for sixteen months.  Syrah is a reductive grape variety so it needs élevage. They described as their Cuvée Icône.

Deep colour, with spicy Syrah fruit, with freshness and some balancing acidity on the palate.  They liked it so much that they did not want to blend it, with its aromas of spice and garrigues. 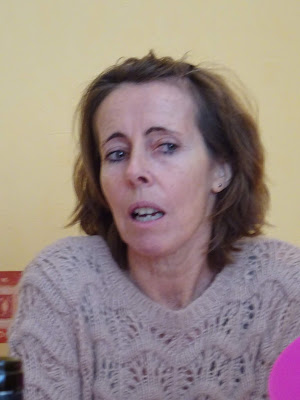 And our tasting finished with Torments 2016, Coteaux d’Ensérune and a wine that is not made every year.  The previous vintage was 2011.  It comes from Grenache vines that are 60 years old, which account for 90% of the blend, balanced with some Carignan.  Aged in demi-muids for two years.  The flavours are rich and concentrated, with the ripe cherry fruit of Grenache, and some rich spice and balancing tannins. It is concentrated, but not heavy.   And it made a grand finale to an interesting range of wines.

Stéphane observed that all though he is often tempted by other styles of wine, with the experience of his consultancy work and visits to wine cellars in other countries, they have now established their range.  And as we left, they gave us a couple of large lemons picked straight off the tree; the perfume was quite seductive. 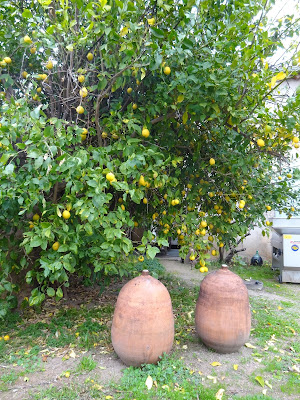 Bob Rossi said…
This looks like just the kind of place I'd love to visit and the kinds of wines I'd like to try. If we ever make it back to that part of France, I'll definitely plan a visit. Thanks for writing this piece.
16 January 2020 at 14:48

Guy p said…
I love reading your posts, particularly when you mention St Chinian. Could you recommend any producers who have some good reds around the €7 per bottle for us to visit? We're going to start importing small amounts of Languedoc wine to Australia and if possible it would give us some to preplan visiting. We know St Chin very well and particularly like the wines from Minervois, Collioure, Pic St Loupthey appear to suit the Aussie palate perfectly.
17 January 2020 at 06:05

Rosemary George MW said…
That's a tall order of a question! Are you talking €7 as a trade price? If so, I would have thought there would be quite a lot of producers who would meet that criterion for their entry level wines, which are often more accessible than their oaked and more expensive wines. Collioure however does tend to be more expensive, with such difficult vineyard conditions. Have a look back through my blog and see what catches your eye. There is plenty of choice. Knowing the difficulty that some friends had to find St Chinian for their wedding in Australia, you will be pioneering. Good luck!
21 January 2020 at 10:09

Guy P said…
Pioneering sounds scary but I truly believe the wines of the Languedoc, if chosen well, really suit the Aussie palate. Good suggestion, your blog would be the perfect place to start some planning. Thanks so much for your response. Ps: if you don't mind I'd like to keep you updated on our progress.
23 January 2020 at 07:52

Rosemary George MW said…
Please do - and if you want any specific advice, do feel free to email me at rosemarygeorgemw@gmail.com