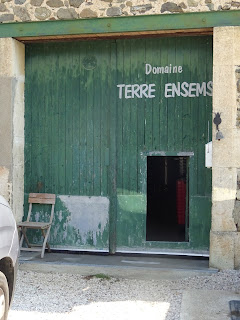 One good thing leads to another.   We had dinner in August at the wonderful pop up restaurant in the crater at Domaine du Météore and by chance found ourselves in conversation with a fellow guest, Michel Bouisseren, who happened to mention that he made wine in Berlou, and so we arranged a cellar visit. 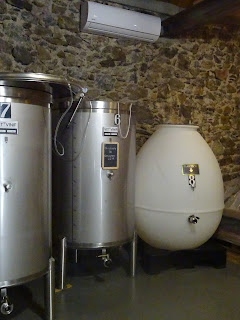 It turned out that Michel had just completed his second harvest.   He explained that he had spent 30 years selling Speedo swimwear and then it was time for a change.  He wanted to monter une domaine and had hoped to buy an existing estate in Gabian, but the owner changed his mind.  Michel didn’t know the village of Berlou but found himself having lunch at Le Faitout, the village restaurant, which is well worth the journey.  He had a coup de foudre for the place; it is a lost corner, on the way to nowhere, and there are vineyards on schist, not to mention vines for sale at an affordable price.  Michel gave us some figures - an average of 12-14,000€ per hectare, and even as low as 7000€ if the vines require a lot of work, with many missing, as opposed to 40,000€ in the Terrasses du Larzac.   He has bought two plots of vines, a total of 12 hectares of land, with 7 hectares in production.   He has all five red varieties of the Languedoc, but Carignan is the most important, with lots of old vines that are 80 and even 105 years old.  He is also planning a hectare of white wine, concentrating on Chenin Blanc, which he loves, with some Bourboulenc, Marsanne, Roussanne and maybe Macabeo.  The vineyards are being converted to organic viticulture and eventually will become biodynamic. 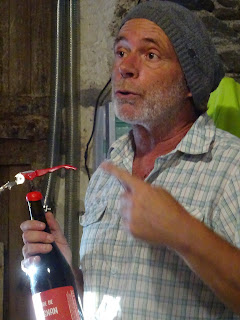 He took possession of his vines in 2018 and worked the vineyards, giving him a chance to get to know them, but sold the grapes sur pied, so that he did not harvest them himself.   He talked about the innocence of inexperience.

He has a small cellar, well situated in the centre of village almost next door to the mairie.  His methods are natural, using indigenous yeast, no fining, no filtering and a minimum of SO2. The cellar is neat and compact, well equipped with a small modern basket press - you can regulate the pressure so that it is very slow - Cinsault is very juicy and quick to press; Syrah in contrast takes longer as the skins are thicker.  There are small stainless-steel vats, with temperature control, an egg, a demi-muid and a couple of amphorae.   The egg, made from some form of plastic, has the micro-porosity of a barrel of two fills. Michel uses for it for fermentations, and finds it gives more volume than a fermentation in a stainless-steel vat.  His amphorae are sandstone, and made in Bordeaux; which he prefers to amphorae from terracotta, which is much more porous. He is not very keen on oak; he had put some Carignan in the demi-muid, but found it too oaky.  In an amphora there is a continual movement of the lees.  He finds that amphorae give freshness and what he called droiture to the wines.  Two more are on order - a 5hls amphora costs 2300€, but they are very easy to clean.    He works by gravity and talked about filling the vats a bucket at a time, going up and down a ladder, but he plans to be better organised next year.  This year the harvest began on 26th August with Syrah and finished on 9th September with Carignan.   He bottles with the waning moon, when the wine is less disturbed. 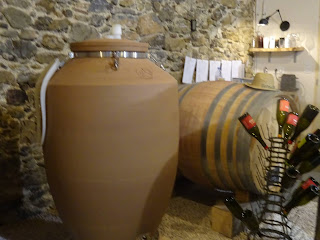 I asked about the name of the estate.  Ensems means ensemble, or together, in Occitan and it is a joint project, between Michel and his compagne, even though she works full time as a chartered accountant.  Michel explained that he is doing this for his quality of life; a change of career at the age of 57.

In 2019 Michel made four wines, all Vin de France.  He does not want to bother with the appellation, which would be St. Chinian - Berlou.  “There are too many constraints, with the number of grape varieties and minimum and maximum percentages.  And the IGPs are almost as bad”. 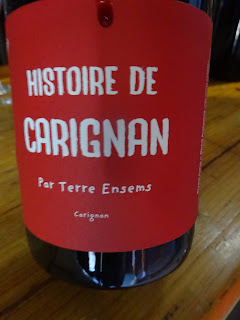 Vinified by carbonic maceration, taking the CO2 from a fermenting vat to put it in an empty vat, and then adding whole bunches for a maceration that lasts about three weeks.   Good colour. Fresh red fruit on nose and palate. A certain density on the palate, but not heavy   A fresh finish with some acidity and tannin.   I will be intrigued to see how this develops in the bottle. 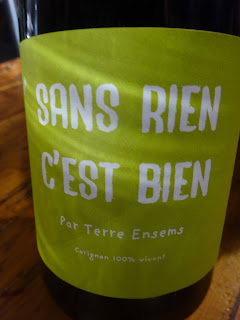 Destemmed Carignan, vinified in an egg.   Slightly lighter colour.  A different plot of vines.  More restrained fruit and less dense on the palate.   Fresh and youthful.  After the egg, the wine goes into vat and is then bottled in April. 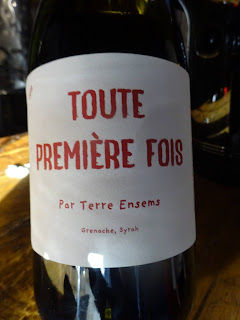 70% Grenache with some Syrah, fermented and aged in vat, and bottled at the beginning of April.  Medium colour.  Quite a firm nose, with a nicely rounded palate, with the sucrosité or richness of the Syrah and the cherry fruit of Grenache.  Supple tannins, a rounded finish, and still very young.

A blend of 90% Mourvèdre with 10% Syrah.  Each plot and grape variety is vinified separately, and blended in February, and then bottled in June.  The Mourvèdre will have spent six months in an amphora.  Quite firm fresh fruit, with a nicely rounded palate, ripe fruit, spice and elegant tannins.  A potentially lovely glass of wine, but still very young.

As for 2020, Michel may try a different cuvée or two.  He does not want things to become repetitive, and is clearly enjoying himself.  Asked about future projects, he talked about getting a prestateur de cheval, renting a man with a horse, to come and work the vineyards of old Carignan, for which a tractor is well-nigh impossible.  He has also six sheep in the vineyards during the winter to keep the grass and weeds at bay.  He does not want any more vines. Six hectares is small enough for him to do it all himself and to really know what is happening in his vineyards. You must keep your connection with your vines; he knows all his vines; you simply have to spend time in the vineyards.

As a past salesman, Michel pertinently observed that the Languedoc still has a complex about its wines, and about selling them.  Wines can be priced too low.  It is something that the Languedoc has to overcome.  Indeed, many is the times that I have lamented a delicious wine made by somebody who clearly has no idea how to sell it.   Michel clearly does.

ishikavarma said…
This comment has been removed by a blog administrator.
19 October 2020 at 16:51