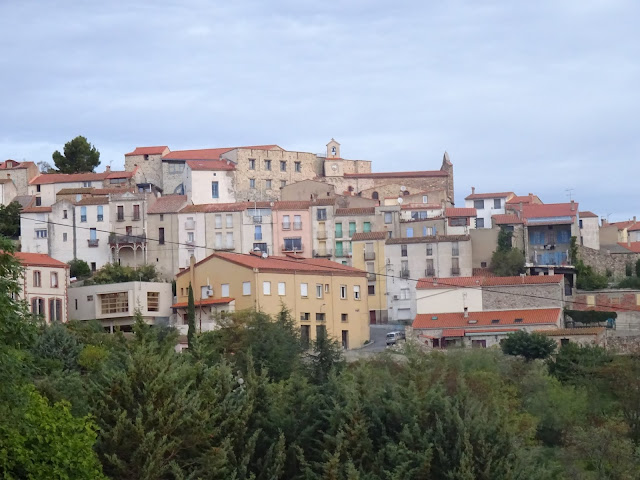 Here is the next instalment, another range of lovely wines showing the diversity and originality of Roussillon.

A blend of Grenache Gris and Grenache Blanc, fermented and then aged for four months in new oak.  The name is a play on words: Autant En emporte le Vent is the French for Gone with the wind… The wine was light golden with a rounded palate, with good weight and texture and a balancing note of acidity.

This comes from an estate outside Perpignan and close to the sea.  Serge Baux bought the property in 1997, from a 92-year-old spinster, Mlle Durand. The lieu-dit is in fact Mas Durand rather than Mas Baux.  The Durand family had been there since the 1700s.  They had been important wine merchants and had supplied Napoleon’s troops.   And the estate had also produced silk worms and by the 1997 was in serious need of renovation.   Serge has created a modern cellar in an old barn and now farms 12.5 hectares organically.

A blend of Grenache Noir and Grenache Gris aged on the fine lees.  A very pale colour and a delicate nose and palate.  Lightly rounded fruit with a dry finish.  Easy drinking, but more serious than what the French call swimming pool wine.

Château de Corneilla is the family home of the Jonquères d’Oriola family; they have been in the village of Corneilla del Vercol since 1337 and been making wine since 1485.  William is the 27thgeneration and his father Philippe was one of the first to make vin sec, dry table wine in Roussillon in the 1980s, as opposed to Vin Doux Natural.  William spent three years as a flying wine-maker, in Tasmania, the Margaret River and Marlborough, and he is particularly enthusiastic about rosé, making two other wines, heritage and Cavalcade.  The property now totals 95 hectares.

A pure Carignan, from a vineyard planted by Francois Jaubert’s grandfather in 1969. Just half a hectare of old gobelet, bush vines.   François uses natural yeast and the wine spends four weeks on the skins, and is then gently pressed.  The wine is kept in vat for three months.  François does not like oak. The wine has fresh red fruit on both nose and palate, with some slightly rustic flavours, but nicely so.  I found it very appealing.

A blend of Grenache Noir, Syrah and Mourvèdre, aged for 12 months in French oak.  Thomas Mangin, who has taken over his grandfather’s vines, explained that he wanted to show the ageability of the wines of Roussillon, and so a five-year-old wine.   It had dense, ripe fruit on the nose and on the palate was quite rich and rounded, with a firm tannin streak and still quite obvious oak.  It tasted quite young, with plenty of ageing potential.

Thomas explained that he is going to set up a cellar with a friend in the village of Vingrau, who is taking his wines out of the coop.  The friend is really interested in viticulture while Thomas has more commercial expertise, so they should be a good team.  He currently has 20 hectares in production in four large plots around the village of Vingrau, with three levels of wine, of which Heritage is the top.

The wine was quite rounded with honeyed fruit, but I must admit that I much prefer Oliver Saperas’s other Vins Doux Naturels.   White Banyuls does not thrill,  whereas his Banyuls grand cru in the previous Masterclass was delicious.

A blend of one third each of Macabeo, Grenache blanc and Grenache Gris, kept in a cement vat, which helps retain the freshness.   And it is delicious with dry honey and walnuts and a bite of acidity.  Intense and fresh with a dry finish.

This is one of the old estates of Roussillon.  Fernand Vaquer was making remarkable wine in the 1980s and labelling it simply Vin de Table, not even Vin de France.  It is now his daughter-in-law, Frédérique Vaquer who makes the wine, with great talent.

Pure Grenache, muted on the skins, and from a solera that was begun in 1920, forgotten about in 1962 and rediscovered in 2002.  I am not sure how Elise Gaillard can be so accurate about the dates, but the wine is delicious, rich and nutty, with nuances galore.  Everything that mature vin doux naturel should be.

The first thing to say is Rancio Sec is not a Vin Doux Naturel.  If the term rancio is used to describe mature Vin Doux Naturel, then the wine is a fortified wine, but in this instance, the term describes wine that has been left to mature in barrels that are never topped up so that the wine often develops a flor.  It is usually white, in this instance from 40% Macabeo and 30% each of Grenache Blanc and Grenache Gris.  The flavour was firm and nutty, and really quite severe after the richer Vin Doux Naturel with razor sharp acidity.  It is very much part of the tradition of Roussillon which nearly disappeared as it was not incorporated into the appellations when they were created.  Happily, the Slow Food Movement woke people up to the quality of Rancio Sec and a handful of wine growers began making it again.

And if you want to hear more about Roussillon, you will find me on a podcast in conversation with Sarah Kemp, formerly on Decanter Magazine and now running her own podcast