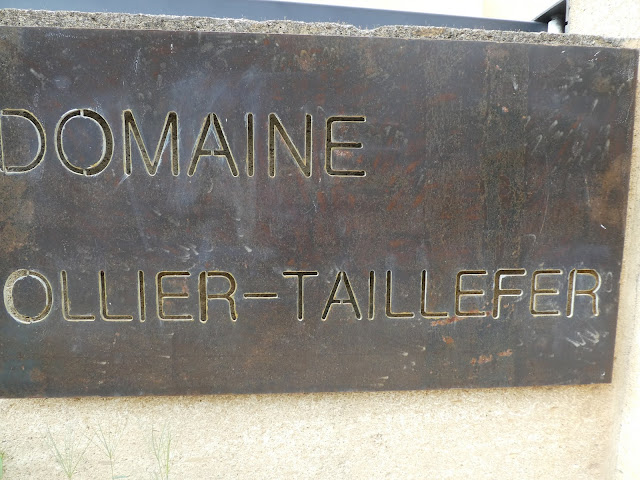 Wine-loving friends to stay provided an excuse to go and check out the current vintages at Domaine Ollier Taillefer in Fos.   Francis Ollier gave us her usual friendly welcome  - she is quite simply one of the most irrepressible vigneronnes that I know.   I have ever seen her lack for enthusiasm, nor for words.

In mid-September she was happy about the harvest.   They had started picking the whites and rosés and the grapes were all very healthy.   It has been a good summer, with some regular rain, a storm in June gave 50mm. of rain, followed by 30 mm. in July, with another 25 mm. in August.  In contrast some areas are complaining about drought.   The reds were not quite ripe yet and would be picked a week later. 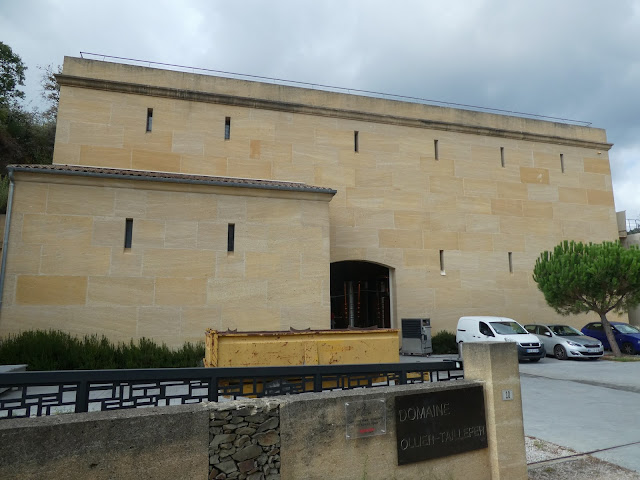 These days since the building of their smart new cellar, you taste in the old vinification cellar with its concrete vats and a toy Bugatti!   Sorry, I forgot to take a photograph of it.  And some of the labels have been re-looké, as the French so eloquently say! 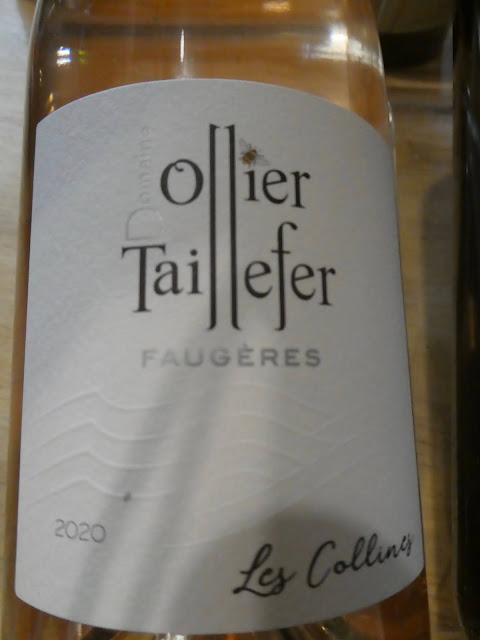 Pressurage direct.   They are increasing the percentage of Cinsault and planting more, to lighten the rosé, so a minimum of 40% Cinsault, with some Grenache and some young Syrah and Mourvèdre, as well as old Oeillade.  Ripe and rounded with some weight.  So quite a vinous style of rosé. 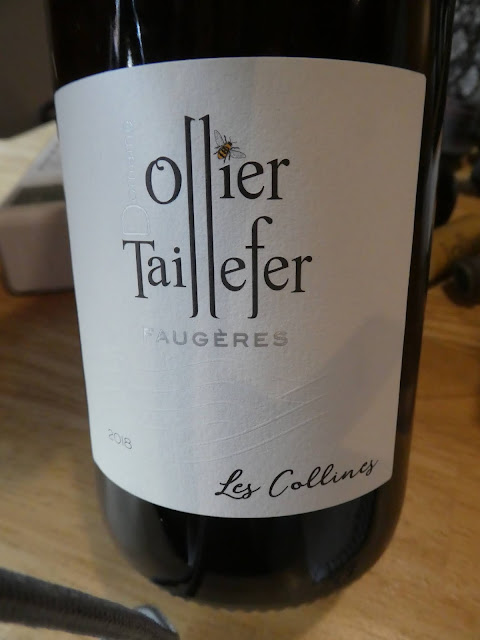 Grenache is the main variety, at 40% with at least 20% each of Carignan and Syrah, and a little Mourvèdre.  it all depends on the vintage.    The wine exudes the ripe fruit of the Grenache, with spice and a streak of tannin.  Some black cherries and a nicely rounded finish.  With vineyards at 300 - 400 metres, they retain some freshness in their wines, and this year they have had cooler nights during the second half of August, which is also beneficial.   The grapes are ripe at 13º.

Françoise talked about  organic viticulture.  She reckons that about 60% of the vineyards of Faugères is now farmed organically, with another 25% following Terra Vitis or Haute Valeur Environnementale, with its emphasis on biodiversity.  The remaining 15% usually comprises members of the cooperative, as there is less incentive for them to convert as the cooperative does not pay any bonuses for organic grapes.  However she reckons that in 10 years time everyone will be organic. 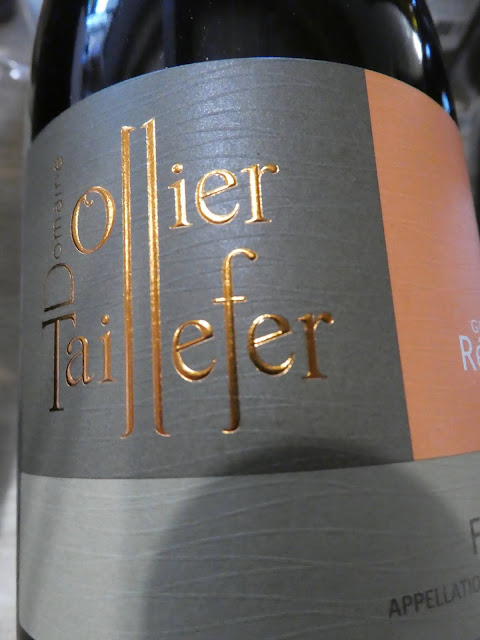 This was a cooler vintage than usual, with a good supply of water.  In contrast  2018 was much hotter, and 2015 was the year of mildew.   2021 will be 20% lower in quantity, thanks to frost damage on the plain of Roquessels, the adjoining village to Fos.

30% Carignan, Vieilles Vignes, 60 - 110 years old and 30% old Grenache, with 30% Syrah, and just 10% Mourvèdre from vines that are 45 years old.  The wine spends 25 days on the skins in vat.   No oak.  Lovely rounded nose and palate, with freshness and spice and a streak of tannin.  Quite structured, with satisfying weight and mouthfeel.   A peppery note from the Syrah.  The old Carignan gives the notes of garrigues and a fresh finish.  If I had to chose one wine to represent Faugères, this would probably be it. 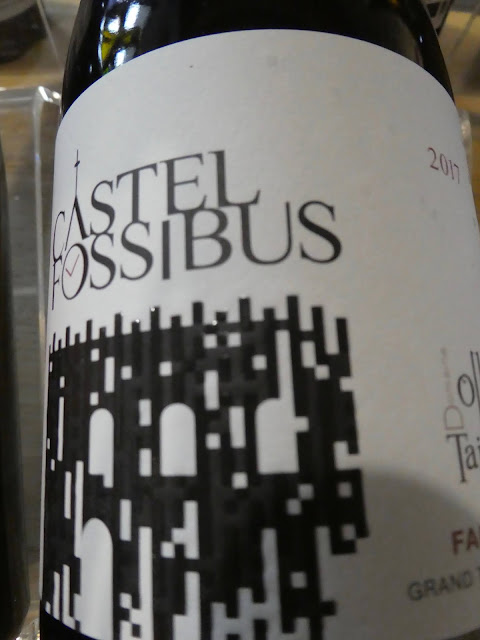 Twelve months in wood, 10% new, after a 25 day maceration on the skins.   50% Syrah with Grenache and Mourvèdre and just 5% of old Carignan to add a note of freshness.  Good colour.  Elegant nose and well-integrated oak, on both nose and palate.  Nicely rounded with some firm fruit and a fresh finish.

Medium colour.  A warmer, more leathery nose and quite a rounded palate, with ripe fruit, but a slight dry note on the finish.  As Françoise observed, you can taste the heat in the tannins.  But some perfumed fruit none the less, but I preferred the 2017.

Half and half Mourvèdre and Syrah.  The Mourvèdre goes into a new barrel and the Syrah into a barrel of one wine.  A heady 15º.  25 day cuvaison.  Altogether much denser and more solid with black fruit on the nose and palate.  Ripe with some hints of vanilla and the new oak gave the wine a more international style.  It needs time.   Previous vintages of this cuvée were 2013 and 2015.   They did not have enough wine in 2016; in 2014 there was too much rain and 2018 mildew. 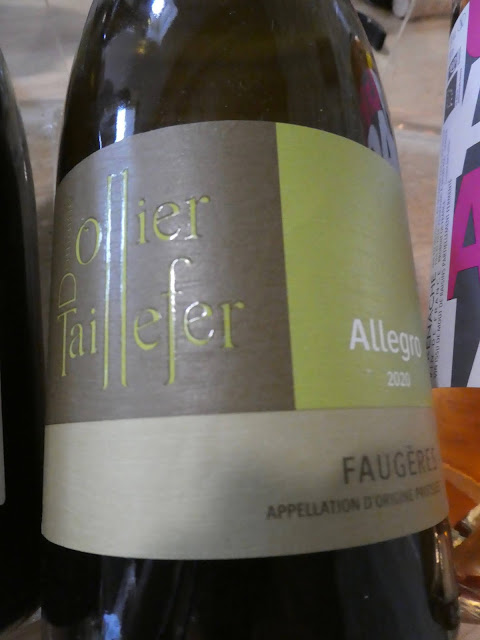 And then we finished with one of our favourite white wines.

A blend of Roussanne and Vermentino with a touch, just  2-3% of old vine Carignan Blanc.  Very mineral, very stony, pithy fresh fruit with good acidity.  A salty note on the finish.  Ageing potential.   The 2017 is drinking beautifully this summer.  A grand finale.   Thank you Françoise.