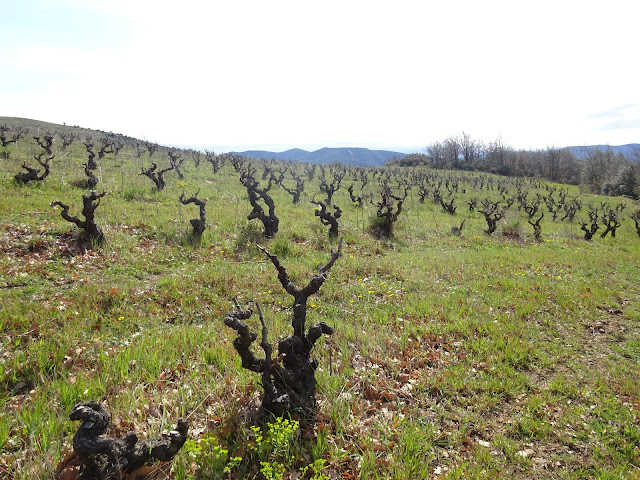 Some bottles from Domaine Lafage in Roussillon came my way recently.     This is one of the largest producers of the region, and one of the most successful, producing wine from five distinct vineyard areas within the region.  The largest is near the sea, close to their cellars at Mas Miraflors outside Canet-en-Roussillon, and then there is Domaine St Roch in Maury, as well as 20 hectares in les Aspres and recent purchases of 17 hectares in St Paul de Fenouillet and another plot in Rivesaltes, making a total of 260 hectares.   However, their beginnings however were small.  In 1995 Jean-Marc made, with his wife Eliane, who is also a qualified oenologist, just 1000 bottles of Muscat de Rivesaltes.  In 2001, after a varied career as a flying winemaker, he took over the family vineyards in Maury and then in 2006 bought Mas Miraflors.   These days they produce an extensive range of wines that cover the varied flavours of Roussillon.  Nor are they afraid to innovate.

Roussillon is not known for its sparkling wine so La Triple Rosé was a discovery - £17.50.

It is described as Vin Mousseux Gazeifié and is a blend of Grenache Gris, Syrah and Vermentino.   There is the merest hint of pink and the nose is rounded and fruity, with red fruit on the palate, which is nicely rounded with light bubbles.  There is some balancing fresh acidity, with a  dry finish, making it a deliciously refreshing drink, not to mention an original offering from Roussillon.     Otherwise, the nearest vineyards for sparkling wine are away over the hills, in Limoux, with a completely different Atlantic climate.

As it happened, shortly after enjoying this wine, I found myself listening to my friend and colleague, Tim Atkin MW interviewing Jean-Marc on his Instagram feed.  Jean-Marc explained that he had used beer yeast to ferment the grapes and that he had added each grape variety to the vat, one at a time.  The wine was then chilled to stop the fermentation and some more CO2 was added.   Just 5% of the blend was kept in oak, to add a little more weight to the palate.

As the name implies, this comes from 100-year-old vines, Grenache Blanc and Grenache Gris, and also some Roussanne, which is a recent introduction to Roussillon.   There are three harvests.  Grapes from the vineyards at a higher altitude are picked at 12°, then for riper fruit, there is a picking at 13.5°, and finally just five percent of the blend is a late harvest with a potential alcohol of 22°.   And the three components are blended, with 30% of the wine kept in old barrels and 70% in concrete tanks.    And the result is very successful.

A little colour.  A satisfyingly rounded nose, with some grassy, herbal hints.  Good weight on the palate, with well integrated oak.  Good depth of flavour and fruit, with balancing acidity, and some ageing potential.    A wine that amply illustrates the often overlooked success of Roussillon whites.

This is mainly Chardonnay, which is fermented on the lees of some Viognier. And the flavours belie its warm origins.   A lightly herbal note on both nose and palate. I did not find any of the peachiness I would normally associate with Viognier.  Nicely rounded palate, with good acidity and a satisfying balance.

A blend of 50% Carignan, 40% Syrah and just 10% Grenache.  Medium young colour.   Quite fresh spicy red fruit on the nose, and a rounded palate with some cherry flavours. Ripe fruit, soft spice and medium weight.  Very drinkable.

A blend of 70% Grenache Noir balanced with 30% Syrah.  Medium colour.  Some rounded spice on the nose, and on the palate quite a pronounced oaky, vanilla streak. Quite a full-bodied wine with some ageing potential.

Jean-Marc talked to Tim about the differences between Roussillon and the Languedoc.  The big difference is size.  The Languedoc produces 14 million hectolitres a year from 300,000 hectares and Roussillon 500,000 hectolitres from no more than 20,000 hectares.  Yields in Roussillon are much smaller and irrigation is quite impossible.   Jean-Marc may have a large landholding, but it is divided into numerous tiny plots, partly as the terrain is so hilly.  When Tim asked him how many plots, he simply replied ‘hundreds’, observing that the average size of a plot is about 70 ares.   And he cultivates about 15 different grape varieties.

I also heard Jean-Marc at the on-line Old Vine Conference last autumn.   He talked about the fact that Roussillon has kept its old vines and has not replanted as much as they have in the Languedoc.  This is in part due to the lack of commercial success of vin doux, so that there was little incentive to replant so that there are vineyards that are now 80 or 90 years old, wonderful gnarled old vines, which are much more suited to the hazards of climate change than vines trained on wires.  The geography of the Roussillon has saved the old vines; mechanisation was impossible on such difficult terrain.

When asked for advice to producers wanting to maximise their old vines, Jean-Marc’s reply was quite simply: take care of them.  Originally in Roussillon they wanted high sugar levels from their grapes for vin doux, but now they understand the plant much better.  The leaves of the bush vines provide shade and create a microclimate within the vine.  It is a question of canopy management, considering the ratio between fruit and leaves. The quality of the soil impacts on the plant and on the quality of the grapes.   There are many things to consider, no-till farming, disease resistant crossings, vines that produce grapes with more acidity, such as Trepat, a Catalan variety, and Touriga.  For new plantings, an east west orientation is distinctly preferable to north south, to maximise shade rather than sunshine.  However bush wines are more expensive, with their smaller crop.  You must be able to reflect the price of the bottle of wine, and the economics of wine production in Roussillon are not fantastic.  His observations provided plenty of food for thought. 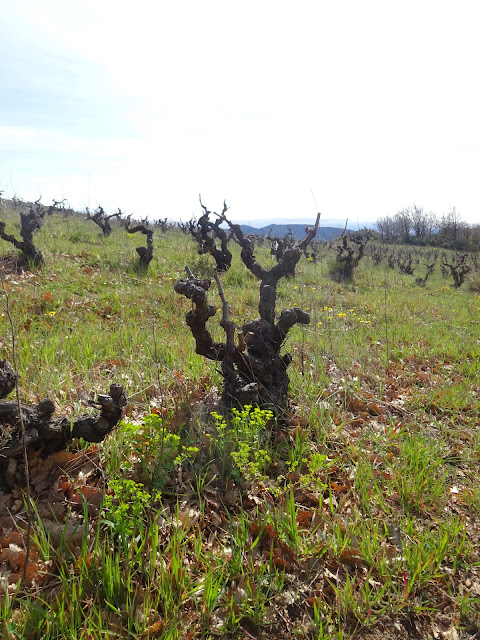