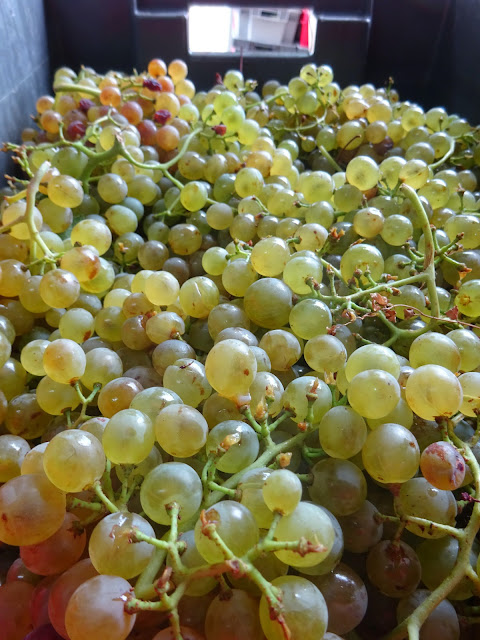 A friendly encounter with  Olive Coste who is the 9th generation at Domaine Montrose, but his father was the first to actually live there and make a living from the vineyards.  Earlier generations were bankers in Montpellier.  Olivier studied commerce, specialising in wine, and spent two years working for Georges Duboeuf in the US as a brand ambassador for the Beaujolais crus.  And then it was time to come home to Tourbes..

It was early August, and the harvest had already started, with Chardonnay on 4th August.  When his father first began working at Montrose some 40 years ago, the beginning of September was the usual time for the start of the harvest.   They irrigate some of the vineyards, on flatter land and that helps the grapes to ripen properly, whereas in other vineyards the ripening process has virtually stopped as the vines have closed down.

Like most Côtes de Thongue estates of any size - Montrose totals 100 hectares, with 80 hectares around the cellar and the rest within a three kilometre radius - Olivier has an eclectic selection of different  grape varieties Chardonnay, Vermentino, Viognier, Grenache Blanc, Muscat à petits grains, Sauvignon Blanc, Roussanne and for red varieties, Pinot Noir, Cinsault, Grenache Noir, Cabernet Sauvignon, Carignan, Syrah, Grenache Gris and Marselan, and also a couple of white resistant varieties. Souvignier Gris and Sorelli, which are yet officially allowed in the Côtes de Thongue, but they are in the pipeline.   Over the last ten years they have planted more traditional varieties, such as Grenache Noir and Cinsault and given up on varieties such as Chardonnay, Viognier and Pinot Noir, which are increasingly less suited to the region.  Even Syrah is becoming questionable.  Olivier talked about Chardonnay.  It is a brand, so the question is what to replace it with.  He is looking at later ripening varieties such as Grenache Blanc and Rolle or Vermentino, which are more suited to the south.   They need to educate the consumer to consider something more traditional.  Planting a vineyard entails a long cycle.  His father Bernard took over 40 years ago, when the vineyards were planted with Carignan, Cinsault, Aramon and Alicante Bouschet and so on, and they were encouraged to plant the so-called cépages améliorateurs and the more international varieties, in the hope of improving  the image of the Languedoc.

The soil is quite varied with three main types, argilo-calcaire; villafranchien with lots of little pebbles, or small galets, and then volcanic basalt.   Montrose was an old volcano, and they have the same variety in different soils, which makes for some interesting blending, and enhances the personality of the wines.

And now they are looking at the traditional varieties, that are suited to the region, and adapted to global warming, such as Carignan. The Languedoc is working on its identity, but with the advantage of liberty; there is great flexibility in the choice of  grape varieties.   Grape varieties that are resistant to drought are essential, and they are also considering yeast that produce less alcohol.  Olivier is quite pragmatic about his work in the vineyard, following lutte raisonnée and he does use some chemicals if that means he has to treat less times.  He follows Biodiv&Eau and has planted over 3000 trees, fruit trees such as almonds, cherries and quinces, and is also planting hedges.

We had a quick look at the very traditional cellar and this was a chance to taste some juice, some Chardonnay that had been pressed the previous day, which seemed to my inexperienced tastebuds to have some nice fruit and balance.  They pick the Chardonnay at different stages, less riper and riper.  We also tried some Pinot Noir that is destined for blending in a rosé, with Grenache and a little Cinsault   It adds some complexity and vinosity.  Grenache is best for rosé, giving some structure  and blends well with Cinsault.   Rolle, or Vermentino,  and Grenache Gris are also good as you can macerate them to add some weight and substance, but without adding any colour.   They pick at night.

All the wines I tasted on this occasion were Côtes de Thongue, although they do make some other wines.  They also own an estate in Faugères, Château des Adouzes and make a range of varietal wines, from traditional varieties, such as Carignan Blanc and Carignan Noir, which are labelled Les Stars.

A little colour.  Quite firm and fresh on the nose.  Slightly bitter  the palate.  Fresh acidity.  Tight knit.

They were frosted in 2021 and lost 30% of the white crop.   The frost affected the earlier varieties. such as Chardonnay.

Same vinification of Chardonnay.  No wood - we are not making Condrieu! Olivier quipped. A little colour.  Delicately peachy on nose and palate.  Good fruit and a slightly bitter finish.  It usually evolves nicely in bottle and will develop some rondeur.  But they will gradually produce less to concentrate on Rolle and Grenache Blanc.

And then on to rosé for which Domaine Montrose has established an excellent reputation.

They call this their Classic cuvée and produce 500.000 bottles,  from Grenache and a little Cabernet Sauvignon and Syrah, even less Cinsault and just a touch of Pinot Noir.   The blend evolves with the seasons, determined as to which vats are showing at their best.  Pale orange colour. Quite rounded. lightly vinous and nicely elegant.    80% of their production is rosé, with Olivier observing  that the French drink more rosé than white wine.

I quizzed  Olivier about the tipicity of the Côtes de Thongue. He does not think that there is one style of the Cotes de Thongue;  it is determined by a group of like-minded producers who want to differentiate themselves from the Pays d’Oc.

A lot of Grenache and about 15% Rolle, fermented together, including one third in barriques, where the wine stays until March.   A sélection parcellaire.  Pretty pale pink.  Nicely rounded nose.  Much more serious than the Classic Cuvée. Good concentration combined with elegance.  Fresh tension, a more gastronomic rosé.  Oak well integrated; just adding some weight.   13º  Annual production 80,000 bottles

1701 was the year their ancestor received his coat of arms.  85% Grenache with 15% Roussanne from two plots, the same two each year, on volcanic soil, namely Grenache de la Croix and a north-facing vineyard of Roussanne in the garrigues about half a kilometre away. 15% is fermented and aged in new wood for six months. 10.000 bottles.  The aim is the best rosé possible. and very good it was too.

The Roussanne gives some spice and a streak of tannin, while the Grenache provides rondeur.    Rounded and textured on the palate, with layers of flavour and nuances.  Olivier wants drinkability and freshness.  A very stylish rosé with depth and length.

The Cuvée Prestige was developed about ten years ago and 1701 five years ago, in an attempt to ‘premiumise' the rosé market,  as Olivier put it.  And then we wondered about the ageing potential of rosé so he opened the 2019 1701, which was evolving nicely with some intriguing layers of flavour and good acidity.   The 2020 was lightly old gold in colour with a nicely rounded nose and palate.  It was quite dry and firm, but  with good length.    I have had some mature Bandol rosé in the past, and see no reason why a rosé should not age if it is a serious wine in the first place.

Olivier commented that wine-making technique was more  important for rosé than  for red or white wines, and the terroir effect is less.  Things like speed of picking and protection against oxidation are paramount, as is the quality of your press, and when you run the juice off the skins.  He mentioned the Rosé de Terroirs association which includes appellations such as Bandol and Faugères.

And what about the future of the Côtes de Thongue,  Olivier considers it to be functioning well, with a good communal spirit, which allows everyone to do their own thing, but with a good collective spirit.  Thirty years ago they might have considered an appellation, but decided to opt for the freedom of grape varieties and blends.

And then we went on to red wines:

A blend of 60% Syrah to 40% Cabernet Sauvignon.  Kept in stainless steel and concrete vats and blended after fermentation for bottling in the spring.  Medium colour.  Quite a short cuvaison of seven days.  Good fruit with a streak of tannin; some cassis and black fruit and supple tannins.

A blend of  60% Cabernet with 40% Sarah, in barrel for 12 months after a long maceration of 20 days.   Quite a firm structured nose.  Firm fruit.  Dry cassis.  Youthful and fresh, but very much more serious and structured.  A good finale to our tasting.

And then I spotted rosé in a can.    Olivier thrust a couple into my hand and they proved remarkably refreshing on the TGV a couple of days later.