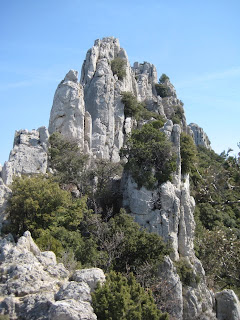 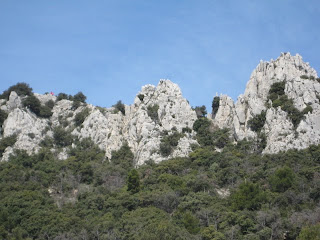 A trip to see friends, who live near the dramatic Dentelles de Montmirail, provided an excuse to stop off in Gard and visit Château Mourgues du Gres. There is no doubt that this is one of the leading producers of Costières de Nîmes, the appellation that makes the transition between the Languedoc and the Rhône, with vineyards to the south east of the city of Nimes. The estate is run by François and Anne Collard; Francois’ father arrived from Morocco in the 1970s, and bought land and planted vines and also olive and fruit trees. François began concentrating on the wine in the 1990s, making his first vintage in 1993. He had studied at Montpellier, oenology and agriculture, and then worked as a journalist before coming back to the family estate.

As well as Château Mourgues du Gres, since 2001 they have produced wine on the adjoining property of La Tour de Bérard, with a total of 65 hectares of vines. The 15 hectares of La Tour de Bérard are kept separately. The name comes from an old beacon, a tower with an open roof, so that a warning fire could be lit at the top of the tower. Both Anne and François were away the day we called, but their export manager, Sophie Laurent, gave us a very comprehensive tasting. With one exception, the wines are all appellation Costières de Nîmes. 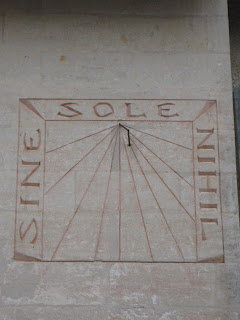 Whites : 2009 Galet Dorés – 6.20€
A blend of Grenache Blanc, Vermentino, Roussanne and a little Bourboulenc. This is light and fresh with a touch of minerality, nicely balanced with a fresh edge of acidity. 2009 is similar in quality to 2007, though a little cooler than 2007, while 2008 is considered a particularly good, year, and was significantly cooler, making for fresher wines.

2008 Terre d’Argence, Vin de Pays du Gard – 9.90€
This includes 40% Viognier, while the maximum for the appellation is 20%, which is blended with Roussanne and Grenache Blanc. There is a touch of oak on the nose, as a small percentage of the Viognier has been fermented in oak, but it is elegantly integrated, with freshness and elegance, and some rounded peachy fruit. The oak serves to fill out the palate, rather than change the flavour.

Rosés : 2009 Fleur d’Eglantine – after the wild roses. – 5.20€
A blend of Mourvèdre, Carignan, Grenache Noir which are pressed, and a little Syrah, which is saigné. A light colour, with delicate raspberry fruit on the nose and palate. The aim is a light delicate wine; it was may be a touch amylic, but a little time in bottle should sort that out.

2008 Galets Rosés – 6.20€
A blend of Syrah and Grenache which are saigné. Ripe and rounded raspberry fruit with some fresh acidity. A little more weight and body than the Fleur d’Eglantine, but still light and elegant.

2008 Capitelles des Mourgues – 7.50€
From Mourvèdre that is pressed and fermented in oak, and Syrah and Grenache that are saigné and fermented in vat. This has a little more colour, with a touch of oak on both nose and palate. There is good acidity, with some body and structure and some rounded fruit, and a hint of oak on the finish. Rosé vinified in wood is relatively unusual, but it makes for a intriguing flavours, that will go well with more substantial summer dishes, even barbecued lamb.

Reds: 2008 Galets Rouge – 6.20
This is their entry level red wine, a blend of Syrah and Grenache, with some Mourvèdre and Carignan, elevé in vat; blended in January and bottle in June. There is soft spice on the palate with some fresh tannin and a touch of orange. Syrah is the dominant grape variety and it finishes with hints of the garrigue and a touch of liquorice.

2007 Terre d’Argence - 9.90€
From Syrah, and Grenache vines that are 55 years old. Mainly an élèvage in vat, apart from some oak for small part of the Syrah. Good colour; with ripe rounded fruit and some spice and more body and weight and a warm spicy finish. Very satisfying.

2007 Terre du Feu - 9.90€
Mainly Grenache with a drop of Syrah, and only made in the warmest years. 2003, the year of the heat wave, was the first vintage. Fermented and aged in vat. Medium colour, with fresh raspberry fruit on the nose, and warm Grenache fruit, raspberries and cherries, on the palate, with a warm, rounded finish.

2007 Capitelles des Mourgues – 13.00€
The opposite of Terre de Feu, with 90% Syrah to 10% Grenache, and aged in oak for nine to twelve months. This is solidly oaky on nose and palate, a bit too much for my taste. There is fruit underneath, and a firm tannic oaky backbone and a rich oaky finish. It should age well and develop in bottle, but for current drinking I would go for Terre du Feu, or indeed my favourite of the four, the Terre d’Argence.

La Tour de Bérard is a simpler proposition, a red white and rosé . All at 4.50€

2008 Blanc – A blend of Grenache, Roussanne and Marsanne. Light in colour, with rounded fruit, and some notes of agrumes, which sounds better in French, than the English citrus fruit. Also a hint of lychees. Deliciously easy drinking

2009 Rosé – A blend of Syrah, Grenache and Carignan, which are pressed. Ripe rounded and creamy on the nose and palate, with some raspberry fruit and balancing acidity.

And then Sophie took us to see the vineyards in the drizzle. They have the same galets of Châteauneuf-du- Pape, with red soil, and on a slightly elevated plateau, or costières, about 50 metres above sea level. 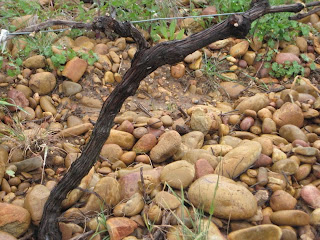 Bob Rossi said…
One of my favorite producers. Fortunately, some of their wines are available on the East Coast (US), although not enough.
6 years ago, a group of us stayed not far from this area. My wife and I were in charge of buying wines each day. So one day we stopped at Morgues du Gres, and returned back to the house with a bunch of wines. Needless to say, they were popular. And we held back a couple of bottles, and when we eventually left France, we brought one of the MDG wines home. So after lugging the wine all over the south of France and then back to the US, there it was in the current newsletter of one of my favorite Massachusetts wine shops. I think we wound up buying more of that wine than any other wine we've ever bought.
Keep up the good work Rosemary. Believe it or not, I still refer to your old book on the country wines of France. We've visited some of the areas you wrote about, and some of what you wrote is still relevant to me after all these years.
14 May 2010 at 01:14

Rosemary George MW said…
Many thanks for your encouragement and for sharing your enthusiasm. I do hope you'#ve also moved on to my book The Wines of the South of France - as French Country Wines is now 20 years old, but you are right - I think some of it is still relevant.
20 May 2010 at 19:02