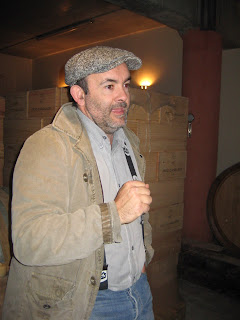 First of all apologies for having neglected my blog for the best part of a month. What can I say? I was confronting a new decade and seemed to spend a large part of the month in a state of distraction and celebration. But now life has returned to normal and we are back in the Languedoc, enjoying the summer sunshine, and cooling wine cellars.

Roc d’Anglade in the village of Langlade between Nimes and Montpellier came onto my radar a while ago, but it was only recently that I got the chance to visit the estate. Rémy Pedreno is an intriguing guy; unusually for someone who is now so enthusiastic about wine, he did not touch a drop for the first 22 years of his life, even though his parents were regular consumers. His first job was in IT, with a project for the Maison des Vins in Tavel and it was a bottle of Vacqueyras les Amouriers that sparked off his enthusiasm, his first grande emotion, as he put it.

He made his very first wine in 1996 from some bunches of Carignan, just enough for one barrel. The following year he rented 30 ares of Syrah and produced four barrels, in his parents’ garage. And in 1999 he went into partnership with René Rostaing from Côte Rôtie who was looking for vines with which to improve his vin de table, which he makes in addition to his appellation wines. The solution was four hectares in the village of Langlade, and the two worked together, with Rostaing giving Pedreno carte blanche for four vintages. Meanwhile Pedreno started buying vineyards, and in 2002 made his first wine from his own vines. He now has ten hectares, six in the village of Langlade and four nearby, in ten plots, broken down into 40 per cent Syrah, and 20 per cent each of Carignan, Grenache and Mourvèdre. In 2001 he constructed a simple cellar adjoining his house outside the village.

Technically Langlade is now part of the Languedoc terroir of Sommières, but nobody bothers to put it on the label. However it has a long history of wine production and a reputation for quality. In 1868 there were 625 inhabitants and 600 hectares of vineyards; it became a VDQS in 1945, but that did not transfer into a cru of the Coteaux du Languedoc in 1985. However, along with Roc d’Anglade there is a handful of serious wine producers around the village.

Remy Pedreno is a combination of modesty and confidence, and displays commitment and dedication. He has studied, ‘so that I know what not to do’. He never analyses his grapes, only tastes them and he states very firmly that he makes wine according to his own taste. And he only makes one red wine from his vines, taking time to get the right blend each year. His vines are on a mosaic of different terroirs, with sand, clay, alluvial soil and some vines face north. The main thing is enjoyment; he is not looking for concentration in his wines, but sheer drinking pleasure. Wine is after all made to be drunk and enjoyed.

His vineyards are organic, but not biodynamic; everything is handpicked; he uses natural yeast and keeps the sulphur levels as low as possible. And the wines are aged in barrel, but in larger wood, rather than small barriques. He considers the wines of the Languedoc too rich for barriques; barriques are better for less ripe wines, with less concentration. I think he has a point. And he enthused about Carignan; ‘it’s the Pinot Noir of the Languedoc, a fabulous variety’. His Carignan vines are quite old, between 60 and 30 years. There are no rules in the final blend; he observes how each variety evolves, but may begin blending in the fermentation vat, with the final blend after about twelve months. 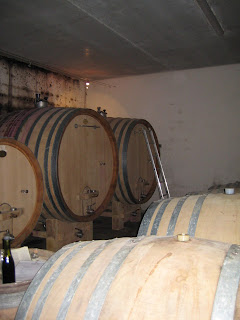 Our tasting began with
2009 Rosé, Vin de Pays du Gard
60% Mourvèdre, 30% Carignan, with some Grenache and Syrah. The grapes are pressed and the colour is a delicate pelure d’oignon, or onion skin pink.. The wine is elegant but powerful, nicely rounded in the palate, but not too heavy, and very satisfying.

Then we tried the 2006, with the same blend. It was very intriguing, with a little more colour and quite a nutty nose, and on the palate, hints of almonds, citrus fruit and honey, with some refreshing acidity.

Some barrel samples came next – a perfumed Syrah, with fresh peppery flavours; a Carignan blended with a little Mourvèdre, with some mineral notes and lively red fruit. 2009 is a very good vintage in Langlade. A pure Carignan had the elegant rusticity that I associate with the variety.

And then we tried the 2008 Coteaux du Languedoc – 31€
It had just been bottled so the nose was quite closed. It was firm and peppery, with an elegant balance of tannin and acidity, with minerality and fruit and a refreshing finish, with 12.5º alcohol. Pedreno observed that 2008 is the coolest vintage since 1996 and declared adamantly that he does not like overripe flavours.
Next we tried the 2007, with some viandé hints on the nose, and a rounded palate. The Syrah contributed some Syrah spice and the Carignan adds some white pepper. There were some mineral notes and an elegant balance and finish. Then we were treated to 2003. Picking for this began on 26th August. There were some warm notes, but it was certainly not heavy or overly rich. In fact it was delicious. This was the first vintage for which Pedrono used no barriques at all, just demi-muids. My notes mention elegance, herbal, leathery, white pepper – lovely and long.

He related his experience in Gigondas with Yves Gras from Domaine Santa Duca. They agreed to make a wine together in 2008, so he went over to Gigondas on 10th September to select the grapes. After a day of tasting grapes, the choice was made and Yves said: when shall we pick? In a month’s time, as usual? ‘No, tomorrow’ was Pedreno’s response. The wine was already at a potential 14 º. It was fermented in a concrete vat and then matured in 40 hls foudres and is a blend of 60 % Grenache, 30% Mourvèdre with some Syrah and Cinsaut. It had just been bottled, so the new wood was still quite apparent, but there was also fresh raspberry fruit, with an elegant balance of acidity and tannin. As it happened we had been with friends in Gigondas the previous week, and the difference was palpable. Here was an elegant Gigondas. A week earlier I would have thought that an oxymoron. 28€

Pedreno also has access to some Chenin blanc that was planted in the mid-80s by Henri Arnal, one of the pioneering wine growers of Langlade. It is fermented in demi-muids, just 20 % new, and spends 18 months in wood. There is a touch of oak on the nose of the 2008, with hints of orange peel and citrus fruit and some dry honey. It was very intriguing. 25.50€

And in 2003 he made a dessert wine, a vin de table called Mitis, from raisined Chenin grapes, which were picked a month later, with the intention of making a soft wine, not liquoreux, with 60 gms/l of residual sugar. It was very intense with notes of barley sugar and quince paste and rounded on the finish, with an elegant balance of sugar and fruit, and some refreshing acidity. It was so good that I found myself unable to spit. Vous avez craché dedans – spat internally –or swallowed, Pedreno observed. 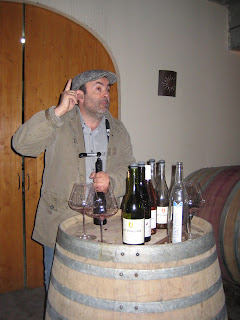 Louise Hurren said…
So glad to see you are blogging again! I was beginning to wonder if something was wrong... nice to read you again. Best wishes, Louise
3 July 2010 at 09:14