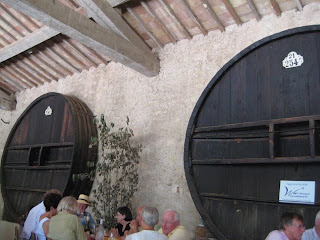 There is no shortage of splendid wine entertainment in the Languedoc during the summer months, and countless opportunities to taste and discover new estates. So on Sunday, at a friend’s suggestion, we found ourselves at Domaine de la Clapière, a lovely old property just outside Montagnac, that was bought four years ago and substantially restored by Sophie and Xavier Palatsi. The occasion was a small gathering of wine producers, organised by Dominic George (no relation) who runs a wine club called Languedoc Select, selling the wines from some sixty growers in the Hérault, Gard and Aude. Visit www.languedoc-selection.com for more information. Dominic is an enterprising guy and also organises wine tours – www.languedoc-wine-tours.com

Sophie Palatsi at Domaine de la Clapière provided her lovely old barn – except that is not quite the right word as on one side it is open to a shady courtyard with mature plane trees. The wine growers were at one end, with wines for tasting and the rest of the barn was taken up with tables for a delicious buffet lunch. 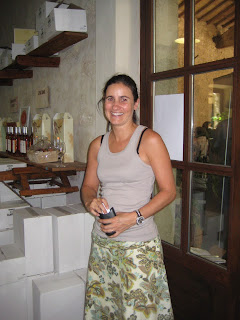 It seemed polite to taste our host’s wine first All her wines are vins de pays, as her vineyards fall outside the appellation of the Languedoc, which seems rather illogical, given that Montagnac is one of the villages of Picpoul de Pinet. Her Rose Jalade 2009 was everything that good rosé should be; it is mainly Cinsaut, with a little Syrah and Carignan and a drop of Cabernet Sauvignon. The colour is a delicate pink, with some rounded ripe strawberry fruit. At 4.50 € I thought it fantastic value.

I liked her red 2009 Jardin de Jules too, also 4.50€, and asked who Jules was, to be told it was the name of the plot of vines, not her father or son. The wine is a blend of Merlot, Cabernet Sauvignon, Syrah and Carignan, with some ripe cassis hints on the nose, and supple tannins and ripe fruit on the palate. It was aged in vat, which makes it engagingly supple on the palate.

2007 Gatefer, a Merlot - Cabernet Sauvignon blend was too oaky on the palate for my taste, and 2006 Etincelle, a pure Syrah, was dense and concentrated. She made just 3000 bottles, with a yield of 15 hl/ha. The wine was rich and oaky after a good year in barrel, with ripe rounded fruit, so that it promised well after some bottle ageing.

Domaine Jordy was another new estate for me, at Loiras, a village between Clermont l’Herault and Lodève. M. Jordy’s 2009 Viognier Vin de Pays de l’Herault is lightly peachy, with fresh acidity for 6.20€ I also liked the 2009 rosé, a Coteaux du Languedoc, blend of 80% Syrah, with some Grenache and Carignan. It was quite mouth filling with ripe strawberries and fresh acidity on the palate. And we finished with the Tentation red, Terrasses du Larzac 2008, a blend of Syrah, Grenache and Carignan at 7.20€. The nose was ripe and spicy with certain freshness on the palate. It is drinking beautifully now.

Jorge Masiakiewicz from Domaine St. Ferréol at Nizas was showing a pair of Viognier and disproving a theory that Viognier does not age well. His 2007 Viognier Vin de Pays d’Oc was ripe and peachy with some integrated oaky notes and a rounded finish. 8.00€ His 2006 Viognier had filled out so that the palate was much richer and fuller. The effect of an extra year’s bottle age was quite dramatic.

Simon Coulshaw from Domaine des Trinités in Roquessels was there too, and also Deborah and Peter Core from Mas Gabriel in Caux, but as I am doing cellar visits with them next week, we said hallo, but I didn’t taste. Watch this space for another posting. 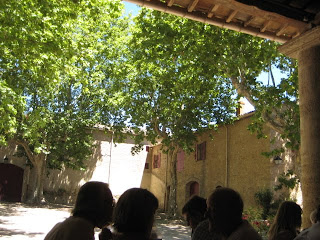 Louise Hurren said…
Hi Rosemary, thanks for flagging up Domaine de la Clapière (new to me). I shall read your notes after your tasting with Mas Gabriel with great interest; they are part of the Outsiders group presenting their wines in London in November 2010 (more info available on facebook http://www.facebook.com/pages/Outsiders-rocking-the-Languedoc-wine-scene/132255080138560?ref=ts