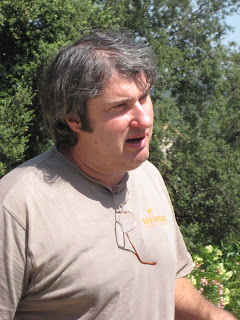 The appellation of Faugères seem to attract more than its fair share of foreigners, with a considerable amount of investment in the area by outsiders. Vineyards have changed hands, and new estates have been developed. One of the rising stars amongst the newcomers is Domaine des Trinités in Roquessels. Simon Coulshaw is British, and his wife, Monika, comes from Barcelona. Simon has always enjoyed wine; he was brought up in Paris, so wine was an everyday occurrence. He did quite a bit of wine-making early on, and then worked in IT, until in 2004 it was time for a career change and he elected to do the two year course at Plumpton in East Sussex. He even thought about buying land in Sussex, but southern reds are his real passion, and so he began the search for vineyards and a cellar in the Mediterranean, looking in Spain as well as in the Midi. The Rhône valley was out of the question; he couldn’t afford anything more than Côtes du Rhône, but in the Languedoc good vineyard land is still affordable. However he had very precise ideas as to what he wanted, and found it with the 107th property! In the village of Roquessels, in the heart of Faugères. He was so excited that he completely forgot, to Monika’s dismay, to look at the house which came with the cellar. And why so many rejects – above all, he wanted a interesting terroir, not vineyard land on the plain. And he was looking for unrealised potential. If you buy an estate that is already doing well, there is nowhere to take it. What is now called Domaine des Trinités fulfilled these criteria. The vineyards comprise 15 hectares of Faugères, around the village of Roquessels and nine hectares of the newer cru of the Languedoc, Pézenas, around the village of Montesquieu. The previous owner had produced much more bulk than bottled wine, so there was enormous scope for development. The cellar was already well-equipped, with stainless steel vats and a very efficient basket press from 1928!

Simon and Monika arrived at Domaine des Trinités in April 2007 and had a very successful 2007 vintage. Simon made ten different wines, with various experiments, broadly two entry levels, two middle range, a rosé, and a top end Pézenas. He also has some Viognier and some Roussanne for white vins de pays. 2008 was significantly more problematic as most of his vineyards were affected by a severe hailstorm a week before the harvest. Consequently all his 2008s were sold off in bulk. Happily things looked up for the 2009 vintage and that is what I tasted last week.

2009 Viognier Vin de Pays d’Oc – 4.95€
Light colour ; quite a delicate, dry, peachy nose. Fresh acidity; herbal notes and a touch of minerality. Quite refreshing acidity. No strong varietal character, but none the worse for that.

2007 Roussanne, Vin de Pays d’Oc – 4.75€
Light colour. Some herbal notes and white flowers on the nose. Quite a floral palate, again with herbal notes and a streak of minerality. Good acidity with a fresh finish and a satisfying mouth feel. A certain weight on the palate.

Simon now makes two Pézenas wines, but in 2007 they had to be called Coteaux du Languedoc or Langeudoc tout court. Blame French bureaucracy.

2007 Languedoc Tradition 4.95€ 70% Grenache, 20 % Syrah and 10% Carignan. Medium colour. Garrigues and spice on the nose. Quite a leathery palate. Medium weight. Easy leathery fruit and some supple tannins. Medium weight. The wine is given two weeks pre-fermentation maceration, which extracts colour and flavour. Grenache is thin skinned, so if you do a post-fermentation maceration, it is apparently very easy to over-extract.

2009 Pézenas Tradition.- 5.50€
Good colour; quite closed perfumed spice on the nose, but much more forthcoming on the palate. Some lovely savoury notes and supple tannins.

2007 La Dèves – 7.60€ A single vineyards, that will be Pézenas for the 2009 vintage. 50% Grenache Noir, 20% each of Carignan and Syrah, 10% Mourvèdre. Given a longer cuvaison. Medium colour; more complex flavours, medium weight and some lovely, firm fruit.

2009 Faugères, le Portail – 5.95.
The entry level Faugères, with some lovely ripe spice on the nose. Fresh youthful red cherries on the palate. Ripe, supple and gourmand, with freshness coming from the schist of Faugères. The blend is 60 % Syrah, 30% Grenache, and 10% Mourvedre.

2007 Faugères, les Maurels – 8.50€
This has been a favourite since we first tasted, or rather drank it in January 2009. It is a single vineyard of 70% Syrah and 30% Mourvèdre. 20 % of the wine is aged in oak. There is dry leathery spice on the nose, with a subtle spicy palate, with some balancing tannins. Medium weight, still very youthful and satisfying mouth feel.

And we finished with a barrel sample of a 2009, from a bio-dynamic vineyard, a blend of one third each of Grenache, Syrah and Mourvèdre. Simon harvested just 700 kilos of grapes from one hectare. The nose is young and firm, with some lovely fruit. There is a firm streak of tannin on the palate, with weight and body, and an element of sucrosity or richness. It displays enormous potential, but Simon doesn’t know when he will bottle it. And he also has a Syrah Viognier blend up his sleeve.

Definitely an estate to watch, and great fun for a cellar visit