A brief sortie out of the Languedoc into the southern Rhône, to Châteauneuf-du-Pape.

Perceived wisdom has it that the terroir of Châteauneuf-du Pape-depends upon the galets roulées which cover the vineyards, and on that terroir alone. Not so, as I found out when I visited Ogier’s cellars in the village of Châteauneuf-du-Pape last month. They have a small vineyard outside their cellars, really more of a garden, consisting of four small plots of vines, with four quite different and distinctive soils.

Didier Courturier, the winemaker at Ogier and the man behind the quality of their flagship vineyard, Clos de l’Oratoire, was eloquent with his explanation. Much is made of the galets roulées and the thirteen different grape varieties, but usually without any mention of the other terroirs, which also have an impact on yield and flavour.

First he talked about the éclats calcaires, or limestone fragments, the oldest terroir that comes from marine sediments. Châteauneuf lies at 200 metres and the land was covered by the sea about 150-200 million years ago. These are the same soils that you find at the top of the Mont Ventoux – from distance it looks like snow, even in the height of summer. They are generally in the eastern part of the appellation and count for about 20 per cent of the total. 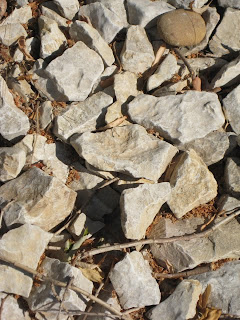 Next was a type of fine, fravelly sand, that was about 15 – 30 million years old. The geological term in French is molasses, but the local name in Châteauneuf-du-Pape is safres. You will find safres in the western part of Châteauneuf and they account for about 20 per cent of the area. 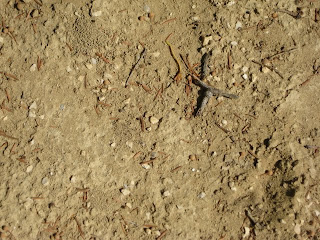 Grès rouges, or redstone, is the third variation, again formed from an inland sea, but with rocks and stones, often containing fossilised shells. This account for just three per cent, but the quality impact is undeniable. 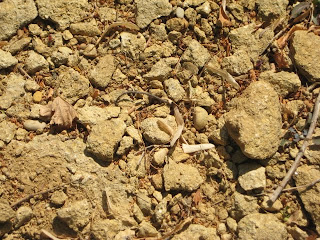 And finally there were the famous galets, which were brought from the Alps by the waters of melting glaciers. But there is not just one type of galet, but two. The best are those on the coteaux, the slopes in the northern half of the appellation, where they are mixed with clay, which allows for the retention of water. The pebbles absorb the heat, but the soil does not dry out. Then there are larger galets, but with very little clay, in the southern part of the appellation. Here the lack of clay is detrimental to quality, as the vines can suffer from lack of water. 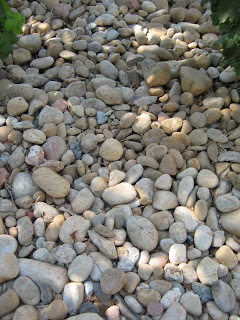 A broad generalisation would suggest that Grenache Noir performs best on the galets; Mourvèdre likes the calcaire, while Cinsaut does well on safres and Syrah on grès rouge. And Ogier readily admit that they do not have all thirteen varieties, but prefer to concentrate on Grenache, along with Mourvèdre, Syrah and Cinsaut.

But it is all very well to discuss soil types. What really matters is the impact on taste and they have made produced a wine from each soil type, with the same blend, vinified and aged in the same way, so that it is possible to discern the variations of flavour.. The blend is 75 per cent Grenache Noir, with 15 per cent Syrah and some Mourvèdre and Cinsaut, aged in wooden vats. All four wines came from the 2007 vintage, a year that was quite wet until the end of August, and then saved by a warm and dry September.

2007 Eclats Calcaires Medium young colour. Ripe berry fruit with some spice on the nose. On the palate there was some dry spice, with some leathery notes. The tannins were quite firm and fresh, with a warm, mouth filling finish. There was an underlying stony minerality, and maybe also a hint of eucalyptus.

2007 les Safres Medium colour. The nose was riper and more rounded, with a richer palate and more supple tannins. Didier observed that there is a view that sand makes for lighter wines, with less concentration. In fact he thought it gave more elegant and aromatic wines, with more finesse on the palate. Château Rayas, for example, comes purely from safres, and that ages beautifully.

2007 Grès Rouges Medium colour. Firm, dry spice on the nose, with some leathery notes, with more substance and body on the palate, more leathery, with a mineral note. It was warmer on the palate, with quite an alcoholic finish. The tannins were more concentrated with some red fruits. Didier thought it a great blending component.

2007 Galets Roulées The colour was deeper and you sensed the heat of the galets in the wine, with riper more rounded fruit and supple tannins and very good concentration. There was some lovely rich spicy red fruit on the palate. The clay protects against water stress, and the stones absorb the heat during the day to release it at night. It’s a great team effort, to the benefit of the vines. 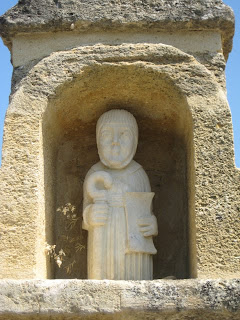 And our tasting finished with Ogier’s flagship wine, 2007 Clos de l’Oratoire. That comprises two thirds eclats calcaires, along with some safres and some galets roulées and the blend is 80 per cent Grenache, with 8 per cent Syrah, 7 per cent Mourvèdre and 5 per cent Cinsaut, which are very old vines, grown on safre. This was delicious. Medium colour. Lovely elegant leathery notes on the palate, rounded with some ripe spice on the palate, with a supple tannic backbone and a warm long finish. It was a satisfying reflection of three terroirs.
Email Post