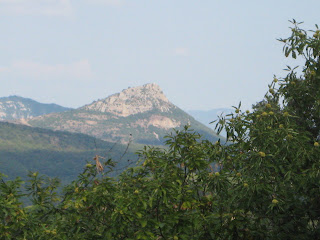 The little village of Cabrières is dominated by the Pic de Vissou, an extinct volcano that rises to 480 metres. It makes for a dramatic skyline. Otherwise Cabrières is a rather sleepy place; there is a mairie, a school, a grocer’s, a café at one end of the main street, and the wine cooperative at the other end, which accounts for the livelihood of much of the village. This is one of the more successful cooperatives of this part of the Hérault. Cooperatives from nearby villages have closed, or are amalgamating with other neighbouring cooperatives, in an attempt to cut productions costs and share marketing efforts. Cabrières continues proudly to stand alone.
I asked the director, Bernard Dross, to what he attributed its success. It’s a small cooperative with just 70 members, accounting for a total of 330 hectares. About half the members make a living from their vines; the rest are retired, for whom their vines are a hobby. Nonetheless the average age of the members is quite young, with a good core of them aged between thirty and fifty. This is quite unusual for a cooperative in the south of France where the average cooperative tends to have a conservative membership, that is approaching retirement and traditionally rather set in its ways. And there is also a dynamic unity of spirit and shared aims and aspirations..
Another advantage for Cabrières is its historical reputation, which, unusually for the Languedoc, is based on rosé, rather than on red wine. There is a reference to the vin vermeil of Cabrières in the archives of Montpellier, dated 1357. It also had a reputation at the court of Louis XIV for its medicinal qualities, thanks to the efforts of the village priest, Fulcrand Cabanon, who is said to have introduced the wine to the king. Mme de Sevigny refers to it in her letters. The cooperative founded in 1938, but only really developed its activities after the war. It was one of the first to put wine in bottle, in the 1950s, namely Vin Vermeil, under the brand name of L’Estabel. The description Vermeil or vermilion, implies a deeper colour than most rosé, more a light red, and L’Estabel is the name of a nearby hot spring, which only appears about once every 50 years; the last occasion being in 1996.
Cabrières was one of the first Vin Délimité de Qualité Supérieure or VDQS of the Languedoc, and then was incorporated into the appellation of Coteaux du Languedoc in 1985. Tt is now aspiring to an Appellation d’Origine Protégée, or AOP, the new category that is expected to replace Appellation Contrôlée. This is not the place to discuss the pros and cons of that particular development in French wine law. The significance for Cabrières is whether one village is acceptable as an AOP, with a cooperative that accounts for about ninety per cent of the production, alongside three independent wine growers. M. Dross is optimistic, as he is articulate about the individuality of Cabrières. The wines are quite distinctive from neighbouring villages, for the hills around Cabrières give its vineyards a very precise delimitation. They lie on a band of schist, very old soils, with a host of marine fossils. There is a fascinating display in the tasting caveau of the cooperative which explains the geology, and also describes the nearby copper mines, which were the earliest in France, dating back to 3000BC. They continued to operate until the middle of the 19th century.
Rosé can suffer from its seasonality. We often hesitate to drink rosé in the middle of winter, but M. Dross is insistent that it should not depend upon the seasons, and emphasises the historical reputation of the rosé of Cabrières. . The blend of grape varieties is different for rosé, compared to red wine, with a higher minimum percentage, 45 per cent, of Cinsaut, a grape variety that is particularly suitable for rosé. Of the three rosé cuvées, I like the Rosé Prestige best. The grapes are pressed after a three hour period of contact with the skins, rather than running off the juice from a vat, that will then be used to make red wine, and the flavour is delicate and fruity. The Cuvée Fulcrand Cabanon, named after the famous priest, has Syrah in the blend, which makes a richer, fuller-bodied wine, while L’Estabel Vin Vermeil, sporting the original 1950s label is ripe and rounded.
Nonetheless red wine is also an important part of their repertoire, with some spicy aromatic flavours coming from the schist soil. The Prestige red, a blend of Grenache and Syrah, without a trace of oak, is fresh and peppery, supple and easy to drink. They are experimenting with more serious oak-age cuvées, with Château Cabrières making a serious mouthful of rounded fruit, with firm oaky tannins. However, the supple unoaked flavours have the edge for my taste buds.
As well as pink and red Cabrières, the village comes within the tiny appellation of Clairette du Languedoc, based on the grape variety, Clairette. The flavours are dry and delicate; best was the Cuvée Fulcrand Cabanon made from 40 years vines. And our tasting finished with a late harvest Clairette du Languedoc, recalling the old tradition of using Clairette for sweet wine. It was lightly honeyed, with fresh acidity; simply tasting of ripe grapes.
Email Post

Liz Mortensen said…
Hello from Norway!
I have a rather tricky little Languedoc wine question for you if possible.. but there is no contact/mail at your blog, if you could send me a mail at liz.mortensen@gmail.com

Val said…
Rosemary, How I wish I'd found you 2 months ago! I just spent 1 month in Languedoc-Roussillon in a French wine course (not enough time at all, I know) but I like this region because it is little known, diverse, and so interesting to me. I look forward to reading more over the course of my varied studies! Valerie
3 February 2011 at 15:25

Rosemary George MW said…
Valerie - do tell more about the French wine course. And so glad you enjoy the region as much as I do.
4 February 2011 at 14:03

Val said…
I had just finished a 9-month wine studies and enology course in Tuscany as a retirement gift to myself. I found that 1 day per region in my Wines of the World course was a teaser and wanted to learn more indepth about French wines, but in their respective terroirs. So I found a charming little culinary academy in Cap d'Agde, to start. They have a wine teacher, Valerie, who is very knowledgeable on all the regions - very passionate. You may even know her, but if not, I can introduce you in e-mails. She took us to the Wine Festival in Montpellier, to Banyuls (!), Corbiers, and brought in a guest lecturer for an in-depth lesson on Medoc. The more I learn, the more I realize I don't know, but I do know I'm not done exploring France and it's wines. My e-mail is vlcaruso@gmail.com.
4 February 2011 at 18:32

Rosemary George MW said…
Valerie, Tried to send you an email but it was returned to sender. Where did you do the course in Tuscany? What a wonderful retirement present. And do tell moe about the Adge course. Is there a website?
8 February 2011 at 11:49

Val said…
Hello Rosemary, In Tuscany I attended a culinary institute called Apicius and found it to be quite comprehensive and what I call a "multidimensional experience." We spent much time visiting wine makers, vineyards, even spent a week harvesting. This past fall I got to taste a Chianti Classico still in evolution from grapes I had harvested the past year. An amazing experience. Here is a link to the Gastronomicom wine program in Cap d'Agde - Valerie DeSavis is phenomenal. http://www.gastronomicom.fr/cours-de-vins,us,8,61.cfm

I'm still considering a longer course, and she's currently in the process of redesigning some of the wine programs.
8 February 2011 at 17:20