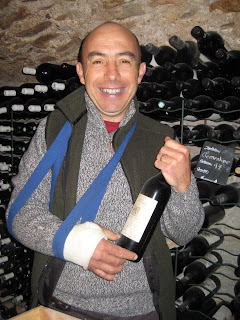 When I first visited Montpeyroux in the mid-1980s, the choice of wine was the coop, or the coop. There were no private estates until the end of the 1980s. Sylvain Fadat at Domaine d’Aupilhac was one of the first pioneers, along with Domaine du Plô, which no longer exists, Domaine d’Aiguelière, and Mas Jullien in nearby Jonquières. I first met Sylvain in the early 1990s, and have watched his progress over the years, as the estate has grown – he now has 29 hectares - and the wines have evolved. Montpeyroux too has grown, so that there are now about 20 estates. Montpeyroux holds a wine fair every two years – this year it takes place on Sunday 17th April – which provides a great opportunity for some serious tasting, with all the producers showing off their wines.

A visit to Montpeyroux last week was a great chance for a catch up. First we tasted wines from vat that were just about to be bottled, literally later that day

Lou Maset white, Vin de Pays du Mont Baudile – 8.00€
A blend of Ugni Blanc, Grenache Blanc and Chardonnay. Although Sylvain essentially has created his estate himself, he did start with some family vines, including a small vineyard of Chardonnay, planted by his grandfather, and kept for sentimental reasons. The wine is fresh and rounded, offering easy drinking.

Les Cocalières blanc, Coteaux du Languedoc 16.00€
A blend of Marsanne, Roussanne and Rolle. Montpeyroux does not have an appellation for white wine; there are too few producers – the INAO would say insufficient representation, so it will become Languedoc in due course, as Coteaux du Languedoc disappears The wine is fermented in 600 litre barrels and the grapes come from new plantings up in the hills above Montpeyroux, a cooler site and a fabulous spot, where Sylvain has cleared garrigues. The oak is very well integrated, with some white blossom fruit, minerality and textured layers of flavour. Very satisfying.

2010 les Servières, Vin de Pays de l’Hérault 8.50€
A pure Cinsaut, from some very old vines. Quite a deep colour, with fresh raspberry fruit. A lovely example of the appealing fruit of Cinsaut, with acidity and tannin and a streak of minerality on the finish.

We tried a few barrels, some Syrah, and some Carignan, and the components of the future 2009 Montpeyroux. Sylvain used to make a Cocalières rouge and an Aupilhac rouge, but has decided that they make a much better wine blended together, definitely a case of 1+ 1 = 3. Cocalières is a cooler site, with fresher wines, while the wine from the original Aupilhac vineyard is denser, warmer and more tannic. Together they combined fresh perfume and richness.

And then for some tasting from bottle: in his little tasting caveau under his house in the rue du Plô in the centre of Montpeyroux.

2009 Lou Maset, Coteaux du Languedoc – 7.00€
A blend of Grenache, Cinsaut with a little Carignan, Syrah and Mourvèdre. This is ripe and easy, with supple fruit, and nicely rounded. All the wine spends six months in foudres.

2009 Le Carignan, Vin de Pays du Mont Baudile - 14.40€
Sylvain has long been an enthusiastic proponent of Carignan; he had some in his first vineyard, and people said ça ne vaut rien, but he didn’t want to pull it up, partly as he had so few vines at the time. And his 2009 shows how right he was to keep it. It was aged in foudres and has a lovely brambly nose, with quite rounded, concentrated fruit on the palate, some tannin and a spicy note on the finish.

2008 Montpeyroux, Coteaux du Languedoc - 13.30€
A blend of Syrah, Mourvèdre and Carignan from the Aupilhac vineyard, aged in barrels and demi-muids and then in foudres, so that it spends two winters in wood. Quite firm solid fruit, with some brambly notes on the nose. On the palate some leathery notes and some supple tannins, with dry spice on the finish. A serious mouthful.

2008 Les Cocalières, Coteaux du Languedoc 15.50€
The last vintage of this particular cuvée, from Syrah 65%, with 25% Grenache and some Mourvèdre. Quite a rounded nose; leathery and perfumed, with a nice texture and freshness and minerality on the palate. Lovely nuances of flavour.

2005 la Boda, Coteaux du Languedoc, Montpeyroux – 24€
Sylvain described this as a blend of two terroirs, Syrah from les Cocalières and Mourvèdre from Aupilhac. He whole bunch ferments in a demi muid and ages the wine in new oak. It is solid and dense with notes of chocolate and leather, a concentrated mouthful, but it doesn’t have the charm of the others. Sylvain ruefully observed that ‘le moins bon est le plus cher!’ Well he does have to pay for that new oak!

And then we were treated to some older bottles

2005 les Cocalières, with a fresh nose and quite rounded, maturing leathery notes on the palate.

1999 Le Carignan – quite a meaty nose, but nicely balanced palate, with intriguing red fruit and notes of maturity. Very satisfying.

1996 Montpeyroux – Lovely leathery fruit, quite elegantly leathery fruit on the palate. Mineral notes, with some smoky fruit. Layers of flavour, and a great example of how well the red wines of the Languedoc develop in bottle.
Email Post