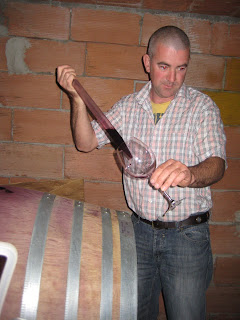 Faugeres is a relatively small and compact appellation, compared to neighbouring St. Chinian. There are now nearly fifty estates, half of which have been developed in the last ten years. Sometimes it is a new generation of a local family; sometimes French from elsewhere, and increasingly so, there is an influx of foreigners, English, Belgium, Australian. …..

So how does an Australian meet a girl from Ireland and land up in the village of Laurens? Paul Gordon had discovered wine while working in London for Terence Conrad; he comes from Sydney and when he went back to Australia, he found a job with the Australian Oddbins and studied wine-making through a correspondence course at Charles Sturt University. He then worked a vintage at various estates, Brokenwood, Domaine Chardon and Hardys, and then as a flying winemaker in the Gard and in Spain, and also in New Zealand, at Isabel Estate in Marlborough. Isla was backpacking in New Zealand at the time, and turned up at Isabel estate to earn some money in order to continue travelling….. they spent five years in New Zealand and then it was time to come to Europe – Spain was the first possibility – Priorat perhaps. ‘the wines are fantastic but it is simply too expensive. Land costs too much. An entry level wine would have to retail at 20€’. And so they started looking in France. They wanted to grow Grenache, Syrah and Mourvèdre, and someone advised Roussillon, Montpeyroux, Pic St. Loup or Faugères. And they realised that Faugères ticked all the boxes : ‘it’s close to the mountains; close to the sea; has very good soil and great wines; nice villages and it is not too busy’. They looked for vineyards to rent and someone offered them 5.5 hectares, in two blocks just outside the village of Autignac. And they found a house, in Laurens, with a large garage, that was perfect for some small vats and a few barrels.

Paul and Isla took on their first vines in March 2009, just in time to prune them. At the end of 2009 they bought a small vineyard of Syrah, five year old vines on grey schist, and they have also bought half a hectare of Mourvèdre and acquired some 60 year old Carignan. They now have about six hectares, the classic five varieties of the Languedoc, as well as some Aramon, and are eventually aiming for ten hectares, and maybe some white varieties.

The production is tiny. They have virtually sold out of their first harvest. In 2009 they made 6000 bottles, and in 2010 13,000. They very generously opened some of their few remaining bottles for me to taste..


2010 Faugères Rosé,
A blend of Cinsaut, Grenache and Mourvèdre, all pressed immediately in a basket press, which gives more colour than a pneumatic press. Paul was quite blunt. It’s a cash cow.’ It is quite a deep coloured rosé, a good food rosé, with rounded ripe mouth filling fruit – you might also say a winter rosé, with body and texture. Paul gives it a long slow fermentation. He has a very efficient refrigeration system. ‘You mustn’t let rosé get too hot’. The Mourvèdre was tricky in 2010, with rain at the end of the season causing problems with ripening, but this had the effect of lowering the overall alcohol level to 12.5°

2009 Faugères –
A blend of 60% Grenache grown on a cooler, north west facing slope, with 25% Carignan, 12% Syrah and a drop of Mourvèdre. The Carignan is aged in a new 500 litre barrel. Good colour. Quite peppery, spicy fruit, with some ripe cherries from the Grenache. A lovely freshness, with some spice. Quite furry tannins, which will fade with time. ‘You must get your Grenache skins absolutely ripe’ or else you can get some unwelcome acidity.

There is no filtering, no fining; Paul uses natural yeast and as little sulphur as possible. The work in the vineyard – this is Isla’s domaine – is organic, with minimum use of sulphur and copper. Powdery mildew is the main problem.

Their aim is to make serious wines with ageing potential, but Paul is not afraid to experiment. So next came:

(2009) Vin de France, essentially from Syrah and Aramon. Aramon is very thick skinned; with large juicy bunches of grapes. It gives what one could only describe as a funky note to the wine. The colour is deep, and the nose quite solid and dense, with ripe berry fruit, some firm acidity and some furry tannins and a dry finish. There are some peppery notes too

2009 Les Espinasses - Named after the vineyard in Autignac, and mainly Syrah, 30 year old vines, grown on a south facing slope in schist and surrounded by garrigues. The crop is 15 hl/ha. Good colour. The nose is quite rich and ripe, with smoky oak and berry fruit on the palate. Paul described this as ‘very handmade’, he uses a basket press and the wine has spent 14 months in a medium toasted 500 litre barrel. The grapes are virtually selected by hand, rejecting any shrivelled berries, and there is a low juice to skin ratio.

And then we adjourned downstairs for some tasting from vat and barrel, beginning with
2010 Misterioso Vin de Pays d’Oc. It is due for bottling next week. A blend of Grenache Noir and Mourvèdre, but the blend may vary from year to year. Medium colour; young ripe fruit, quite perfumed, with medium body. It needs a little time to settle down, but promises well.

And next some barrel tasting:

Grenache with a little Carignan. The Carignan had not been pruned for at least one, if not two years when they took over the vineyard. This had some smoky cherry fruit and a lovely freshness and perfume.

2010 Carignan – again some lovely fruit, raspberry rather than cherries, and the wine did not seem to have taken up too much oak. Fresh acidity and tannin, and an elegant finish.

2010 The Syrah component of Les Espinasses. Deep colour; ripe and intense – the oak is quite present, but the wine is still a baby. Paul gave it a four week post-fermentation maceration, and kept 15 – 20% as whole bunches, with the stems.

Clavelle vineyard, Syrah with 15% Mourvèdre. Again he kept 15 – 20% of the stems. Deep colour; quite dense and perfumed, with ripeness and freshness. Good structure.

I suddenly realised that this was the first time that I had tasted every single barrel in somebody’s cellar.

And next year Paul wants to try a fermentation of Grenache Noir, all as whole bunches, following the example of the Châteauneuf-du-Pape estate. Domaine du Pégaü. Nothing is going to stand still here and I sense that Domaine la Sarabande has far to go. 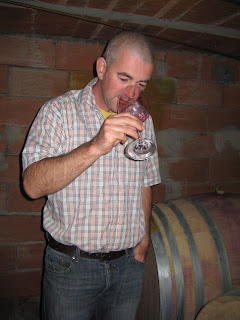 claralara said…
How exciting, so great to know that this wine region has some new and adventurous wine makers with new ideas, keep an eye folks :)
6 April 2011 at 21:11

ABrq said…
I look forward to enjoying what promises to be some excellent wines once you get some back in stock!
7 April 2011 at 14:03