A DAY IN THE MINERVOIS - Part 2 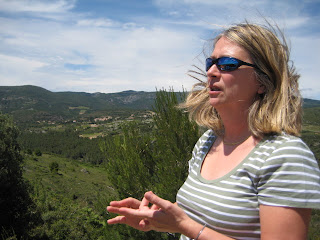 To Château Ste. Eulalie near Félines-Minervois with Isabelle Coustal – and a brief hallo to her husband Laurent. First a drive through the vineyards; they have 35 hectares in one large block, mainly argilo-calcaire and very stony. There is an old river bed, with fossils. The highest vines are at 260 metres, and there are some great views of the Montagne d’Alaric in the distance. These are some of the most northern vineyards of Minervois, with the Montagne Noir not too far away. The Pic de Nore rises to 1200 metres; apparently the fact that Montagne Noir is covered with trees, which makes it look very sombre, hence the name.

Isabelle practices lutte raisonnée, and uses weed killer under the vines, but not between the rows. Their first vines were bought in 1996 – first 25 hectares, and then they acquired another ten hectares the following year. Carignan accounts for 30%. Everything is mechanically harvested; Isabelle considers it to be much ‘cleaner’.

The old cellar, dating from 1868, has some old stone vats that are buried below ground; the cellar walls are thick, nearly one metre thick. For their barrels, they favour the Burgundian cooper Cadus, and replace a quarter of their barrels each year. They work by gravity – and do no carbonic maceration and they do use their vin de presse, but don’t press too hard. You sense that Isabelle is a thoughtful winemaker. 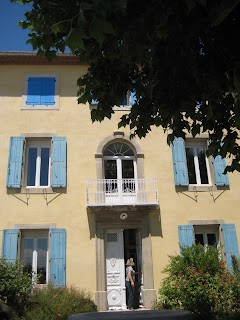 2010 Minervois Rosé, Printemps d’Eulalie - 4.80€
50% Syrah, 40% Cinsaut and 10% Grenache and Carignan. Saigné.
A little colour; a reddy pink. Quite ripe, rounded strawberry fruit. Fresh, with good acidity. They begin with Cinsaut and then add the Syrah juice, and finally Carignan and Grenache and the slow fermentation takes about a month. The grapes for rosé are picked first but the fermentation finishes last.

Good colour; notes of tapenade and a hint of orange. A hint of oak on the nose, and nicely integrated on the palate. Quite finely crafted tannins. Rounded fruit and some tapenade and black cherries. Medium weight.

Isabelle explained that the soil is very calcaire so not very acidic, but that will make for wines with a certain fraicheur. They don’t want over ripe grapes or ‘super extraction’. They do some remontages and délèstages, and follow their taste buds. The grapes are destemmed; the stalks of the Grenache are very fragile, and they don’t want any green tannins from the stalks. The harvest date is decided according to the maturity of the tannins.

Medium colour, a touch of oak, quite a firm nose; quite dry with a hint of warm tapenade. Nicely rounded palate; quite elegant and balanced some tannins and a certain structure. Good ageing potential. A certain freshness. 2008 was a cooler vintage than 2009.

2009 Minervois, la Livinière, Grand Vin -16.00€
Isabelle explained that they were ‘dreaming of a cuvée like the wine their ancestors made’, so they took their oldest plots of vines, some 35 year old Syrah, 80 year old Grenache and 100 year old Carignan, fermented each variety separately and blended them just before bottling in April 2010. They wanted everything to be very simple, so that they would keep the purity of the fruit. I think they succeed. Good colour; lovely perfumed red and black fruit. Medium weight. Elegant tannins; quite concentrated but with finesse and elegance. A long elegant finish, with apologies for too many elegants, but they are deserved. And a great finale to a lovely visit.

And then we took a winding road to the village of Felines to find Domaine du Petit Causse. This is a relatively new estate in that Philippe and Maguy Chabbert only began bottling their wine in 2003. They had been members of the Félines coop, but it closed in 2002, so that was the cue for them to start making their own wine in their own cellar.

Maguy gave us quite an extensive tasting, a white, a rosé, a vin de pays Merlot and four different Minervois. I found the style of the wines quite sweet and soft, with generally not as much grip as you might expect from such wild terroir. A case of work in progress. 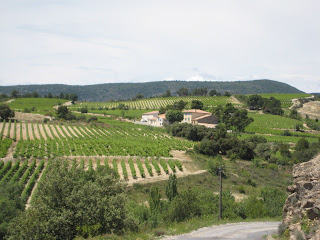