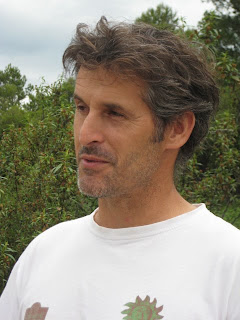 Cyril Bourgne is one of the more thoughtful and analytical wine makers of St. Chinian, and very committed and very focused. It may be something to do with his background. He does not come from the Languedoc and worked in Bordeaux, running Château Fieuzal for a number of years, before developing his own estate in St. Chinian. He now has 13 hectares of vines, and made his first vintage in 1999. He has a compact cellar on the outskirts of the town of St. Chinian. 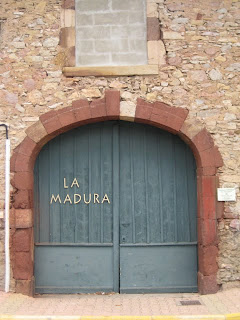 Perceived wisdom often has it that St. Chinian is split in two – schist to the north, and clay and limestone to the south, as the result of a geological fault. Reality is rather more complicated. Cyril has what he called four ‘grands ilots’ which are all quite different. There is a plot of Syrah in the north; he has grès, or sandstone, near the village of Pierrerue, and two different plots of argilo-calcaire, limestone éboulis, or rocks, near St. Chinian, and closer to Assignan his vineyards are on a limestone plateau, with very white stones. And with each grape variety grown on all four terroirs he has a veritable artist’s palette for blending. 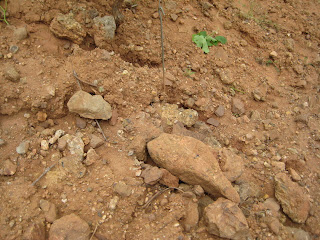 For Cyril there is no doubt about it: the specificity of St. Chinian is the variety of terroirs, that complement each other, as well as the effect on each grape variety. There is a world of difference between Grenache grown on argilo-calcaire and Grenache on schist. With argilo-calcaire the wine has more colour and tannin, with less exuberance on the nose, while on schist it is very aromatic, but with less colour and acidity. And you will find the same differences with Syrah. Cyril was also adamant that he wanted four cépages; he admits that he is frightened by what he called the ‘uniformisation’ of Syrah, so also has sizeable holdings of Grenache and Carignan, as well as Mourvèdre. He likes the freshness of Carignan and Mourvèdre. You have to be careful as both Grenache and Syrah can be too heavy. Elevage is important too. New wood here is an aberration; it’s maquillage or make up and adds to uniformity. The grape varieties here have sufficient expression and character not to need extra maquillage.

He talked about his work in the vineyard. The deeper the roots, the more freshness you obtain. He wants maximum aeration, and maximum leaf exposure, so that the vines are less sensitive to rot and disease. If the leaves are in the shade, they consume energy, and create a negative effect. And he limits treatments. Work in the vineyard pays off in difficult years, but it is rare to have a week of bad weather. We then got on to the subject of bio, organic viticulture. Cyril questions some of the treatments – with bio you may not use synthetic chemicals, but you can use copper and sulphur, which are also harmful He would rather use synthetic products, but in the tiniest quantities – in any case prevention is better than treatment. He is a bit cynical about the commercial value of bio – it’s marketing and politically correct. ‘I am against political correctness. There are people who don’t want to hear the truth about bio, as it disturbs them.

First we wandered round the cellar tasting 2010s from vat and barrel. Cyril makes two whites and two reds, rather in the bordelais manner. His red Classic is predominantly Carignan and Grenache with a little Syrah and Mourvèdre, aged more in vat than barrel. Medium colour; restrained perfume; subtle spice some lovely rounded spice and supple tannins. Good body. It was to be bottled shortly. A fresh finish, with fruit noirs, and some scent from the garrigues. Average yield in 2010 was 23 hls/ha.
2010 produced concentrated wines; the weather was dry was the grapes were ripening, making for small berries with thick skins. 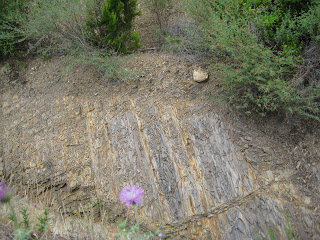 A barrel of pure Mourvèdre that will go into the Grand Vin was structured and fresh with good colour. It comes from two plots of Mourvèdre; one of grès and the other argilo-calcaire. Cyril observed that people here are afraid of Mourvèdre; he uses it for his Grand Vin with Syrah, as the two complement each other. Whereas Carignan gives freshness to the Grenache in the Classic.
He usually has two different batches of Syrah, from schist and from argilo-calcaire, but in 2010 blended them both together. Deep colour; quite a firm closed, restrained nose. Very perfumed fresh palate; peppery with a real explosion of fruit, with some fresh tannins. He has tried Syrah in new wood and feels strongly that it would be a shame to put it in new wood. I wondered about the typicity of St. Chinian – for Cyril it’s very difficult to define typicity – there isn’t any; the appellation is sandwiched between Faugères and the Minervois- and the wines give pleasure. 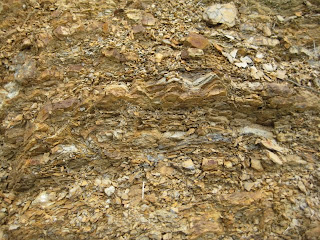 He then took us to look at his vineyards. The countryside is breathtaking, with bird song and the scent of cistus in the air. And the variations in soil were all too apparent. Cyril was adamant – it is diversity which counts. He leaf plucks – on the side of the rising sun. And aims for good air circulation. His method of pruning, he described as ‘creation maison. He does not like the cordon method, which is widely used in St. Chinian as it makes the vines age badly. Gobelet is better, but you can’t do use wires with gobelet, so his pruning is a compromise between the two, a short pruning, with five arms. 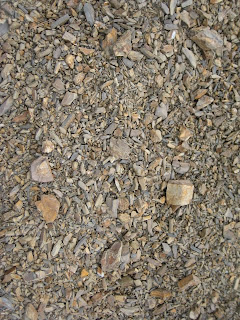 And then we returned to his house in the centre of the town to taste wines in bottle.

2010 Sauvignon, Classic vin de France 8.40€
Light colour, delicate mineral nose. Richer and more obviously mineral on the palate. Vinification and élevage in vat, on the lees to enhance the richness. He wants freshness, so picks relatively early, but not too early, as he certainly does not want any pipi de chat. And if Sauvignon is too ripe, the flavours are heavy. I enjoyed the minerality which developed in the glass, becoming a little more exotic, with some white blossom.

He has also planted a little Picpoul as he wanted a local white variety, that is as fresh as Sauvignon and ripe at the same time.

2009 Sauvignon Grand Vin – 14.40€
From the same plot, but fermented in old barrels with a ten month élevage on lees, with regular bâtonnage. The decision as to which juice will become which wine is made after débourbage. 2009 was a good year, but with a small yield. The wine has a little more colour than the Classic, with some restrained, understated oak. It is quite rounded, with good acidity, and has a certainly bordelais style – not surprising really considering what Cyril was making at Fieuzal. I also found a hint of fennel, which grows wild around the vineyards. And it will age well, as would a white Graves.

2007 Classic Red St. Chinian - 8.40€
A blend of 40% Carignan and Grenache, with 10% each Syrah and Mourvèdre. Usually the Syrah and Mourvèdre are aged in wood, and maybe a little Carignan. Cyril equated 2007 to 2001 – an easy vintage, that was ripe quite early and has produced supple velouté or velvety wines.
I found it quite firm and structured, with a fresh finish. There was good fruit on nose and palate, with a lovely mouth feel and good body. It was all very harmonious with lots of nuances and hints of the garrigues, but with a certain pleasing restraint. Still very young, with lots of potential. The grapes are destalked and the vin de presse was used in the Classic, but it doesn’t make the wine heavier or richer.

2007 Grand Vin St. Chinian - 14.40€
A blend of Mourvèdre and Syrah with a little Grenache and Carignan. It spends twelve months in wood and then the second winter in vat. A lovely understated nose, but richer and more concentrated on the palate. Some hints of oak. Quite solid and rounded with good fruit. Would benefit from decanting.

2008 Grand Vin
2008 was a later vintage, and the Carignan was picked at the beginning of October. They escaped the hail that crossed the region just before the harvest. Quite a deep colour; quite ripe, with black fruit, very young’; very satisfying mouth feel. Lots of nuances and potential. Altogether very satisfying. Cyril is convinced of the ageing potential of St. Chinian, but not if it is made with carbonic maceration.

To my mind Domaine Madura deserves a much greater recognition and acknowledgement. Why do they not have an importer in the UK?
Email Post

Val said…
Rosemary - I love the way you write about the wines of Languedoc. I will have to see if I can get my hands on these wines here. I found an importer who has Chateau Haut Gleon, so maybe she'll be able to get this.
14 September 2011 at 14:51

AlanM said…
I visited St Chinian during the summer and was surprised at the variety of wines from the area, the different soils no doubt is a major contributor to that as you say. On the advice of Jeff Coutelou I bought wines from Pelletier and Navarre both from different communes and very much like both of them. I will look out for Madura
15 September 2011 at 16:40

Thanh Do said…
Nice to be your friends. Your blog contains useful information. Many thanks
24 September 2011 at 02:40

Rosemary George MW said…
Many thanks for your encouragement - much appreciated.
1 October 2011 at 11:29