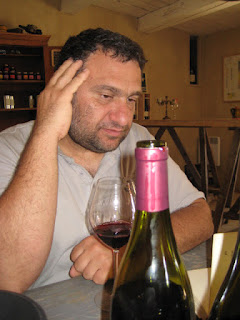 I’ve been meaning to write about Pierre Quinonero at Domaine de la Garance for a while now, as it is a little time since my visit. He has seven hectares outside the village of Caux, planted with Carignan, Syrah, Grenache Noir, Chardonnay, Ugni Blanc, Grenache Gris and Pinot Noir, on four different soils, limestone, clay and limestone, basalt and villefranchien.

Some wine growers have the same profile as their wines – is this the equivalent of dogs looking like their owners? Pierre Quinonero is a stocky, well built guy with a friendly smile, and his wines do have a solid chunky character about them. And he is a mine of information, so tasting with him was great fun. He explained how garance is the plant which provides purple dye – his vineyard of Ugni Blanc was covered with it – and hence the name of this estate. Most of his wines take their name from local legends and stories of the Languedoc. And for somebody born and bred in the warm south, he admitted that he does not like the heat, and wants to retire to either Scotland or North Yorkshire! Indeed he greatly regretted that he has never had the opportunity to play rugby in either place.

2008 les Armières, Coteaux du Languedoc The Armières were witches or sorcières.
90% Carignan and 10% Syrah with a three month cuvaison, malo on the skins, and 24 months in wood without any racking. 14º Deep colour. Quite solidly oaky on the nose, and on the palate a firm tannic streak, with ripe fruit and notes of chocolate and liqueur cherries. Ripe and powerful, and still very young.

2000 les Armières, Vin de Pays de l’Hérault - 20.00€
Again 90% Carignan and 10% Syrah. That is the way the vines were planted in the vineyard. But the wine is vin de pays rather than an appellation, as ten years ago Pierre had more vineyards, and more Carignan, and consequently too much Carignan for the appellation. It’s the percentage in the vineyard that matters rather than the percentage in the wine.

The colour was obviously less intense than the 2008, and the wine was more elegant. Pierre commented that 2000 was a quite a fresh year, with some rain, whereas 2008 was warmer, so that the wines had more substance. There was some dry cassis fruit as well as some firm tannins and a leathery note, with quite an elegant finish. The wine was still quite youthful.

Pierre has some ten vintages on sales – observing we vignerons have to do the work that the wine shops don’t do – it’s more elegant in French: on fait le travail que les cavistes ne font pas.


2010 Pinot Noir, Vin de France – 12€
This enjoys a two day cuvaison and then the grapes are pressed and the juice fermented in barrel with natural yeast. It is bottled the following February, after the malo-lactic fermentation. Think of it as as the Languedoc’s answer to Beaujolais, for it was certainly fresh and fruity, with notes of liqueur cherries, griottes, with some acidity. Pierre’s vineyard of Pinot Noir is grown on granite, up in a cooler part of the Languedoc at Colombiers-sur-Orb. The vineyard is just below the Caroux, so it enjoys cool evenings, making for a fresh style of wine, enhancing the côté mineral. And the grapes are picked a month later than in Caux.

He also has some Chardonnay in the same vineyard, which was planted in 2000. The style of wine he makes depends on the vintage. In the best years it is les Vargues, and in lighter years A Clara, who is his oldest daughter. The Vargues were the people who rode horses in the mines – a grandfather mined in Spain, and then in retirement worked in the vineyard.

2008 les Vargues, Vin de pays de l’Hérault, with eighteen months élevage.
Quite golden in colour. And intriguingly oaky on the nose, with layers of texture balanced with good acidity. There is 30% new oak; the wine undergoes a malo-lactic fermentation; there is regular bâttonage, but no racking, fining or filtering, or chilling. It is all very natural, and for Pierre an expression of Chardonnay from granite. He first made this cuvée in 2002, and subsequently in 2003, 2006 2007 and 2008, but there is none in 2009 or 2010.

2010 A Clara – 12€
This enjoys the same vinification, but only spends seven months in wood. I didn’t think the bottle I tasted was showing very well, so I won’t bore you with my tasting notes.

2009 Claviers Vin d Pays de l’Hérault– 20€
A blend of 60% Ugni Blanc, with 40% Grenache Gris and just a drop of Clairette. There is no chilling and only natural yeast. The juice is put straight into barriques and the wine given nine months in old wood. It was very intriguing. The colour was old gold and the nose was not very expressive. On the palate it was quite soft, with notes of hazelnuts, and rounded, with a bite on the finish.

And we finished with 2002 A Coline, Coteaux du Languedoc – 40€ and a heady 16º. It is pure Grenache Noir, grown on clay and limestone and harvested quite late. It had spent five years in old barrels, without any topping up. And the taste was very intriguing. There were some dry leathery notes on the nose, and one the palate it was concentrated and long with some firm cherry fruit. Definitely not mainstream, but an example of the unexpected flavours you can find in the Languedoc.

I enjoyed my afternoon with Pierre – he is passionately enthusiastic about his work, with a wonderfully original streak of creativity.
Email Post

Per and Britt, BKWine said…
Great producer. If I remember right, that's where we met for the first time, over a few bottles of wine. Some years back.

Thanks to you, Today's Wine Picture is of Domaine de la Garance.

Rosemary George MW said…
Absolutely - the coincidence was that you were with Anders who was the only Swedish journalist that I knew at the time, and I invited you back for a drink but you had a pressing engagement with a football match.....!
18 February 2012 at 18:58

Free Run Juice - Damien said…
It's ironic your post is so recent Rosemary; UK importer Richards Walford are offering a wide range of these wines to their customers (independent off-trade primarily) at up to a 33% discount. It looks as if they've been over-stocked for some time - UK readers might want to nudge their local independent into taking advantage.
3 March 2012 at 16:38