A DAY IN LIMOUX - DOMAINE DELMAS 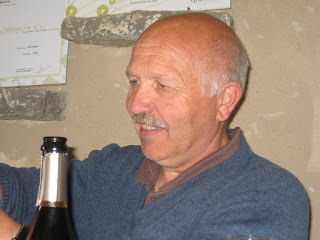 A brief tasting of Bernard Delmas' wines at the Maison du Languedoc in London encouraged further investigation – I was particularly keen to try his oak fermented wines - so earlier in the month, we drove to Limoux and further down the Aude valley past the little town of Couiza to turn into the hills towards Antugnac, in the Haute Vallée de l’Aude. M. Delmas has smart spacious cellar, built in 2000, on the outskirts of the village, with capacity for the 30 hectares of vineyards he has in Couiza and Esparaza, as well as Antugnac. He has 14 hectares of Chardonnay, 8 of Mauzac, 6 of Pinot Noir and 2 of Chenin Blanc. As well as several sparkling wines, he also makes Pinot Noir and white Limoux from Chardonnay. He explained that he was born in Antugnac; he had trained as a cook, while his father had three hectares of vines and made a bit of Blanquette. After working in various restaurants around France, he married his florist wife from the next village and they expanded the vineyards. 1976 was his first vintage and he has been organic since 1986. There is a neat little tasting caveau – on the Thursday before Easter it was sporting a display of chickens, eggs and Easter bunnies. And we settled down to tasting. 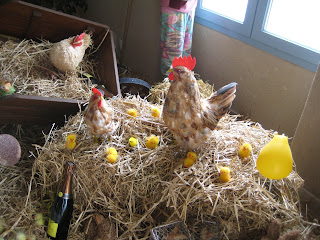 NV Cuvée Tradition Blanquette de Limoux - 8.00€ 90% Mauzac with 10% Chardonnay; disgorged a month or so ago. 6 gms/l dosage< Fine mousse. Soft rounded nose. Good acidity. Ligfhtly herbal notes. Good depth and elegantly creamy. Blanquette with its high proportion of Mauzac can sometimes be a little rustic, but not this.
NV Crémant de Limoux, Cuvée Passion – 9.20€
50% Chardonnay, 20% Mauzac and Chenin and 10% Pinot Noir. With about eighteen months on the lees. 12 months is the minimum for Crémant, and nine months for Blanquette. Quite rounded and rich on the nose, with a satisfying hint of yeast autolysis on the palate. Lightly nutty with good acidity. A touch of brioche and good length on the finish.
2008 Crémant de Limoux, Cuvée Audace – 17.50€
50% Chardonnay with 20% each of Mauzac and Chenin and 10% Pinot Noir, all fermented and aged in oak for eight months. Slightly deeper colour than the previous Crémant. Rounded and rich, with some appealing nutty notes. There is no doubt that the oak, which is beautifully integrated, adds some depth and character. As far as he knows. M. Delmas is the only producer in Limoux to ferment a wine entirely in oak. He uses the first juice out of the press and this 2008 was the first vintage with oak. I thought it was delicious.
2009 Blanquette de Limoux, Cuvée Mémoire – 15.45€
Again 90% Mauzac and 10% Chardonnay. Also vinified and aged in oak. Somehow the oak accentuates the difference between the Mauzac and the Crémant, giving more vinosity to the wine. Mauzac is quite a rustic unrefined grape and the oak enhances that character but in an appealing way. The nose was quite rich and rounded, with a full-bodied rich herbal palate and some soft acidity. Nicely satisfying and very intriguing. M. Delmas explained that his father used to ferment all his wine in wood, and that the practice has been somewhat lost. Eventually he would like to build up some vins de reserve, so that he can include some oaked wine in all his cuvées, but that is a long term project.
2008 Crémant de Limoux Cuvée des Sacres – 12.20
From Chardonnay, Chenin Blanc and Pinot Noir, but no Mauzac. No oak and no dosage, but more selection in the vineyard. Quite rounded and creamy on nose and palate, with good acidity and a satisfying depth of flavour. A little yeast autolysis. Very harmonious with some length. And our tasting finished with two vintages of Pinot Noir, IGP La Haute Vallée de l’Aude. M. Delmas has a long experience of Pinot Noir; his first vintage of this variety was 1977. And the very first Pinot Noir was planted in Antugnac in 1961, by the previous owners of the Château d’Antugnac.

2008 Pinot Noir– 8.00€
Medium colour. A closed nose, with a fresh but ripe raspberry fruit on the palate. Very elegant with some balancing acidity.
2009 Pinot Noir – 8.40€
Again quite a closed nose, but more liquorice than raspberry and more opulent fruit. Quite fresh perfumed fruit, with some elegant tannins. More rounded than 2009. The grapes are handpicked, sorted and destemmed and then punched down twice a day. There is a four to five day cold maceration, with a fermentation in vat and a twelve months élevage in barrel, on the fine lees, with a bâtonnage every two or three weeks. Yields are low, 35 hl/ha. You sense that M. Delmas is a thoughtful winemaker, responding carefully to the conditions of each vintage. And his oaked ‘effervescents’, as they call the sparkling wines of Limoux, were certainly worth the journey. 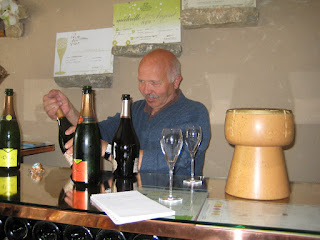