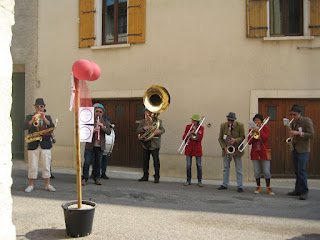 Montpeyroux is a picturesque little village at the foot of the Mont Baudile, with a growing number of committed and talented wine growers. One of the best ways to get the measure of the quality is at the open cellar day, an annual event on a Sunday in the middle of April. You can wander round the village with glass in hand, tasting old favourites and discovering new wines and catching up on the local news. There are now twenty growers, including the competent village cooperative.

I started off at Domaine de Grécaux. This estate used to belong to Alain Caujolle but he has moved on to pastures new near Lodève and his bulk of vineyards have been bought by Arnaud and Sophie Sandras. They have come back to France from Nouvelle Caledonie but Sophie does come from the Languedoc. They had their 2011 rosé to taste, quite a solid rounded vinous wine. Their reds were from 2009, Alain’s last vintage at Grécaux.

A friend had mentioned a new estate, Domaine Joncas. In fact Pascal Dalier has also bought some of Alain’s vines, eight hectares. He is planning two wines, one lighter and one more powerful and is gradually converting his vineyards to biodynamic viticulture. 2011 Joia, his first wine, was available for tasting. It comes mainly from early picked Grenache that had only reached a modest (for Grenache) 13⁰. It is kept part in vat, and part in an egg. It was rounded and perfumed with some lovely liqueur cherry fruit, with a ripe rounded finish, making for stunningly easy drinking. Pascal said he wanted he wanted something gouleyant, and he has certainly succeeded. He comes from Lorraine so wine is a career change from running a car showroom. And he said that he owed a lot to Alain Chabanon, referring to him as his ange gardien.

And that prompted me to taste Alain’s wines at Domaine Chabanon next. See an earlier posting for more details on the wines.

2008 Trélans,
Quite leafy herbal fruit, with some dry honey. Intriguing and long

2010 Campredon. As always, absolutely delicious, ripe and perfumed, quite a rounded palate with a satisfying leathery note.

Next a look at Villa Dondona with André Suquet

I was hoping for a preview of their 2011 white, but it is not yet bottled. André said that it is more aromatic than the 2010 with more Vermentino and less Grenache Blanc.

2010 Dondona – 10.50€
To emphasis the difference from Oppidum, they had picked earlier, and given the wine less extraction. 20% Grenache and 40% Syrah and Mourvèdre. Quite ripe rounded fruit and a perfumed nose. Medium weight palate. A touch of tapenade and some good fruit.

2009 Oppidum – 60% Mourvèdre, 40% Syrah.
Quite a rich tapenade nose. Again, quite rich with some oak on the palate. Rounded, perfumed and supple. More body than Dondona.

2010 Chemin des Cayrades – a pure Carignan and new to me. Aged in vat. With 50% carbonic maceration. An attractive cherry perfume on the palate. Some tannin and acidity and that appealing rusticity of Carignan with a fresh cherry note. 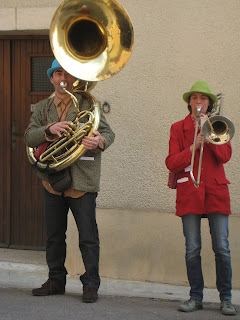 I then wandered down the street and found my friend Amélie, from Mas D’Amile. At that point the village band came past and made any conversation totally impossible. When peace was restored, Amélie said that she had found 25 ares of old Terret Bourret vines, so that she would be able to make some white wine in 2012. She is also looking for some Syrah and Grenache to go with her Carignan so that she will be able to make appellation Montpeyroux. For the moment her Carignan is a vin de pays.

2010 Carignan, Mont Baudile. Quite solid, rounded fruit, with a rustic note. Nice texture. Quite young and chunky on the palate.

And a nice comparison with the 2009, which was a little more mature, and elegant, with some appealing rustic fruit. I do like Amélie’s Carignan.

Further down the street is Sylvain Fadat’s cellar at Domaine d'Aupilhac. This was definitely worth a visit with four tables of goodies. First whites and rosés with

2011 Lou Maset rosé. Half pressed and half bled. Cinsaut and Mourvèdre 7.40€
Fresh acidity; quite crisp and rounded with a herbal note.

2010 Lou Maset red.
Young red colour. Ripe fruit on the nose. And on the palate nice rounded fruit with a touch of tannin. Very Montpeyroux.

2010 Le Carignan – 17.00€
Quite solid, dense ripe nose and palate. The appealing rustic notes of Carignan with some black cherry fruit and a streak of tannin.

2009 La Boda – 25.20€ the blend of two terroirs, Syrah from Cocalières, with north aspect and Mourvèdre from the south. Whole bunches in demi-muids, and kept in barrel for two years. Quite sold ripe and rounded, tapenade notes, a touch of oak and still very youthful, with potential.

2009 le Clos – 38.00€
Quite solid firm leathery fruit on the nose. And leathery notes with ripe fruit on the palate. Quite sturdy and very youthful. A certain freshness to balance the ripe fruit. The first vintage of this particular wine since 2000. Whole bunches fermented in demi-muids and then given two and a half years élevage.

And then Sylvain had generously opened some older vintages: A treat not to be missed.

2004 Le Carignan
Quite firm leathery notes Quite dry, with a touch of nay on the palate. Quite a supple mature finish.

2004 Montpeyroux
Medium colour. Quite dry leathery notes on the nose and palate, with some underlying elegance and a dry finish.

2003 Authentique, blend of Carignan and Mourvèdre that was only made in 2003. Firm nose. Quite a sturdy palate, with ripe fruit and leathery note. Very intriguing.

1999 les Plôs de Baumes, Gorges de l’Herault.
Apologies, I never found out the grape variety blend. Quite a developed colour; elegant leathery on the nose. Quite cedary with some mature fruit. Quite rich and very intriguing and a lovely example of a mature Midi. 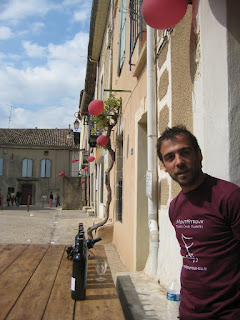 There was a new estate in the square by the old covered market, L’Escarpolette. Mark Andrew at Roberson’s had told me to look out for Ivo Ferreira, and how right he was. Ivo describes himself as a vigneron funanbule – a tightrope walker. However, tasting in the street, especially on an increasingly chilly morning, is never ideal so I realise now that my tasting notes are really lacking in detail. The wines definitely deserve further consideration, so I’ve negotiated a cellar visit in due course. 2009 was Ivo’s first vintage in Montpeyroux and from five hectares near the village of Arboras, he makes five red wines, one white and a liquoreux. All Ivo’s wines are vin de table.

2011 l’Escarpolette en blanc a blend of Muscat and Macabeo – 19.99€
Vinified like a red wine on the skins. An orange wine. Still some fermentation aromas on the nose, but a very intriguing palate, with dry nutty fruit and good acidity.

2010 Jeux de mains – 22.00€
Cinsaut aged in seven or eight year old demi-muids. Quite solid oak, with some chocolate notes, and on the palate a touch of coconut. Firm fruit but with a fresh streak on the finish.

2010 L’Escarpolette – 17.00€
Bright colour. Firm dry nose. Quite a dry leathery palate, with firm tannins and a dry finish. Quite intriguing. A blend of Cinsaut and Carignan, 60 year old vines, maceration carbonic, but the wine did not have the overtly fruity taste that you sometimes get with carbonic maceration.

2010 Les Vieilles – 22.00€
From 60 year old Carignan grown near Arboras. Very bright colour. Quite firm fresh fruit on the nose, with fresh cherry notes on the palate. Medium weight. Quite intriguing.

2010 l’Enchanteur
A pure Merlot, vines in St. Jean de Fos. Quite solid and dense, with chocolate notes on the nose. Again a solid ripe rounded palate. Quite full-bodied with lots of character. 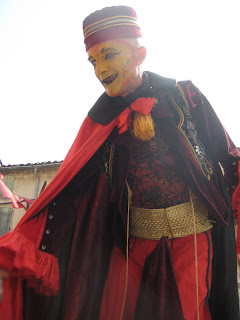 Across the square I encountered Christopher Johnson-Gilbert with Virgile Joly. Virgile’s vineyards are in St. Saturnin so he was an interloper, giving Christopher a hand. So a chance to taste Christopher’s first red wine, 2009 Domaine Cinq Vents. 18.00€ The label has a dramatic owl painted by Elizabeth Frink, who was a distant relation by marriage. 60% of the wine has been in oak for twelve months, mainly new French oak from different coopers. The wine was quite perfumed on the nose, with a hint of orange, rounded and ripe with some firm tannins, still very youthful, with a dry finish. It has only just been bottled and promises well for a first vintage. Christopher observed that the 2010 was fruitier.

Then I walked briskly through the back streets of the village to find Domaine l’Aiguelière. It has been a while since I’ve tasted their wines.

2010 Grenat, as you might expect from the name 90% Grenache, with 10% Syrah. Young bright colour. Ripe fruit. Ripe liqueur cherries. Quite ripe and warm.

2006 Tradition – in vat. Quite solid firm and intense with some leathery fruit.

2006 Tradition fût de chêne. Quite solid dense ripe oak on nose and palate. Notes of tapenade. Richer and fuller but I preferred the unoaked wine.

2006 la Séranne. A blend of Mourvèdre, Carignan and Grenache, aged in vat.
Rounded, balanced and harmonious with a leathery note.

2005 Les Marnes bleues 80% Mourvèdre and 20% Grenache, again in vat.
Quite a firm leathery nose with a warm mature palate, with some ripe fruit and quite a sturdy streak of tannin. Quite mouth filling.

2002 l’Yeuse noire
40% Mourvèdre, with Carignan Grenache and Syrah. The Mourvèdre and Syrah were aged n wood. Quite a sturdy nose and palate. Quite firm and rounded; quite dense and tannic, even though it is ten years old. It shows that wines from the Languedoc can and do age.

There were other estates to taste, but time and energy had run out and it was starting to rain, with a chilly wind. But none the less a fun and worthwhile morning. 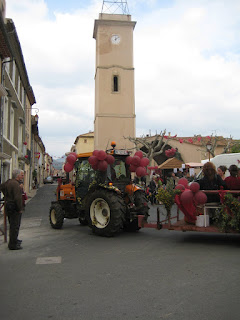 AlanM said…
I am so jealous. Montpeyroux really excites me, along with wines from Faugeres and Pic St Loup it is a name that I look out for with admirable consistency across a number of estates.
Whilst I was in the village over Easter I saw the adverts for the open day on the 15th and groaned loudly, missing out again. Roll on retirement and being based in the region.
23 April 2012 at 20:25

AlanM said…
And I have tried to get to visit St Andrieu twice without success. Does he accept visitors do you know Rosemary?
23 April 2012 at 20:26

Rosemary George MW said…
I am not sure if Charles Giner is still actively involved - he was not to be seen last Sunday - but I don't see why you shouldn't be able to get an appointment with his son.
24 April 2012 at 17:26

ivo de l'escarpolette said…
thank you for the tasting comments and I'm waiting you in my cellar!
or perhaps in may at the: http://therealwinefair.com/

it was a pleasure!

Pascal Domaine du Joncas said…
Thanks for your interest and comments
See you to taste Òbra (my next wine) during his élevage
Best regards
4 May 2012 at 19:43