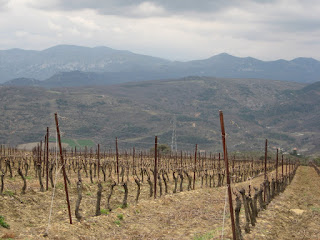 I had another reason to visit Antugnac, namely the wines of the Château d’Antugnac. Various people had mentioned them to me and I had tasted them some years ago at Vinisud. So it was definitely the moment for further investigation. The property was bought by two Burgundians, Christian Collovray and Jean-Luc Terrier, in 1997 and these days it is David Serrodes who runs the estate and makes the wine.
First he took us for a drive through the vineyards. This is Limoux countryside at its best, the cooler landscape of the Haute Vallée de l’Aude, with vines at 330 metres, going as high as 500 metres. They now have 93 hectares, which makes them the largest private cellar in Limoux. The oldest vines go back to the late 1960s, a vineyard of Chardonnay. Cabernet and Pinot Noir followed soon afterwards. Essentially the soil is clay and limestone; clay gives you fruit, and clay, what David called droiture. He comes from Nimes and studied in Montpellier, but has taken on the Burgundian attitudes of the owners. They take time over the élevage of the wines; you mustn’t be in a hurry. Some of the vines are planted very close together, with 10,000 vines; others have wider rows to accommodate a farm standard tractor. Chardonnay is their principal grape variety, with Merlot, Pinot Noir, Sauvignon and Cabernet Franc. And they are converting to organic viticulture. 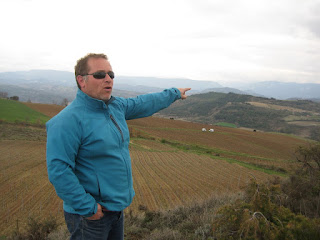 The cellars are spacious and well run. There is a sorting table, and as they have lots of different plots, there are stainless vats of different sizes, and also some large cement vats. The barrel cellar is neat, with that evocative aroma. Blind-folded you could only be in a wine cellar.
And then we tasted; David explained that that for vin de pays they must use the term domaine, whereas for an appellation château is permitted.
2011 Les Grand Penchants, Haute Vallée de l’Aude, Chardonnay – 7.40€
This was fermented in two horizontal tanks, 1.40 metres high by 3 metres wide, to facilitate bâtonnage, and bottled at the end of March. All the wine did its malo. Light golden colour; lightly buttery nose; a touch musqué – David has explained that they had used some of the Chardonnay musqué clones from the Maconnais, which although they are definitely Chardonnay, do have just a hint of a Muscat aroma. There was a note of honey too, with some fresh acidity balancing the ripeness on the palate. No oak and a nice long finish.
2010 Château d’Antugnac, Terres Amoureuses. AC Limoux – 10€
85% Chardonnay with 15% Mauzac. Fermented and aged in oak. 10% new. Blended before bottling, as there is a month’s difference in the ripening time of Chardonnay and Mauzac, between 15th September and 15th October.
Light golden; light leesy nose. Quite rich and buttery. Quite broad with a hint of acidity. Quite textured. There was something quite Burgundian about it, even though as David observed ‘we don’t have the minerality of the Maconnais’.

2010 Château d’Antugnac, Chardonnay, las Gravas, Limoux - 15€
25-30% new wood, Burgundian pièces of 228 litres rather than bordelais barriques. They have experimented with some larger tonneaux of 300 litres. The appellation decree originally specified a maximum of 300 litres, but no longer.
Very golden colour. Quite firm structured nose; tight knit and leesy. Good acidity on the palate. More mineral and more oak, but integrated oak, with a rich leesy malo-lactic note. Good matière. A rich textured mouthful of wine; well-made but a bit too heavy for my taste buds, given that my favourite Chardonnay is Chablis.

And now for some Pinot Noir. David explained that they determine the harvest date according to the taste and visual appearance of the grapes. The alcohol level is around 12.5˚ - 13˚ and above all they want to show each variety at its best. 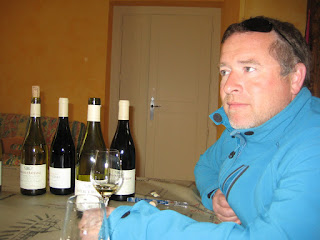 2011 Domaine d’Antugnac, Pinot Noir Haute Vallée de l’Aude – 6.70€
40- 50% élevage in wood, 10% new, with some punching down or pigeage. Medium colour. Fresh nose with raspberry fruit and a touch of oak. Quite dry fruit; elegant raspberries with a touch of oak. The vines are still quite young. And above all they want is drinkability, and I think they have certainly achieved that.
2010 Domaine d’Antugnac, Côté Pierre Lys, IGP Haute Vallée de l’Aude. – 10.00€
10 months of élevage in pièces for all the wine.
Medium colour. Quite rounded, quite closed nose with a touch of oak. Quite ripe silky tannins on the palate, with a certain amount of body. Good depth and length. Some acidity and tannin, balanced with some fresh raspberry fruit. David observed that it was difficult to control acidity and tannin, but I think he managed pretty well with this wine. He then mentioned that there are now 2000 hectares of Pinot Noir in the Languedoc; back in 2002 there were 80 hectares, of which they had 8.

2009 Château d’Antugnac, Limoux Aux Bons Hommes – 8.40€
Why the name? David explained that Bons Hommes was another name for the Cathars, the heretics of the 12th century, and that there is a Cathar tower nearby. The wine is a blend of 70% Merlot with 20% Cabernet Franc and 10% Syrah. The blending is done before élevage and 10% of the wine is given a long élevage in wood. David talked of une vinification integrale whereby whole grapes are put into new wood.
Quite a fresh nose, with some dry cassis, and on the palate. A balance of acidy, tannin and red fruit, with an attractive fresh finish. Nicely balanced and elegant. And amply illustrating Limoux’s success with still wine. Even so, still wine only accounts for about 12% of the production of the appellation. Limoux for most people equals fizz. 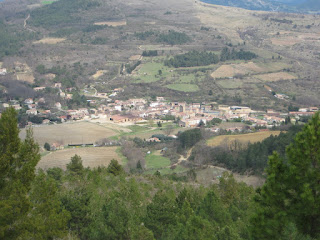 Per and Britt, BKWine said…
Quite some time since I tasted their wines but I have very good memories of their wines. Beautiful landscape, far from everything.

Rosemary George MW said…
You obviously had better weather than me! And as you say, the countryside is wonderful.
4 May 2012 at 15:47