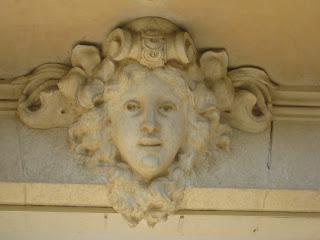 I had heard that Philippine de Rothschild had bought vineyards in Limoux, and had even tasted a couple of vintages a few years ago. And then suddenly I had a spare morning in Limoux and the opportunity for a cellar visit with Vincent Montigaud, who runs the Domaine de Baron Arques. He moved to Limoux from Bordeaux in 2001, so that he has played a significant part in the development of the estate.

Vincent explained that Philippine had bought the property with her two sons back in 1998 – the estate had originally been known as Domaine Lambert and comprises 47 hectares near the village of St Polycarpe. The domaine dates back to the 17th century and there is a château that was built at the end of the 19th century, in what Vincent called le style Biarritz. The vineyards had been much neglected, so many were pulled up and replanted. I was intrigued by the Rothschild interest in Limoux. Vincent explained that their am was to make a great red wine, like Opus I in California or Almaviva in Chile. And why Limoux? They wanted to play a part in the redémarrage of the Languedoc; there is some great terroir in the Languedoc, which needs to be mis en valeur. Limoux was not known for its reds; that appellation was only created in 2003, and yet the potential is enormous, situated as it is on the climatic crossroads of the Atlantic and the Pyrenees, with the advantage of relatively high altitudes and cool vineyards. Nearby Malepère and Cabardès produce convincing wines from both Mediterranean and Bordeaux varieties, which distinguish them from the rest of the Languedoc, so why not Limoux too? Initially they formed a company with the Limoux Coop, le Sieur d’Arques, to give themselves time to learn about Limoux, and in 2003 it was time to go it alone, so the connection was terminated as the brand name Baron Arques became Domaine de Baron Arques, with a first vintage in 2003. 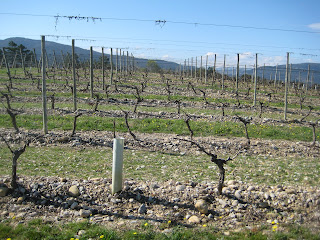 Vincent took us on a tour of the vineyards – there are some beautiful slopes, especially in the spring sunshine. The altitude is between 250 and 350 metres, and they are at the junction of three terroirs, Mediterranean, Antan and Haute Vallée. He explained how they pulled up Mauzac, Carignan, Chardonnay and Merlot, while keeping Syrah and some Merlot, and replanted more Merlot, as well as Cabernet Franc, Cabernet Sauvignon, Syrah, Malbec and Grenache, in other words the principal varieties of the appellation.  the oldest  vines were planted in 1974.   Usually their blend is approximately 50% Merlot, with 17% each of Cabernet Franc and Syrah, 11% Malbec, 3% Cabernet Sauvignon and 2 % Grenache, but of course there are vintage variations. Initially they made only red wine, but since 2009 they have produced a pure Chardonnay. They grafted Chardonnay on to Grenache, in the vineyards where it is too cool for Grenache, either by T-budding or a technique using two buds called en fente. The first seven years were years of restructuration, with wine that was sold off as vin de cépage, as they got to understand their vineyards.

There is some detailed work in the vineyard. The have planted some high density vineyards, with 7500 plants per hectare in deeper soil. They practice lutte raisonnée and have a weather station on the estate. Most of the pruning is simple or double guyot, with some long baguettes. They practice ebourgeonnage in order to spread out the bunches. There is effeuillage at the end of June, on the shady side of the vines, and then on the sunny side, just before the harvest, to provide better aeration and avoid the development of botrytis. And they will do a green harvest if necessary. 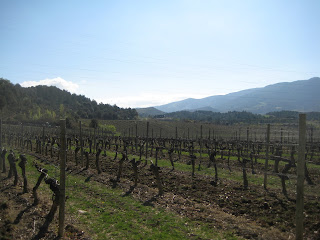 Vincent described the work as adapting the savoir faire of Mouton Rothschild to the character of the Languedoc. There are some bordelais practices that might work in the Languedoc, and others that do not. In Bordeaux there has been a trend towards higher vines, but that is unnecessary in the Languedoc. They leave grass between every other row and switch the rows every three or four years. There is an attention to detail in the cellar too, with a table de trie, destemming of the grapes and work by gravity. They are guided by tasting, assessing the ripeness of tannins, skins and pips, as they are at Mouton. The cellar is neat, with thermo-regulated stainless steel vats of several different sizes, as well as concrete vats. Vincent remembered the earth floor and the old foudres of the previous owners.

The harvest usually takes place between about 25th September and 25th October. They do a pre-fermentation cold maceration for 24 – 48 hours. The alcoholic fermentation does not reach too high a temperature, a maximum of 29˚ - 30˚C and then they drop the temperature down to 25 - 26˚C.   They don’t want to extract excessive tannins, so the maceration time depends on the grape variety, and is determined by tasting. It is usually longer,  two to three weeks,  for Merlot, Cabernet Franc and Cabernet Sauvignon, and shorter, about ten days, for Syrah, Grenache and Malbec. Their objective is to preserve the fruit. The malo usually takes place in tank, though they are experimenting with malo in barrel. They begin blending in mid-December and finalise the blend in early January before putting the wine into barriques, for six months for the second wine, La Capitelle and 12 months for the Grand Vin. They use 25% new wood for the Grand Vin, and one year old barrels for the second wine. There is some serious selection in the cellar. They only bottle two thirds of their production, either as the Grand Vin or as Capitelle, with the bulk of the wine going into a vin de cépages range that is marketed from Bordeaux. 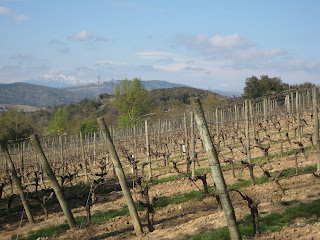 And now for some tasting – impeccably organised, with bordelais efficiency, tasting sheet and a glass for each wine - In the main salon of the chateau.

2008 la Capitelle du Domaine Baron Arques
Good young colour. Elegant oak on nose and palate. Some delicate vanilla notes. Some supple tannins and some dry spicy fruit on the palate. The nose was more bordelais, with some elegant Mediterranean spice on the palate. Capitelle has more Syrah than the Grand Vin, so seems more Mediterranean. Nice balance. A late harvest, from 6th – 29th October, following quite a cool summer.

2009 La Capitelle – 16€
Deeper young colour. More intense, more cassis on the nose. Quite firm peppery fruit on the palate. Youthful and tight knit initially, developing quite rounded spicy fruit. Good length and balance. This vintage has less Merlot and more Syrah than the 2008 and seemed more flattering on the palate.

And then onto a mini vertical of the Grand Vin

2003: Quite a deep young colour, with a little development. Quite a warm nose, some vegetal notes and a touch of chocolate. Quite rounded, raisiny and ripe on the palate. Almost a touch port-like. This was the year of the heat wave, and the wine has less acidity than some vintages. There were some leathery tannins, with an animal note on the palate, which was quite evolved with a certain warmth. Quite a long finish. Harvest from 15th September to 31st October. 14.5˚

2006: Picking started on 26th September. No Grenache in the blend and they are increasing the amount of Cabernet Franc, finding that it performs well, on limestone, and also appreciates the big difference between day and night time temperatures. Medium colour. Quite a firm nose; quite sturdy. Some firm cedary notes on the palate, as well as a touch of pepper. Quite firm tannins. Needs more time in bottle. The summer was hot with temperatures reaching 35˚C at the end of July.

2007: This was the vintage with the highest proportion of Cabernet Franc. Medium young colour. Quite an elegant cassis nose. More supple tannins. Good structure and fruit. Elegant, long and youthful. The harvest began on 2nd October. The 2007 shows a very definite leap in quality from 2006.

2008: No Grenache. Harvest began on 6th October. Medium young colour. Quite a rounded nose, not especially intense. Youthful cedary notes. Tighter more austere than 2007. Elegant tannins, and a certain freshness on the palate. Quite stylish with very good potential. Similar to 2007, but more restrained.

2009: - 30€
The highest percentage - 61%- of Merlot, and more Cabernet Sauvignon - 13% - than usual, as the vines get older. . Harvest began on 25th September. Deep young colour. Quite a ripe rounded nose and palate. Elegant with a very good balance of tannin and fruit. Silky tannins. Harmonious finish. And I was surprised to find that it was a heady 15˚. You certainly would not have thought so from the taste.

We then had a discussion about barrels; they use some of the same coopers as for Mouton, but for Limoux ask for medium chauffe, whereas for Mouton they want a higher chauffe. And here they rack less, every six months, as opposed to every three months, to add more gras to Limoux. 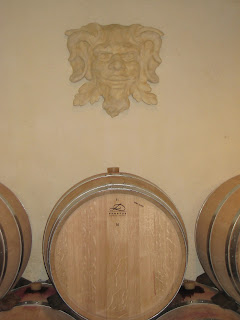 2010 Chardonnay – 32€.
Their second vintage. The Chardonnay is fermented and aged in wood for eight to nine months. The barrels are half new and half one year old. Just over half - 54% - is pressed immediately, and the rest given twelve hours of skin contact. 24% underwent a malo-lactic fermentation. Quite a rich leesy nose with some oak, and on the palate with good acidity and satisfying texture. A certain weight from the malo. The oak is well integrated and the palate rich and rounded. Vincent said that for 2011 they gave it less malo in order to increase the tension in the wine.

As for projects for the future; they want to continue to develop the Chardonnay, and also have a plan for a large barrel cellar – currently their barrels are scattered in various small cellars. But they are not tempted by sparkling wine, nor by Pinot Noir. I have to admit that the wines were a revelation. I have always been rather critical of the fact that Pinot Noir is not included in the appellation of Limoux – Limoux is after all one of the coolest parts of the Languedoc – but certainly the wines of Baron Arques showed that the climate also suits the Bordelais varieties.

angelosam123 said…
Wow, nice blog, it is really helpful for me. I have scribed the blog to get blog updates. Looking for more information on the same. thanks