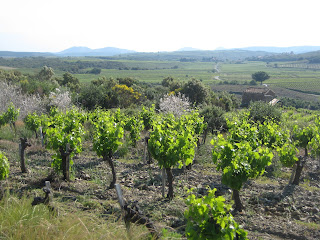 The appellation of Faugères is celebrating its 30th birthday this year, so over the last couple of weeks or so there have been various festivities, tastings and dinners.

We were invited to a dinner at the Auberge de l’Abbaye in the village of Villemagne l’Argentière.  A friend was lending a hand in the kitchen, as the sous-chef; he more modestly described himself as the kitchen boy.  And the theme was Cru et Cuit, in other words, a raw and a cooked version of the various ingredients in each course.  It was very imaginative and delicious.  And there were wines from two estates to accompany the menu. Domaine des Fusionels and Domaine Binet-Jacquet.

Let me make you hungry.  The entrée was a verrine of vegetables, peas and salad leaves, with some fresh goat’s cheese, and a scattering of edible flowers.   And the cooked version was a croquette of spring vegetables.

For the fish course, we had sea bream tartare, with ginger, mango and herbs, and alongside it a cooked filet, with chutney of citrus fruit. Veal was the theme of the main course, as a tartare, with red onions and lemon juice, and as a casserole with some red onions and white wine.  And pudding was strawberries, fresh with panna cotta, accompanied by an éclair with strawberry cream in the middle.

Sadly we were not numerous enough to warrant the presence of the wine growers, but I did get to chat to Pierre Jacquet as he dropped his wines off before dinner.  He explained that his first vintage was 2005 and he and his partner,  M. Binet, who lives in Switzerland,  have been developing their vineyards since 1995.  They now make three red wines, Tradition, Réserve and Grande Réserve.  We got to drink the 2010 Tradition and the 2009 Réserve.  I really enjoyed the Tradition with its lovely fresh fruit and spice and some youthful tannins, while the Réserve was still quite oaky, but promised well.  I am definitely planning a cellar visit.

I’ve blogged about les Fusionels before.  We were served their 2010 rosé, which was dominated by ripe strawberry fruit and acidity, which gave it a rather boiled sweet finish.   Much more satisfying was their 2007 l’Intemporelle from one third each of Syrah, Mourvèdre and Grenache.  It was nicely evolved with rounded ripe fruit and supple tannins.  Beautifully balanced and evolved.

A fun evening, but the wines seem to take very much second place to the food, and were not always really the ideal accompaniment.   As it was Faugères’ birthday party, I thought more of fuss should have been made of Faugères. 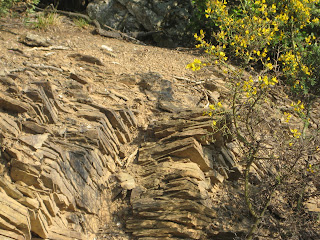 Another friend suggested a balade vigneronne with Pierre Roque and Brigitte Chevalier from Domaine de Cebene, with the idea of looking at the schist in Brigitte’s vineyards and then tasting the wines back in her cellar, to see whether we could discern the impact of the schist on the flavours.  It was an interesting idea and Pierre talked very knowledgeably and enthusiastically.    We looked at Brigitte’s recently purchased vineyard of old Carignan – she doesn’t know exactly how old – the papers said ‘planted before 1950’ and there were some wonderfully gnarled twisted vines.  The birdsong was almost deafening and there were wild flowers galore and brilliant yellow broom brightened up the vegetation of the garrigues.  Pierre explained that the schist of Faugères is 350 million years old, squeezed between the Pyrenees and the Massif Central.   It is metamorphic rock, originally clay, which is hard and compact.  The layers between the schist are important, but that is where the roots, water and organic matter filter between the layers.    Usually they are in vertical or sloping layers, allowing for the roots to travel down deep.   There is also a patch of limestone in Faugères, where there are no vines.  And then we looked at a second vineyard, les Bancels, which means terraces in Occitan, with the vines facing north and north west and north east, but not south, planted in terraces around a rocky outcrop.   Brigitte’s tiny cellar is in the village of Caussiniojuls, which means la petite montagne  qui dansent dans les nuages –and there we adjourned for some tasting. 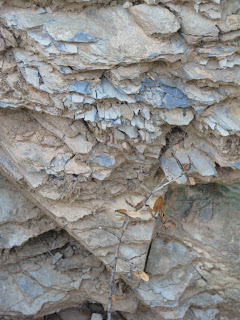 Apparently schist accounts for 10% of the world’s vineyards  and is one of the most distinctive of soils.
We started with a wine that does not come from schist – 2010 Ex Arena – made mainly from old Grenache, grown on villefranchien soil in the nearby village of Corneilhan, which is outside the appellation of Faugères .   It was delicious, with very perfumed spice on the palate and nose, reminiscent of fresh cherries.  A lovely balance. With red fruit, freshness and elegance.   The 2011 Ex Arena was a vat sample with ripe spice, and lots of fruit, but still the edges of a young wine.

Next we went on to Brigitte’s first vintage from the Carignan vineyard, 2011 Belle Lurette.  The expression il y a une belle lurette, means ‘a long time ago’.  Very ripe nose with red fruit and a certain stony minerality with some quite tight tannins.   This was grown on schist and it had a minerality that the Ex Arena did not have – was this a result of the different terroir, or the different grape variety, or both?   Carignan is a more structured  gr ape variety than Grenache.  Pierre described Carignan as having ripe cherry fruit, but with an acidulé note. 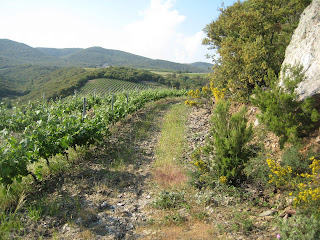 Next we looked at Les Bancels, a blend of Syrah and Grenache.  The 2011 was fresh and stony, with peppery spicy notes from the Syrah, and some red fruit.  Note this Syrah is grown on cooler slopes.  It too had a firm minerality.  The 2010 les Bancels was richer and riper, a touch alcoholic on the finish, and again a comparable stony mineral note, and 2009 les Bancels from a hotter year, was broader and riper and more mouth filling, with quite firm tannins  Brigitte called 2011 une année féerique.

Her third cuvée is Felgaria, 2010, a selection of the best plots.  Mourvèdre dominates the blend, and Pierre said that he thought Mourvèdre on schist was le couple de l’avenir, the pairing with a great future.  Stony fruit on the nose, with firm tannins on the palate, as well as acidity giving freshness,  and some lovely fruit.  Pierre observed that Mourvèdre is quite virile and the schist brings out the flavours of the Mourvèdre, while the Mourvèdre gives tannin to the wine.    2011 Felgaria in barrel, just the Syrah component,  was peppery on ripe with perfumed fruit and supple tannins.  It promises very well.   And with the wines came a selection of local charcuterie, including a bougnette de Lacaune, which was new to me,  It comes from pork, both meat and fat, bread crumbs and some herbs.

We could have gone on to another birthday party in Laurens,  where various growers were showing their wines, with food and music, but I am sorry to admit that our energy levels failed. 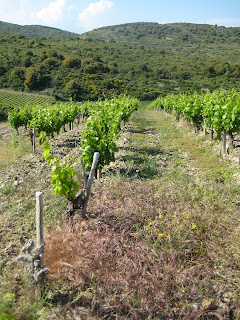 AlanM said…
Brigitte is a talented winemaker. I have a nice selection of her wines and look forward to the Carignan, which shares a name with my favourite village restaurant
11 June 2012 at 18:54