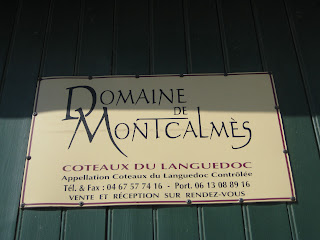 Domaine de Montcalmès is a classic example of the new generation of wine growers in the Languedoc.     I’ve drunk their wines on occasions at the Mimosa in St. Guiraud on the recommendation of David Pugh and went for a cellar visit a few years ago.  And so it was time to go back.  A brother and sister run the estate, Frédéric and Murielle Pourtalié, with Guillaume Goujon helping in the cellar.  It was Guillaume who welcomed us.   Their cellar is in the village of Puéchabon, near Aniane, and the name Montcalmès comes from a nearby hamlet.

Until 1999 all the grapes went to the coop, in several surrounding villages, but Frédéric wanted to make his own wine.   He gained experience with various growers such as Alain Graillot in Crozes-Hermitage and closer to home, with Laurent Vailhé at La Grange des Pères in Aniane.  His first vintage was 1999, from 22 hectares of vines. He has replanted three hectares and now has a total of 25.  They are mostly in the commune of Puéchabon but also in St. Saturnin, St. Jean de Fos, Viols le Fort and Aniane, with about ten plots all together, and with quite a variety of different soils, with limestone, and galets roulées.  They are gradually converting to organic viticulture, beginning this year, so that 2015 will be their first fully organic vintage.  However, as Guillaume explained, their treatments were already bio, using only copper and sulphur, but it will entail a lot more work in the vineyard.  They now have an intercep to deal with the weeds within the rows of vines and they do some green harvesting, and try to maintain a good aeration of the vine shoots.  And the moon needs to be taken into consideration, especially when blending. 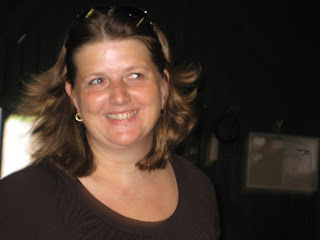 First we tasted from barrel – rather as you do in a Burgundy wine grower’s cellar.

2011 Languedoc Blanc
Equals parts of Marsanne and Roussanne, already blended in July 2012.  Will be bottled in 2013.  They usually buy second hand barrels as they do not like new wood, usually from Laurent Vailhé, and also Domaine Joblot in Burgundy.
Light golden; herbal leesy nose. Quite rounded and leesy texture. Rounded ripe and rich.  Flavours of white blossom with lots of nuances.  Some citrus notes.  Harmonious with great  length.  They don’t block the malo.  The vines face west, on clay and limestone.  It will be a lovely glass of wine.

2010 Grenache
They will blend their 2010 reds after the 2012 harvest and bottle in February 2013, so there were examples of single varieties to taste.   This comes from Aniane, grown on galets roulées, so an immediate comparison with Châteauneuf du Pape.  Good colour.  Lovely ripe spicy,  liqueur cherry nose.  Very Grenache, and elegant Grenache at that.  Grenache gives finesse to a wine,  and it needs longer in oak, in order to digest the tannins of the oak.

2010 Grenache, grown on calcaire lacustre in Puéchabon.  The vineyard was planted in 1983 -84.  Much deeper colour and much more concentrated and structured, with a spinal cord of tannins.  The same barrels, from François Frères.  Fruits noirs, especially blackberries.  Very long,  rich and concentrated.

2010 Syrah
Grown on galets roulées.  Quite tapenade; quite rich black fruits with some elegant, peppery notes.  The pepper develops in the glass,  Also some leathery notes, and lots of nuances. A ripe finish.

2010 Syrah
A different cuvee, grown in Puéchabon on calcaire lacustre.  Medium colour.  Much more elegant nose, more peppery and with quite a  peppery palate.  More structured with firm fruit.  Freshness and structure. 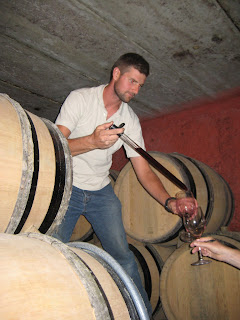 They get 20 hl/ha, a yield of 1.20 kilos per vine, with 5 – 6000 vines per hectares.  They use cordon royat pruning for Syrah, and gobelet for Grenache and Mourvèdre.  Gobelet works well on the galets as the grapes are nearer the soil and they absorb the reflected heat from the stones more easily.  And the soil under the galets is deep, which Mourvèdre appreciates.

2010 Mourvèdre
Grown on galets roulées.  Deep colour. Firm structured palate; some black fruit.   The scents of the garrigues. Quite firm tannins initially that soften.  Gentle vinification; initially it is very fruity, and then tannic and then it becomes more delicate, with ripe fruit and good tannin balance.

2011 Grenache on calcaire lacustre
Lightish red.  Perfumed fruit on the nose and a tannic steak on the palate.  Silky tannins and less acidity than 2010.

2011 Syrah – also on calcaire lacustre
Medium colour.  Some oak, but nice oak.  Attractive peppery notes.  Quite elegant ripe with peppery notes, a touch of black fruit on the finish.  Not yet absorbed any oak.  Guillaume explained that the ‘prise de bois’ took place after a  year and that the wine began to digest the oak after about eighteen months.  The oak regime is fairly similar for each variety, but they tend to use older barrels for Grenache.

2011 Mourvèdre on galets roulées
Quite deep colour. Quite rounded nose.  A certain structure on the palate, some viandé notes, with some fruit.  More alcoholic than the syrah..  Very gourmand, some cherry fruit with a tannic streak.

2010 Chardonnay, Pays de l’Herault.  16.00€
For this wine, they buy the grapes; pick them and vinify them themselves.  Grown on limestone, near St. Martin de Londre., where the climate is fresher, with cooler nights than around Puéchabon.  Aged in a demi-muids.  Elegantly buttery, and quite Burgundian style.  Maybe think St. Romain.

2010 Viognier IGP Hérault – 16.00€
Again from bought grapes.  Lightly peachy nose; rich textured plate. Rounded; enough acidity. Nuances of exotic fruit.  Vinified in and kept in old wood.   A big difference in night and day time temperatures not only adds freshness to the wine, but enhances the colour of the reds.

2009 Blanc, bottled January 2012 -  21.00€
Quite firm fruit on the nose.  And on the palate rich with buttery leesy fruit.  Rich and  rounded, with soft acidity and length.  Quite a full bodied finish.  A little bit too heavy for my taste buds. The Roussanne gives aroma and the Marsanne finesse.   2004 was the first vintage of their white wine, and 1999 for the red.

2009 Coteaux du Languedoc – 21.00€
60% Syrah with 20% Grenache and 20% Mourvèdre.
Young colour; quite a perfumed nose with spicy cherries.  Spicy fruit on the palate, with a certain tannic structure.  Youthful and peppery.  Lots of nuances.  Some stony mineral nose.  Medium weight.  2009 was quite a hot vintage, but they have manage to retain the freshness and minerality.  Definite ageing potential.  And a great visit.

By way of a postscript, for dinner the following evening,  we opened a bottle of 2005, that we had bought on our previous visit.     And it was drinking beautifully; lots of nuances of flavour and complexity.  One of the great wines of the Languedoc. 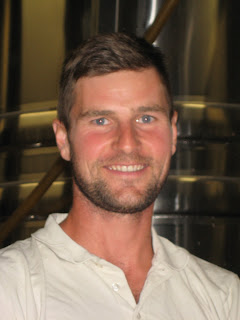 Guy P said…
Just want to say, since we've been to St Chinian we've returned every year (from Australia) and we're making our second trip back this year. If you're interested in wine try the La Croisade or megalith. They're both amazing. Can't wait to be back in October, it's like a second home to us now.
16 September 2012 at 09:54