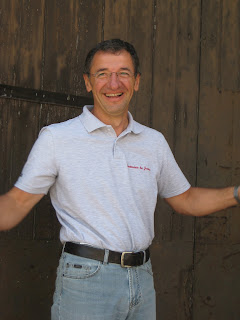 I  met Pascal Dallier at the Montpeyroux fête earlier this spring and had him earmarked for a cellar visit.   We went to his little cellar in Montpeyroux but since then he has just moved into a brand new cellar outside the village, just in time for the 2012 harvest.

Wine making is a complete career change for Pascal.  He was a car concessionaire in Nancy, the elegant city that is the capital of Lorraine, with four showrooms, 120 employees and 40 million € turnover, dealing with Jaguar, Landrover, Ford and Kia, – and then the opportunity came for him to sell up and follow his dream.   He arranged to work with Alain Chabanon, one of the leading wine growers of Montpeyroux, and now considers Alain to be his guardian angel.  He also did some short courses or stages on biodynamics, and acquired three hectares of vines, and then two more which are under restructuration – currently lying fallow after the vines have been pulled up.    He has sown various herbs and grasses.   And he has just bought another three hectares, so Domaine Joncas consists of a total of eight hectares altogether, in three plots.   Joncas is the name of a canyon by the Mont Baudile, and describes a place where gorse grows, ajonc being the French for gorse. 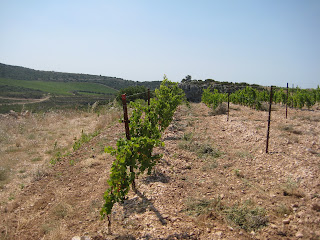 A conversation about land prices – in Pic St. Loup the cost is 25,000-30,000€ per hectare as opposed to 10-15,000€ in Montpeyroux.  Pascal looked from Sommières to St. Jean de Minervois and fell for Montpeyroux, observing that you do not find the precision and finesse of Montpeyroux in Pic St. Loup.

Pascal has a very clear idea of what he wants to make – j’ai une vision de ce que je veux faire.   And he described his stance as somewhere between la conscience et le courage.  Joia is his first cuvée and 2011 his very first wine – a blend of 60% Grenache and 40% Syrah.  Deep colour; rounded nose.  Quite gourmand, with quite sweet ripe fruit, but with a good backbone of supple tannins.  Attractive spicy fruit and for early drinking.  Three quarters of the wine is kept in a stainless steel vat, and the rest in a concrete egg, It is neither fined nor filtered.   The 2011 is 12€ and will be labelled Montpeyroux.  And it reminded me very much of Alain Chabanon’s Campredon, another of my favourite Montpeyroux.

Pascal’s second wine is O Bra, Terrasses du Larzac – 20.00€.  It is 60% Syrah and 40% Grenache, a selection of the best grapes, aged in three different containers, a stainless steel vat, a concrete egg and a 10 hectolitre  foudre.  Pascal is adamant that he is not tempted by new wood.  ‘I fight to get the best grapes possible’ and he does not want to deform them with élevage in a small barrel.  It changes the taste too much.

We tasted the three components:
First from vat:  Deep colour.  Fresh ripe spice on the nose.  Quite a fleshy palate; rounded with good spicy succulent fruit and a wild garrigue note.  Sunshine and garrigue. 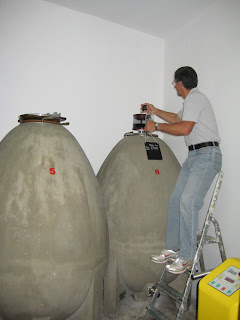 And finally the foudre, a new oval one, with no particular chauffe requested, made by Boutes in Narbonne.   Medium colour.  A touch of vanilla.  The oak brings out the spice, with more structure.  Less gouleyant than the stainless steel vat, with firmer tannins.  With the foudre Pascal is looking for some micro-oxygenation.  In contrast the wine from the vat becomes sweeter in the glass.

It was a fascinating exercise illustrating the effect of the container – there were definite differences, not dramatic, but perceptible none the less, that would add complexity to the final blend.    Pascal has already worked out his blend, just 2% from the vat; 45% from the egg and 53% from the foudre, so he made that up for us to taste.  Quite deep colour. Quite sweet, spicy ripe fruit with a mineral streak and a certain structure.  Very good fruit.  It promises to be a lovely glass of wine.

Pascal attaches great importance to his vineyards – the most important thing is produce un bel raisin, and he sorts the grapes in the vineyard at harvest.  He is planning to keep some plots organic, while transforming others into biodynamics to see what the difference is.  So after our tasting we went to look at a vineyard out of the village on the road to Arboras. It is a beautiful spot, wild and quite magical.  An electric fence keeps the wild boar out – and as well as red varieties, Pascal has some Grenache Gris and also some Riesling vines – Riesling is now allowed now in the Languedoc .  That promises well for a future white wine.  And a rosé, Nébla, will be made in 2012. . 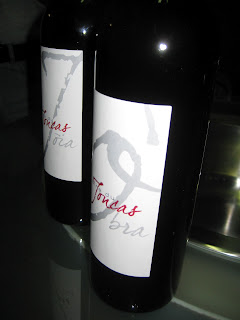