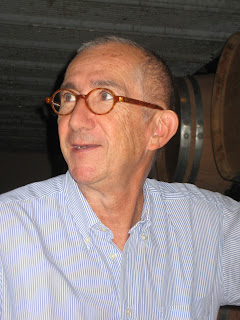 A chance encounter with Paul Lignères of Château la Baronne over lunch at Easter led to a cellar visit in the Corbières in September.    We met up in the village of Moux.    I had first visited this estate for my book on French Country Wines.  when Paul’s father,  André, was running it with his wife Suzette in the mid-1980s.  At the time you very much felt that they were among the pioneers of Corbières, and the next generation, Paul,  and his brother Jean, have maintained and improved the quality, and deserve a wider reputation than they currently have on the British market. 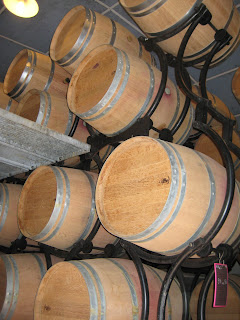 First stop was a cellar for barrel ageing.  The use the OXO  system which enables them to store the barrels five high – as many as ten levels is possible –and you can turn the barrels automatically so that racking is much simpler.  But it’s expensive.    For oak, they favour Darnajoux, a cooper  in St. Emilion, and use new wood very cautiously, renewing barrels after six or seven years.  They ask for a chauffe moyen. 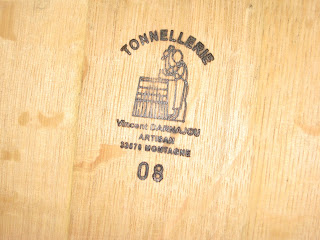 The barrels are expensive –‘ il faut pleurer’, to have your order accepted, and again when you pay the bill, said Paul.  Altogether, they have five ageing cellars, containing a total of 600 barrels,  three cellars  in the village of Fontcouverte, this one in Moux, and one at the Château de la Baronne, outside Fontcouverte,  which is where we went next to see the vineyards and vinification cellar.

Paul explained that the Montagne d’Alaric, which dominates the skyline, acts as a régulateur de l’eau; it is a limestone mass and operates like a sponge.  Its  altitude is between 270 – 300 metres, creating a microclimate, with the prevailing wind coming over the mountain, cooling the air, and making ultimately for more acidity in the wines.  The wind – and it can blow in the Aude – is ‘notre grand copain’. 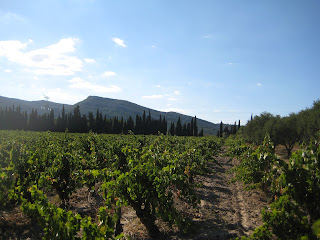 Altogether they have three estates, totalling 110 hectares.  There is Domaine de la Baronne, and adjoining it, Domaine las Vals, and they have a separate property, Domaine du Plo de Maorou, which is joint venture with the Jackson family in California, and only sold in the US.  The harvest was in full swing; everything is hand-picked and there was a cheerful team of Andalusian pickers in the vineyard – the same people return every year – 24 cutters and 6 porters, making an efficient team. 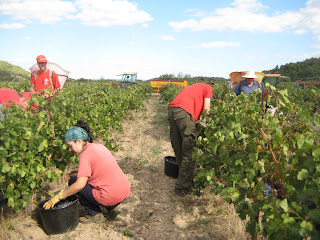 Paul explained that the vineyard soil is argilo-calcaire, but very heterogeneous; they have four geological eras within about four kilometres and about fifteen different terroirs within the estate, all based on clay and limestone.  Everything is organic; they were certified in 2010.  Their oldest vineyard is Carignan, which was planted in 1892 and  Carignan accounts of 40% of their vineyards.  Paul is particularly partial to that variety, liking its elegance and length and he finds it a very good expression of the terroir. 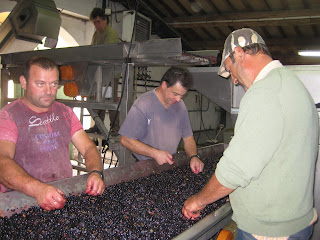 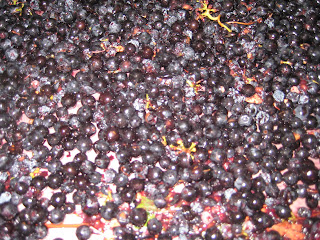 Back in the cellar grapes were being meticulously sorted.   Rejects are composted.  They use natural yeast, which gives a slower start to the fermentation and no S02 during fermentation, which takes place either in stainless steel vats or in tronconique oak vats.    There was Roussanne in a tronconique vat; which is given some skin contact until the fermentation starts.  It had been destalked.    Some Vermentino was given 24 hours of maceration in the press, and then settled at 14˚C for a débourbage, without using any enzymes.   A smiling Italian, Alessio, was running the cellar.   There is an Italian influence as the Tuscan oenologist, Stefano Chioccioli,  is their consultant, working alongside Marc Dubernet, who is based in Narbonne.

We tasted some Roussanne juice that was sweet and grapey, with acidity and not yet fermenting.  Paul explained that it can be difficult to control the temperature, if you have large vats for carbonic maceration.    Here they had small vats of Carignan, which makes for cooler temperatures.  The key factors are size of vat and temperature of grapes when they go into the vat.   You can’t control the temperature once the grapes are in the vat.   And you don’t want to identify the terroir with a Carignan  made by carbonic maceration; you can only identify terroir with a classic vinification. 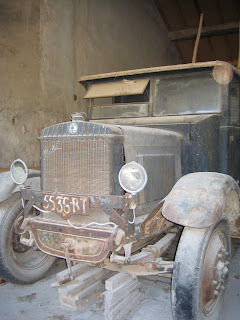 And in an outhouse was an old lorry, a Berliet dating from 1919, which Paul's great grandfather had driven, to deliver barrels.  It reached a speed of 13 k per hour –and curiously the steering wheel was on the right-hand side.  And then we adjourned to the old cellar that had been Paul’s great-grandfather’s, dated 1890, with the enormous foudres of Hungarian oak. 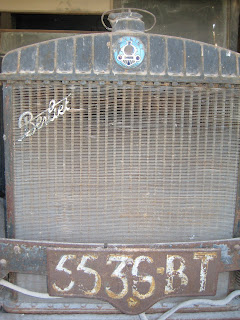 Paul explained that for his red wines, he makes three levels at la Baronne, namely les Lanes, les Chemins and a selection of different terroirs.

2011 Domaine des Lanes, IGP Hauterive – 9.00€
A blend of Grenache Blanc and Vermentino – 50/50  Light colour; light pithy nose; quite rounded with some fresh acidity.  Quite sappy; citrus notes,  grapefruit pithiness.    Not debourbé; natural yeast, but no so2.  So2 is good for conservation, but  during vinification is an extracteur, and ‘results in une extraction mal faite’.  Batonné sur lies.  Good mouth feel with a certain weight.

2010 las Vals, IGP Hauterive  -15.00€
From Roussanne grown on the foothills of the Montagne d’Alaric.   Light golden colour; quite rounded, rich, very good texture.  A blend of the three styles of Roussanne, stainless steel, barriques and skin contact with whole grapes.  There is a touch of tannin from the stalks, with refreshing acidity.  Paul observed that a low pH is a characteristic of the estate.  And the so2 is low too. 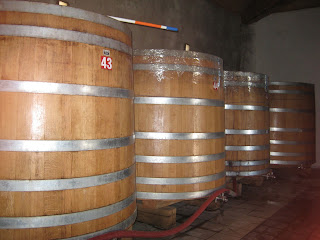 2010 Domaine des Lanes,  Corbières  – 2010
A blend of Grenache and Carignan.  No wood.  The wine spends twelve months in cement tanks, on the fine  lees, with some bâtonnage.  The wine is neither filtered nor fined.  Medium colour.  Rounded fruit on the nose.  Quite spicy berry flavours.  Some tannins, with an elegant palate and a fresh nervosité.  Medium weight and eminently drinkable.  They want buvabilité, which sounds more appealing than drinkability.

2010 Les Chemins, Corbières  – 12.00€
A blend of Carignan, Grenache and Mourvèdre, from different terroirs, and some aged in vat, and some in barrel.  Deeper colour.  A richer nose, more confit and a very rounded palate, but with a freshness and nervosité, and some lovely dry spicy fruit.  They are careful about extraction, aiming to extract as little as possible.  The wines are treated very carefully in the cellar, and great attention is paid to the work in the vineyards.  Paul was adamant that they do not want to make heavy or tiring  wines, and they have certainly succeeded, producing wines with an elegant finesse that leave you wanting more. 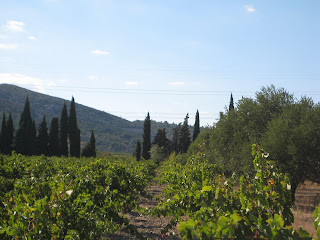 And then we went onto a selection of different terroirs, beginning with:

2009 Alaric, Corbières  – 17.00€
60% Syrah with some Carignan and Mourvèdre, mostly in barrel, but not new wood.  They do not want their wines marked by oak.   Deep colour, with a much richer more confit nose.  Quite solid and rounded on the palate, but not too heavy.  Dry spice balanced with elegant tannins.  2009 was a hotter year, so the wine is less fresh compared to the 2010s.  The Syrah dominates the palate.

2009 Pièce de Roche,  IGP Hauterive  -24.00€
This is the Carignan that was planted in 1892 – they have 4 hectares, with 15,000 plants. La Pièce describes  la plus belle vigne du domaine.  Traditionnel vinification.  Destemmed.  Quite serious, dense and concentrated, with acidity and tannin.  Very youthful.  Neither filtered nor fined.   Carignan always gives a tannic streak, with considerable length.  Dense rustic berry fruit. Paul observed that the cadastre viticole which records what was planted where did not start until 1905 – so they do know exactly what was planted after phylloxera and before 1905. 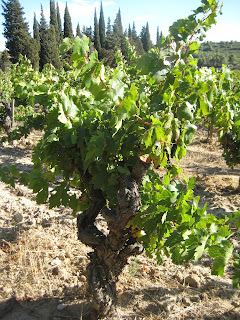 2010 Piece de Roche, IGP Hauterive
Again I preferred this to the 2009.  The was a wonderful purity of fruit.  Quite a firm nose, with some red fruit – those little griotte cherries.  A lovely freshness and more vivacity.  Very satisfying mouth feel.  Fresh acidity and tannin.  Stony fruit and minerality with some berry notes.  Again as little so2 as possible – they are working on reducing the sulphur levels. 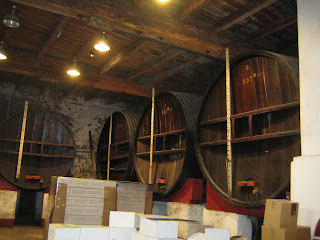 2010 Les Chemins de Traverse – 14.00€
A blend of Carignan, Syrah and Mourvèdre, vinified in the tronconique vats, without any additional so2.  Yeast always produce some so2.  Quite a heavy nose, a tad reduced, but with a fresh palate, fresh cherries, acidity and elegance developed as the wine breathed in the glass.   Quite a firm finish with tannin from the stalks.

Paul observed that there is an important market for wines without so2.  However, the vins natures need more polyphenols to protect them against oxidation, and you do not get the same identification of terroir that you get with more conventional wines.

A great visit with some great wines. 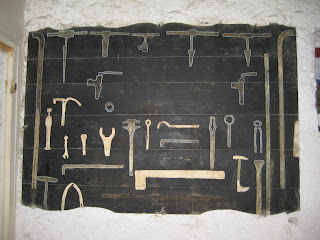