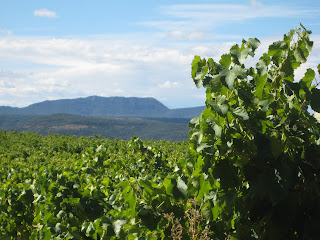 Jean-Baptise Granier comes from a wine making family.  His grandfather Marcel at Mas Montel in the village of Aspères in the Gard was one of the pioneers of the Languedoc; his father Jean-Philippe works for the Comité Interprofessionel des Vins du Languedoc  and is also involved with Mas Montel.   So it would have been very easy for Jean-Baptiste simply to join the family wine estate but no, he wanted to create something of his own.    And he was attracted by the hills of the Terrasses du Larzac, in preference to the flatter land of the Gard, where the wine is ‘good, but not great’.

Officially Jean-Baptiste does not own any vineyards, but buys grapes.  In fact he has created what you could call a small cooperative of four viticulteurs with vineyards in the village of St. Privat.   That way the wine growers who were members of the now defunct cooperative of St. Jean de la Blaquière can keep their vineyards, and continue to work them, under Jean-Baptiste’s direction.    They were losing money and the vines would otherwise have been pulled up.  Jean-Baptiste has established a cahier de charge and makes the key decisions in the vineyards,  which are now all organic,  They were already being tilled to remove the weeds, and now they share an intercep, a useful piece of equipment for getting at weeds within the row of vines.  Jean-Baptiste said he chose the plots first, but another criterion was that he also got on with the viticulteur, observing that he did not want to work alone.  You never drink wine alone – so this is a way of sharing the work and the experience. 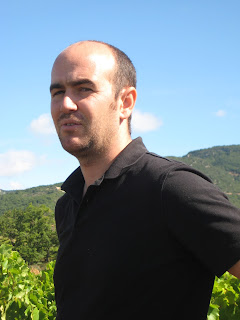 He took us to see the vineyards – they are in a beautiful spot up in the hills above St. Privat, with great views towards the Mont Liausson, six hectares altogether, in about ten plots, all pretty much on the same hillside, making up 60% Grenache, 20% Syrah and 20% Carignan, - some years he might also have some Cinsaut - at an altitude of 280 – 380 metres, so some of the highest vineyards of the Languedoc.  Part of the vineyard is on an outcrop of schist, some of the last schist of the Hérault, and there is also some marnes and some grès, as well as a little clay and limestone.   We tasted some grapes, the day before the harvest would start, with some lovely sweet fruit.   There had been some rain at the end of August, just what the vines needed, which gave them a spurt of energy.

And then back at his small cellar in St. Jean de la Blacquière we admired some shining new equipment.  Although Jean-Baptiste likes cement vats, he has sensibly bought some stainless steel vats as he does not know how long he will stay in this cellar, and might want to move the vats.  Also stainless steel is much easier to clean and uses less water.  He destems and has a sorting table, and then the grapes are lightly crushed.  It will all work by gravity – he doesn’t want to use a pump; they take too much water for cleaning.

Jean-Baptiste explained how he did a stage with Olivier Julien in 2007, including an experiment with some grapes from St. Privat.  They fermented Grenache and Syrah in an open demi-muid, racked it and put in to wood and liked the result.  In 2008 Jean-Baptise went to work chez Faiveley in Burgundy and enjoyed what he called the energy of a family négociant company, while Oliver Julien made a bigger cuvée of what they were beginning to call les Vignes Oubliées.  And it 2009 Jean-Baptise officially created les Vignes Oubliées, the forgotten vines.   And the 2010 and 2011 vintages were made in Olivier Julien’s cellar in Jonquières. 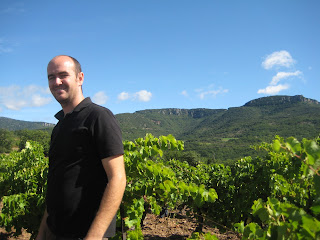 And then it was time for some tasting.  Jean-Baptiste makes just one wine each year.

2011 – bottled on 9th August.  And will be given three months élevage in bottle before he begins to sell it in October.   So 60% Grenache, 20% each of Carignan and Syrah.  And when does he blend?  That depends.  This time he fermented a vat of Syrah and Grenache together; it helps stabilise the colour of the Grenache.  And the wine spends nine to ten months in 500 or 600 litre demi-muids, with no racking and fining, and just a light filter.  Very perfumed nose; liqueur cherries, so very Grenache. Some peppery notes on the palate, so more Syrah on the palate, with some lovely ripe fruit.  Quite rounded with a firm tannic streak; ripe and balanced and rounded.  Tout en finesse.

2010 – same vinification.  16.00€  18.000 bottles were made, and virtually all sold out.
Good colour; some peppery and spice on the nose; nice leathery notes. Quite fleshy.   Medium weight.   Lovely depth and length.  You can definitely taste a similarity between the two wines.

And Jean-Baptiste is also doing some experiments with white wine; he has access to a little Clairette, Roussanne and Grenache blanc, which are fermenting in six Burgundian pieces.   I loved his red wine, so I can’t wait to try his white. 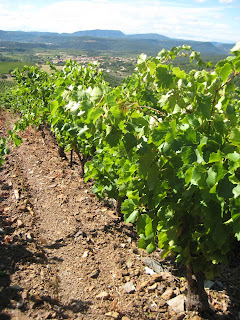