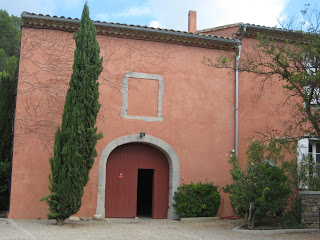 An encounter with Anne Lauvige at a tasting in London resulted in an invitation to visit Château Prieuré Borde-Rouge in the Corbières near Lagrasse.  Pierre Roque, who is their consultant oenologist, was also there and we said a brief hallo to Bertrand Boileau, the cellar master, who was busy with the harvest.

First a quick update.  I remembered coming to this estate at in the late 1990s were when it was owned by Alain and Natasha Quenchen. They had bought an abandoned property in 1994 from an old lady who sold her wine en vrac to the big producers' union of Vignerons Val d’Orbieu,  so that it was Alain and Natasha started the path of reviving the fortunes of Prieuré Borde Rouge.  They renovated the cellar and planted some Syrah, and concentrated on the best 20 hectares of the estate.   Then in 2005 after Alain’s death  the property was sold again to a father and son, Jean and Frédéric Carrère, who work in property development, but wanted a base for their family in the region where they had spent their childhood.  They had looked for and found a functioning vineyard. 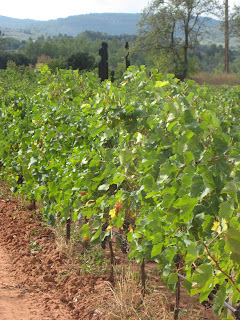 We were taken first for a walk, and then a more extensive drive through the vineyards.  The first thing you notice is the red soil, which matches the red plaster of the house.  A lot of work has been done in the vineyards.  They are now organic; they have regenerated the fauna of the soil, using tons of manure each year and also bought back some of the original vineyards which had been sold off, so now the estate totals 39 hectares, on clay and limestone, with a high iron content.  They have also planted olive trees, not just the Lucques that are common in the Midi, but seven or eight other varieties. 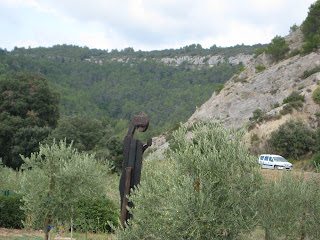 They were mid-vintage at the time of our visit in mid-September.  Whites and rosé had been picked the previous week and they were about to start the reds.  The crop is down on last year; Pierre wasn’t sure why.  The sortie had been difficult; last year there had been a large sortie so perhaps a natural balance had come into play.   The prieuré depends on the stunning abbey of Lagrasse; there is a path past the vegetable patch into the nearby village, which the monks must have used.   And as for the red soil, local legend has it that Charlemagne fought and defeated the Saracens in this valley, and the soil is red with their blood.  The village used to be called Lemaigre and the name has changed to Lagrasse, from thin to fat.

They are equipped to irrigate in some parts of the vineyard, as they want to avoid stressing the vines, but it is not drip irrigation; instead the equivalent of good 20 millimetres of rain can fall at any one time.  The principal grapes are Grenache, Syrah and Carignan, with a little Merlot for vin de pays, and they also planning to plant Cinsaut.  And for white wine they have Grenache Blanc, some old Macabeo and Clairette and some Roussanne, and 2012 will be their first vintage of Vermentino.  And they have also planted some Viognier.  With such an eclectic mixture of grape varieties, the harvest lasts about a month.  They were not expecting to pick some of their Grenache until 1st October.   We stopped in a vineyard to admire some terraces of vines and an old capitelle, as well as checking the taste of a grape or two.  Some Grenache was quite perfumed and some Carignan has more acidity. 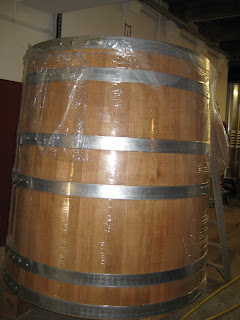 The cellar all works by gravity, so there is no pump.  A tronconique vat was wrapped up in plastic, waiting to be put to use – le petit bijou de cette année, observed Anne.   And in 2011 they had a new press.  There were some new barrels, both barriques and demi-muids; they experiment with different wood and chauffes;  the cements vats had been lined with epoxy and there are some stainless steel vats too. 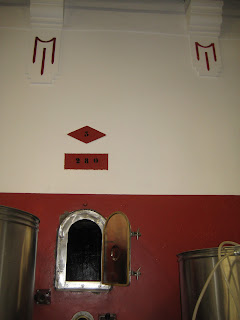 And then it was time for some tasting – first some juice.  This is tricky.   I followed Pierre’s observations.

The white juice was just starting to ferment.  Pierre explained how the sugar can camouflage things, and there is a yeasty quality, but also some good acidity.  He thought it prometteur, and the flavour was marked by the Roussanne.  Grenache Gris and Blanc are more discreet.

And then we tried the rosé which has been fermenting for about three days, so it had less sugar but much more acidity.  Some cherry fruit, and acidity from the Carignan.  It is a rosé de presse; the grapes for the white wine will be riper than for the rosé, to maintain acidity. 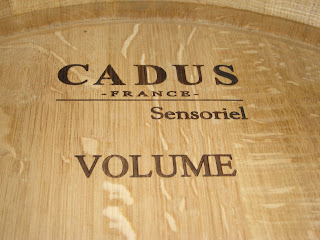 2011 Carminal Blanc – 9.80€
Grenache Blanc – there’s a bit of Grenache Gris too, though theoretically that is not allowed in Corbières.  Roussanne, and a little Macabeo and Clairette.
A little colour.  Quite a rounded nose; some body,  some weight and a streak of tannin.  20% of the blend is fermented in new oak with a two month élevage to provide some weight and texture, which are balanced with acidity.   The name Carminal is an invention, from carmine, a red colour, and cardinal, for the ecclesiastical associations.   A herbal note.  The Roussanne adds some complexity, and as will the Viognier and Vermentino when they come into production.

For red wine, they explained that they wanted to balance the traditional with the more aromatic and fruity wines that the consumer wants today. 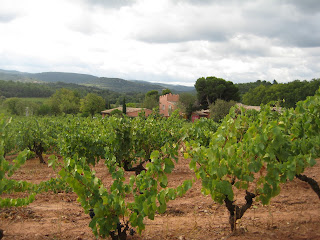 2011 Rubellis Rouge – 6.50€
A blend of 45% Carignan, 35% Grenache and  20% Syrah.  From younger vines and aged in cement.  The percentage changes, depending on the vintage.  They are looking for elegance and something un peu sauvage, a touch of the wild side.  Good young colour.  With red fruit on the nose and a touch of leather.  Quite gutsy on the palate, ripe and leathery with more black fruit and some herbs of the garrigues.  Quite rugged, definitely un peu sauvage, but also very gouleyant.  Medium weight and quite a firm finish.

2009 Carminal – 9.80€
50% Syrah, 35% Grenache and 15% Carignan.  The Carignan and Syrah spend 12 months in wood, while the Grenache remains in vat, and then they are blended and spend a further six month in vat before bottling before the summer.  However, this year they are planning an experimental fermentation in the tronconique vat, probably of Carignan.  The nose was quite rounded, with some leathery spice on both nose and palate.  Some nicely integrated oak with firm tannins.  Good depth, with a rounded finish.  Very satisfying.

2010 Carminal – recently bottled
Young colour.  Quite a firm young nose, with some black fruit and tapenade.  Youthful palate with acidity and tannin.  Very tapenade, with good body.  Pierre observed that the tannins had suffered and not yet settled down after bottling.  They are changing the style a little and looking for something more opulent, but with a certain fraicheur.

2007 Ange – 17€
This was the flagship wine of the previous owners, with a first vintage in 2001. a blend of 60& Syrah, 30% Grenache and 10% Carignan, a selection of the best plots.  Half the juice was fermented in 500 litre barrels –  and then all the wine was aged in new oak for 12 months.  Good deep colour. Very rounded cassis nose.  Very harmonious and beginning to evolve.  Some cedary notes on the palate.  Elegant and still youthful, but developing beautifully.  A long finish. 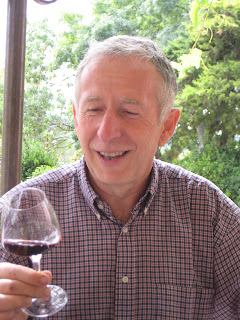 2009 Ange
Medium colour. Quite rounded ripe nose.  Ripe cassis fruit on the palate.  Very rounded and harmonious with more depth than 2007.  In 2009 all the wine was fermented in 500 litres  barrels, and there was more Carignan in the blend, which adds freshness.  Carignan is the signature of the Hautes Corbières.  And Pierre observed that they were working on the epaisseur of the wine, depth rather than thickness, I think as a translation.

2010 Ange
Bottled ten days ago.  Very similar in style but a cooler year.  Young colour.  Quite a tight closed nose with firm red fruit. Quite a perfumed palate, with fresh young fruit.  Some hints of tapenade.  Elegant with good depth.  The Carignan component comes from 60 – 75 year old vines.

Rosâme, Vin de France  – 13€ for 50 cl. From the 2010 vintage with a little 2011.
Le petit bonbon observed Anne.  Grenache Gris from a small vineyard  that had been forgotten, so it did not get picked until November.  The grapes were at four stages of ripeness, ripe, confit, flétri or withered and  raisins.  The colour was orange pick with some ripe spicy honey on the palate, a rounded palate, reminiscent of sherry trifle and honey, with good acidity.  The ferementation was stopped at 15º, leaving 50 gms/l of residual sugar.  It was a lovely finale to the tasting .

And for lunch we were treated to some deliciuous  local charcuterie, which went beautifully with the wines, and freshly picked tomatoes from the vegetable garden. 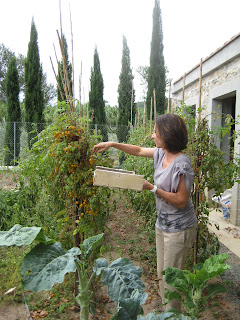