Château Beauregard-Mirouze in the Corbières, 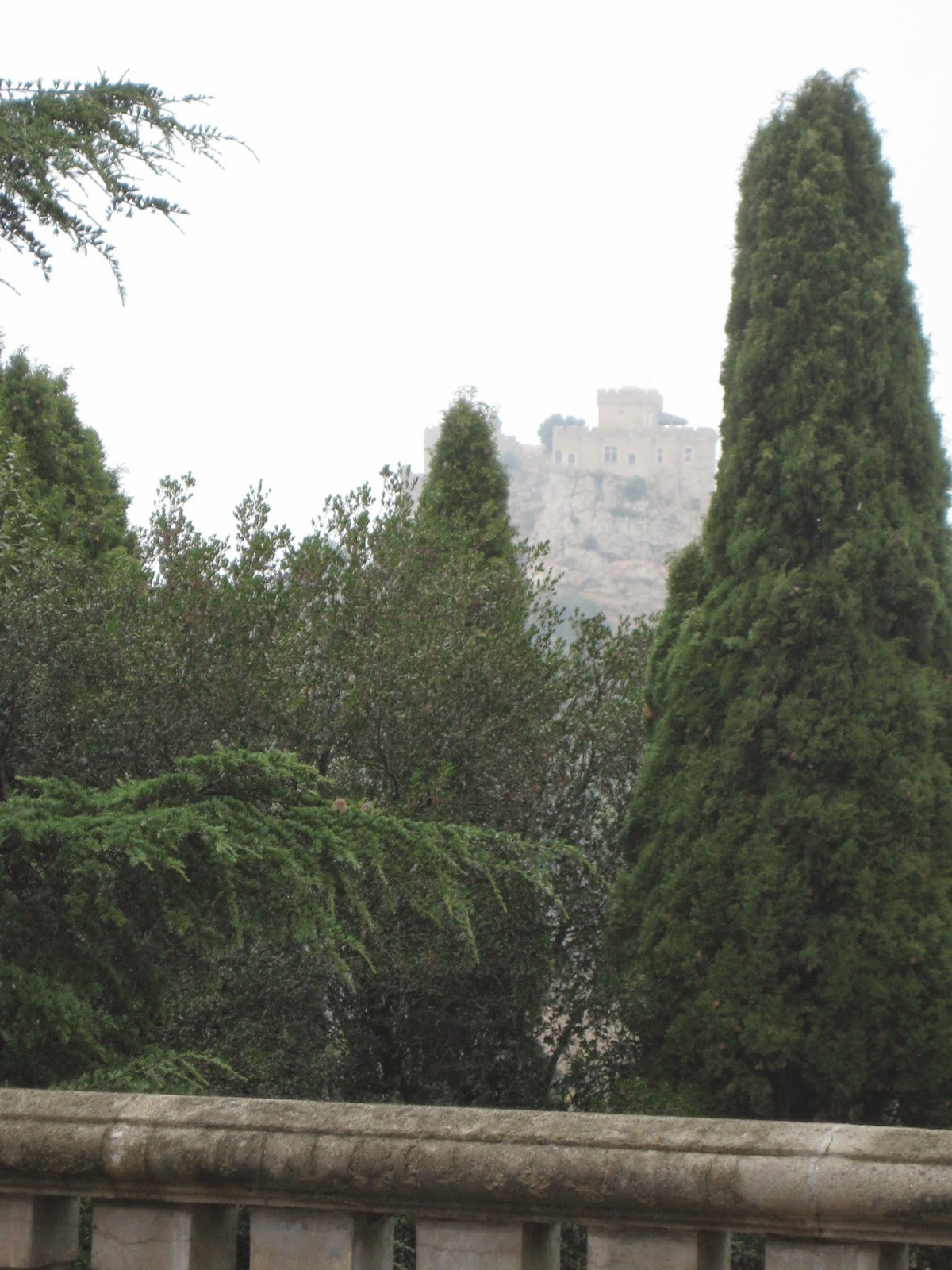 I have met Karine Mirouze a few times at various wine fairs in London and France and enjoyed tasting her wines, so she encouraged me to come and visit.  She is actually breathtakingly efficient and did not forget that I said that I would be in the Languedoc in September and a date was in the diary by early August.

The property comes from her husband, Nicolas’s family and wine has been made here since the 1880s.  It is close to the wonderful Cistercian abbey of Fontfroide, which is more than worth the detour.   Close by is the château of St. Martin de Toque, to which Beauregard once belonged, but these days there are different owners.   On a Monday morning of uncertain weather, it was shrouded in mist.  In the 1960s the vineyards were run by Nicolas’ grandmother, evidently une femme formidable in the best sense of the word.    She planted some Syrah as early as 1967, but never bottled any wine, and otherwise did not renew the vineyards much.   Her children were not interested in the estate,  So Nicolas is the first member of his family in seven generations to live there and run the estate as his principal occupation.  It is a choice that he made, and he is clearly passionate about his vineyards.   ‘We know our vineyards;  we are in them 365 days of the year’. 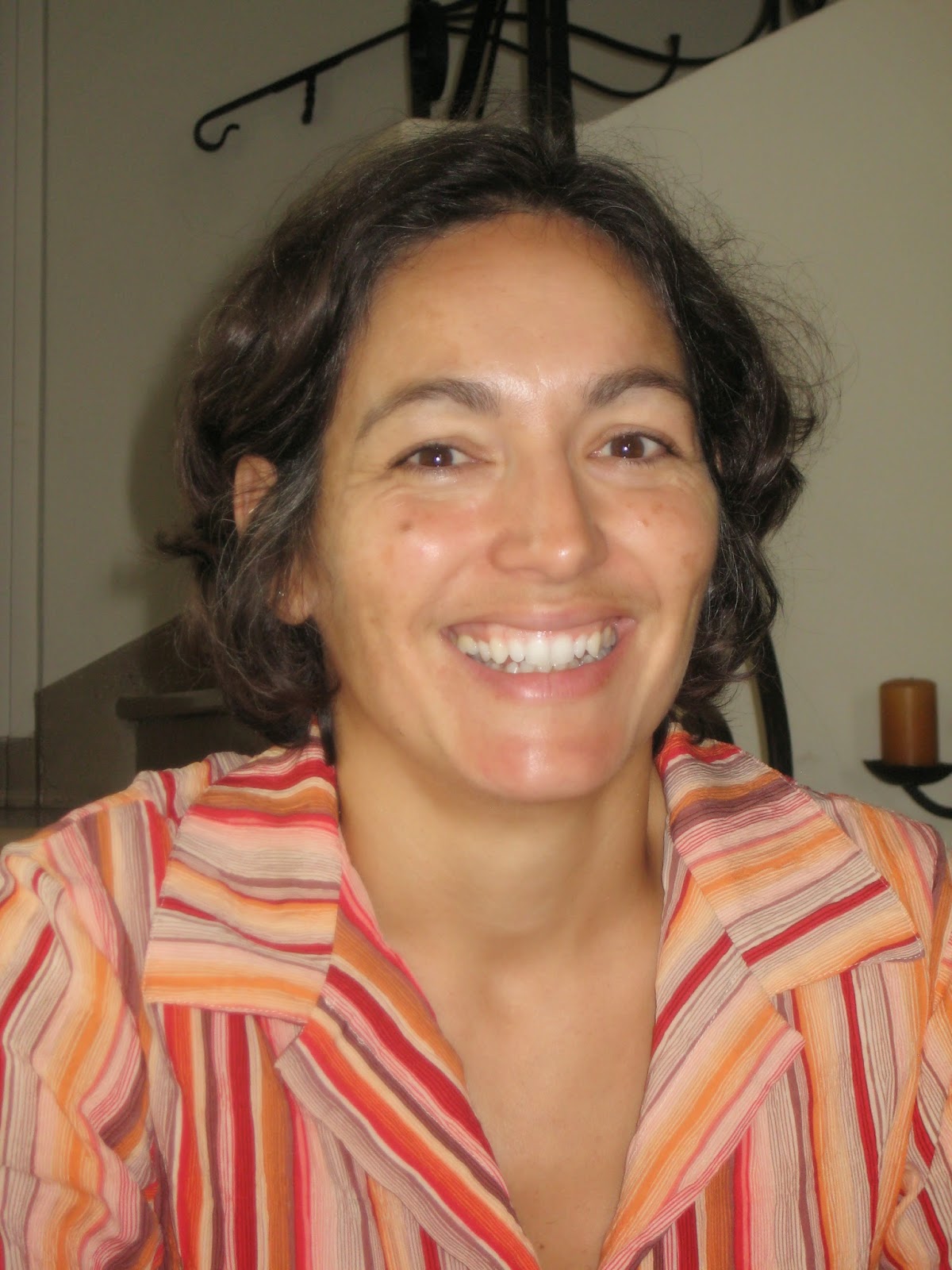 Karine explained that she and Nicolas met in Paris; she comes from Bordeaux and  they were both studying agriculture.   Nicolas’s father was in medicine, so Beauregard was his childhood holiday home.  They went to see his grandmother, and the seeds for the adventure were sown.   La passion est née de la rencontre, as Karine put it.  It was a question of starting from scratch, and Nicolas’s  grandmother,  who is now in her 80s, was thrilled.   Karine described her as a visionary in her time, and although she now lives in Montpellier, she comes to Beauregard for the harvest.

First Karine took us on a tour of the vineyards.   They have 25 hectares of vines, including 14 hectares of Corbières, and altogether about 300 hectares of land, with vineyards surrounded by garrigues  and pine trees,  which is very good for organic viticulture as it avoids the problems of neighbours’ sprays.      There is Syrah, Grenache, Mourvèdre and Syrah, but no Carignan, and for white wine, they have Marsanne, Roussanne, and Vermentino.   The old Carignan vines didn’t ripen properly, neither did the Bourboulenc; it proved as difficult as Carignan.  The eleven hectares of vins de pays are planted with Viognier, Merlot, Cabernet Sauvignon and also Syrah.    The soil is stony sandstone, with north facing vineyards, making for cooler nights at 200 metres altitude.  And the soil is acid, as witnessed by the presence of heather, and some of it is red, indicating the presence of iron. Wild boar are a problem, so they install electric fences when the grapes are ripening.  Altogether there are eleven plots of Corbières,  and six for vin de pays, much of which they sell to the négoce. 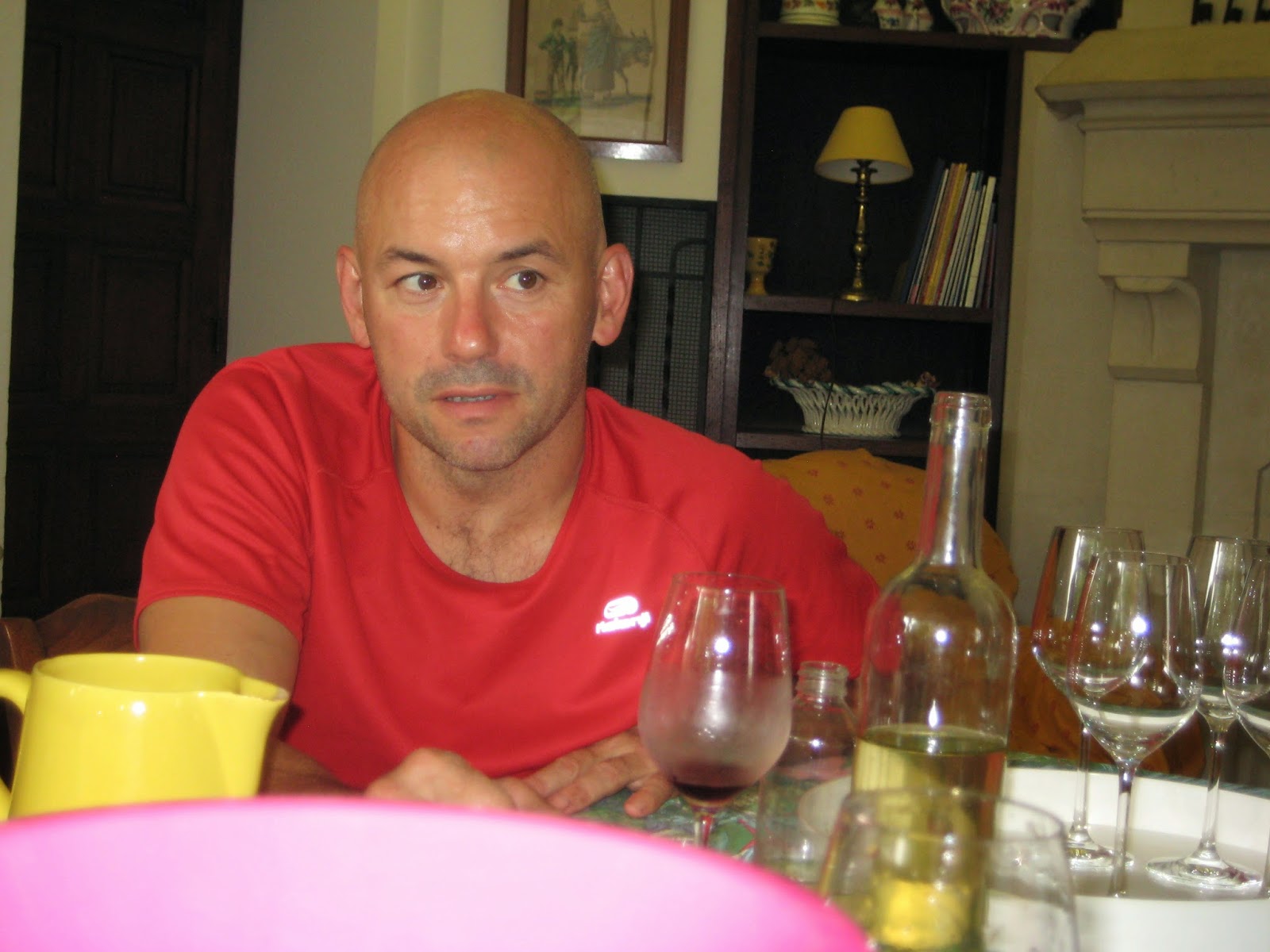 The cellar is a standard Languedoc cellar, with natural air conditioning as it is partly underground, with large concrete vats, which they can fill by gravity.  At one time it processed 5000 hls from 50 hectares; these days their annual crop is about 800 hls.  The old foudres have long since gone.  Some of the original concrete vats are enormous, 312 h – 276 hls – they prefer smaller vats with chapeaux flottants.  The barrel cellar is built in to the rock, with 600 litre tonneaux and barriques, usually from the forests of the Vosges and Tronçais.
The first grapes, Viognier, were picked on 6th September, mechanically at 3 a.m. The juice was chilled, this year it is very clear, a reflection on the health of the grapes.

We sat round a large table in the family house and tasted. 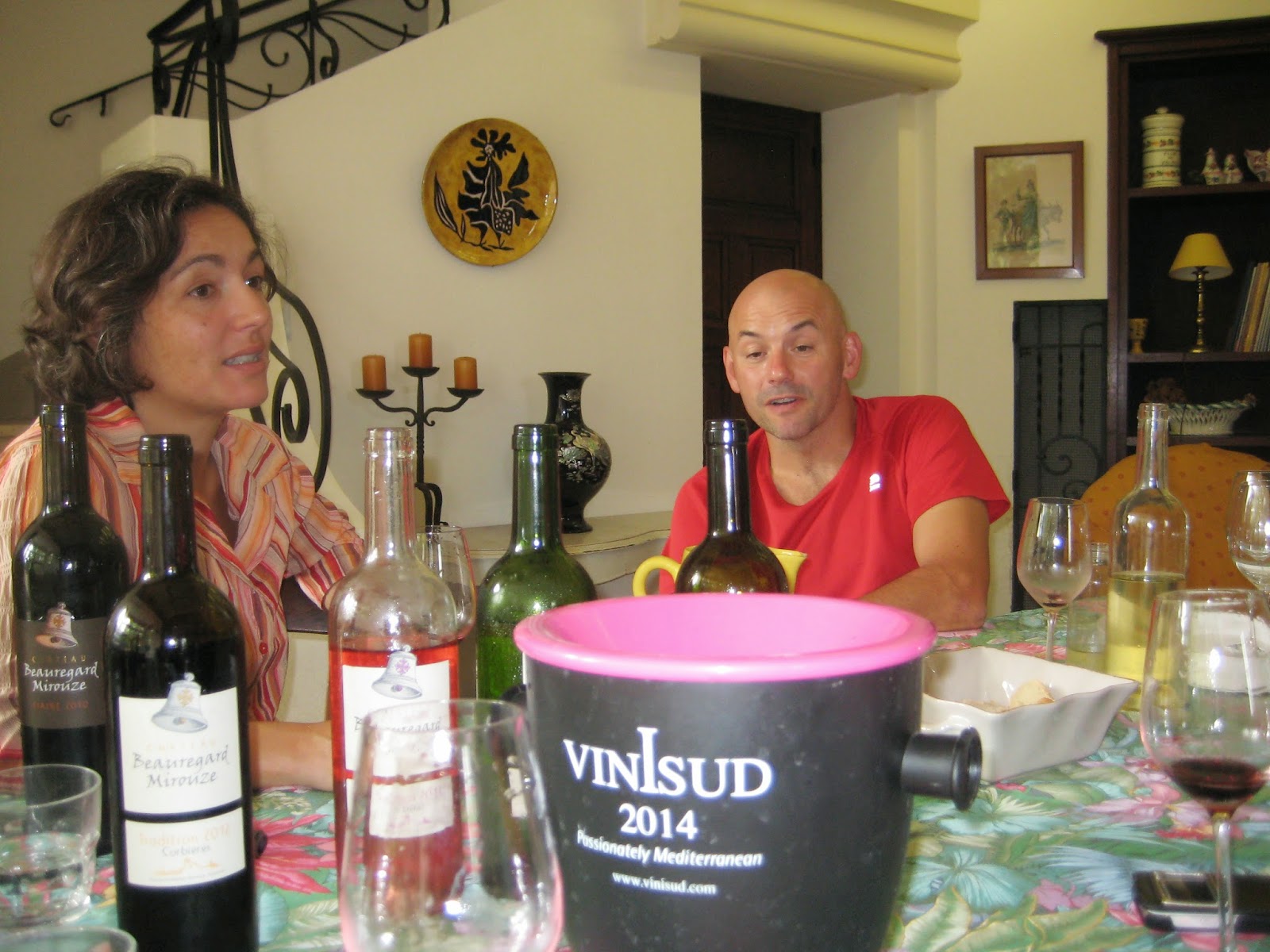 2013 Corbières, Tradition Blanc – 7.00€
30% Roussanne, Marsanne 50% plus and the rest is Vermentino.  A simple vinification and bottled at the end of January.  2013 is only the second vintage of  this wine.  These are young vines.  Light colour.  Quite a fresh sappy nose.  Good acidity.  Some stony refreshing fruit. With a touch of minerality.  Medium weight.  Fresh and youthful.

2012 Corbières Blanc Lauzine – 12.00€
Lauzine is the name of the plot.  Auze is a chêne verte in Occitan.   From the same three grape varieties, but fermented in barrel.  Light golden.  A rather flat nose, with a touch of oak.  Much  more depth in the palate.  Quite elegant and buttery., with some oak    Karine observed that the vent marin which was blowing that particular morning can sometimes flatten the wines.  2001 was their first vintage, and they talked about learning about their wines. You need  to find the right cooper; they had tried American and Bulgarian oak and have opted for light toasting.  Mathieu Dubernet, son of Marc,  is their oenologist.

2012 Corbières Tradition Rouge – 7.00€
Half Syrah, half Grenache; élevage in vat for nine to twelve months.   Medium colour.  Some berry fruit on nose.  On the palate lots of nuances, a leathery note, some garrigues, some spice.  Supple tannins.  Medium weight with a fresh finish.

Nicolas talked about the côté réducteur, when the new wine needs some aeration.  Pigeage is good to balance that, rather than délèstages.  They destem all their red grapes and the maceration lasts about ten to fifteen days.  They do not want long extractions, and like to blend, beginning at the beginning of the fermentation.
There has been talk of various terroirs for Corbières as it is a very large appellation.  Boutenac has emerged as a cru, but none of the others, but I wondered about the identity of the vineyard around Fontfroide.  Nicolas suggested finesse, rather than power.  The climate is cooler than some parts of the Corbières, and white wine does well here.

2011 Corbières Lauzine – 12.00€
70% Syrah with some Grenache Noir.  A longer cuvaison, with some pigeage.  About 60% élevage in barrel, depending on the vintage, and not all new wood,  and the rest in vat.  Medium colour.  Delicately oaky.  Quite firm fruit on the nose.  More depth on the palate.  Quite elegant with some garrigues notes, liquorice and mint.  Supple tannins, Nicely balanced, but with no great concentration.

2010 Corbières Fiaire – 20.00€
The name of the hill and a selection of the best grapes. They chose two or three of the best barriques from Lauzine and keep them for longer.  So all aged in wood, and predominately Syrah, as well as some Mourvèdre.  Deeper colour. Quite solid and dense and the nose, but quite an elegant perfumed palate, with some tapenade notes.  Nicely nuanced with supple tannins.  Ready for drinking and a long finish.

2010 Corbières  Fiaire blanc. – 20.00€
Again from the best barrels from Lauzine.  They do a malo-lactic fermentation, and allow for some oxygenation.   Bâtonnage simply by turning the barrels – bâtonnage protects against oxidation.  12 months on the lees.  No sulphur during vinification, only at the harvest and at bottling.  Quite a deep golden colour. Quite rich and leesy. Very rich palate; smooth characterful, buttery notes.  Good depth.   Notes of fennel and aniseed. Rich and quite opulent.  Long and very satisfying.

And we finished with a taste of the Viognier that had been picked two days earlier.  It was already very clear, with honeyed notes and soft acidity. 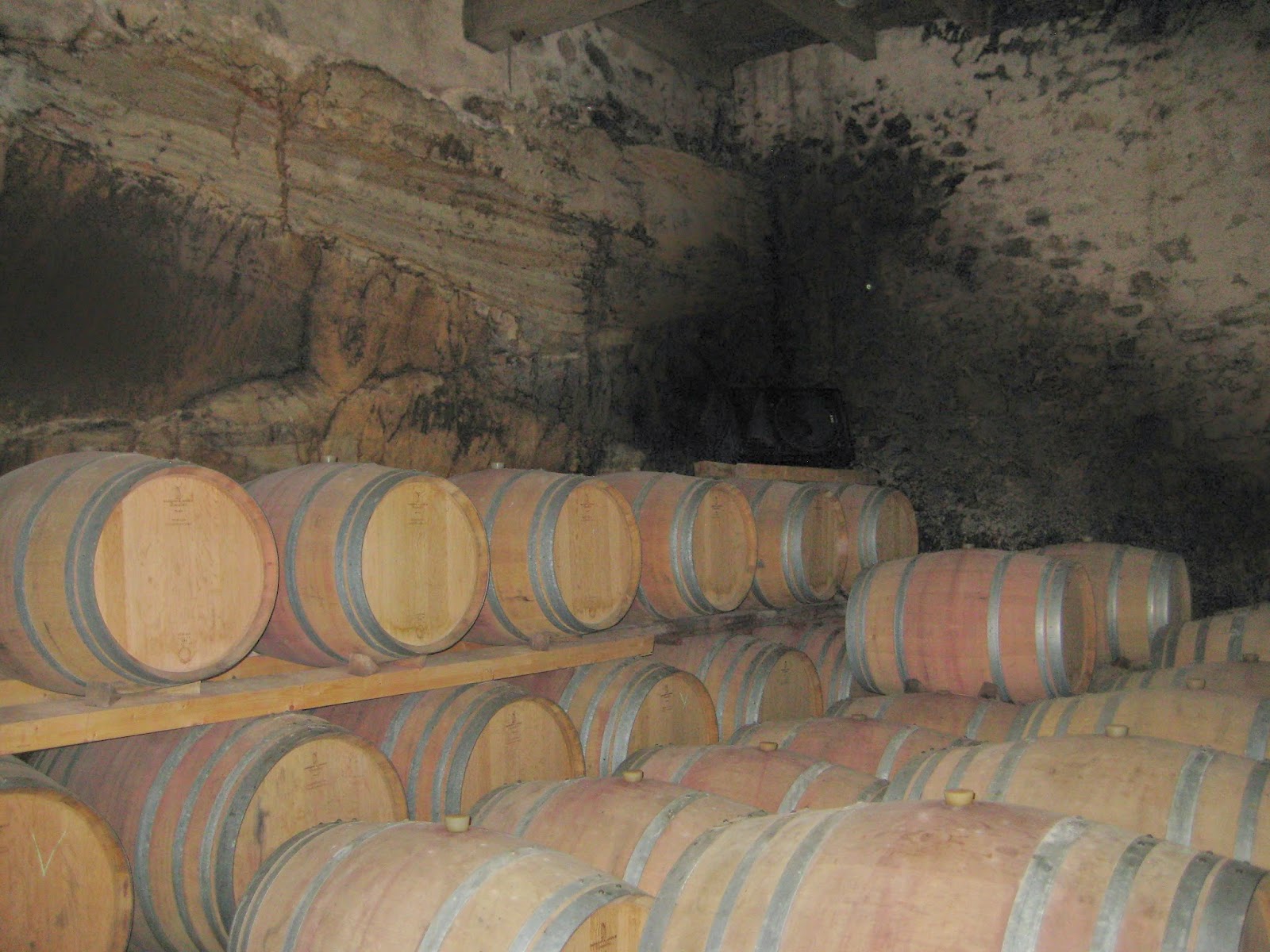 Alan March said…
By coincidence we were in the Corbieres last week to visit and wine taste. Fontfroide was lovely, a surprisingly rich variety of stained glass being a highlight. We tasted mainly in the Boutenac area and stayed with a young winemaker in Ribaute. My favourite wines were, however, those of Domaine des 2 Anes at Peyriac De Mer, really refreshing and with a cleansing acidity as well as the fruit. Too many other wines from the area remain too heavy and cloying for my taste. I look forward to finding some of Beauregard-Mirouze wines, though at the lower price level rather than the barrel fermented end of the range.

Rosemary George MW said…
I don't know 2 Anes - must check them out - and the stained glass at Fontfroide is an absolute delight, very inspiring, so is the rose garden in the right season. Post on another Corbieres, Clos de l'Anhel will be following when I am back from the Digital Wine communicators' conference, or what I think of as the wine bloggers' conference.
29 October 2014 at 19:27