Foncalieu, or to give the company its full name, Les Vignobles Foncalieu, was a familiar name to me, and it is certainly an important name in the Languedoc, but I have to admit that I really did not know very much about them.  However, after two days in the Languedoc last week, that has all changed.

Altogether they work with 5100 hectares of vines in three regions, namely Gascony, the Rhône Valley and the Languedoc and cover 20 appellations and vins de pays.   Two things stood out: they have a very strong quality motive and they are also very innovative.   They were the first to plant Sauvignon Gris in the Languedoc and now make both a white and a rosé from that grape variety.  They also have some Albariňo and Picpoul Noir for rosé, and at dinner on our last evening we drank a rosé that was a blend of 80% Syrah and 20% Viognier; the two grape varieties are co-fermented, with early picked Syrah and late picked Viognier.  To my knowledge I have never drunk that blend in a rosé before. 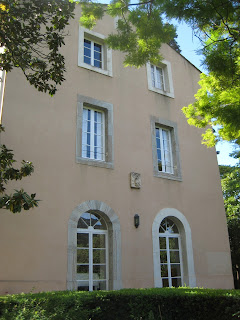 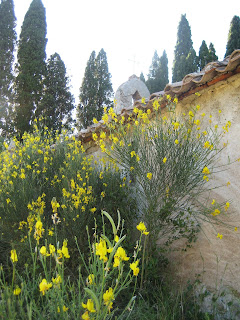 More unusual is their Atelier Prestige range, which they began in 2008, with the first real vintage in 2009.  The wine maker, Isabelle Pangault, talked about the way they chose the vineyards for these wines.  Obviously the terroir must be good, with vines in particularly good sites, but much also depends on the human approach.  They work with a very small number of winegrowers for each of the four wines, people who are possibly more daring and certainly more willing to take extra care of their vines.   They talked about épamprage – new term for me – when you remove any young buds from the trunk of the vine as they take energy from the shoots.   They also practice ébourgeonage (debudding), effeuillage, (removing leaves that shade the grapes) rebiochage – another new term entailing the removal of shoots between the main shoots, rather as you do for tomatoes, and they also do a green harvest, if necessary.  The aim is to show that it is possible for a cooperative to make high quality wine in the Languedoc.  The wine growers are paid per hectare, so the yield is not a significant issue for them financially. 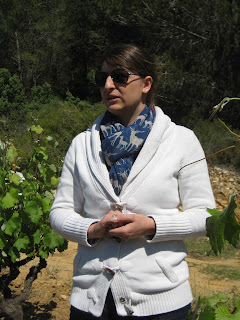 First we went to Puicheric in the Minervois where we met Romain Torrecilla who is one of two growers who produce the grapes for Le Lien, Minervois.  He has a plot of Syrah, grown on clay and limestone.  It was a windy spot on a May afternoon, and the Syrah’s fragile shoots certainly needed the support of the wires.    Romain has also planted truffle oaks, ten years ago, but he is still waiting for a crop. 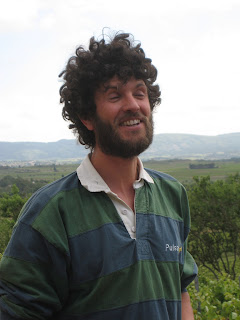 Marceau Lacombe is one of three growers who contribute to La Lumière, Corbières.  We admired his Mourvèdre, which gives freshness and spice to the Corbières.  They are gobelet vines, with tall upright shoots.  In contrast the adjoining Carignan vines looked much shaggier.  Isabelle talked about the natural low yield on this south facing vineyard, with one cluster per shoot.  The harvest is quite late, usually in mid-October. 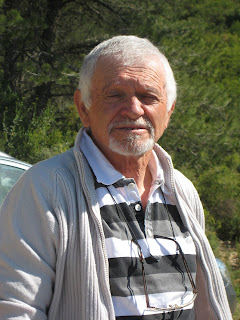 I encouraged Marceau to reminisce over lunch.   He began helping with the harvest at the age of 10 and was driving a tractor at 14.  He is now 68, and his vines are his life.  He remembers working with a horse, and they got a caterpillar tractor about 50 years ago.   With a horse one family could live on 10 hectares, but these days you need 30 hectares to justify the machinery.   Also products like bouille bordelaise were much cheaper than those used today.  Officially Marceau is retired but he has a much younger sister and looks after her vines, as well as nurturing his own small plots of Mourvèdre and Carignan.   A day does not go by without being in his vineyard.  Three wines growers contribute to La Lumière, so we also admired Fabrice Oliver’s beautifully tended Syrah vines. However, Marceau was quite adamant:  Syrah is not from here and he doubts its suitability.   People are beginning to replant Carignan. 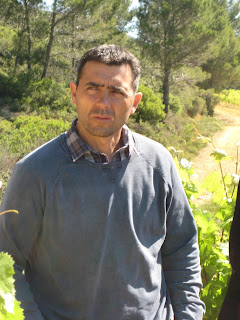 Next we went to the Coteaux d’Ensérune, admiring en route the facade of the Languedoc’s oldest cooperative at Maraussan, with its stirring name, Les Vignerons Libres.  Myriam Roussel is one of eight growers who contribute to Les Illustres, Coteaux d’Ensérune, which is a blend of 60% Syrah, 30% Cabernet Sauvignon and 10% Malbec.  She has two hectares of Syrah for Les Illustres.   The vineyard is on a small hill, close to Béziers, with views of the cathedral, and you could just glimpse the sea in the distance. 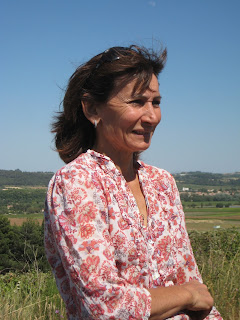 We finished at Michel Cazevieille’s vineyard in the south east corner St. Chinian where the soil is also clay and limestone.  He contributes three hectares, of Syrah and a little Grenache to Apogée, with a second grower providing a small amount of Syrah.  Michel talked about the soil, explaining that they analyse it every three years and add organic compost as needed.  It is important that the soil has structure and balance.   And he talked about their very finely tuned mechanical harvester which will remove any stray vegetation or shrivelled berries. 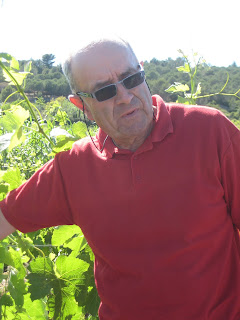 And then we tasted the four wines under the shade of a large mulberry tree.

2012 Le Lien, Minervois
A pure Syrah, all of which is aged in oak, of which 25% is new.  The oak treatment is very much adapted to the appellation and to the vintage.   Deep young colour with a rich rounded nose, quite a firm palate with black fruit and youthful tannins.  Quite sturdy and concentrated.   An observation was made that the quality of the harvest in the Minervois depends upon the wind.   I thought that Corbières was even windier, but maybe not.

2012 Corbières, la Lumière
A blend of 30% Mourvèdre and 70% Syrah.   The fruit is firm and study, mainly black fruit with tight tannins, and a peppery note and some spice.  Youthful with masses of potential, as indeed has the whole range.  The vineyards are not far from the sea as the crow flies and so enjoy both sun and marine influence.    The grapes are given a three to five week maceration, and spend a year in 300 litre barrels, 80% new, with different toasting and from different coopers.

2012 L’Apogée, St Chinian
Two wine growers with a blend of 80% Syrah and 20% Grenache Noir.  Deep young colour.  Firm sense youthful peppery fruit with a hint of vanilla.  A powerful 14⁰ but more supple than the Corbières.  100% new oak – 300 litre barrels rather than barriques.

2012 Coteaux d’Ensérune, Les Illustres
60% Syrah, 30% Cabernet Sauvignon and 10% Malbec.  25% in new wood with 75% given an élevage in vat.   Medium weight palate.  Quite tannic but with a fresh note, with some fresh blackcurrant fruit.  Maybe more elegant than the traditional Languedoc appellations.

The four wines made a fascinating comparison and were certainly fine examples of their appellations  They are intended for the on trade, but would retail at about £25,  or 19€  in France. 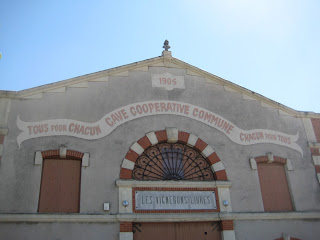