A vertical tasting at Mas Gabriel 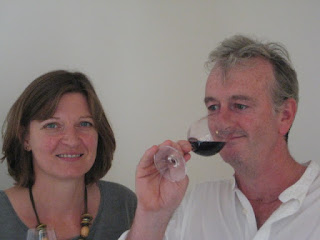 Deborah and Peter Core at Mas Gabriel are about to make their 10th vintage and they felt the occasion should be marked with a vertical tasting of both their Carignan, the white Clos des Papillons and red Les Trois Terrasses.   I love vertical tastings and this was no exception.

2014:  For the first time this included 15 % Vermentino, and the drop of Viognier which had been in earlier vintages has gone, as the vines have been pulled up.   Between 25%  and 50% of the wine is fermented in acacia barrels, which fills out the palate a little, and there is also some lees stirring, but no malo, as they want to retain the fresh acidity.  The Carignan vines, which are nearly 40 years old, are grown on clay and limestone, while the Vermentino, which was planted four years ago, is on galets roulées.    There are just 40 hectares of Carignan Blanc altogether in the Languedoc, of which they have about 50 ares, just half a hectare.   Apparently there are moves to include Carignan Blanc in Faugères Blanc.

2014 was not an easy vintage.  A very dry winter followed by a very dry spring.  The vines stopped growing until the first rains of the growing season in June.  And the harvest was tricky with some big storms.   Picked on 8th September.

Light colour.  Delicate nose, lightly nutty, lightly herbal and on the palate very good acidity.  Structured and tightly knit with firm fruit.  They pick to retain acidity.  And they are a few Carignan Gris vines in the plot, which have a light pinkish tinge, but that was not imparted into the wine.

Initially the yields were derisory, 12 hl/h but by giving the vines lots of TLC and feeding them lots of organic compost, they have raised the yields to a more reasonable 20 – 25 hl/ha.  They have just added to their original vineyard, doubling the size, planting it with cuttings taken from 70 year old vines at Mas Jullien.  The vine nurseries cannot provide Carignan Blanc as there is no recognised clone.    Peter and Deborah admitted that they were inspired by the example of the white wine, Daniel le Conte de Floris, another talented wine grower with vineyards in Caux.

2013:  A cool year, which started late.  Summer did not arrive until the beginning of July.  A late harvest as a result of the late start to the growing season.   A damp spring, a cool June and also a cool August to made for grapes with good acidity.   Picked on 16th September.  Their largest crop ever. The vats were full.

The nose is beginning to fill out a bit, as is the mouth, but the wine is still very fresh with firm acidity.  Structured and tight knit.  A certain seamlessness and a certain salinity.  Some hints of greengage; a sappy note and a touch of honey.

2012: Although the autumn of 2011 was very wet, the winter was very dry, so a dry start to the growing season, but spring was also very wet.  However, rainfall for the year turned out to be  40% below normal, but as Peter put it, vines are great survivors.   Picked on 29th August.

A little more colour. Quite rounded with layers of flavour and lots of nuances.  The wine is filling out with riper greengages and a little more alcohol at 13.9.  Some white pepper and spice on the finish.  Good length and nicely rounded.

2011: A dry winter followed by heavy rain in March.  A relatively dry spring, followed by a wet summer.  May was hot, but June, August and September were cool and fresh.   Picked 24th August.  A little colour.  Very firm acidity.  Tight knit and herbal.  Almost Riesling razor-sharp acidity.  Develops some hints of dry honey in the glass.

2010:  A  wet winter followed by a cool spring.  July and August were hot and dry with cool nights, making for a good concentration of fruit and freshness.  Gentle golden colour.  Rounded dry honey and beeswax, with very good acidity on the palate.  Still very youthful, with dry honey and some weight.

2009 was their first vintage of Clos des Papilloons, but sadly there is none left.

And now for the red, Les Trois Terrasses, which was initially pure Carignan and then more recently has been blended with up to 30% Syrah and Grenache Noir, with blending after the malo.  Kept in vat, not barrel.  Bottled in the July following the harvest.

2012:  Young deep colour.  Some ripe spice on the nose, and on the palate youthful tannins, with elegant spicy fruit.  Medium weight.  Lovely fresh fruit, with balancing acidity and tannins.  Picked on 22nd September. 14.3˚

2010: includes 20% Syrah.  Picked on 21st September. 14.6 good colour.  Rounded black fruit, with the palate filling out, but always with firm peppery fruit, and structure.  Still very youthful .  The question of carbonic maceration was raised; they do some, but not for this wine, but for Clos des Lievres, their other red cuvée.

2009:  Pure Carignan, 14.9   A cold winter and a very wet April.  Very hot May; Cool nights during June and July and a hot dry August making for an early harvest.  Picked on 18th September.
Very deep colour.   Rounded ripe nose with red fruit.  Quite sturdy but ripe and fleshy.  Fresh tannins.  Red fruit on the nose.  Quite a different style from 2010.  Still very youthful and has evolved beautifully.


There was some discussion as to which wine we preferred, and the 2009 pure Carignan generally met with favour, prompting Andrew Jefford to observe:  'I wouldn’t pollute the Carignan with other things'.   I couldn't possibly disagree.  And the wines are all still very young so please could we reconvene in five or ten years’ time to see how they are doing? 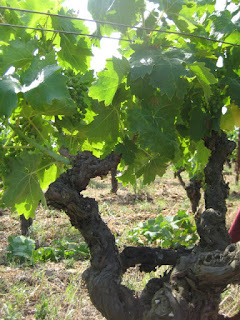 Graham said…
Thank you for sharing this, a distant next best thing to being there. I have a set of Carignan Blanc back to 2010 so at some stage at least half the tasting can be repeated.