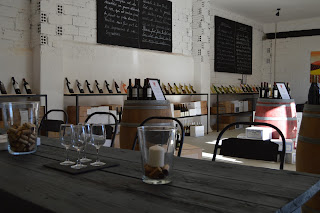 A group of friends met at Le Wine Shop in Pézenas for a chocolate and wine tasting.   Chocolate and wine are notoriously difficult to pair, but Dom George and Emmanuel Servant, a maitre chocolatier based in Marseillan, were up to the challenge.  Emmanuel simply said to Dom: Give me the wines, and I’ll make a chocolate to go with each of them, and that is  just what he did.

It proved to be a fascinating and highly instructive tasting, and great fun, not least  for overturning some preconceived ideas.  I had thought red wine usually went pretty well with chocolate, with a streak of tannin balancing the dark chocolate, and some of vin doux, old Rivesaltes or Banyuls would be good too.

But first Dom gave us some background information.  I had no idea that you could talk about terroir in association with chocolate, and that soil matters, and also aspect.  Drainage is important too.  Most chocolate is produced between 10⁰N and 10⁰S of the Equator.    About three quarters of the world’s chocolate production comes from West Africa, the Ivory Coast and Ghana, whereas the best chocolate originates from Central and South America, notably Ecuador.  And the production of chocolate also entails a fermentation process.  This is not the place for the precise production details, but it was fascinating to realise quite what a complicated process fine chocolate entails.

The first preconceived idea was overthrown with the first wine.  Who would have thought of pairing chocolate with Chardonnay?   But it worked!   First taste the wine, said Dom, as the flavour of the chocolate is ten times more powerful than the more ethereal flavour of a wine..   2014 Chardonnay from Domaine de Grézan was lightly rounded and buttery with some soft acidity, and the creaminess of ganache of dark and milk chocolate perfectly complimented the creaminess of the chocolate, with the a touch of green aniseed providing a lift on the finish.

Next came 2014 Picpoul Noir from Domaine de la Grangette, paired with palet d’or, a blend of dark and milk chocolate.   The wine had a bright young red colour, with fresh fruit.  It was lightly chilled with some acidity and a little tannin, and here the freshness counterbalanced the creaminess of the chocolate in a very satisfying way.

Domaine de la Clapiere, 2013 Etincelle,  a blend of 60% Chardonnay, 30% Viognier and 10% Petit Manseng was paired with a disc of Ariba, a dark chocolate from a single plantation in Ecuador.  The wine was quite rounded and peachy, with some perfume and acidity, and a touch of spice which complimented the spiciness in the wine. Again another surprise of white wine going with dark chocolate.

2013 Domaine des Arbournières, Syrah, from a new estate in Roujan was quite tannic, with some vanilla sweetness on the finish, and maybe a bit too tannic for the ganache infused with pain d’épice spices.  The idea was that the spices in the chocolate would complement the spice in the wine, but possibly the wine was a little too chilled.

Domaine des Amiels, 2014 Rosé des Gonzesses, a blend of Carignan, Syrah and Grenache, was paired with a Maralumi milk chocolate from Venezuela.   The wine was rather difficult, a vivid pink colour with fresh acidity and raspberry fruit; it is natural and unfiltered, with some sugar left as the Grenache did not finish fermenting.  The chocolate was soft and creamy with a hint of coffee on the finish and the two seemed to argue with each other.

The final wine came from Clos Mathélisse, a new name for me and was their  2013 l’Autre Vendange, a late harvest Roussanne.  The grapes are dried on the vines, passerillé, with the stem of each bunch twisted, to break and the result is simply delicious, with dry honey on the nose, and even more on the palate, with some ripe apricot fruit and walnuts balanced with and very good acidity.   It did not taste 14.5⁰.

It accompanied two chocolates.  First came a non-deodorised white chocolate.  The odour has been removed and the flavour was strong and buttery; the fat of the white chocolate lasts in the mouth and complimented the wine.  Next came a dark chocolate flavoured with confit ginger.  The chocolate was absolutely delicious and it went brilliantly with the wine, with the flavour of the wine emphasising the ginger, or vice versa.  It was all in perfect balance and delicious note on which to finish.     And yet another preconception overthrown.

Emmanuel Servant has a shop in the industrial estate of Marseillan, but fortunately from September Dom will also be selling his chocolate at Le Wine Shop.
Email Post

AlanM said…
I missed out on the trial of this tasting as we went back to the UK for a few weeks but can heartily recommend the cheese and wine pairing too. Dominic is always a fount of knowledge, great host. I must look out for the chocolate shop, yet another excuse to visit Marseillan.

Mathélisse is one of a group of very exciting natural producers currently bringing Aspiran to prominence in the area. David Caer is a serious and enthusiastic winemaker and along with Régis/Christine Pichon at Ribiera, Grégory White and Christelle Duffours at Mas Troqué they are making some really interesting wines.
30 August 2015 at 16:42

ishikavarma said…
Every person's own words tell how much a good person he is and by writing his words inside this post, you have told how good and promising you are because this post is very beautiful as well as very easy to read. that's good.
call girls in gurugram
noida escorts
Apologizing to friends
Gurugram Russian Escorts
21 October 2020 at 17:10

Escort Service In Delhi said…
Escort girls in Delhi make independent Brahma; Delhi call girls are always ready to serve you for interested people. Call girls in Delhi have been placed in many categories. Surely we are available according to you, you can come on our website and contact us. Female Escort In Delhi
24 March 2021 at 09:56

Brooke Morris said…
I think the timings for liquor stores are fine, you can always get liquor delivery to your doorstep even if the store is closed.
10 November 2021 at 14:52