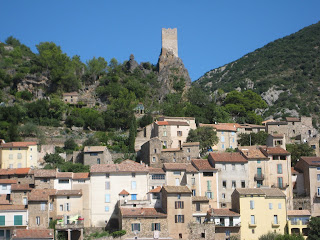 The village of Roquebrun gives its name to one of the crus of St. Chinian, but as I found on a day spent in the village visiting four of the vignerons independents, no one apart from the coop seems to mention Roquebrun on their labels!   And they make some delicious wine.

It was harvest time, but Nelly Belot who runs the syndicat of St. Chinian had managed to organise some appointments for us.  First stop was Domaine Marquise des Mûres, with Jean-Jacques Mailhac.  We arrived just as he was finishing running off a vat, and was able to take a break from the grape juice.   First question: why Marquise des Mûres, which elicited a story.  Par provocation, he said.  His father was president of the coop of Roquebrun in the 1980s, but Jean-Jacques preferred to take his vineyards out of the coop.  He laughingly observed that the moment someone has a small shed in the vines, they immediately call it a château, even if it is no more than a hut.   And the real aristocracy of the region used to be the shepherds, who used to bring their sheep, and goats to tidy up the vegetation on the edge of the vineyards, including all the brambles, which produced blackberries.  And he had known the daughter of the last shepherd of the village, and leads to Marquise des Mûres, the marchioness of the blackberries! 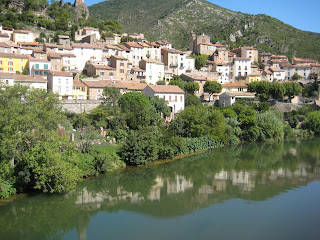 Jean-Jacques’s first vintage was 1992; he sold 1990 and 1991 to the négoce, but that was not what he had left the coop for.   He now has 15 hectares of vines, all in Roquebrun, planted with the usual red varieties, but not Mourvèdre as it is too temperamental, and for white he has Sauvignon Blanc, as well as Viognier, Vermentino and Roussanne.    He is self-taught or has learnt from his father and his oenologists, first Jean Natoli, and now François Pennequin.  Essentially his vineyards are in three large plots – it is difficult being organic if you have neighbours, so he has conducted a policy of restructuration.    And asked about the tipicity of Roquebrun, he replied that St Chinian is complicated, there is schist and limestone. The best soil is quite deep, but poor – the same vein of schist runs towards Berlou, but the depth of the soil varies. The real tipicity comes from a terroir sans produits chimiques.

At the beginning of September he was optimistic about the harvest, ‘provided it doesn’t rain’.  And it didn't, too much.  The north wind and the cool nights are good.  He began on 24th August with Sauvignon, then rosé, and started reds on 7th September. 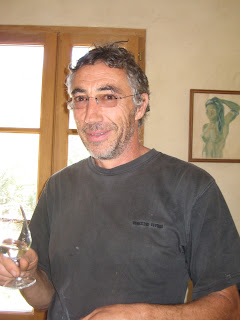 2014 Nasaara, Vin de France – 7.10€
What the name mean?  Another story.  He visited Burkina Faso with a friend in 2007, who was working on a charitable project with schools in the country –and he noticed people kept saying Nasaara, which simply means white.  Hence the name, and he has given a percentage of his profits to the project.   As for the wine which is a blend of Sauvignon, Roussanne and a little Viognier, it has quite a rich honeyed nose, with a touch of peachy fruit from the Viognier and an appealing textured palate, with some fruit and acidity.  And a slightly bitter touch on the finish.  The vineyard of Sauvignon is by the river and the land is not in the appellation,.

2013 Les Filles de la Guinguette, Vin de France – 5.00€
A blend of Cinsaut, Carignan and Marselan.  Another story,  about enlisting the help of friends for a tasting to decide on the blend for a refreshing easy to drink red wine.  All the girls liked the same wine, and their names are on the label.  And the wine is indeed eminently drinking with red fruit and supple tannins. Serve it slightly chilled.

2013 Lou Carignan, Vin de France – 7.10€
His natural wine, so no sulphur in the wine, but maybe some in the vineyard if there are problems with oidium.  He starts the fermentation by carbonic maceration and then destems the grapes and finishes the fermentation.  And from just one vineyard, a hectare of 50 year old vines.  Fresh cherry fruit, with rounded fruit on the palate, with a fresh streak of tannin and a mineral note.  Medium weight.

2011 Métis, St Chinian – 7.10€
A marriage of four grape varieties, Cinsaut, Grenache, Carignan and Syrah and two terroirs, schist and gravel – hence a métis.  No fining or filtering and just a little S02 and a minimum of two winters, if not three in vat. but no wood.  The cool cellar encourages the wine to deposit naturally.  Quite a powerful spicy nose and on the palate.  Some notes of orange and red fruit, supple tannins,  acidity and spice.  Quite harmonious.

2010 les Sagnes, St. Chinian. – 10.40€
Sagness is a lieu-dit.  Asked about Roquebrun ; Jean-Jacques doesn’t bother with it.  'C’est fou  ça; it’s for the shelf stickers in the supermarkets.  There’s no difference between Roquebrun and Berlou.  It’s all the same soil'. So a blend of Syrah, Grenache and Carignan.    25% aged in wood, but two or three years old.   Medium colour.  Quite a firm nose with a hint of oak; a more structured palate, but with appealing red fruit and spice.  Quite an elegant finish.

2009 Réserves des Marquises, St. Chinian – 19.90€
It is for this wine that Jean-Jacques buys the two new demi-muids each year, making one barrel of Syrah and one of Grenache and Carignan.  They are given a week of carbonic maceration and then destemmed and put into the barrels, without their tops, so that the grapes can be punched down or (pigé ).  Once they are pressed, the tops are put on the barrels, and the barrels are filled, and the wine is given two years élevage, and then blended and then spends another one or two years in vat.
Ideally the wine should be opened in advance.  Deep colour.  Firms structured nose, with some ripe fruit and good tannins on the palate.  Rich but balanced.  The vinification in wood helps to soften the wine.

And we finished with the rosé, as Jean-Jacques had forgotten about it earlier in our tasting:

2014 Métis rosé – 7.10€
Based on Cinsaut (pressed)  with some Syrah(saigné) and he is giving up using Grenache as it makes the colour turn orange.  Ripe and rounded, with some raspberry notes.  Jean-Jacques observed that rose is ‘the most complicated’ wine to make.

A fun visits with lots of ideas. 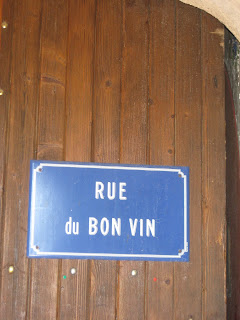