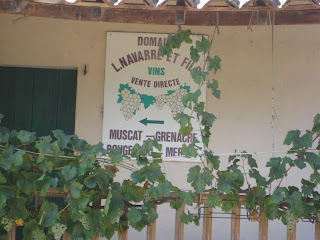 Thierry Navarre is just across the road from Domaine Marquise des Mures.  He is a great enthusiast of  the old forgotten grape varieties of the Languedoc, varieties like Ribeyrenc Noir and  Blanc, and even Gris, which disappeared after phylloxera.  I came away with a bottle of Oeillade, one of Ribeyrenc and one of Terret, all of which are wonderfully original, showing just why the Languedoc should reconsider the potential of these old varieties and  incorporate them  in the appellations.  Instead they are humble Vin de France.    Thierry feels very strongly that the diversity of the Languedoc has been seriously reduced and that this has a serious effect on agriculture and the environment. 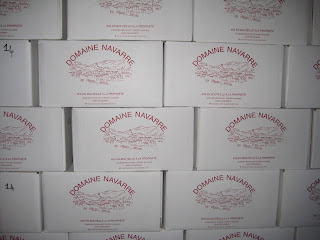 2014 Lignières blanc, Vin de France – 8.00€
A blend of Ribeyrenc Blanc, Clairette, and Grenache Gris, which is very much better than Grenache Blanc, which tends to be rather flat.   He obtained  the plants of Ribeyrenc from the INRA; you cannot buy them from a nursery.  Classic vinification; temperature controlled and all fermented together.   Quite a floral nose with white flowers and on the palate some mineral notes and some floral notes and fresh acidity on the finish.  ‘I wouldn’t plant Chardonnay’ observed Thierry; he feels that the vignerons ‘are ashamed on their region’ - that is why they plant international varieties rather than the old indigenous varieties of the region.

2014 Vin d’Oeillade, Vin de France.  7.00€
Œillade has the advantage of being ripe at 11.5˚     Some ripe fruit, but the bottle had been open a couple of days and was possibly a touch evolved on both nose and palate.   Carbonic maceration for 8 days.

2014 Ribeyrenc Rouge, Vin de France – 10.00€
Again a low alcohol of 11.5˚.  Quite light colour.  Bottled three weeks earlier.  Fresh cherry fruit.  A côté orange.  Fresh easy fruit.   There are only three vignerons with Ribeyrenc  in the whole of the Languedoc, namely Patricia Domergue at Clos Centeilles, François Henri in St. Georges d’Orques and Thierry.  Thierry has just 1.75 ha!  And two hectares of Oeillade.  He referred to Ribeyrenc as his baby.  Once upon a time the vineyards of the Languedoc essentially comprised one third Ribeyrenc, one third Oeillade and one third Picpoul.  Carignan and Grenache Noir arrived from Spain in the 19th century, and were planted after phylloxera.   Ribeyrenc must be grown up in the hills, never on the plain.  The nose has some light perfume, with a medium weight palate, with some fresh cherry fruit.  Very appealing.   He has also planted some Picpoul Noir – apparently there is a lieu-dit in Roquebrun called Picpoul. 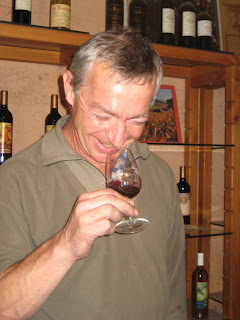 2013 St. Chinian Le Laouzil – 8.00€
Carignan, Grenache Noir and Syrah – Laouzil means schist in Occitan.  Destalked and given a three week maceration.  13.5˚.  Good spicy fruit on both nose and palate.  A medium weight  palate.  Very much an emphasis on fruit.  And then I noticed that all Thierry’s back labels says Tchin tchin, or cheers!  He has a nice sense of humour. 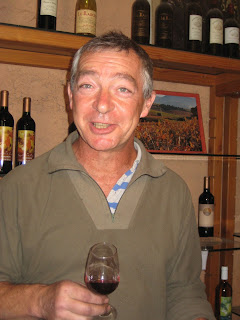 And then we deviated for a bit of history.  Thierry’s first vintage was 1988.  His family were never members of the coop.  His grandfather bottled wine in the 1960s, and sold Muscat and Grenache noir, vin doux, but with no added alcohol, as did most small vignerons at the time.  That was very much the tradition of the region, and Thierry feels it is a shame that the appellation does not remember this  old tradition for Grenache and Muscat. The grandfather also produced Vin Rouge, Carignan des Coteaux, which was initially sold en vrac and then he began to bottle it.  He also made white wine from Servant, which  can also be a table grape, which ripens very late.  And Thierry is dismissive of the cru of Roquebrun – that is for competitions, and they concentrate on Syrah, which is a stupidity – it comes out like encre de chine, or Indian ink.   The challenge is to produce fresh wine in a hot climate.

2012 La Conque, Vin de France - 10.00€
And then we moved onto Thierry’s other project,  a vineyard of just 1.30 hectares with  Syrah, Merlot and Cabernet Sauvignon, planted by friends up in the hills at 600 metres, at just about the highest point of the commune of Roquebrun.  La Conque is the name of the lieu-dit. The vineyard is surrounded by woods, with a three week delay in ripening, compared to the lower vineyards of Roquebrun.  The soil is clay rather than schist.  A complete change of key in the taste spectrum. Elegant dry cassis.  Medium weight.    Some tannins.  Very elegant finish.

They are building a cellar there now, for élevage, as it is so much cooler.  The wine makes itself slowly up there; the 2014 was just finishing its malolactic in September 2015.  Thierry uses a drop of s02 and that is all.  The pH is higher,  which helps keep the wine.   The Cabernet is aged in 500 litres new wood. 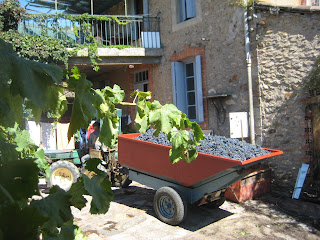 And then we tried 2013 Terret Gris, which is lightly orange in colour  - 8.00€  It is harvested and pressed;  the colour comes from the pulp.  It is not fermented on the skins, like the orange wines of Georgia.   The wine is very original – with some orange fruit, with a hint of honey and it is solid and rounded, with some citrus notes.  Textured and rich on the finish.

And the finale was Vin de Grenache – 12.00€
17˚.  Égrappé in vat, and then forget about it and let it macerate five or six days, and then press and chill to stop the fermentation.  Spends time in wood.   Red fruit, fig, dried fruits, some floral notes and slightly honeyed on the finish. 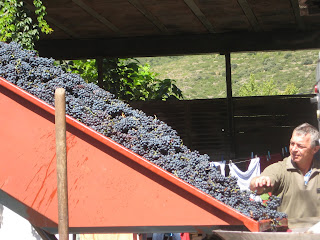 And then a tractor arrived, full of ripe healthy Syrah grapes, so we watched them being unloaded into the égrappoir and then headed to Les Cave St Martin for a spot of lunch, which for me was some delicious paté, with a really ripe tomato salad and a glass of Yannick Pelletier’s L'Oiselet.  I was amused to see that the menu for the charcuterie proclaimed assiette de jambon,  cochon heureux! 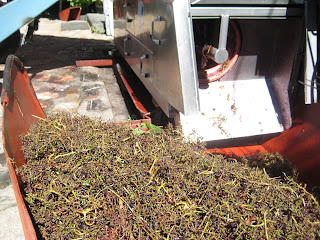 AlanM said…
Thierry is a lovely man making terrific wines, the embodiment of the Languedoc.